Superman’s Pal Jimmy Olsen #1 (of 12): The Silver Age and the Art of Being Jimmy Olsen 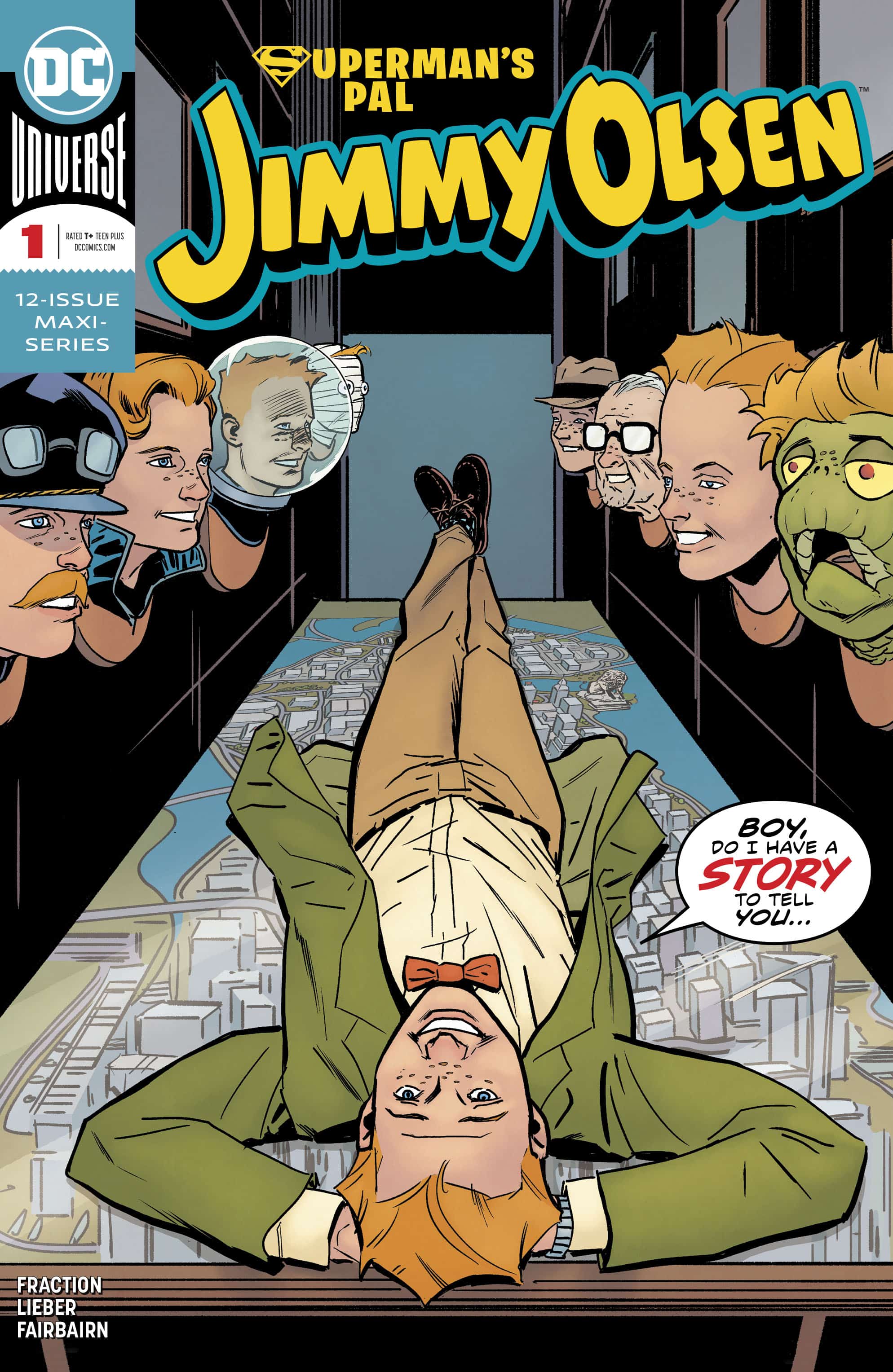 Superman's pal, Jimmy Olsen, is BACK! And you know what THAT means... wacky Silver Age shenanigans! 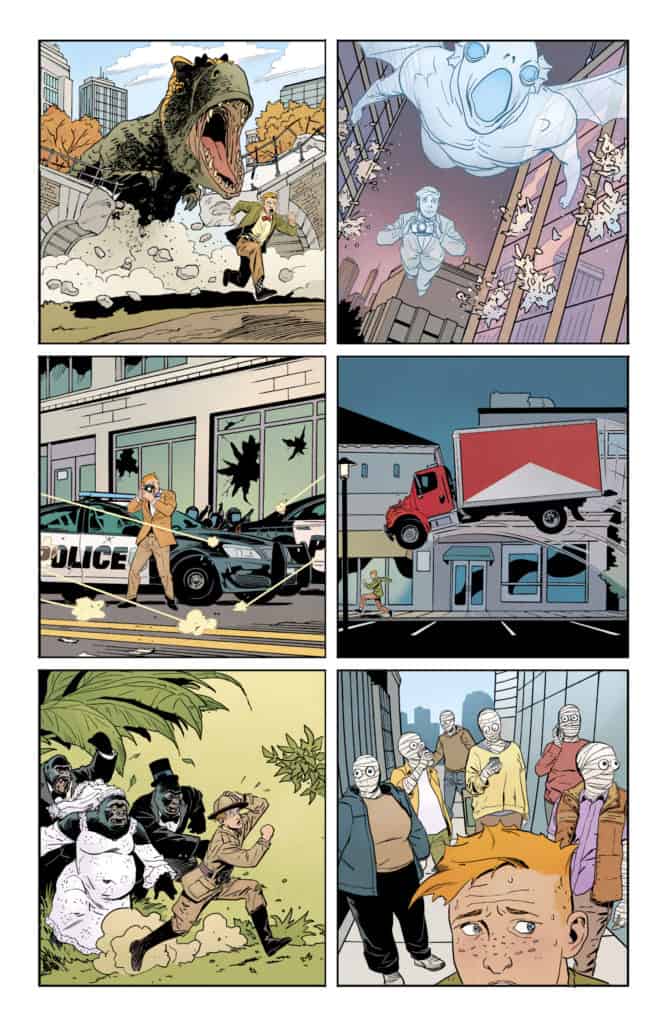 But can even the famed Jimmy Olsen survive... mandatory relocation?

For awhile now, DC has had something of a Jimmy Olsen problem. Like, since at least 1986, though I could argue since as far back as 1970. But more on that in a minute.

Today, in the Year of Our Lord 2019, DC has seen fit to bestow upon an unsuspecting readership a new Jimmy Olsen title, his first solo gig since 2003’s Superman: Metropolis (aside from the stray one-shot), which didn’t even have his name in the title even though he was the main character. Talk about a snub.

Which begs the question: What is it about Jimmy Olsen that makes him so hard for DC to get into print, despite the fact that he’s been around almost as long as his famous pal Superman, but also had his own long-running series that pretty much defined the Silver Age DC ethos?

Pretty much from the jump, Jimmy Olsen has existed as a kind of foil for Superman – but the kind of foil kids would want to be. He didn’t just get into danger and have to be rescued (although there was plenty of that), he got to actually hang out with Superman. What kid wouldn’t want that? And, given the era in which the lion’s share of those style of Jimmy stories were written – the ‘50s and ‘60s, when DC firmly believed that comics were for eight-year-olds boys only – it’s only logical that the poor guy gets (unfairly) lumped into that mode of comics storytelling and dismissed by all of us fancy-pants, mustache-twirling, post-Moore-and-Morrison too-hip-for-our-own-good comics fans.

So as comicdom – and DC in particular during the ‘80s – fought kicking and screaming to grow up, Superman changed (courtesy equally loved and loathed industry legend/cautionary tale John Byrne), and so too did his world, very much including Jimmy. Crisis induced the labor of a more modernly-sensibled DCU, and with it, Superman was de-powered and brought a bit closer down to Earth in order to make him more relatable and grounded. But in doing so, he really didn’t need a surrogate character for readers to impress upon to get their vicarious Superman thrills. Furthermore – all things being equal, there isn’t much in terms of interpersonal relationships with Superman that Jimmy does that Lois Lane doesn’t do better. So Jimmy got the short end of the stick post-Crisis.

But at the same time, Jimmy couldn’t just go away. He was an established part of Superman’s mythos, and so, DC clung to him somewhat grudgingly, and almost by default never quite knew what to do with him. He was Turtle-Boy on TV for a while (a fairly obvious nod to some of his Silver Age wackiness), got into random adventures, but other than that was sort of just… there. (“Jimmy Olsen! Can’t live with ‘im! Can’t viciously kill ‘im off!”) He didn’t languish, exactly, but sort of just became part of the de rigueur Superman scenery.

This wasn’t really a new problem, though. As far back as 1970 (told you I’d get back to that), Jimmy was more and more marginalized. Jack Kirby famously “Took over [DC’s] worst-selling book and made it their best!” as part of his Fourth World saga. But anyone who’s read it can immediately tell you, Jimmy is second-fiddle to Superman, the Newsboy Legion, and Kirby’s signature Big Ideas – basically a guest-star in his own comic. And while of course Kirby’s tenure was infamously short-lived, the message was clear: The Silver Age is over, and you can take your wacky hijinks with you, Mr. Olsen.

Those wacky hijinks, though – so maligned for their cheesiness and treated by fans and DC editorial alike for so long – are an intrinsic part of Jimmy’s character. That’s why DC has struggled for so long to figure out what to do with him, especially during periods when they saw fit to run as far and wide as possible from anything even remotely resembling anything other than “serious” comics. It’s one thing to say he’s Superman’s pal, but other to make him distinct in any other way – but that distinction comes in his past, not in any effort to bury the same out of embarrassment. Jimmy Olsen is absolutely the poster child for DC’s Silver Age insanity, and to try to have it any other way does the character a disservice. (As an aside, I’d argue that having the character’s circumstances change radically and in unexpected ways each season is one of the truest-to-comics things TV’s Supergirl does for “James” Olsen.)

Which brings us back to 2019, and a comic market that couldn’t be more different than 1970 or 1986 or even just a few years ago. The Big Two are making a more concentrated effort to offer fans niche books that don’t fit into the more rigidly-defined world of superhero-punch-‘em-outs, and Matt Fraction and Steve Lieber’s Superman’s Pal Jimmy Olsen #1 fits that mentality to a tee. Fraction has long made a career of being so quirky it sometimes hurts, and Steve Lieber earned his stripes on the criminally underappreciated Superior Foes of Spider-Man. Together, they make an inspired creative team pairing for giving a modern voice to Jimmy’s Silver Age madness. Jimmy Olsen can’t help but stand out from the pack on the shelves by sheer virtue of its pedigree.

The results, though, fall a bit short of their ambitions. The more flagrant nods to the Silver Age are mandatory and appreciated, but Fraction is going far out of his way to make sure he hits! You! OVER! THE HEAD WITH IT!!. That’s obviously the point, but something about how blunt an instrument Fraction uses it as makes it occasionally akin to petting a cat backwards with a belt sander. Fun, but loud and obnoxious.* And that’s definitely a trait to this writing that readers are either going to hate or love, with very little ground in between.

Fraction, though, is so in love with his own writerly cuteness that it feels like he’s checking boxes off of a list rather than fleshing out the plot. “Jimmy in space? Check! Jimmy turning into a giant turtle? Check! Jimmy being saved by Superman? Check!” It’s not necessarily poorly-written per se, but similar to Greg Rucka’s recent Lois Lane, the first issue here feels more like it’s setting the table rather than serving a whole meal. And that in and of itself is somewhat to be expected in a first issue of twelve – gotta fill the next eleven with something, right? – but surely a little more meat on the bone could have been had. As it stands, the plot so far is that Jimmy gets reassigned outside of Metropolis because his misadventures pose a crippling insurance risk to the Daily Planet, yet his livestreams are also the only thing the paper is doing that’s making any money. So Perry White and the Planet’s owner send Jimmy far, far away (to Gotham City, to be exact) to keep doing what he does best, just not in Metropolis. Clever, but well… suffice to say, I got to the end of the issue and my first thought was, “Wait, that’s it?”

Superman’s Pal Jimmy Olsen winds up being fun, but too high on its own cleverness by half and less than invested in telling a story than on telling you how QUIRKY it is. It gives readers the set-up, but that’s about it. Objectively speaking, if this were a comic about anyone other than Jimmy – and all his Silver Age trappings – I’d give it a much lower score. But I have to give Fraction and Lieber credit for fearlessly putting Jimmy Olsen back in the milieu he belongs, but also props to DC for realizing it’s the right move for the character. And about time, too! Now, if the creative team can take the ingredients they’ve assembled and make something unique and worthy of the title character’s storied history, that will be when things get cooking. For now, I’m happy that if nothing else, Jimmy is getting his moment to shine again. He’s an important part not only of Superman’s never-ending saga and enduring legacy, but DC’s most potent symbol of their own history – gorilla weddings and all. Long may the Silver Age reign!

*No cats were harmed in the writing of this review. Comic Watch does not condone the application of belt sanders to cats.

Jimmy Olsen is back, and maybe a smidge too cutesy for his own good...but that's not necessarily the worst thing that could happen. What this book needs is a bit more story, and less forced quirkiness, and it will fire on all cylinders.

Superman’s Pal Jimmy Olsen #1 (of 12): The Silver Age and the Art of Being Jimmy Olsen