Superman’s Pal Jimmy Olsen #2 (of 12): The Most Dangerous Man in Metropolis! 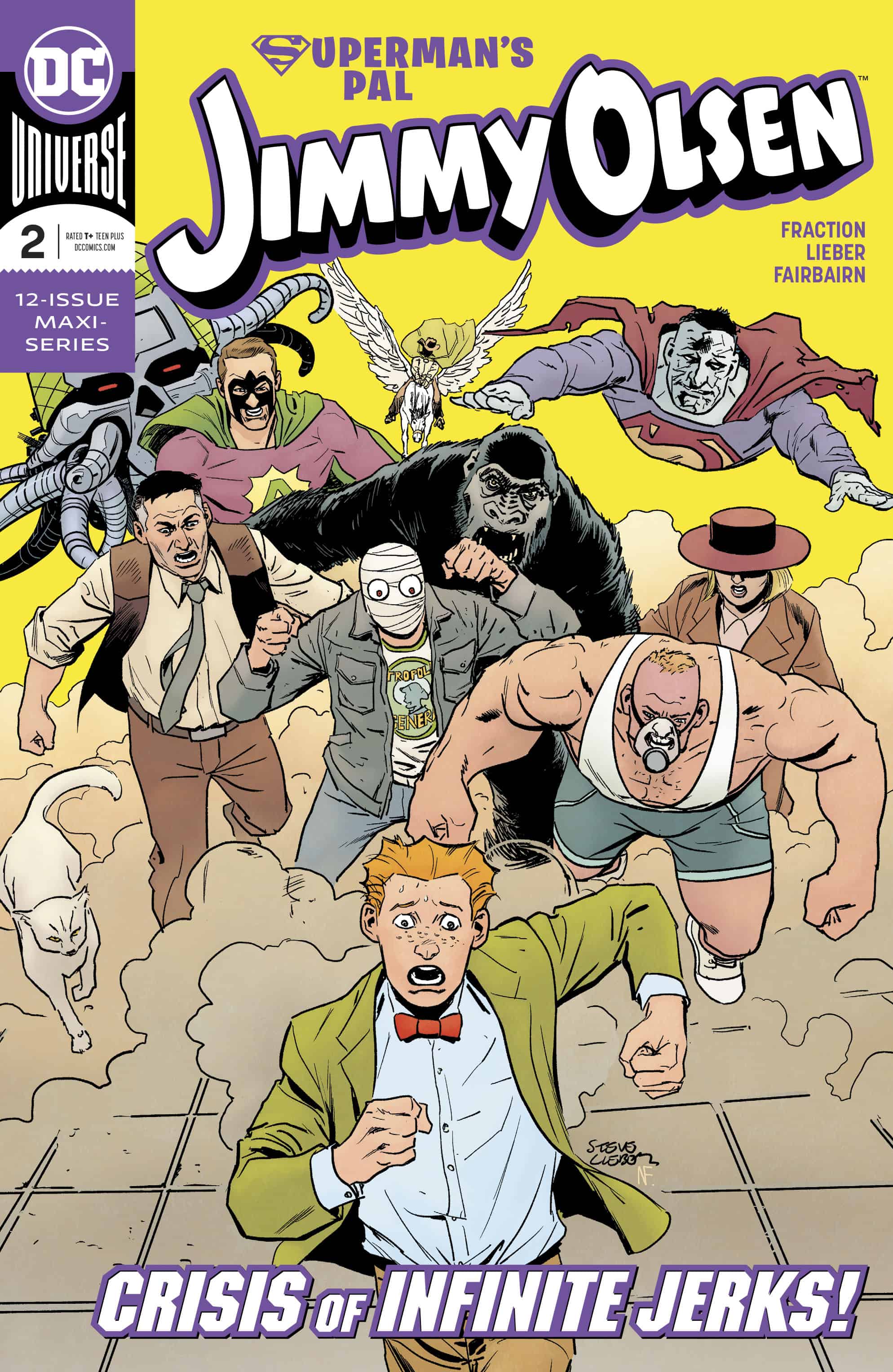 When you're Jimmy Olsen, life doesn't slow down for much! Not long-standing spats with older brothers... 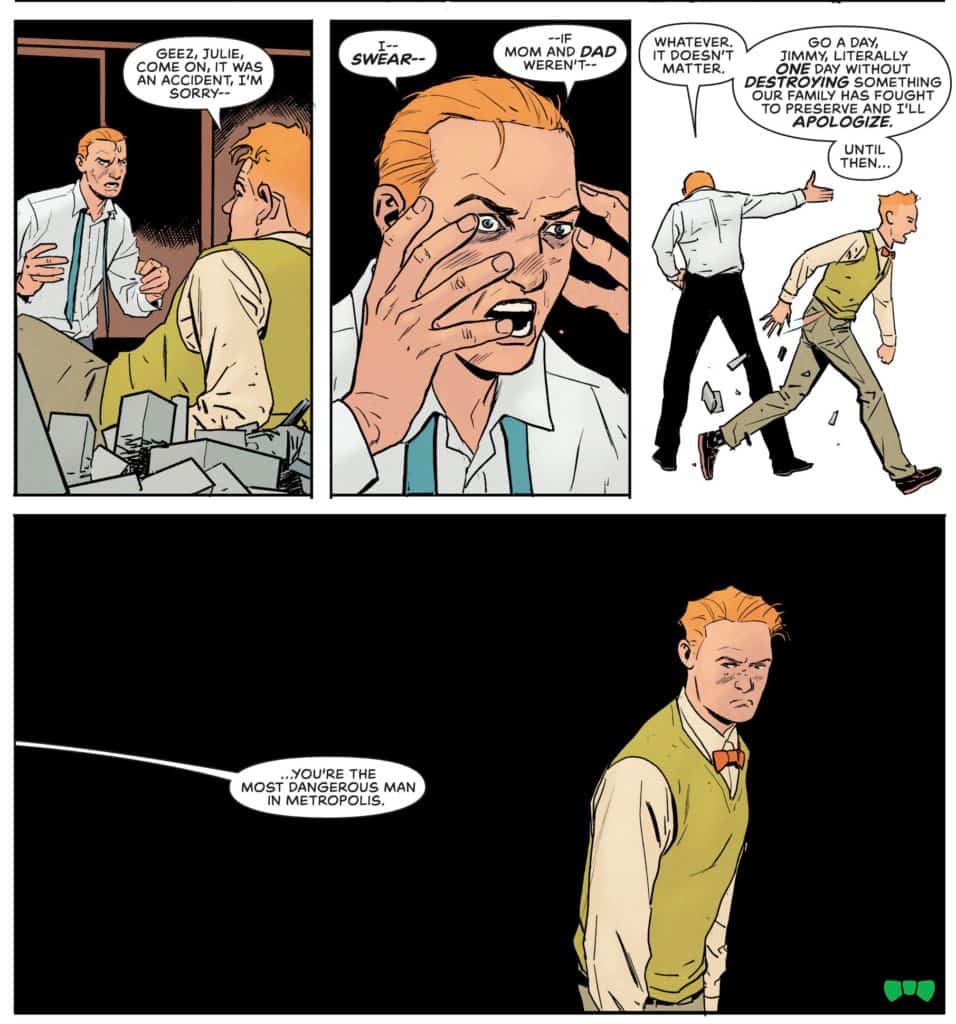 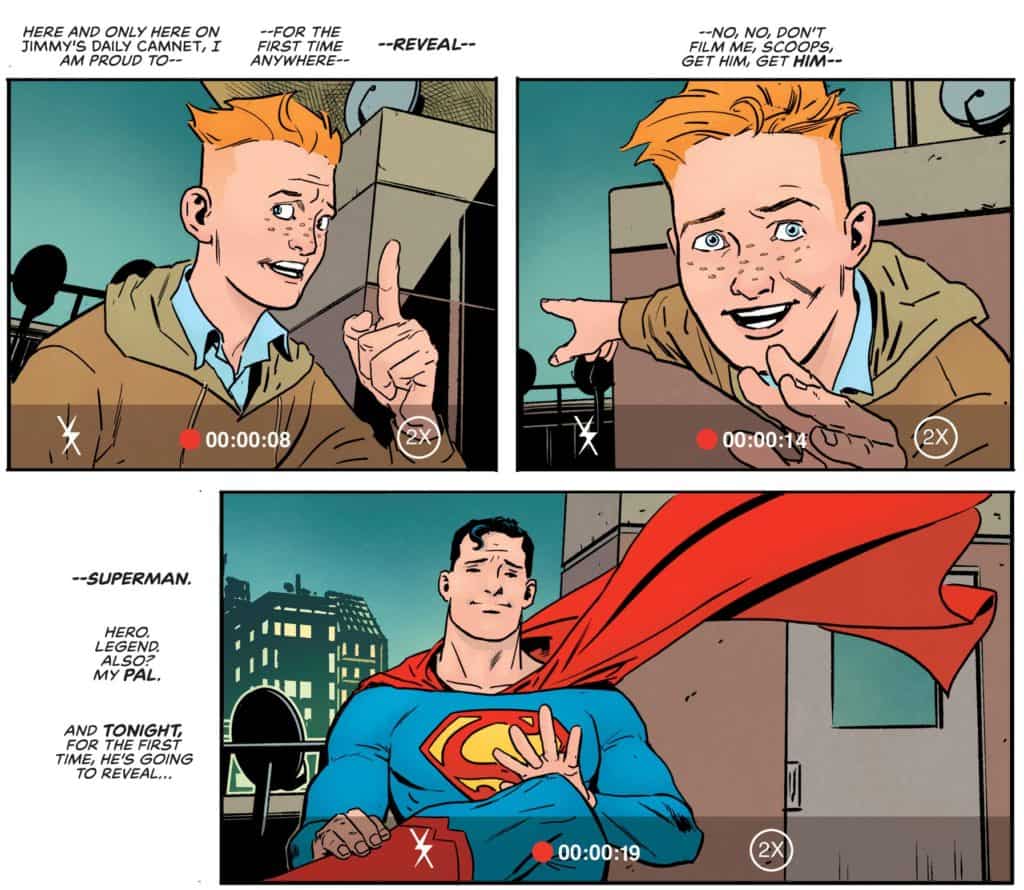 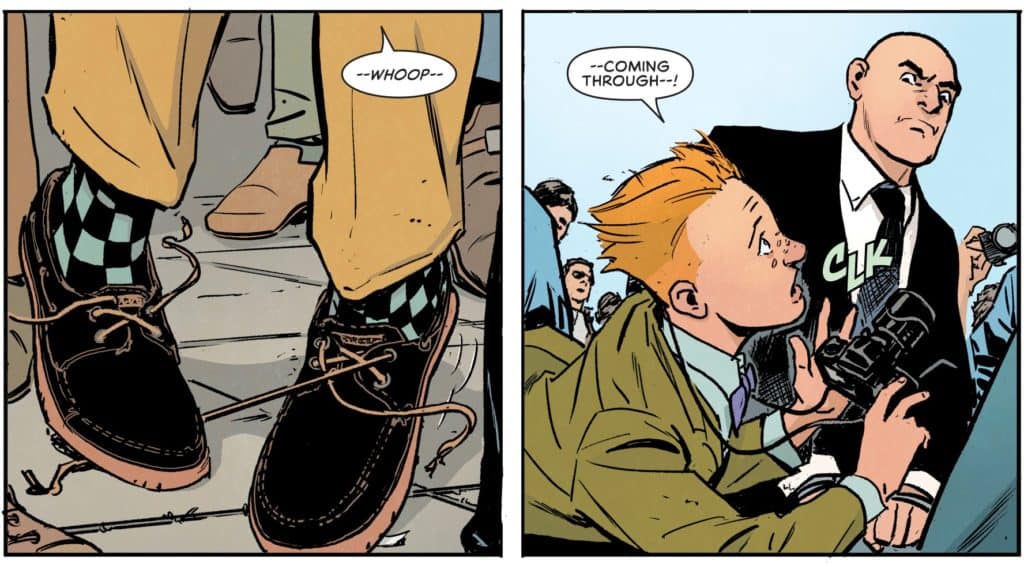 ...and getting exiled to Gotham City for being too much of an insurance liability! 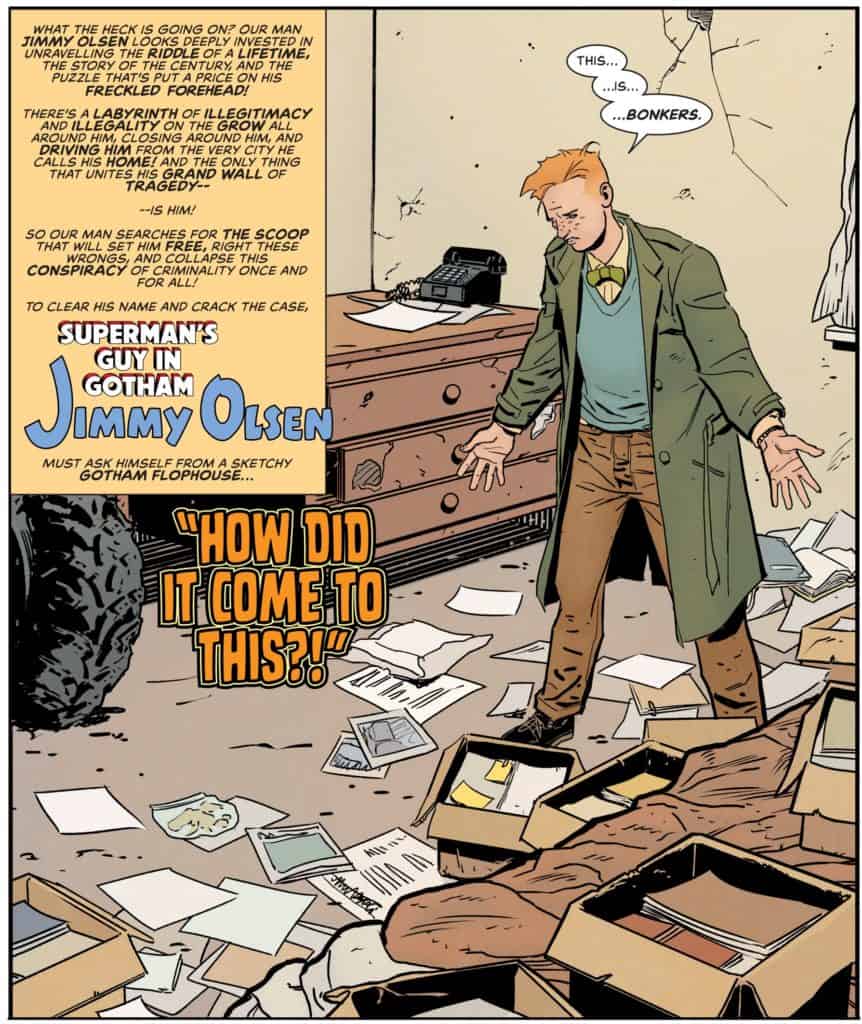 A mere two issues in, and Matt Fraction’s I’M SO QUIRKY IT HURTS writing style has officially worn out its welcome. Superman’s Pal Jimmy Olsen #2 is all over the place, bouncing from scene to scene with no sense of connectivity other than the eponymous lead. The scenes are just a hodgepodge of cutesy occurrences designed to convey just how bonkers Jimmy’s life is. And, well, it is: to have a crazy life is the Silver Age essence of Jimmy Olsen, hardwired into the character’s DNA. In short, it’s expected. But does it have to feel so contrived? So obligatory?

Worse, the issue literally goes nowhere, ending at the exact same point issue one concluded. Which means that at just its second installment, the story is already spinning its wheels with filler. Filler that in execution is an exact replica of the previous issue’s set up, right down to the two-page sequence of silent panels of wacky Jimmy Olsen Shenanigans (TM): 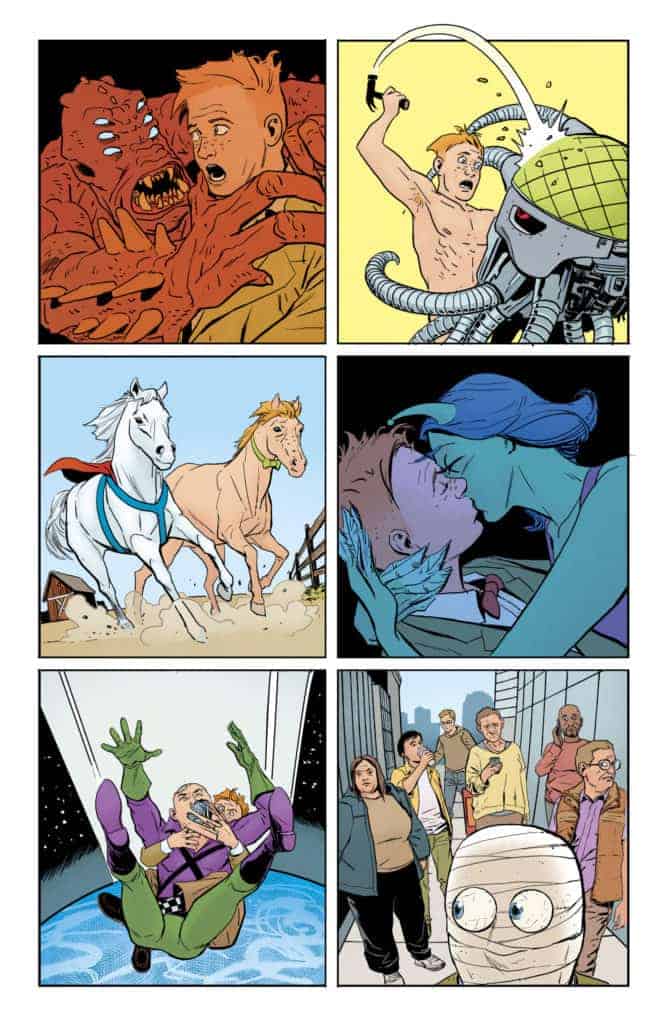 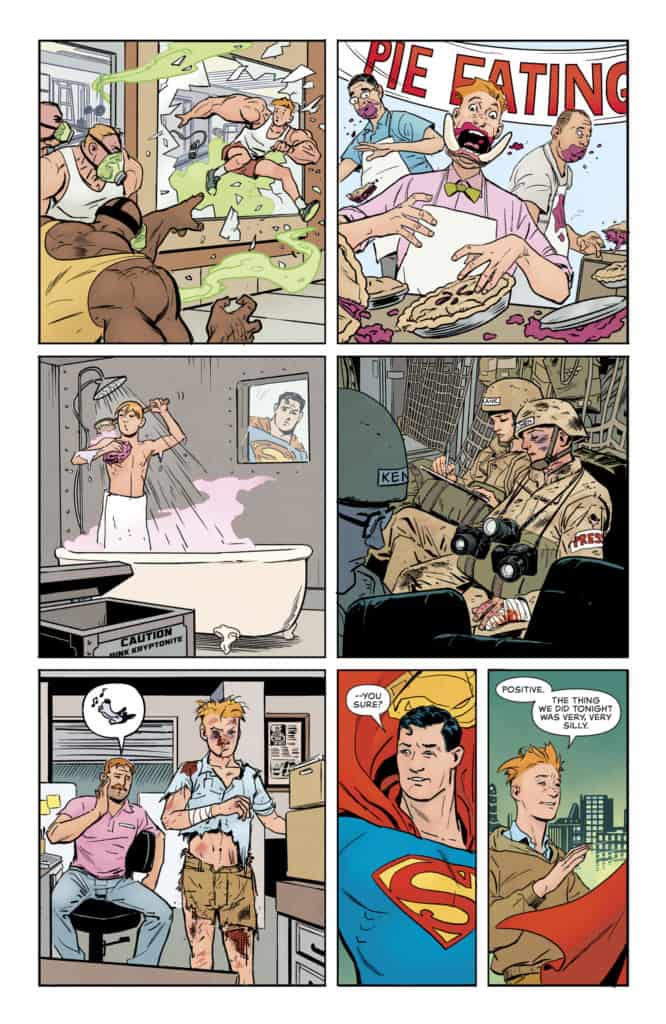 That’s all pretty silly, right? Sure is. Too bad we saw the exact same thing last issue.

There are interesting tidbits, that with some focus, might eventually turn into a decent story. I’m interested in Jimmy’s strained relationship with his brother, or their family history with the Luthors. I want to see how Jimmy doing his job contrasts in Gotham versus Metropolis, where he doesn’t have a Superman constantly around to get him out of trouble. Fraction gives us mere tastes of these potentially compelling plot points, but then careens into yet another farcical sequence involving nonsense instead.

I’m willing to tolerate any writer’s particular sensibilities as long as the story is there. But this isn’t a story. This is Matt Fraction and Steve Lieber’s equivalent of a juvenile inside joke between two old friends that no one else understands, much less finds funny. Least of all if it’s bull$&!% like this:

I think the above image speaks for itself. Editorial, thy time for an intervention is at hand.

Far too in love with itself and its own slapdash sense of humor to be taken seriously, this comic utilizes facile attempts at humor to hide the fact that it has no real plot. At only two issues in, this miniseries is already careening off the rails - which bodes very, very ill for the next ten months, and the remainder of this non-story.

Superman’s Pal Jimmy Olsen #2 (of 12): The Most Dangerous Man in Metropolis!