Damian’s mother has taken a contract to kill Jon’s mother! Will Superboy and Robin make it in time to save Lois and stop Talia? Find out in Super-Sons! 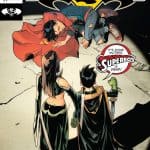 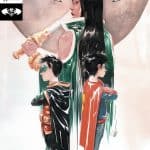 What You Need to Know:
The son of Superman and the son of Batman have joined forces as one of the world’s finest young duos! Together they have taken on aliens, traveled to other planets and even faced off against Lex Luthor! Their fathers have even supplied them with their own headquarters to run their operation out of, and together they have battled alongside the younger generation such as the Titans and Teen Titans against a Tim Drake Batman from the future.

Now Damian has discovered some secrets his mother has been keeping, while Jon realizes some pretty obvious things about Damian’s past. Will this corrupt their friendship, or will they be able to stop Talia and the League of Assassins before it’s too late?

What You’ll Find Out:
This issue opens up with Lois and her friend Chloe getting coffee while chatting about the underground war that Talia (and the new Silencer) are involved in. Lois asks about Tilden Troy when she gets a call from Jon. Jon and Damian are on a high-speed rescue mission to find Lois before Talia does, and they use the phone call to find her destination, thanks to Damian’s tech of course. 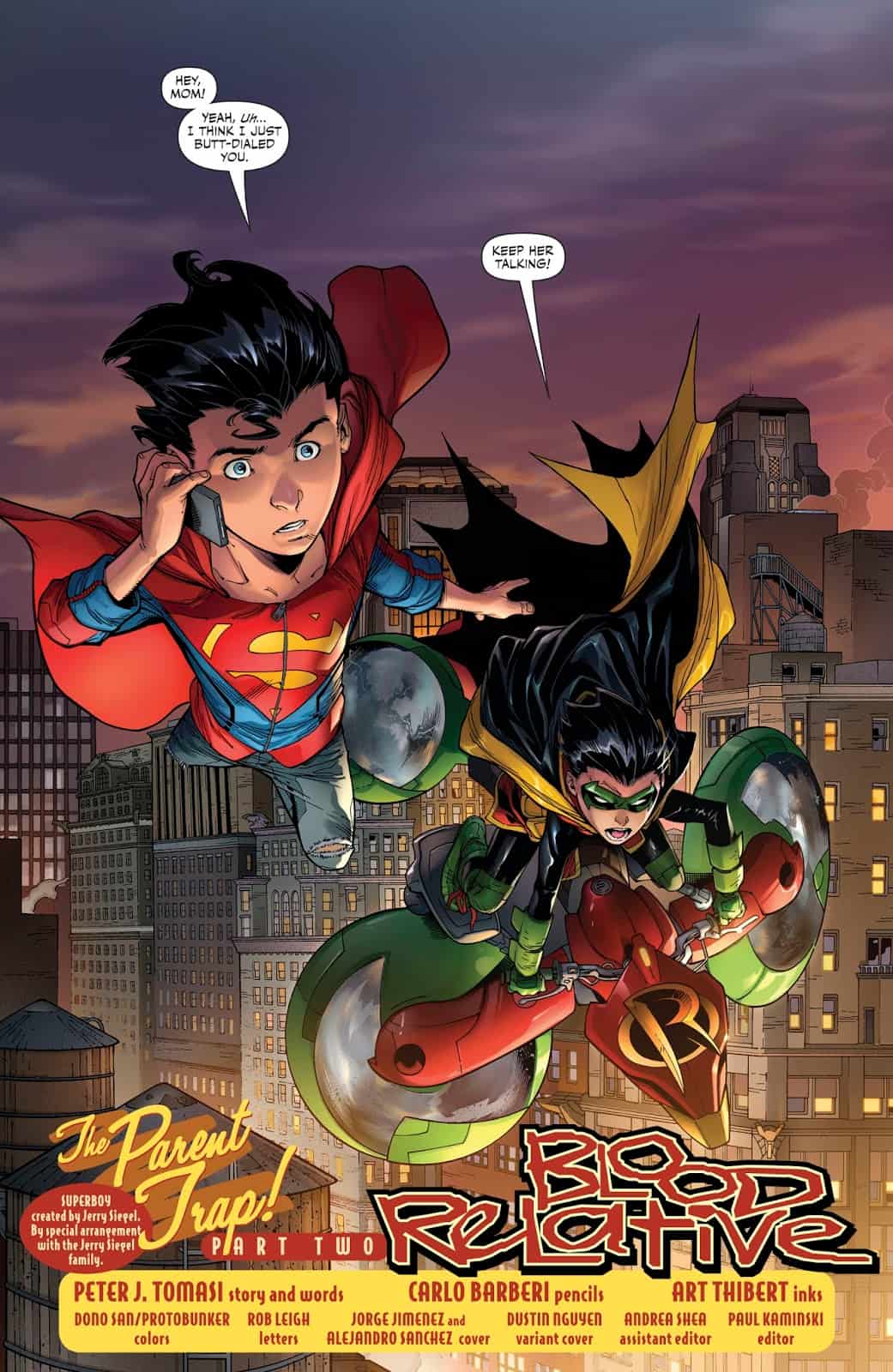 Talia has all but taken the shot on Lois when her inner dialogue kicks in. Talia seems almost jealous of the relationship that Damian and Bruce have found and while she tries to blame it on Damian’s “destiny” it really seems she just can’t let her son go. Talia finally takes the shot on Lois when Jon gets there in just the nick of time to catch the bullet at the same time that Damian kicks Talia in the face. 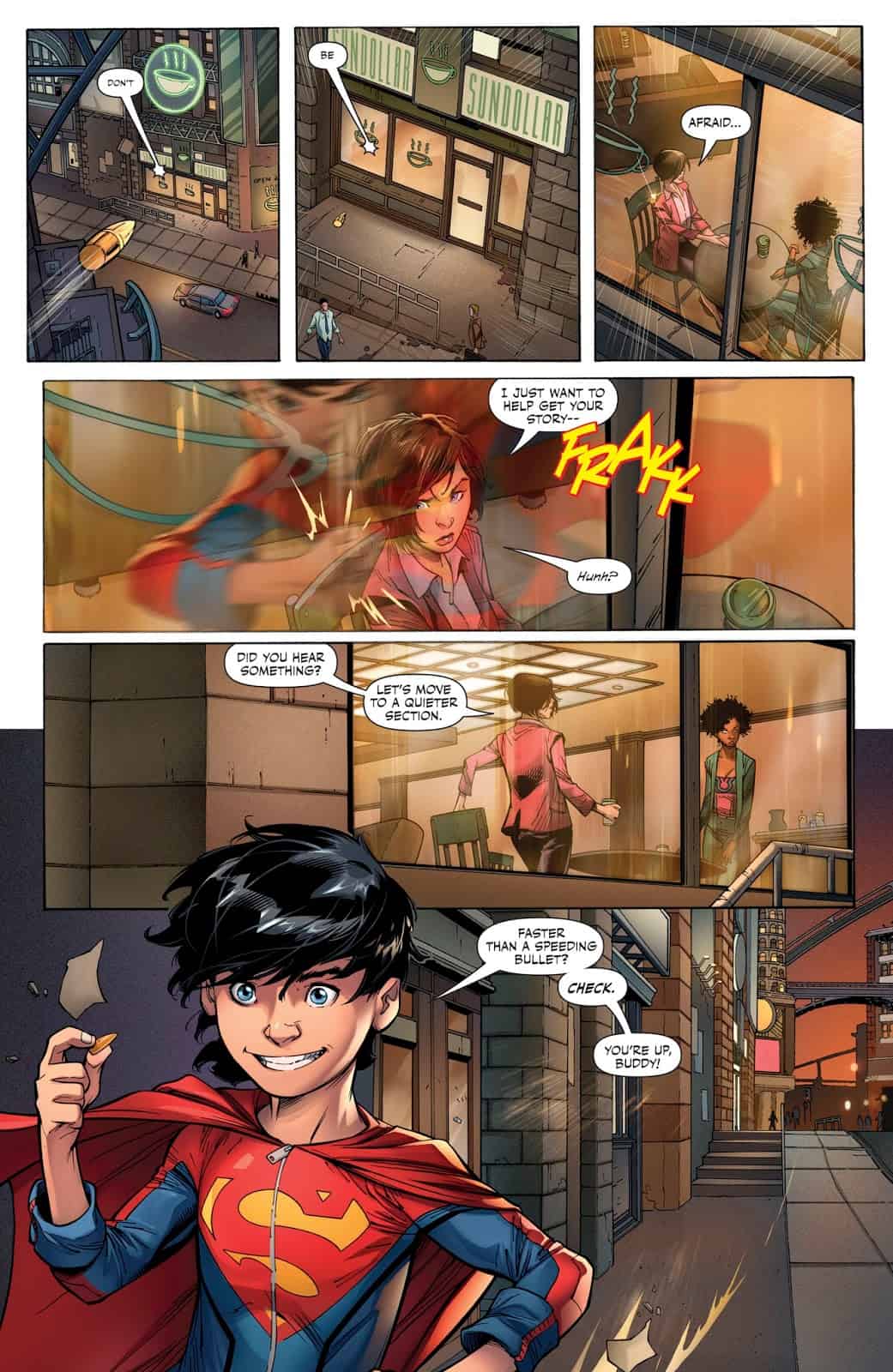 Damian and Talia spar off while talking about the “right choices” for Damian. Damian seems uninterested in her opinion as well as his father’s when talking about his future and even mentions how he now has friends that he won’t turn his back on. Talia monologues about how much of a “disappointment” Damian is and mocks his watered down bloodline. 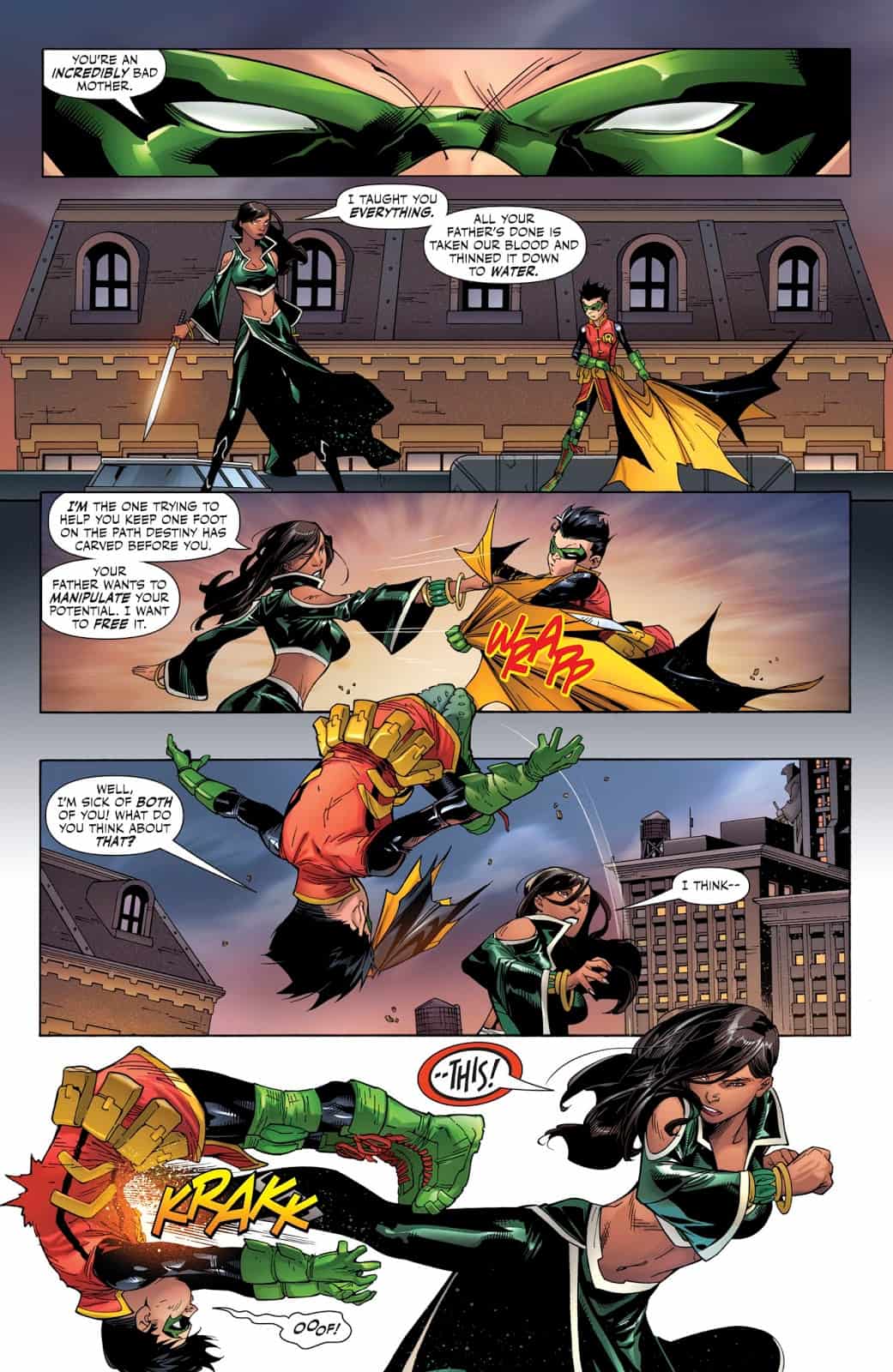 Jon gets attacked by League members while nearby pedestrians watch them attack a small boy! When the assassins go after the pedestrians Jon saves himself and them while also running into his mother. Lois plays it cool due to the company of her friend and acts like she doesn’t know Jon. She asks him a couple sarcastic questions and then wishing him good luck as they part ways. Jon, knowing he is in deep trouble when he gets home, rendezvous with Damian and drops the League members right on top of Talia. Damian lets Talia know that he has alerted his father and the GCPD about the events and gave her two minutes to leave and not come near Lois, or this part of his life, ever again.

Damian is unhappy with the visit from his mother and leaves in a hurry, then immediately comes back to explain some things to Jon. 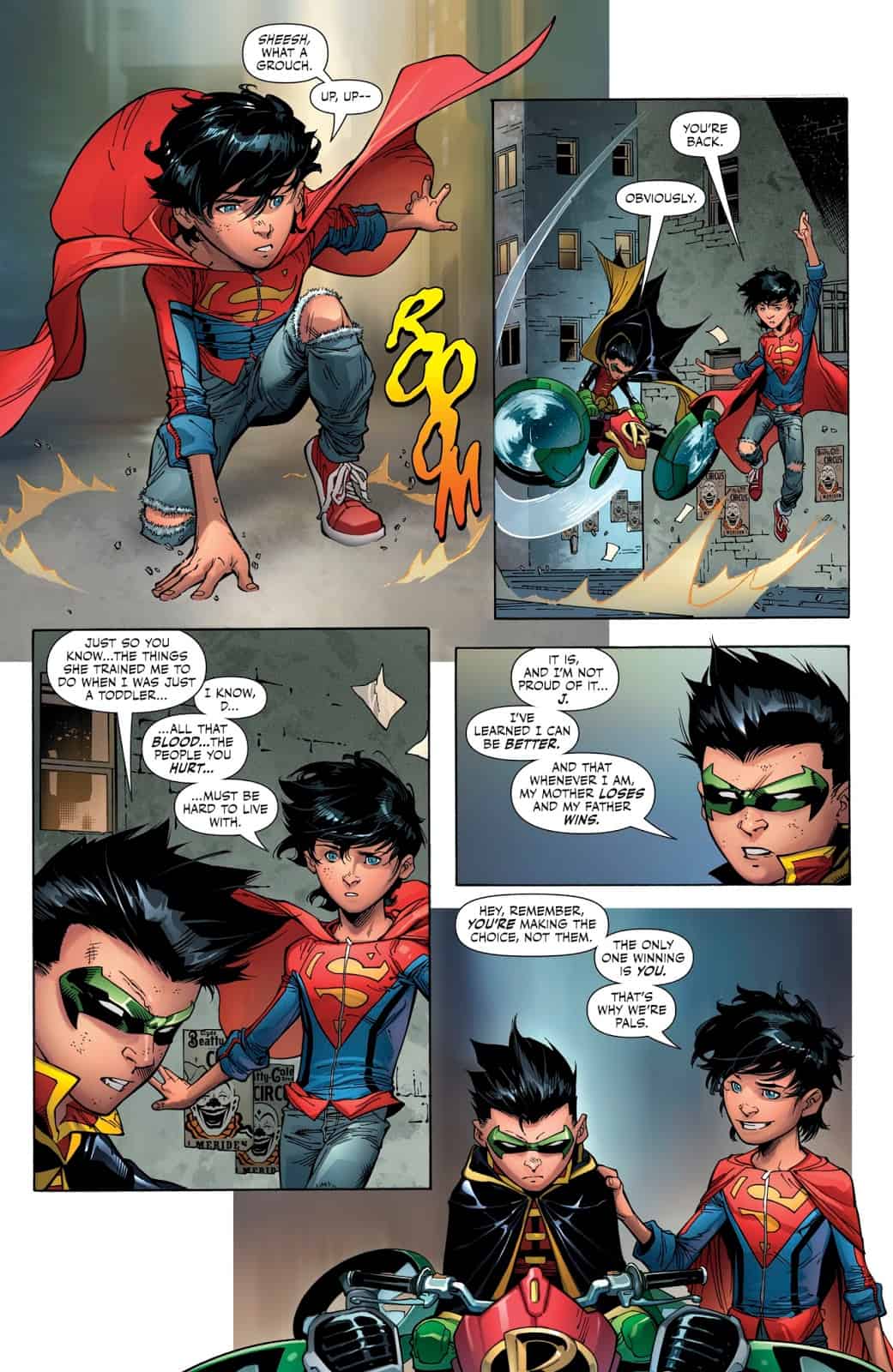 The issue closes out with that Damian and Jon chit-chatting with the same kind of dialogue that keeps me coming back to this title every month, as they leave Gotham and head off to their next adventure!

What Just Happened?
Peter Tomasi and the art crew keep drawing up gold with every issue of Super Sons! Peters stories and partner relationship continues to remind me of old Jeph Loeb “World’s Finest” stories and keep me coming back every month for a new fun and exciting issue. This two-issue story was a fun way to set up the characters in a different dynamic. Instead of relying on their fathers, or even going against their fathers’ wishes, they instead must race against the clock to stop one’s mother, and save the other’s. No expositional writing as most conversations seems very natural from character to character. Even Talias inner dialogue just consisted of her own self-pity and personal thoughts instead of just telling us what’s gonna happen as we see it. Even Talia’s monologue to Damian, while cliche, was fun and made her the easy to beat villain that some comics simply need.
Barberi and Thibert bring Gotham City to life in these last two issues as Jon and Damian are mostly seen up in the air. Damian’s gadgets and vehicles get to shine early on with his robin copter and tracking system that comes off as silver-ageish and very fun to read. My biggest issue with the art is the constant tear-drop shape I see for everyone’s head. This makes all the characters seem unoriginal and somewhat boring, to say the least. On the flip-side, this artistic team truly know how to bring these characters to life with action-filled art and great consistency. The heroes outfits aren’t overly flashy while still staying noticeable, and the orange and blue lighting transitions show the Gotham streetlight beautifully.

Rating: 9/10.
Final Thoughts: Super-Sons has continued to impress issue after issue with fun characters and great stories. The villains have been a mix of simple and complex with this two-issue story being a pretty down to earth one. Talia and Lois’ appearances make for a fun mother-son dynamic that anyone should enjoy, and just the boys chatting alone make this comic more enjoyable than most. I recommend this story to anyone looking for an easy two-parter to read, of course to anyone who is a fan of Jon Kent or Damian Wayne, and to any fans of the old Loeb “World’s Finest” stories.