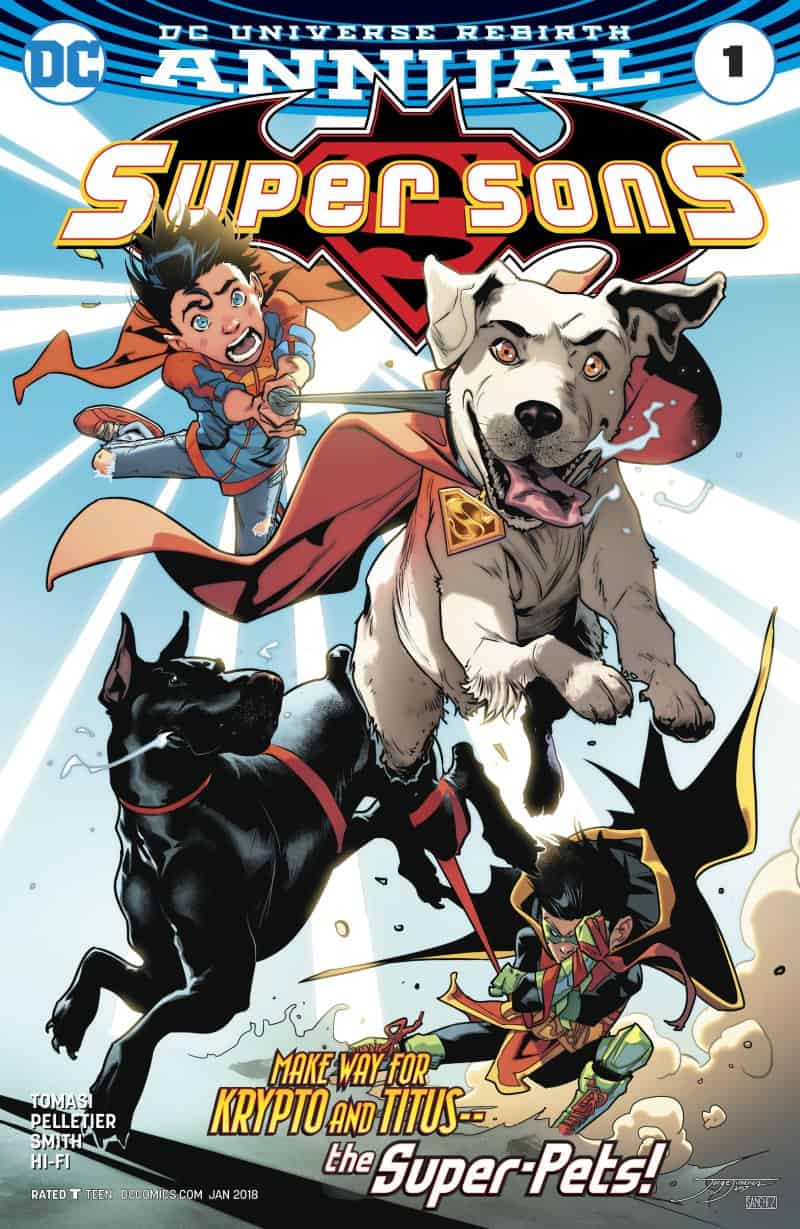 Damian Wayne and John Kent have a lot on their plate, while they are stopping bank robbers and making fun of each other another group of unlikely heroes step into the spotlight to take on a high priority mission. Led by Detective Chimp, Titus the Bat-Hound, Krypto the Super-Dog, Flexi the Plastic bird, Streaky the Super-Cat and Bat-Cow make up the Super-Pets and they have come to solve the mystery of the missing pets!

What You Need to Know:
Son’s of the world’s finest John Kent and Damian Wayne are the Super Sons. Together they have faced the likes of Kid Amazo and even Lex Luthor. They have been training with their fathers, Batman and Superman in order to become heroes like them one day (well maybe not Damian), but even Damian has a furry companion or two that he just couldn’t live without. Sometimes when the heroes are away fighting invasions and street robbers the pets step in to tackle the real challenges.

What You’ll Find Out:
Someone in Metropolis is stealing pets from unaware citizens by just snatching them up in broad daylight. On the other side of the city, our two heroes are stopping a couple bank robbers while at the same time cracking joke after joke at the expense of the other, normal everyday Superhero kid stuff. After John gets home he notices the reports of missing animals across the city but decides that’s a job for tomorrow because even Superboy needs a good night’s rest. Krypto, the Super-Dog of the Kent family, decides tomorrow won’t be soon enough so decides he will take matters into his own paws and flies away.

Krypto lands near the Wayne Manor where he decides to recruit a few old friends for his mission. First, he has a somewhat intimate conversation with the Bat-Cow.

Cow decides to wake Titus, Damian’s Bat-Hound, and when Krypto explains the situation no delay is taken as Bat-Cow signals that there’s someone else they must contact in order to successfully save the missing pets. 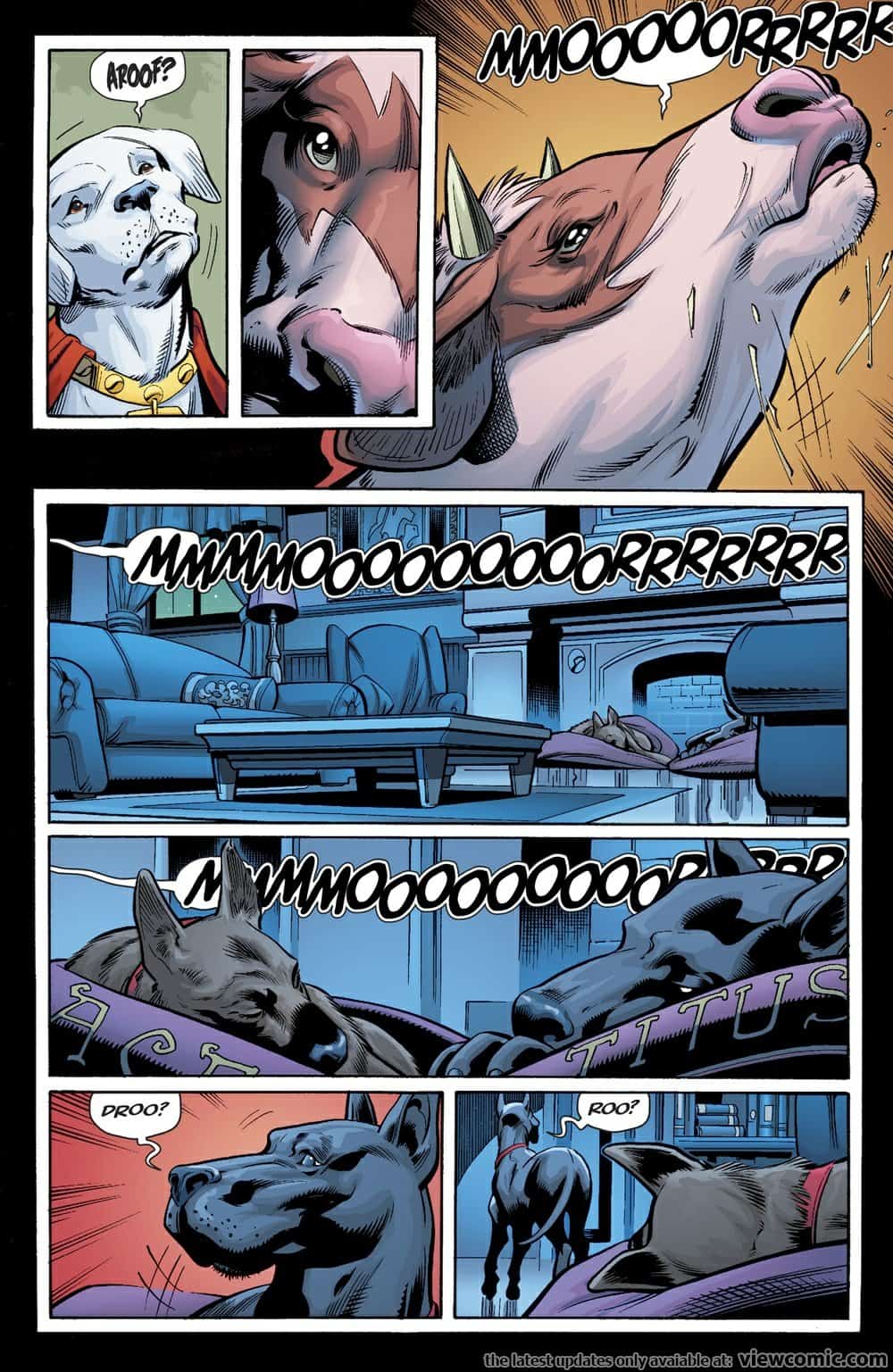 Krypto flies a very confused Titus to a building reading DC Investigations, where none other than Detective Chimp is reading a newspaper with a cast on his arm.

In the most dialogue filled section of this story Detective Chimp goes over the information then reminisces back to the days of the Super-Pets! The Super-Pets were a team of extraordinary animals; Flexi the Plastic Bird, Titus, Krypto, Bat-Cow, Streaky the Super-Cat and Clay Critter (origin personally unknown). 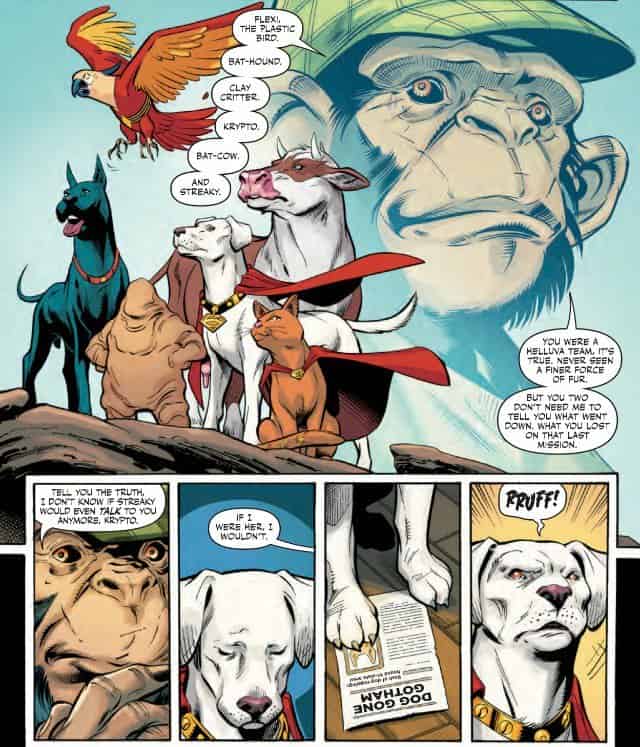 These special animals went on missions together but lately haven’t been around due to consequences of their latest mission together. Chimp lets Krypto know where to find Streaky and Flexi but lets them know that Streaky may not be too happy to see them, well at least not Krypto.

When Krypto finally does find Streaky we get some backstory to their last mission together. We find out Clay Critter met his demise due to Krypto being inactive at the moment of a Red Lantern attack on the Gotham Zoo. So when Streaky finally sees Krypto again she immediately goes into an offensive mode, and after a small tussle between the two Titus decides they no longer have time to fight if they plan to find the missing animals. Flexi shows up reuniting the rest of the Super-Pets, and when Krypto flies towards his objective we realize Streaky couldn’t live without Krypto in her heart. 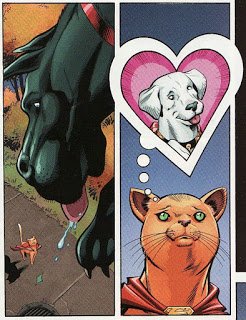 Finally, the Pets find the mysterious ship holding all of the captive animals before they break in we learn “The Stranger”, an Alien with unknown origins is responsible for the kidnappings due to hating animals being treated as lesser beings. Though some of those animals like being pets, so the Super-Pets break into The Strangers ship and comically lead the lost animals to safety and defeat The Stranger. 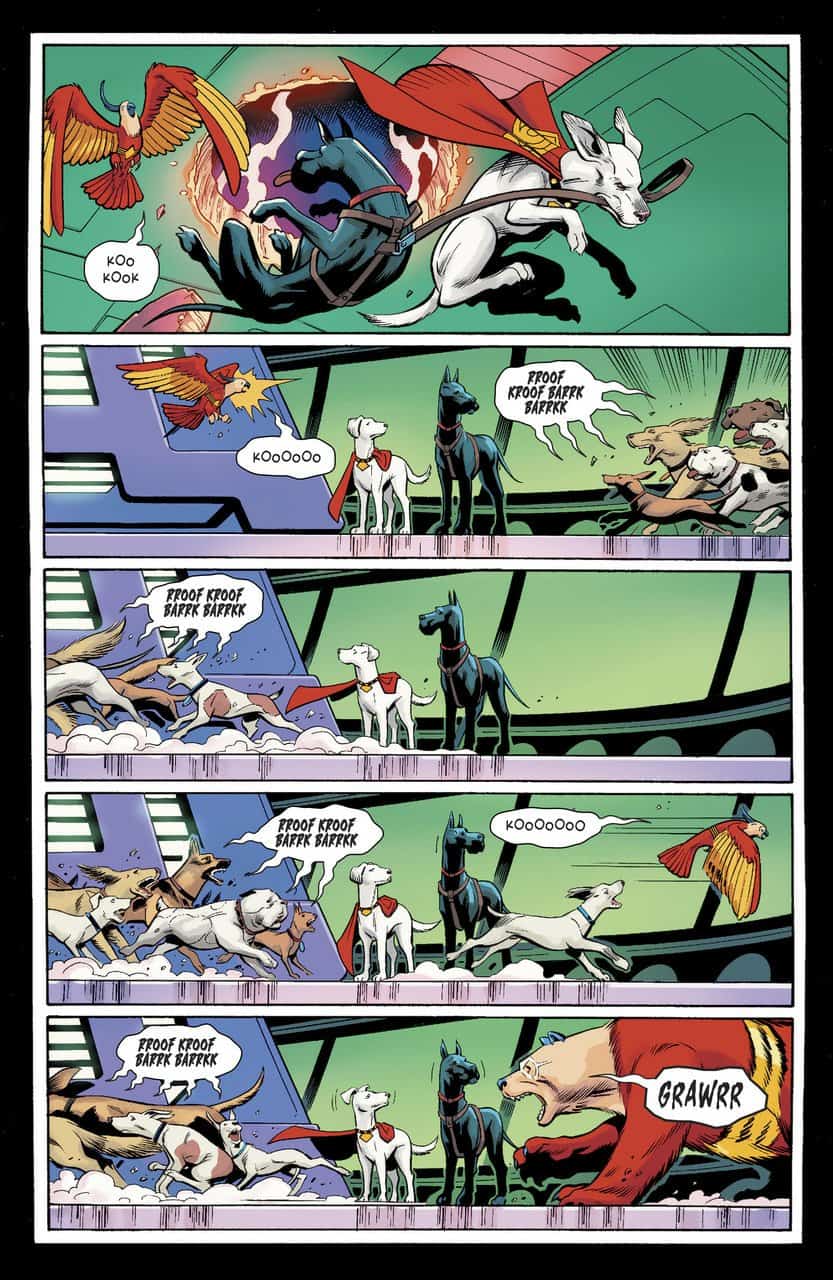 Our team of young hero soon wakes to find all the missing pets with a job well done, and now an even bigger job to be done. All thanks to The Super-Pets!

What Just Happened?
Peter J. Tomasi writes a unique story through the one-shot annual for Super Sons and what a fun time it was. The real heroes of this book are penciler, inker, and colorist Paul Pelletier, Cam Smith, and Hi-Fi for illustrating a story with almost no dialogue. I’ve read very few Super-Pets stories that were this enjoyable even with the very basic plot. Each character was shown with so much expression that one almost forgets the characters aren’t talking to each other.

The love story between Streaky and Krypto was cute and caught me by surprise due to the feud between the two early on. Flexi was my favorite part of the story, making me wonder if this story takes place after metal and if he will appear at the same time as Plastic Man when he finally returns to continuity.

Rating: 10/10
Final Thoughts: I really don’t have much to say about this annual except for I loved every second of it. The story that the artists told through this issue was easy to follow but complex enough to keep you wondering about a few of the characters. Tomasi makes Chimp the Oracle figure for the group making him a highlight of the issue, and for anyone who is a fan of super animals this Super-Pets story is definitely a must read for you!