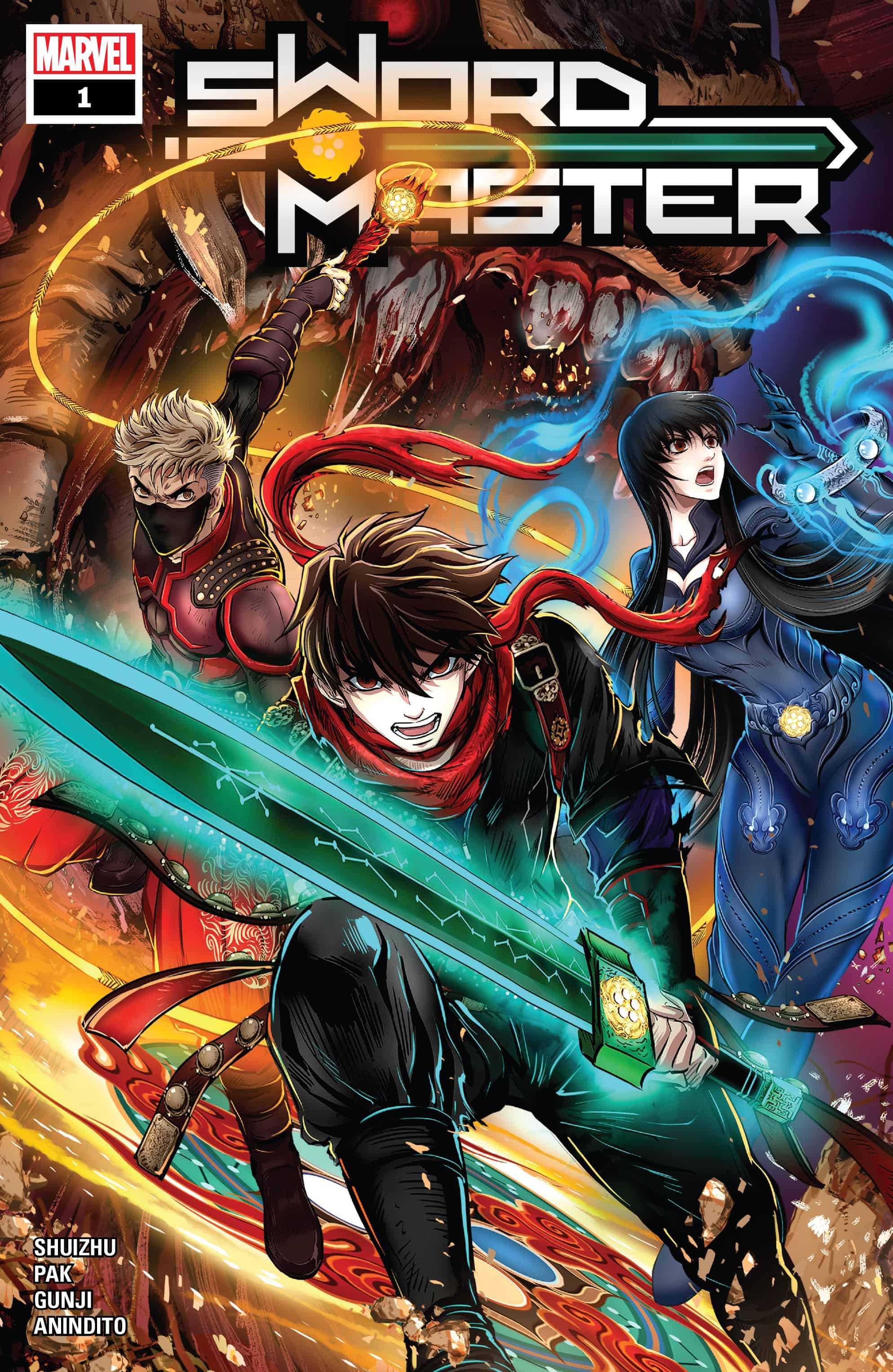 MIGHTY MARVEL MARTIAL ARTS DOUBLE TROUBLE! ALL NEW ONGOING SERIES! You saw him tear through Fire Goblins in WAR OF THE REALMS with his big, damn magic sword! Now learn the mysterious origins of LIN LIE, A.K.A. SWORD MASTER, Marvel’s newest Chinese superhero, in the English language debut of the original series written by Shuizhu and drawn by Gunji! Haunted by dreams of demons, Lin Lie hunts for his missing archeologist father – and for the secret of the black sword he left behind. And in a brand new story written by Greg Pak (NEW AGENTS OF ATLAS), Sword Master teams up with SHANG-CHI! What happens when an undisciplined, untrained kid with a magic sword tangles with the one and only, undisputed MASTER OF KUNG FU? (Spoiler alert: they will indeed drive each other crazy, with huge ramifications for the Marvel Universe!) 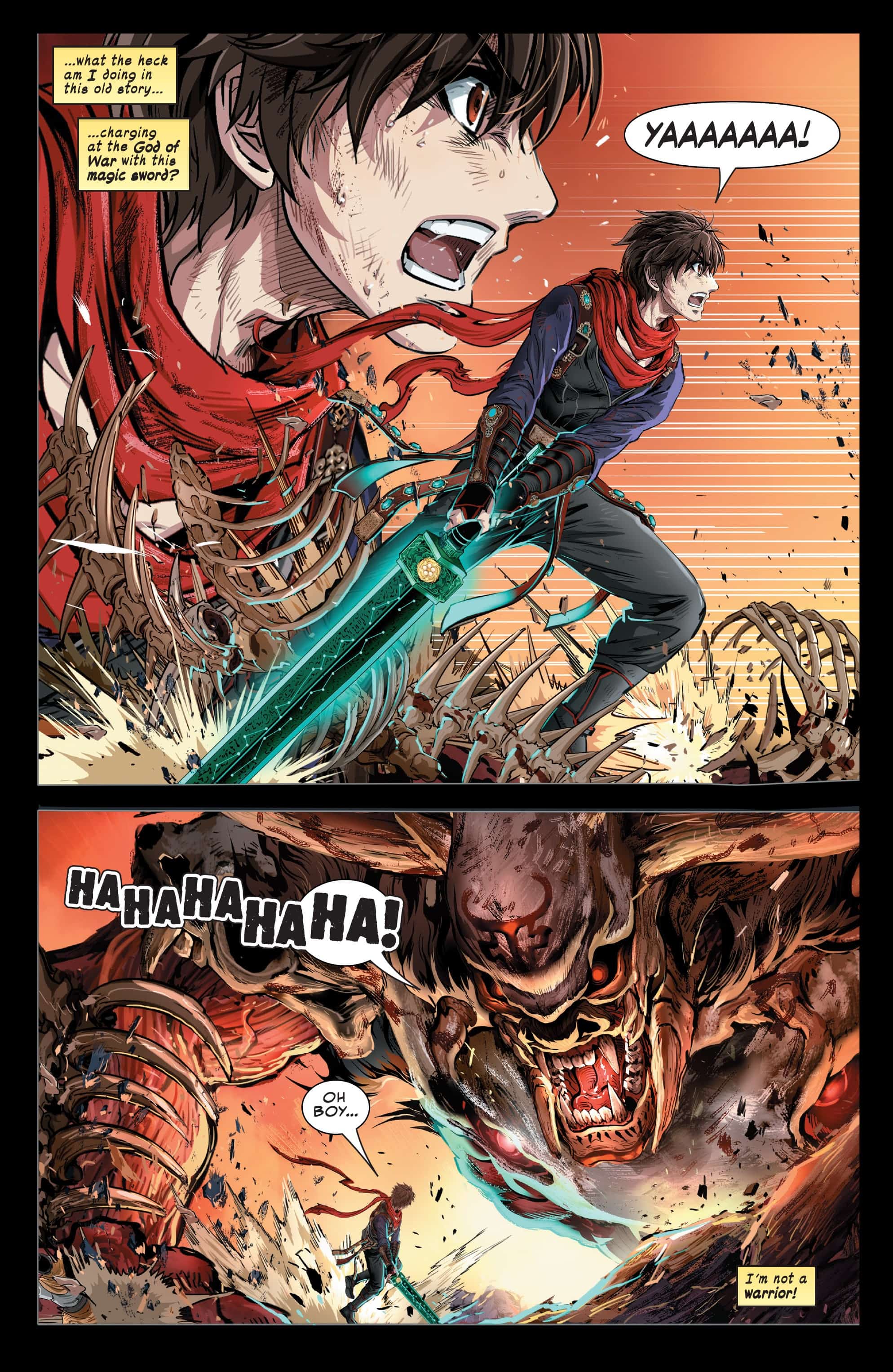 Our first story, “Sword in the Tomb”, is a beautifully adapted version of Shuizhu and Gunju’s new original series. Their unique tone and manga-inspired aesthetic help to create a book that is both engaging and visually stunning. The pacing begins to slow down as we near the end, but the narrative elements that are introduced take important steps towards building both an exciting and dynamic adventure. Though the action is limited, there is enough intensity to warrant this slower buildup.

My main complaint with the first story in Sword Master #1 is that it simply isn’t long enough, and honestly, is that really such a bad complaint? Leaving readers wanting more is usually indicative of quality storytelling on a fundamental level, and this story certainly checks those boxes. The mystery surrounding Lin Lie’s Father has all the right ingredients for a classic hero origin, including a mantle in the form of a magic sword. It feels poised to only get better from here.

The artwork from Gunji starts out incredibly strong, featuring multiple panels at the beginning that are unlike anything I’ve seen at Marvel in recent years. Lin Lie charging at the God of War wielding his sword is nothing short of magnificent. As the story settles into its mysterious roots, the wild visuals take a backseat to more complex character emotions, but everything is executed remarkably well. Hopefully the story will allow for more grand visuals in future issues.

Moving into the second story, “Sword Master & Shang-Chi: Master Class”, from Greg Pak, Ario Anindito and Rachelle Rosenburg, we are given something slightly more connected to the larger Marvel Universe. Shang-Chi’s involvement as essentially an instructor for Lin Lie is honestly just such a great idea. It works so well, their chemistry is immediately appealing and the lessons learned feel genuine. 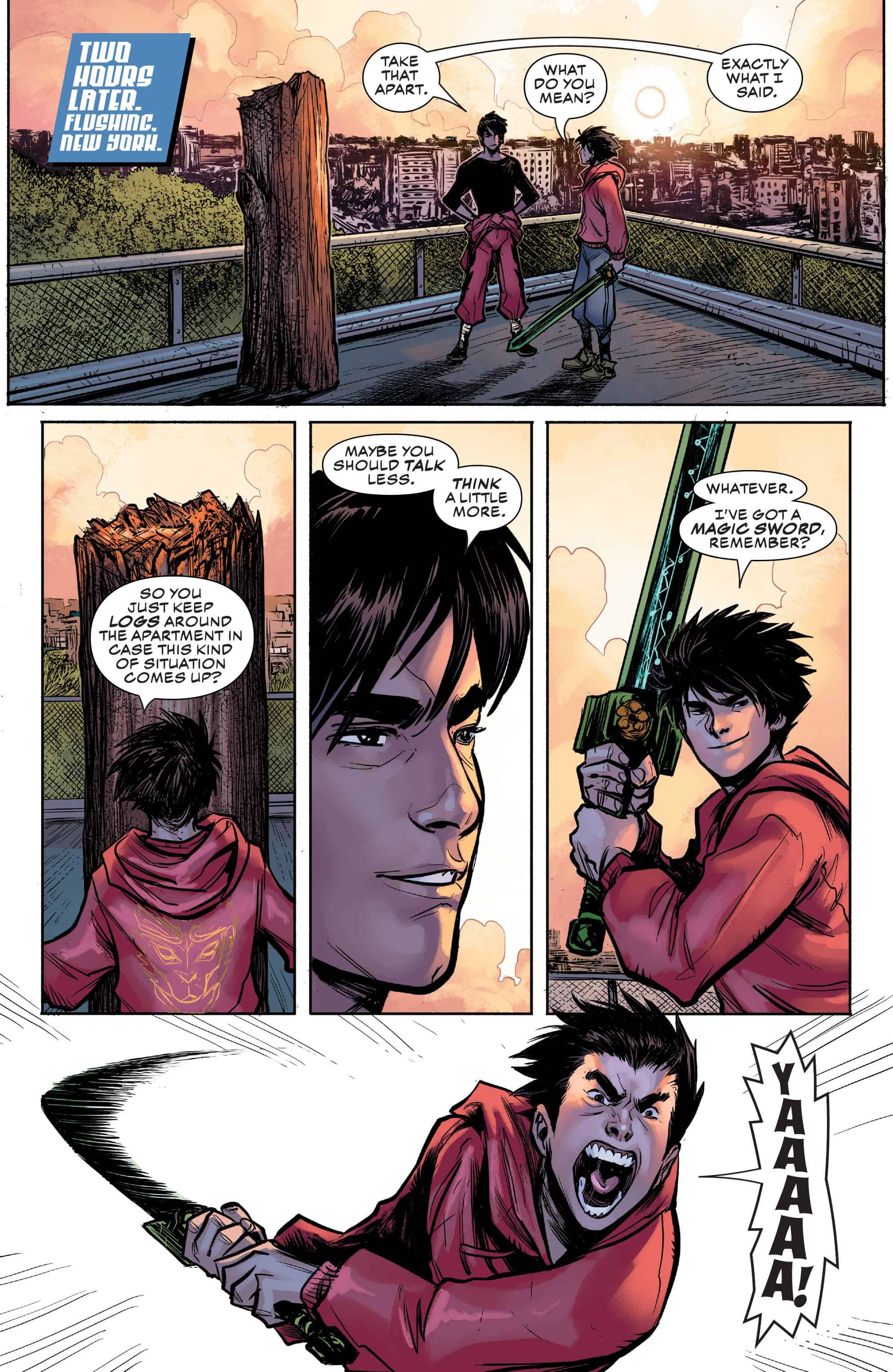 While the artwork in this story is good, the reliance on simple white backgrounds unfortunately begins to feel a bit haphazard at times. The character work is definitely solid, but I just wanted more visually. Luckily, it isn’t enough to detract from the overall enjoyment.

This is a less complex story,  as it gets right to the point of establishing each of the heroes and setting up the big bad. Which, when read alongside the previous story feels welcome, but could be less so on its own. Regardless, I’m still hyped to see more of this kickass team up!

Overall, the issue is a total blast to read. This is the type of originality and initiative I want to see out of Marvel Comics and I am excited to see where it goes from here.

'Sword Master #1' is an impressive and truly exciting achievement for Marvel Comics. It's a powerful double feature that succeeds on almost every level. Buy this comic!