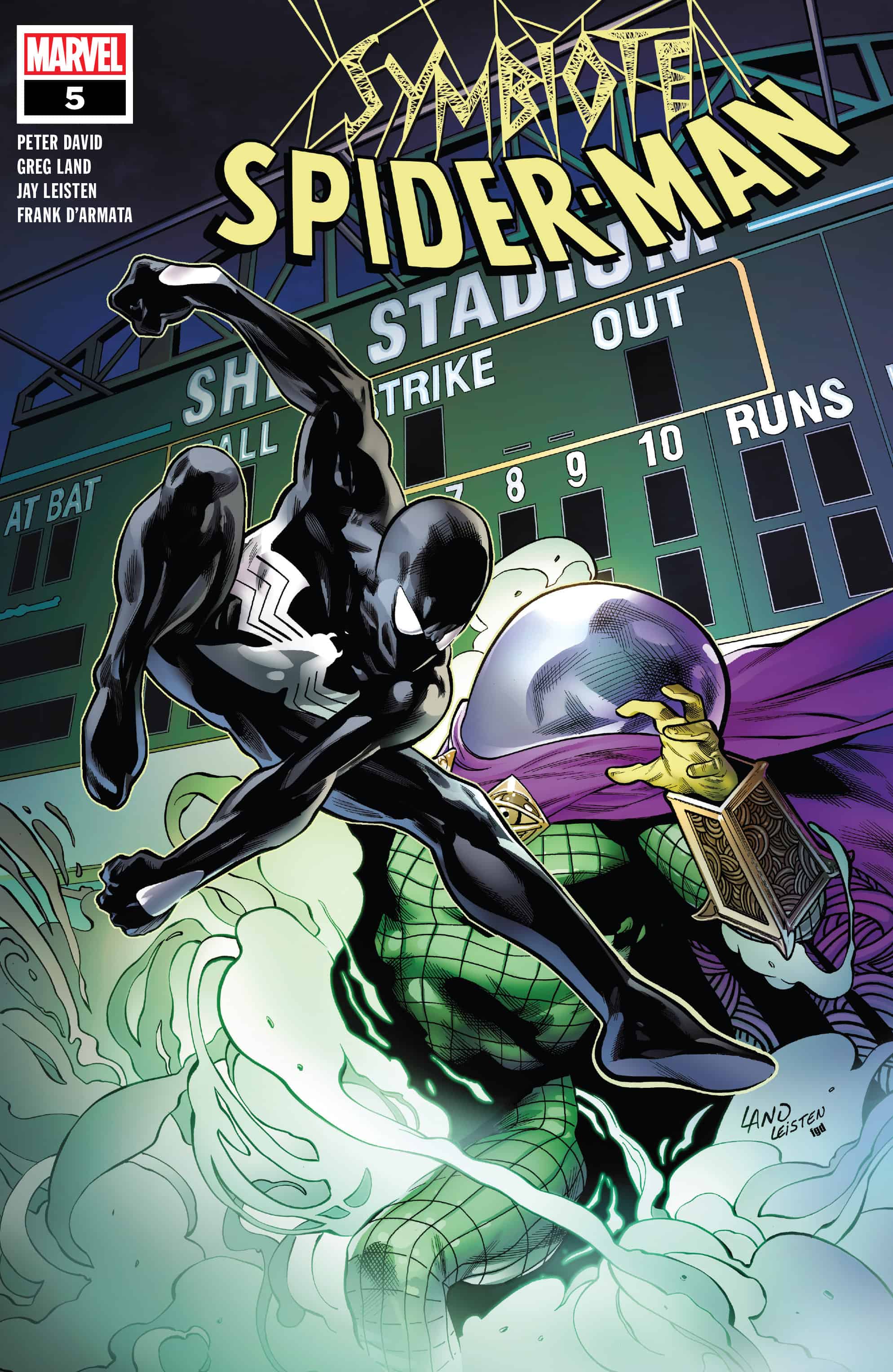 Oh no! Mysterio has powered up with a piece of the symbiote costume! 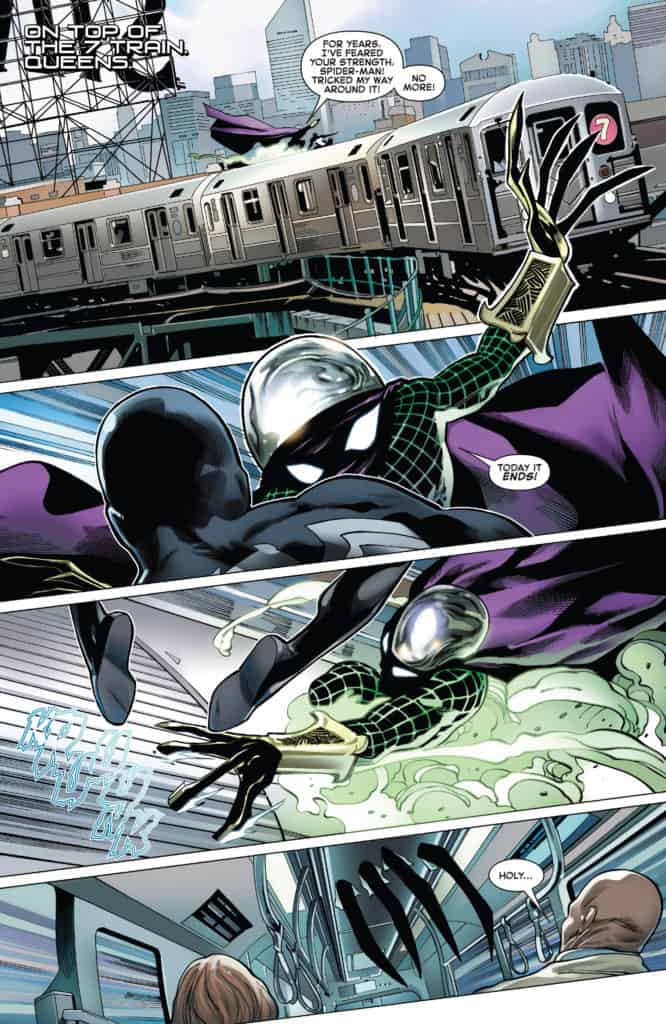 Locked in combat with Spider-Man atop an el-train, the villain seems to finally have what he needs to best his foe... 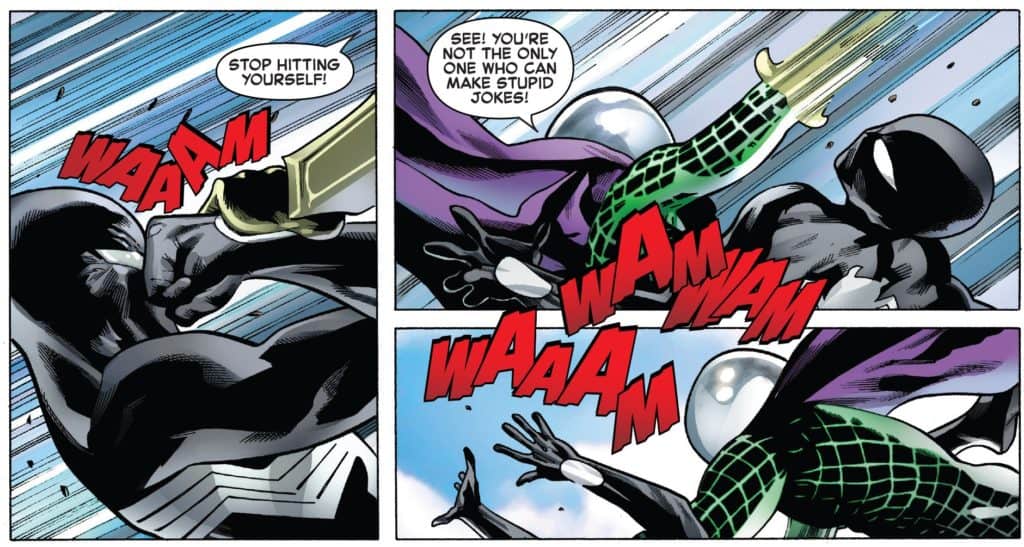 But there's more going on than meets the eye. For one, Peter Parker is actually asleep right now, and Mysterio is only winning because the symbiote has taken the wheel and isn't exactly a black belt fighter. For another, though, Spidey's about to have some unexpected back up! 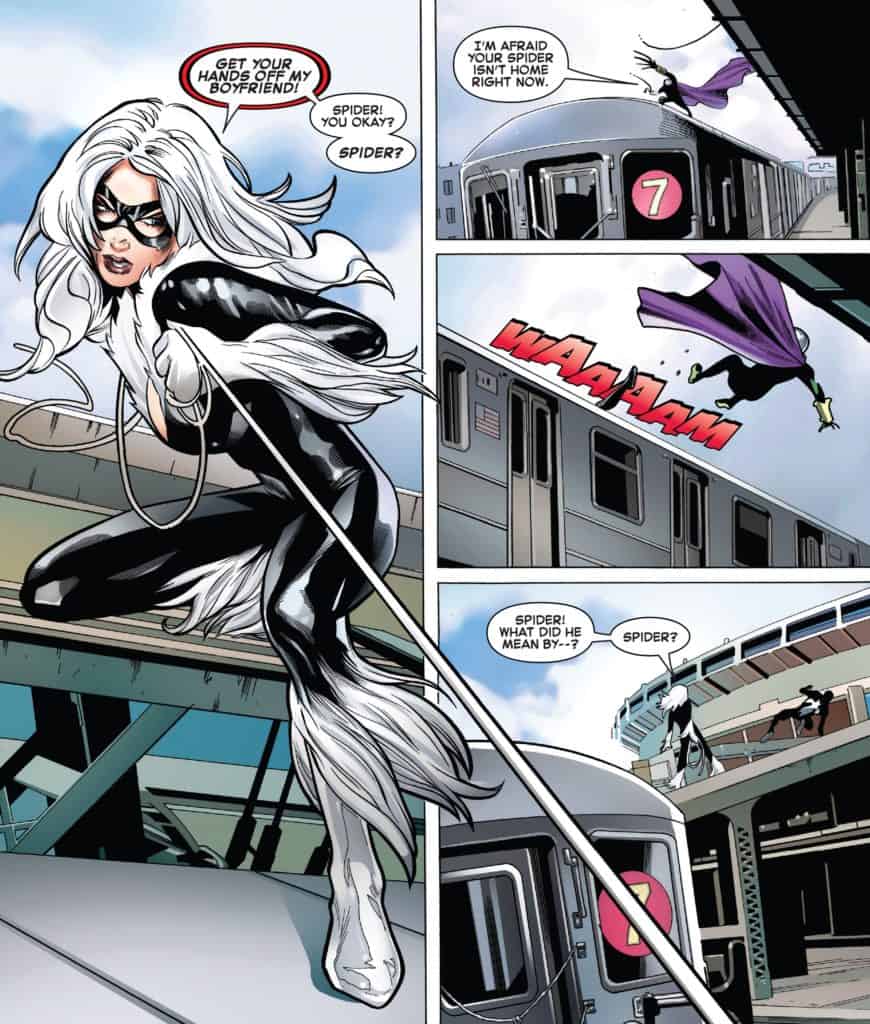 Even with Black Cat's help, can an unconscious Spider-Man prevail against a symbiote-powered Mysterio? More importantly, can he get to breakfast with Aunt May on time?! Or is she destined to continue being let down by her "irresponsible, uncaring" nephew? 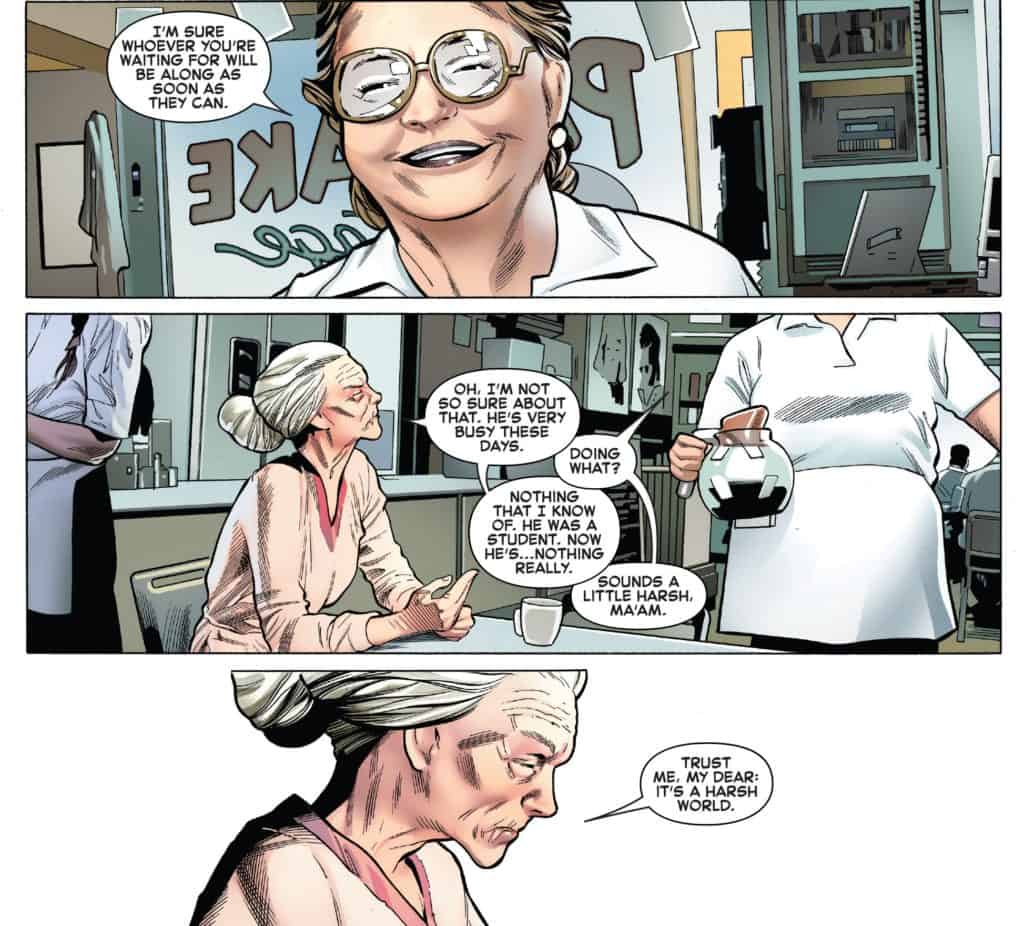 Symbiote Spider-Man comes to an action-packed, rip-roaring conclusion with its fifth and final issue! I wasn’t expecting much from what appeared to be a nostalgia trip strapped to a Mysterio-themed exercise in corporate synergy at the outset, but master scribe Peter David has proven more than capable of  making this adventure far more engaging than it has any right to be. Superficially, what more needs to be said about Spider-Man’s brief tenure as a host to a parasitic alien costume? Symbiotes have been well-worn territory in the last 30+ years (lookin’ at you, ’90s), to the point that anymore it seems a writer doesn’t have to have any sort of logical reason to stick Spidey back in his black suit other than that it looks cool (and now I’m lookin’ at you, “Hunted”).

But here’s the thing: comics are generally written with a fair bit more introspection and nuance than they were in the mid-’80s, when the original symbiote saga was written. More than just a nostalgia romp, this miniseries has delved deeper into the effects the alien costume had on Peter Parker’s life than any of those original comics ever did. It affects his relationship with the Black Cat, with Aunt May, even with his villains (Kingpin deftly noted last issue that Spidey appeared to be moving differently and wasn’t quipping, and of course Mysterio knows something of the costume’s truth). And, far from resolving the story, the sequel previewed at the tale end of this issue promises to delve even deeper into this Spidey era’s rich history with modern eyes and sensibilities. The entire creative team deserves a pat on the back – even Greg Land, who, despite some awkward panels where it becomes clear he doesn’t know how to draw either the elderly (Aunt May) or obese people (Kingpin), he really cleans up and makes this book shine. That doesn’t forgive his admitted tendency to outright trace photos – or his shameless cheesecake shots of Black Cat – but there’s no denying this is a slick-looking comic.

Poor Mysterio. Alas, his ambitions outweighed his abilities, even with a symbiotic power boost. David should also be given credit for bringing inner life to this stalwart Spidey foe, who for one of the few times in his decades-long existence on the page projects a strong sense of inner life and even as a full-blown character arc throughout the course of this series. Then, like Icarus flying too close to the sun, it all comes crashing down – a reconnect with where Spidey, Felicia, Aunt May, Kingpin, and even Mysterio were at this point in the original symbiote saga, neatly and tidily tucking this unexpectedly delightful miniseries firmly into an expanded continuity. Job well done.

Symbiote Spider-Man wraps up firing on all cylinders, with slam-bang action and a creeping sense of dread at the end, knowing what's still to come for Spider-Man and his "wondrous" new suit.