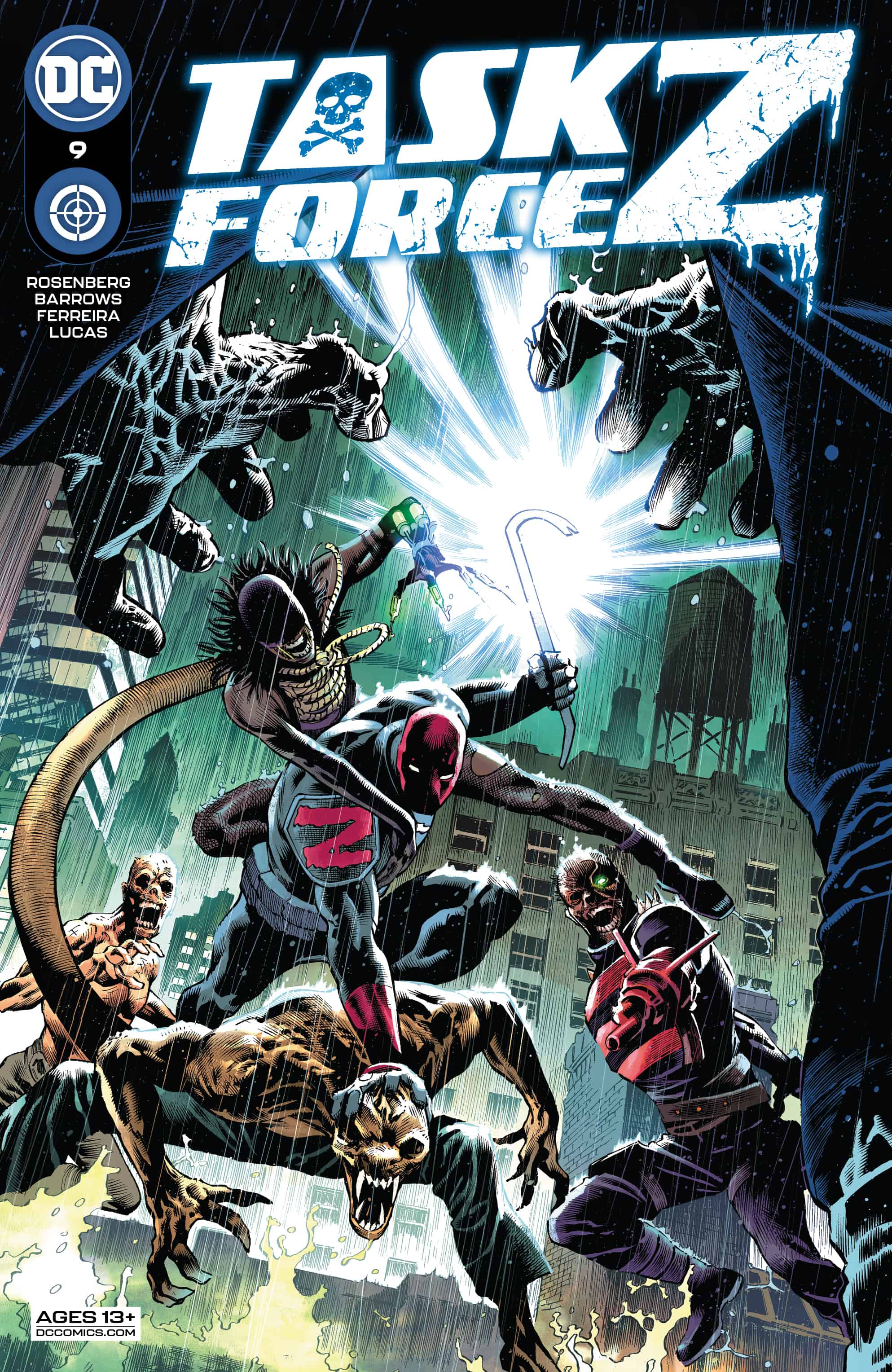 Betrayed by Mr. Bloom, can Jason Todd and Harvey Dent rally their zombie forces to prevent the stalk-like villain from giving Powers International the secret to resurrection? And will old grudges and unknown secrets tear the team apart before they're able to finish their mission?

There’s something to be said about the “fun factor” of certain comic books. 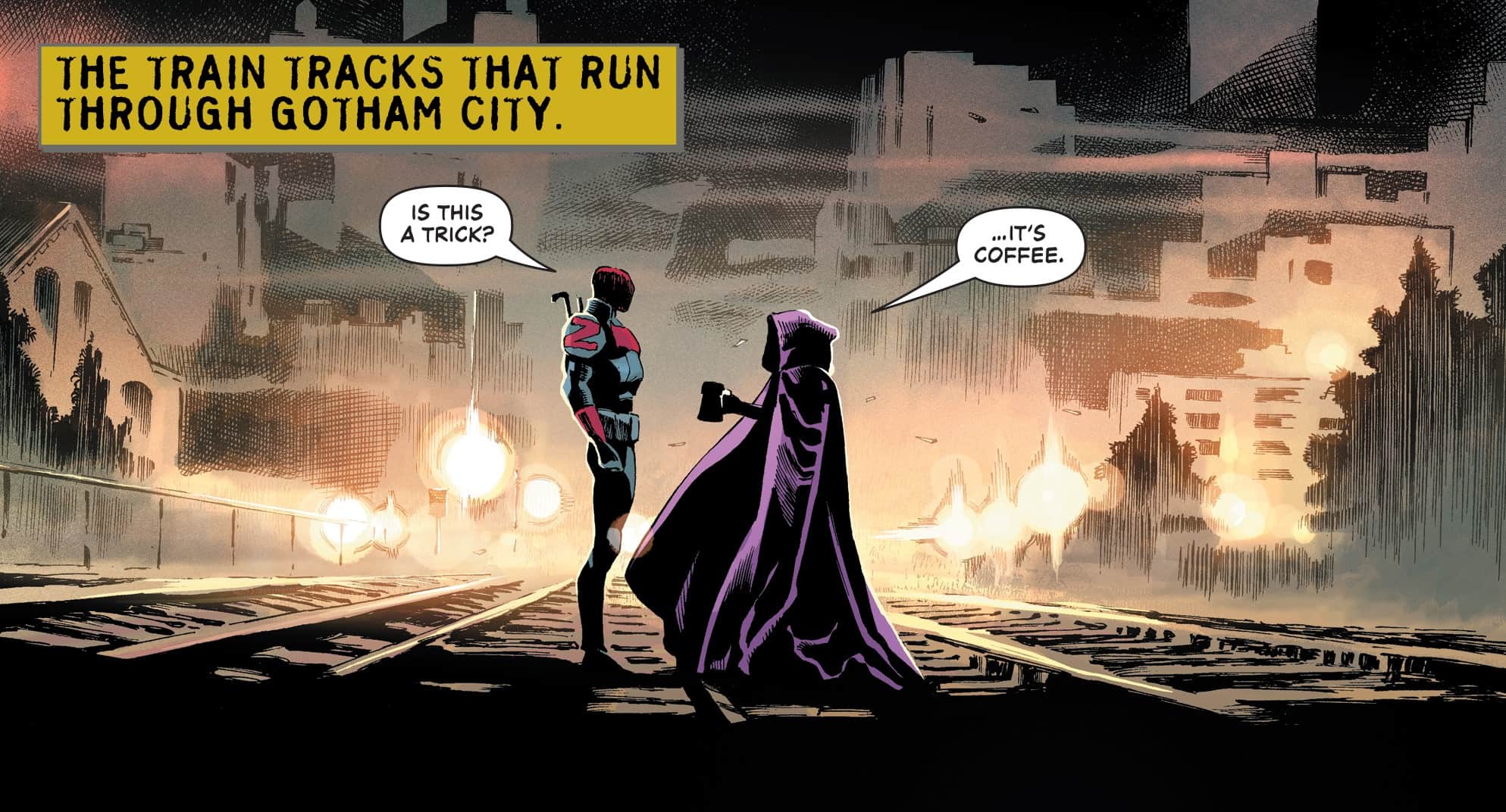 Some are fun because they’re light hearted, have smiling characters and are pretty adventurous – they’re usually cheerful journeys. Task Force Z flips that idea on its head by being fun and absolutely terrifying, disturbing and horrific at the same time thanks to Matthew Rosenberg’s irreverent writing. With the team consisting mostly of the reanimated corpses of Gotham’s worst such as Bane, Solomon Grundy, KGBeast and Victor Zsasz among others, Rosenberg finds a way to make each of them charming in a braindead manner as their callous violence is amplified by their zombie-like nature and has to be tempered by a tired-of-it-all Jason Todd and slightly reformed Harvey Dent. At the same time, they stand against the monstrous Mr. Bloom and his twisted experiments, trying to bring the dead fully back to life…or horrifically mangled such as when he kept Kirk Langstrom’s head untransformed, unlike his Man-Bat body in the previous issue.

Throughout the entirety of this book, things are kept darkly comedic. With Bloom masking his underlying terror with passive, normal workplace humor as if he weren’t a stalk like flower monster. And Jason Todd regularly quips through the absolute horror that he finds himself a part of, pointing out the numerous traps and mishaps he and his team find themselves in – as well as, more often than not, failing to rein his team in when their murderous tendencies take over. While I usually prefer a serious Jason, Rosenberg manages to make the non-serious styling of this book work while still sprinkling a little bit of pathos into the story, such as when Jason initially refuses to work with Black Mask to keep his team safe for a little while. 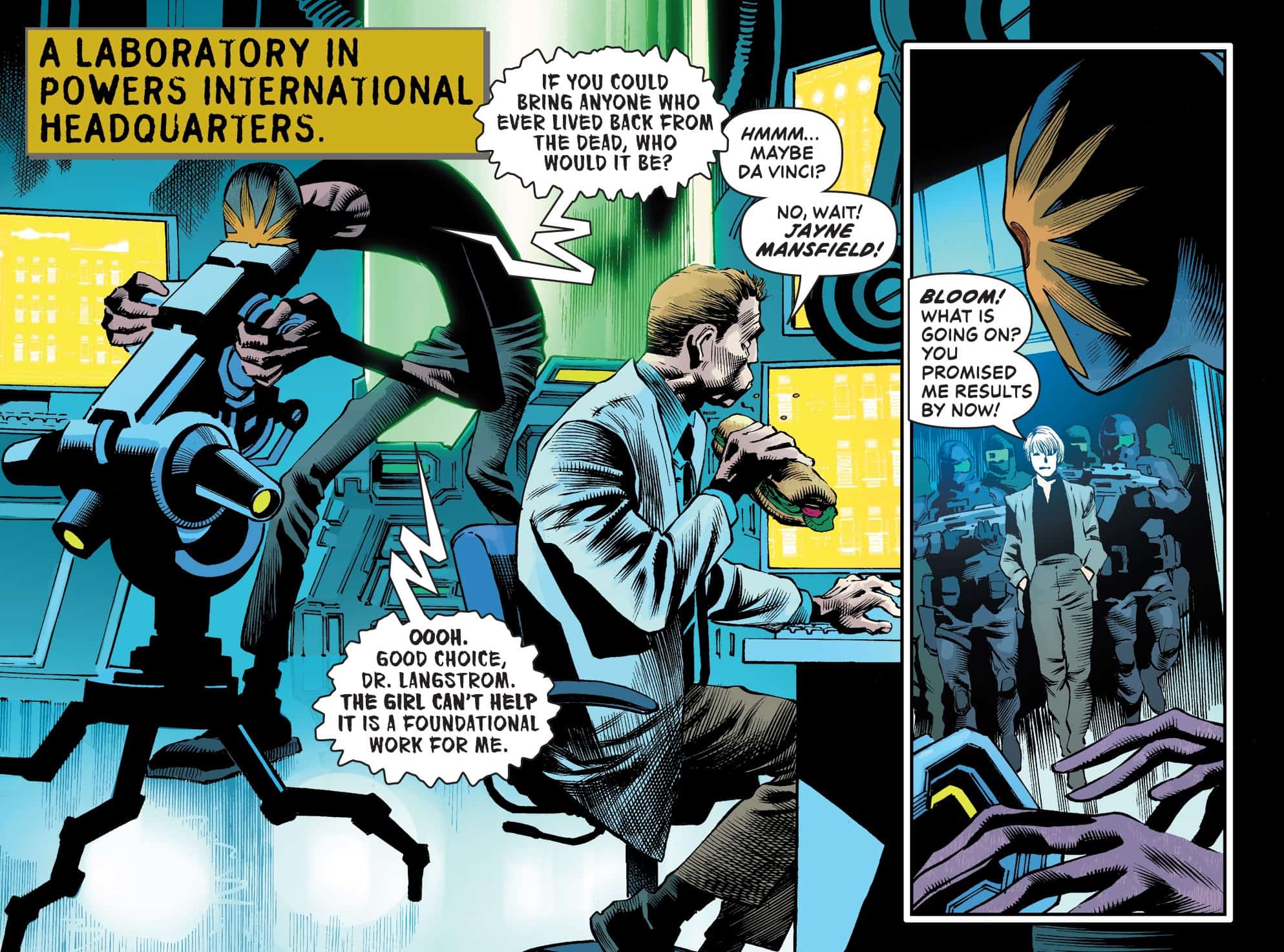 Of course, good writing can only take a book so far; it takes a skilled and talented artist to raise a book from okay to absolutely fantastic and Eddy Barrows is that artist. Barrows is the absolute perfect choice when it comes to pulling off the horror aesthetic of this book as everything aside from the living characters is just a little bit off in order to make readers uncomfortable. The zombies are given a lurch when they move to convey their mostly limited agility; they appear heavily desiccated, allowing their veins to be seen clearly, acknowledging that the only thing keeping them alive is the Lazarus Resin flowing through their vascular systems; and some of them even appear to be slightly decayed, like KGBeast not even having lips anymore.

It’s not only appearances that Barrows is great at, it’s panel to panel action as well. Calm scenes are given standard square/rectangle shapes and flat shots to show that things are relatively still, but when the action kicks in, there are a variety of high views and panels at slanted/dutch angles. Characters seem swift with blurred movements and attacks look brutal because of the characters involved. There’s an amazing page when a character from previous issues, Sundowner, returns with a splash page as the background and foreground is just her wrecking Task Force Z. That alone is worth the price of this book. 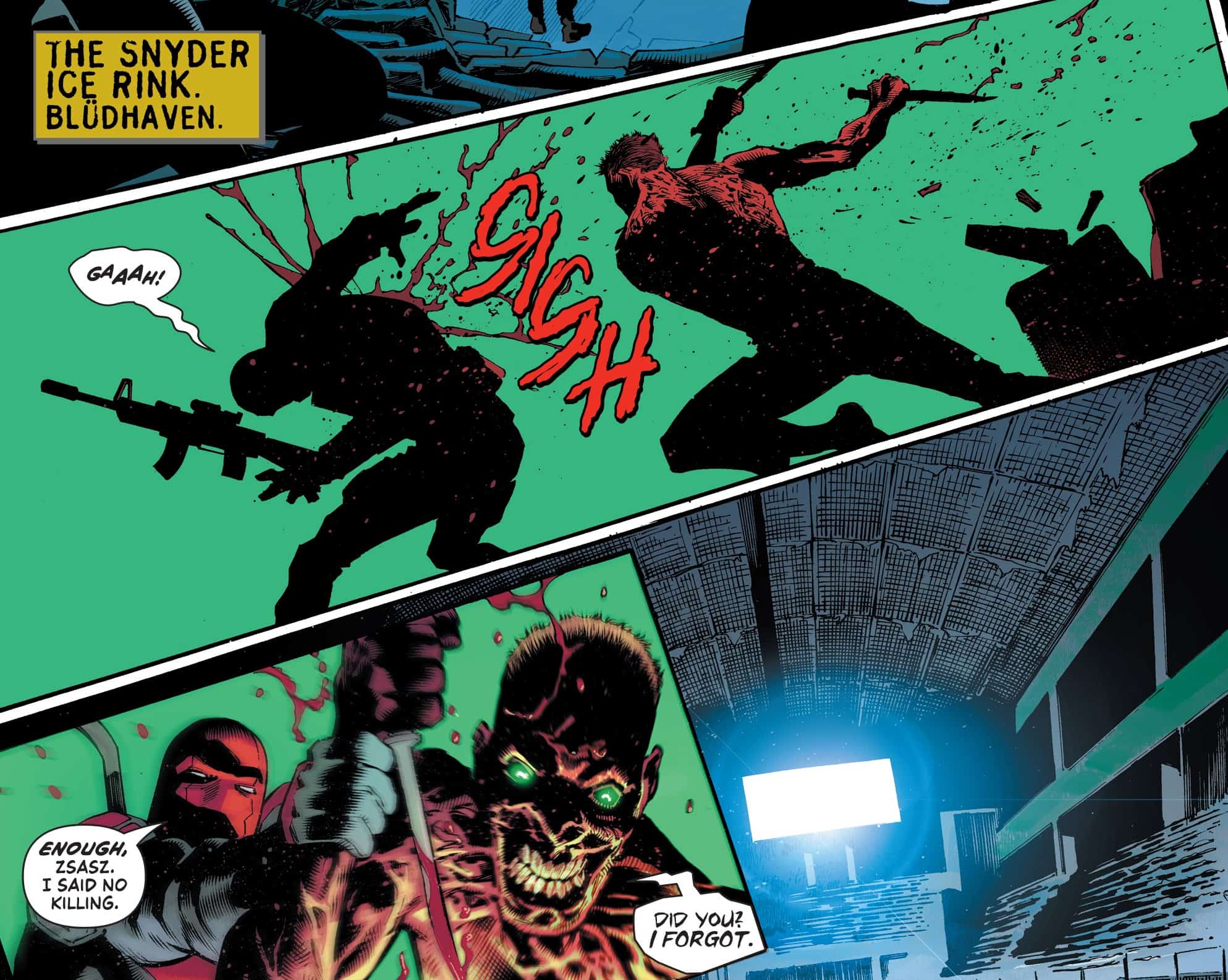 And where would Barrows be without the rest of his team in inker Eber Ferreira and colorist Adriano Lucas? Ferreira absolutely sells the tone of the book with his heavy inks, making the entire thing feel like a horror movie with how thick and oppressive shadows are, how well defined character outlines are and the sheer depth of the artwork. It’s wildly unsettling and helps to sell readers on how dangerous this team is through the lighting while also making sure that they absolutely pop off the page.

Adriano Lucas helps to further elevate the art and inks by contrasting the darkness with very vivid and vibrant colors throughout. With everything related to the Lazarus Resin, there’s an unnaturally bright green glow as seen through many characters’ eyes to emphasize what’s keeping them alive. Many characters make use of harsh reds, like Red Hood’s with his helmet and the eyes of Bane’s mask, but the best example has to be the demon that Sundowner becomes. These help them look distinct in shadows and in Sundowner’s case, help Lucas express the sheer danger that she poses as her pages are flooded with the color. 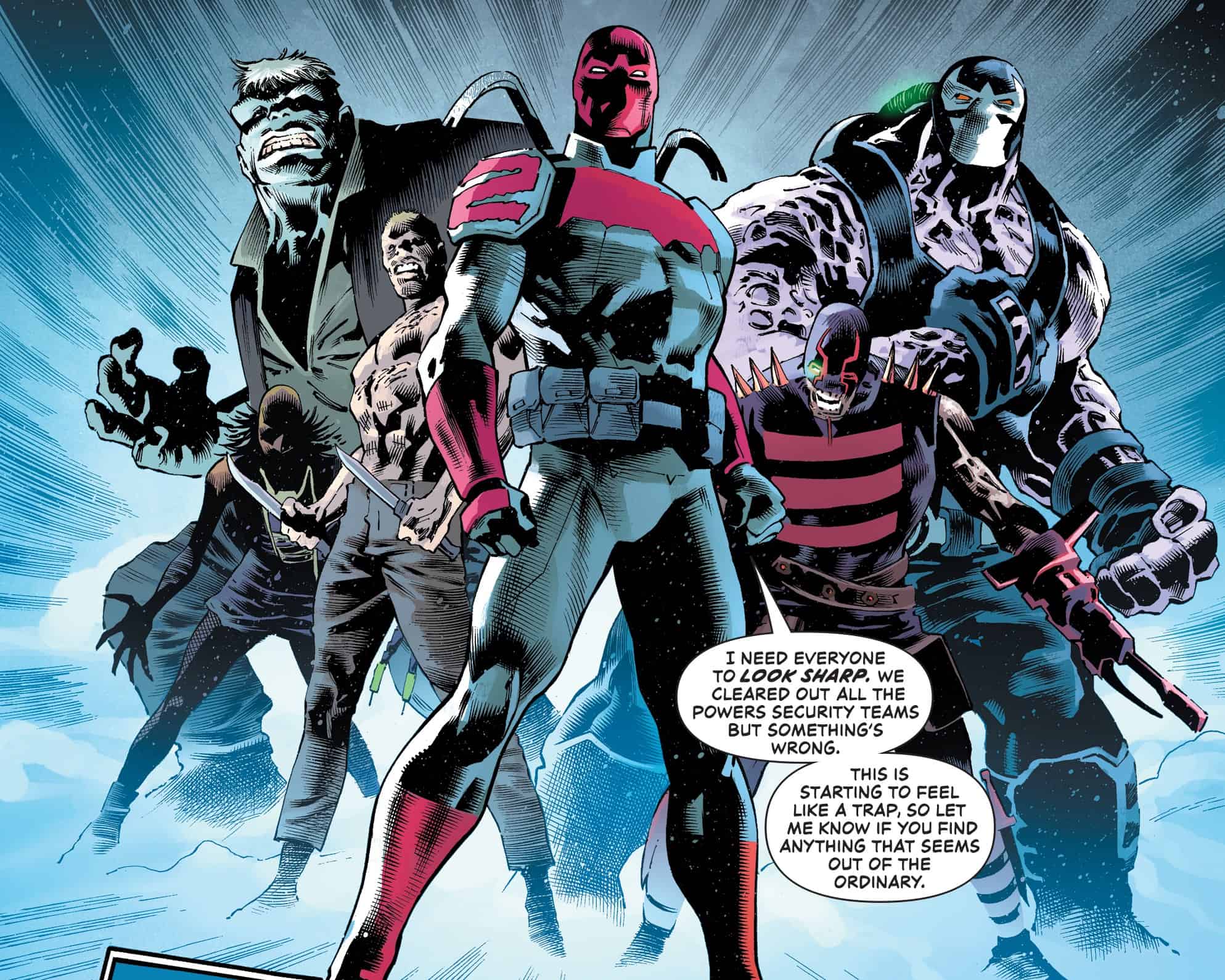 In contrast, there are several scenes with Mr. Bloom and Kirk Langstrom that are given a nice and cool blue tone to them. These indicate the cold and calculated nature with which Bloom has been manipulating everyone around him for his own nefarious means. The color also gives things a sense of calm unease unlike the tense and frantic nature of the zombie squad pages.

Task Force Z is terrifyingly good. Matthew Rosenberg, Eddy Barrows, Eber Ferreira and Adriano Lucas are absolutely killing it with this book thus far. The storytelling is fun and engaging, the art is phenomenal at all levels - this is unexpectedly one of the best series DC is currently publishing!