Teen Titans #27: The Calm Before the Storm 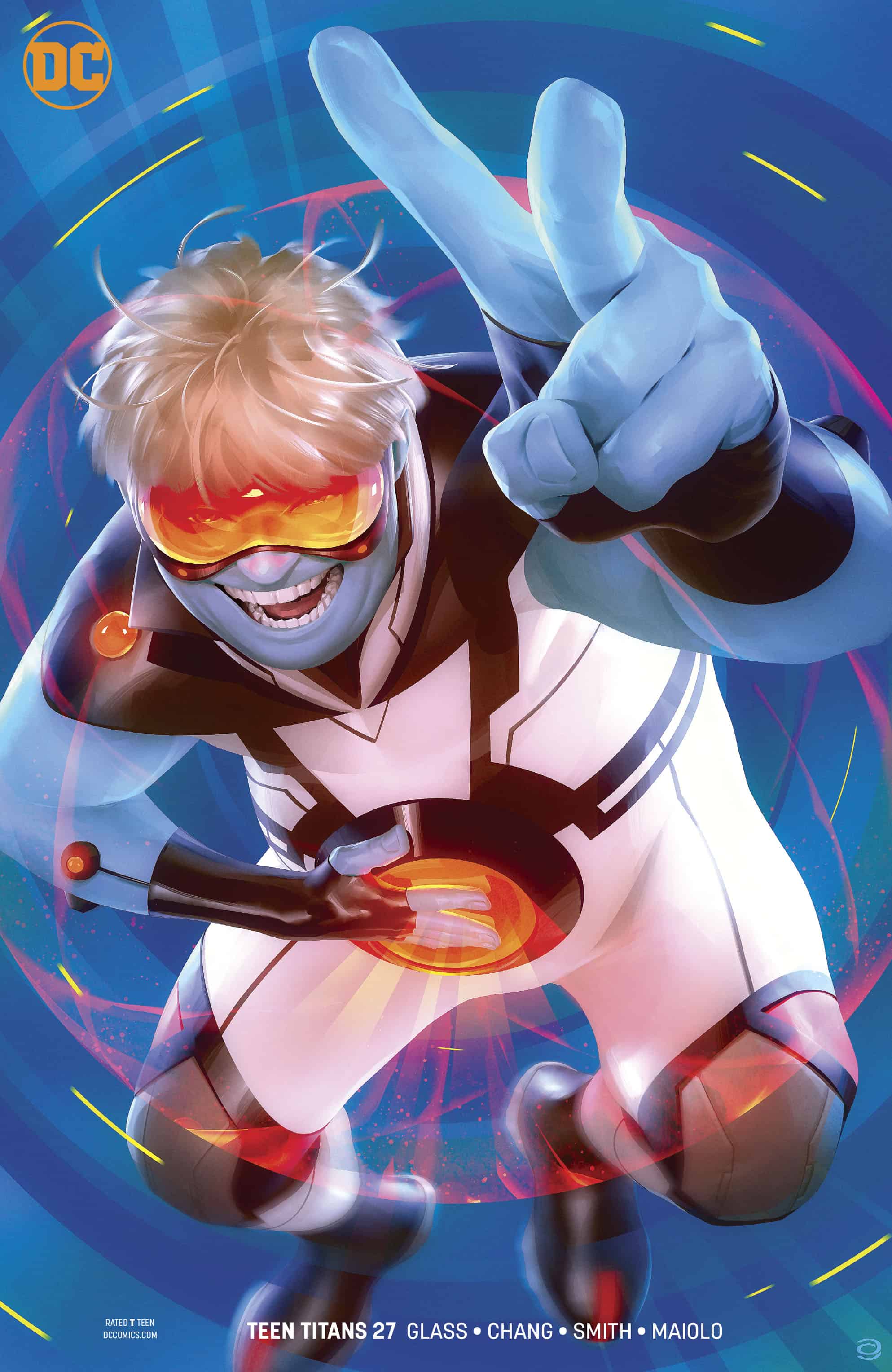 After Robin's recent beat-down courtesy of the Red Hood, the Teen Titans take some much-needed down time. Robin, nursing his wounds, bonds with Djinn, and possibly sparks a quietly-simmering romance... 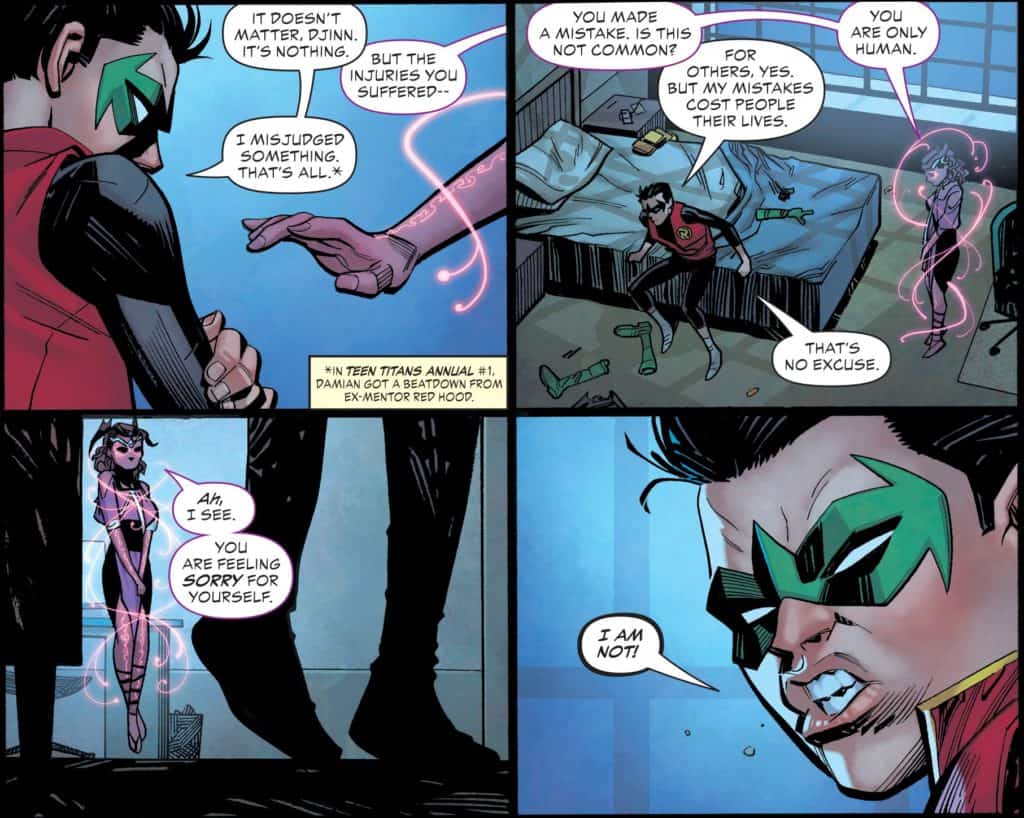 Their bonding time also leads to the long-gestating origin story of Djinn, and the dark secret she's harboring.

Meanwhile, Kid Flash and Roundhouse have a hilariously awkward dinner with the latter's overbearing mother... 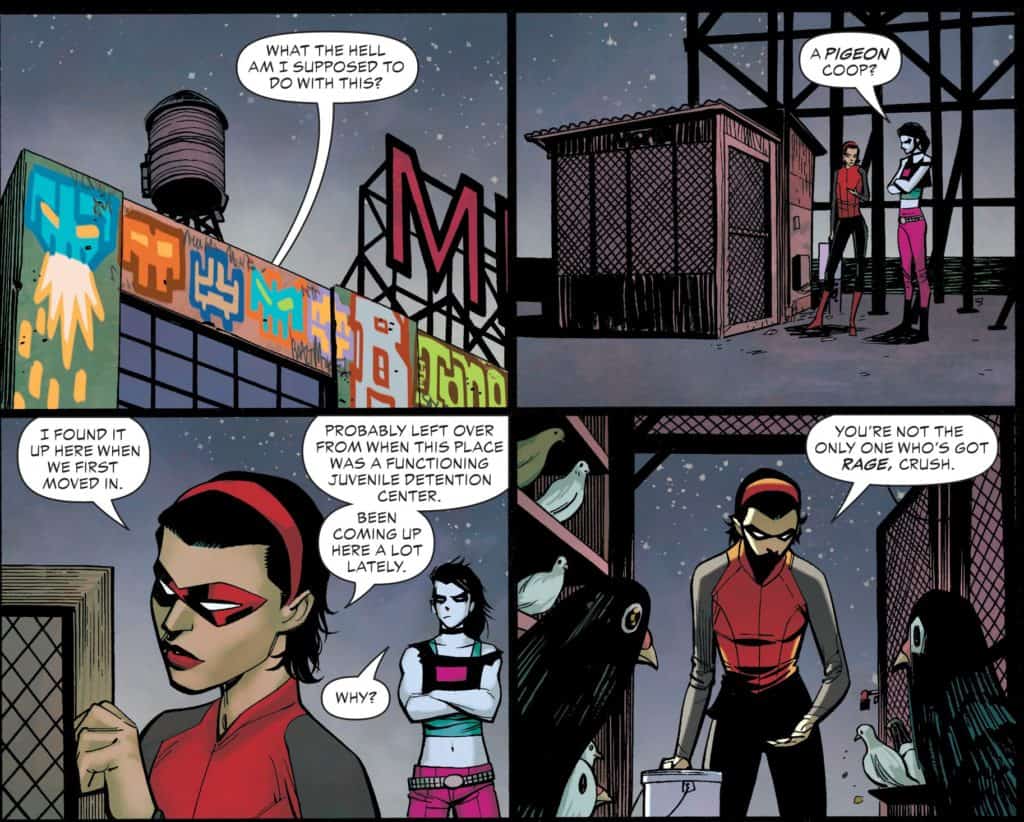 All of their quiet reverie is interrupted, though, by the revelation that Deathstroke has escaped Arkham Asylum!

Teen Titans continues to prove that it’s quietly one of DC’s most compelling books by spotlighting its strongest component this issue: its character work. Writer Adam Glass has an uncanny knack for writing kids who project a certain outward image to the world, but are hurting inside. Y’know, teenagers. 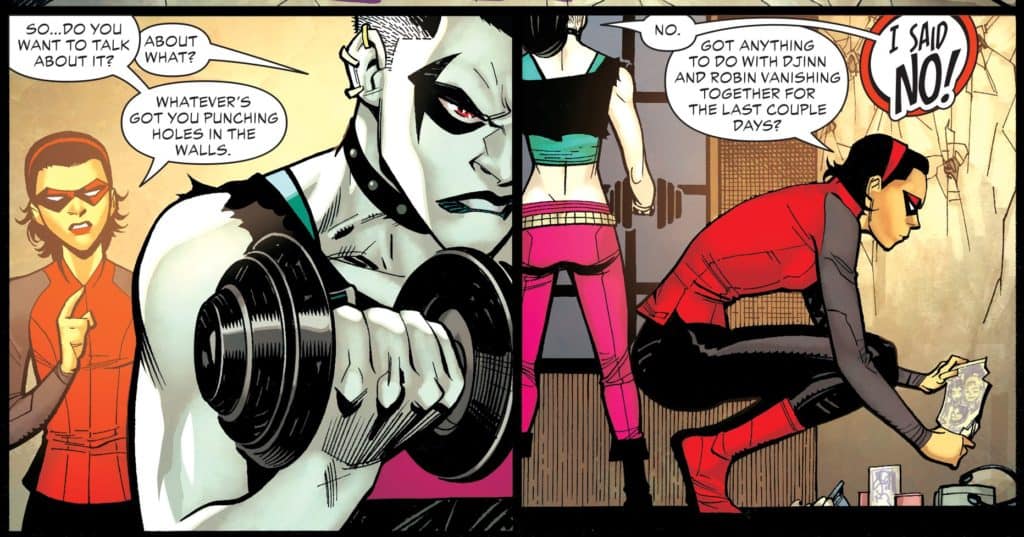 The way Glass pairs the characters off is a masterstroke in interpersonal dynamics: the wounded and defensive Robin with the emotionally sensitive yet also-secretive Djinn; Red Arrow’s burgeoning mother figure with Crush’s pissed-off daughter searching for someone to look up to; Kid Flash’s genuine earnestness with Roundhouse’s secret loneliness (the why of which is also revealed this issue, a quietly devastating revelation that goes so very far in telling readers so much about this kid’s motivations). 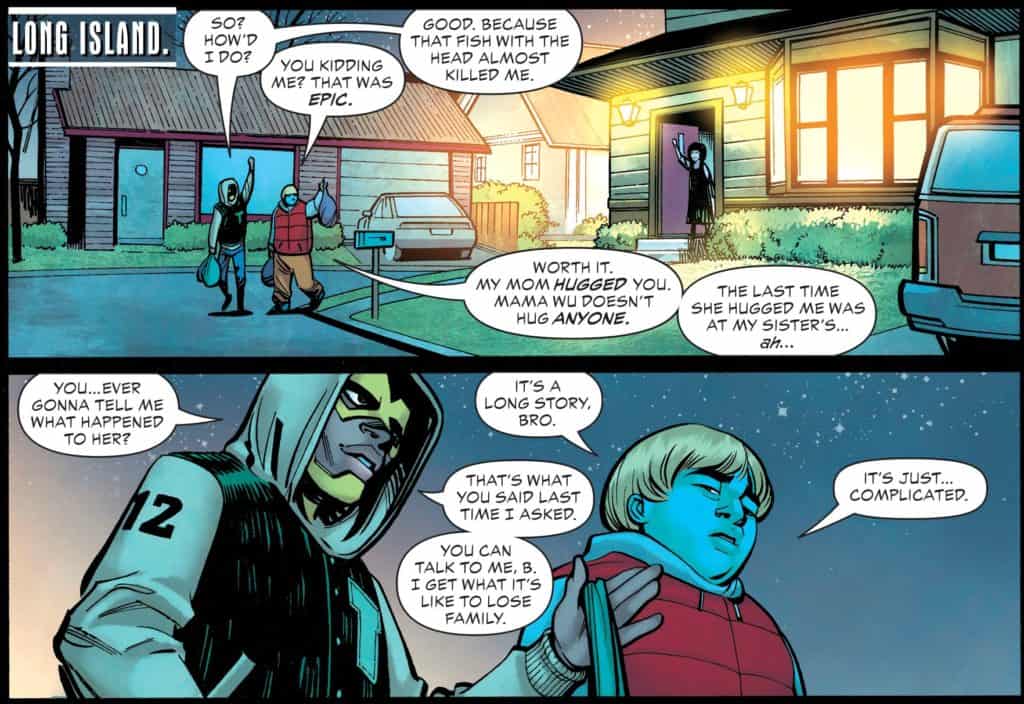 Although technically the least happens during the above’s dinner with Roundhouse’s mom, I’d argue that Glass earns the most mileage out of it. Mama Wu’s microaggressions are painfully awkward, and her oversharing of her opinions made me legitimately laugh out loud. (Her suggestion that KF and her son aren’t “real” heroes, but China’s New Super-Man Kenan Kong is, would be terrible if she weren’t so well-meaning in her obliviousness: Someday you’ll be real heroes, boys!) But all of that is really just serves to show readers how isolated and lonely Roundhouse is, especially given the reveal of what caused his sister’s death, and how it hangs over him every day. Suddenly, the team’s joker becomes its most relateable member.

Robin and Djinn’s interactions play a bit more predictably, and while the latter’s backstory goes a long way to explain her extreme guilt, its foreshadowing of things to come is pretty obvious. I’m not sure how much I buy Robin and Djinn as a romantic pairing, but the fact that it’s fueling Crush’s jealousy (she’s into Djinn) and anger is comic book soapiness at its best. I really can’t wait for the inevitable Robin vs. Crush throwdown. 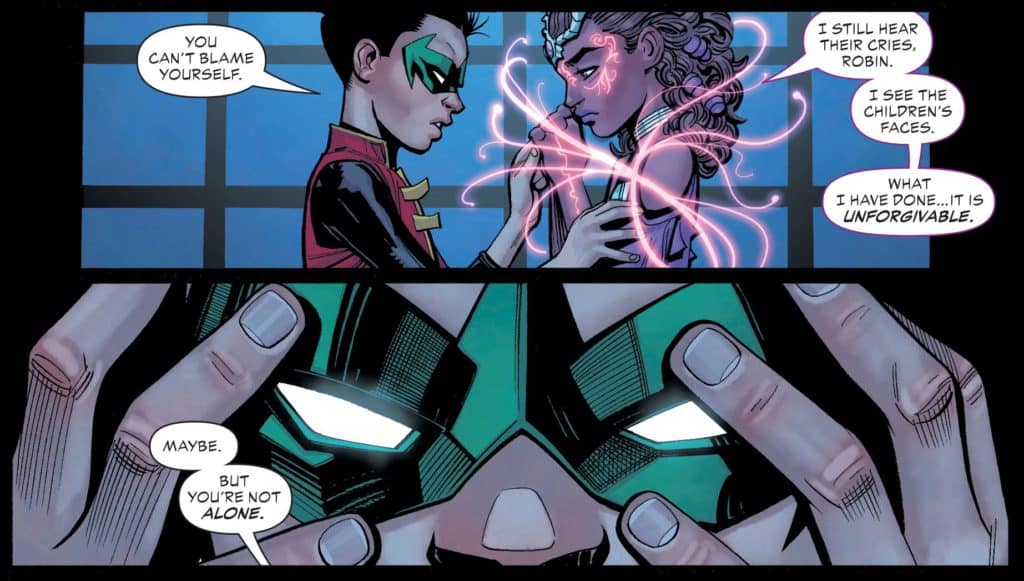 I’d argue that Red Arrow and Crush’s scenes work the least-well, predominately because of the speed with which Crush buys into Emiko’s outlet for her pain but also because Red Arrow isn’t given much to do other than play the role of den mother (a role she’s struggled to get out of lately). Crush is nursing a lot of anger, both toward her (supposed) biological father Lobo but also because her romantic feelings toward Djinn aren’t reciprocated. That’s an extremely difficult thing for anyone to deal with, but we’ve all been there at one point or another, making her anguish a universal truth. 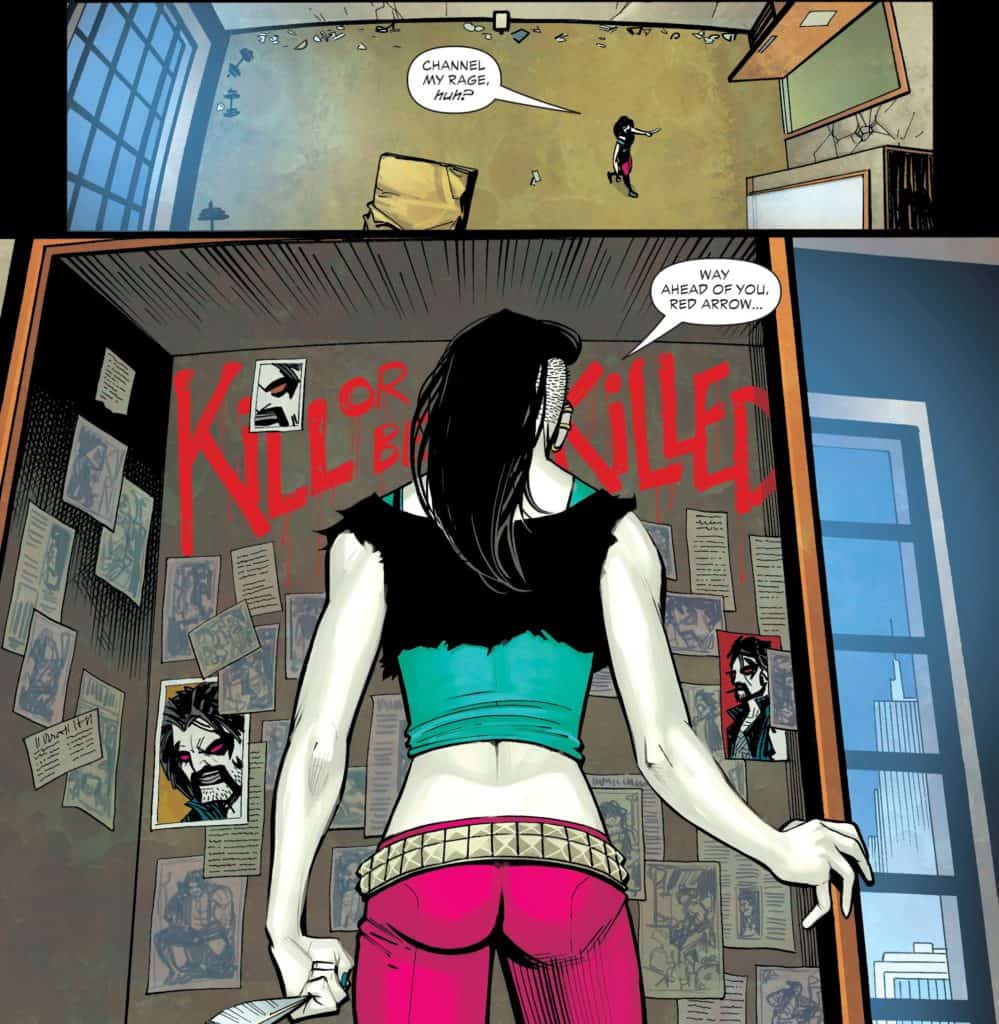 Glass’s story wouldn’t work half as well, though, if he weren’t aided so capably by artist Bernard Chang, who gives the story a wonderful sense of pacing throughout. He frequently uses grids of six or eight panels to give the story an organic flow, which also lends equal weight to each panel. This by default then means that the reader must give equal importance to the goings-on in each panel, which elevates their engagement and investment levels. A reader would have to be made of stone to not feel for each of these kids by the end of the issue.

Teen Titans is quietly one of DC's best books, and easily the best Titans book since Geoff Johns' run ended allllll the way back in 2007. By focusing on the team's interpersonal dynamics, Adam Glass is staying true to the team's credo that they're a family first, and superheroes second. The way these characters bounce off one another so organically is reminiscent of early seasons of Buffy, which is some of the highest praise I can give!

Teen Titans #27: The Calm Before the Storm