Teen Titans Academy #2: You Can’t Have Any Pudding If You Don’t Eat Your Meat! 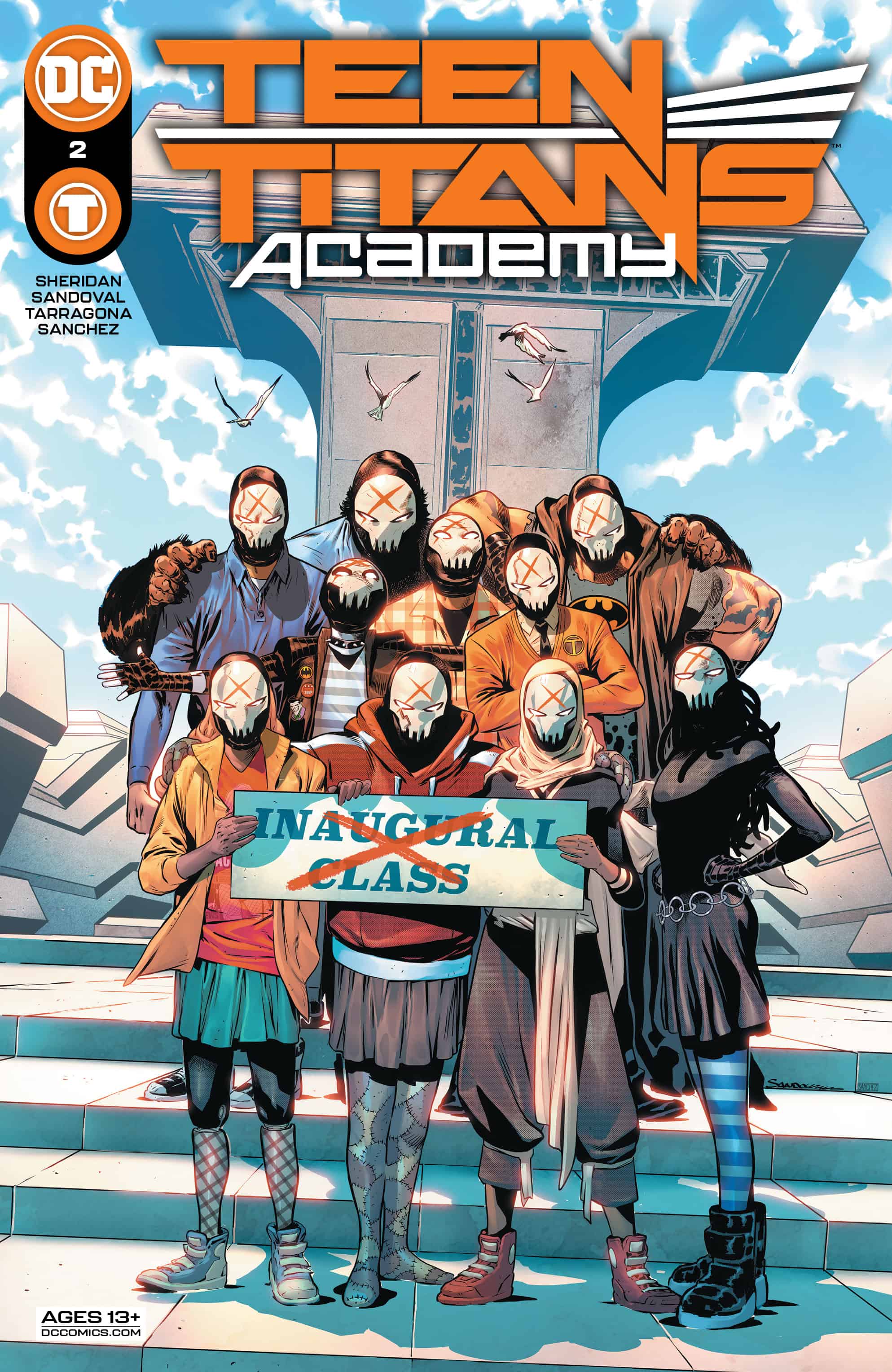 The new Teen Titans Academy has barely opened its doors, and it already faces its first threat in the form of the mysterious Red X! But that can't be, because Red X was Nightwing in disguise, right? So... who IS the new Red X, and what does he want? Nobody is safe!

Writer Tim Sheridan and artist Rafa Sandoval are off to a slam-bang start to their Teen Titans Academy series. Two issues in, and they’ve done a fantastic job of not only building this new world for the Titans that feels like a natural outgrowth for the team, but they’ve also seeded a world-class mystery to hook readers in. The hook “Who is Red X?” may sound straightforward, but that couldn’t be further from reality. There’s a deep, dark, twisted mystery here, and Sheridan knows how to seed it just right so that it hangs over everything with a sense of ominous foreboding and dread. The opening scene of this issue, especially, is a master class in building tension, expertly rendered by Sandoval. Red X isn’t just a name drop for fans of the old Teen Titans animated series – he, whoever he is, represents a true challenge for the team.

And what a team it is. This is old school Titans, straight out of the Wolfman/Perez playbook – and while all of the personalities fans know and love are intact and playing off one another in note-perfect harmony, the change of the setting completely upends what can be expected from these beloved characters. (Well, except for the part where it didn’t take Dick and Kori long to hop in the sack. I wish I had that kind of energy.) And that’s a perfect idea – taking something familiar and making it fresh again by changing up the landscape. For readers perhaps a little wary of this new direction, relax: Sheridan and Sandoval know what they’re doing. The characterizations ring true across the board, and this new dynamic changes the team’s calculus in an exciting way.

It also creates opportunities to create the next generation of fan-favorite characters, with the wide-ranging student body. If there’s anywhere TTA stumbles a bit, it’s that it doesn’t have enough space yet to fully flesh out the student characters. Sure, there are bits and pieces here and there – Bolt and Matt Price are given some decent panel space this issue, and make solid first impressions. But there are so. Many. Students! that it doesn’t take a prophet to see that many of them are going to remain background characters, or not be as fleshed out as some of their counterparts. The senior class, especially – I.E., the kids from the last volume of Teen Titans – have had short shrift thus far, which is disappointing considering how much I’d come to love them. (Also – side note to Sheridan – let’s resolve to get Djinn back in the mix, okay?) This is something of a given considering the sheer number of characters in the book, and two issues in, Sheridan has done a fine job of not trying to overload readers with information. With any luck, many more characters will come to the forefront as time goes on, and this book will grow and mature into something really spectacular and unique. At only two issues in, it’s too soon to make a declaration of that sort of status just yet – but it’s definitely something that’s in the cards. Don’t let Teen Titans Academy pass you by.

Teen Titans Academy #2 doubles down on both worldbuilding and mystery, as the Red X makes his first move. There is something for fans of every era of Titans to love in this book!

Teen Titans Academy #2: You Can’t Have Any Pudding If You Don’t Eat Your Meat!