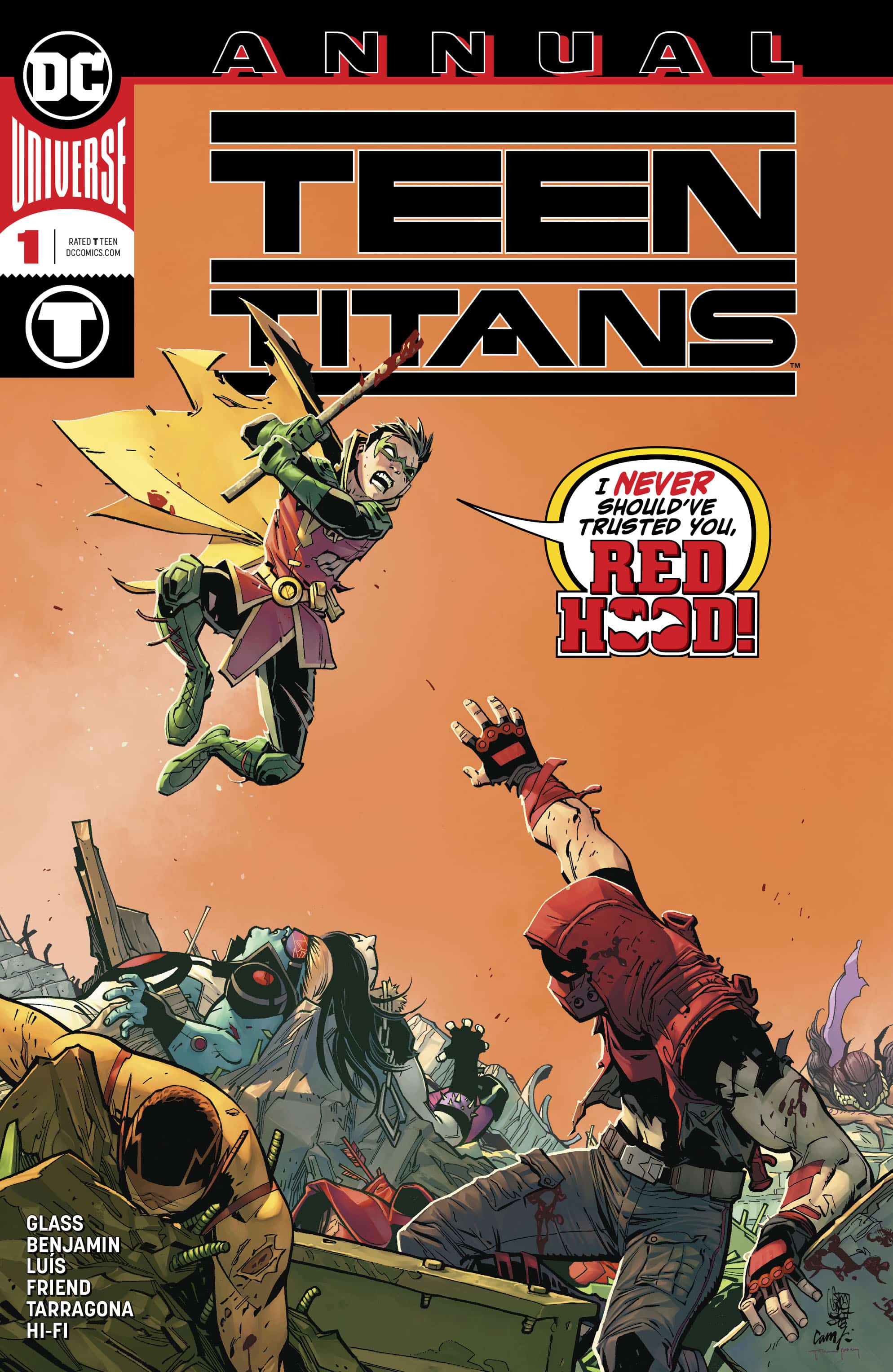 After deciding that the Red Hood betrayed him and the Teen Titans to the mysterious crime boss known as "the Other," Damian Wayne is a boy on a mission - to confront his alleged betrayer - Jason Todd, the second Robin! 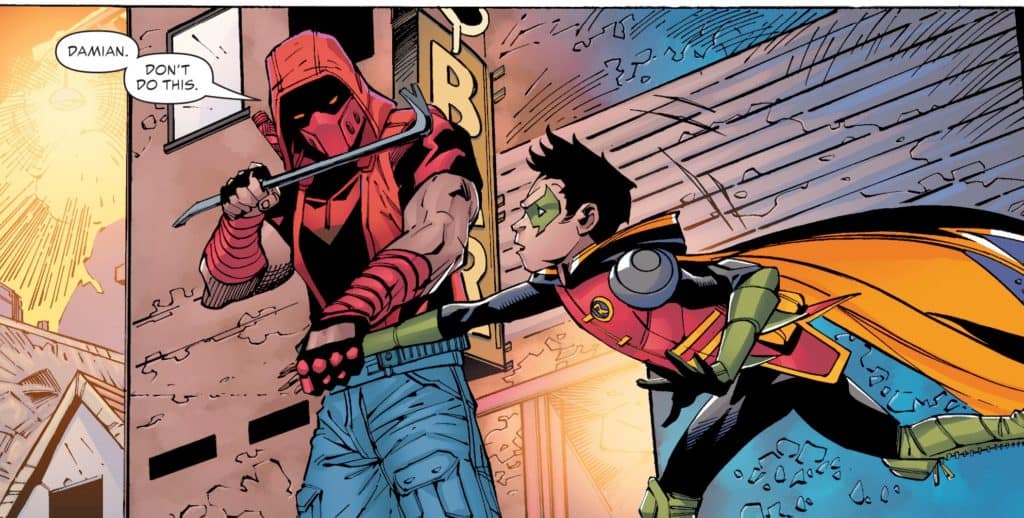 In the annual's second story, the rest of the Teen Titans confront a mind-controlling villain named Joystick. Despite his name being something of a puerile joke, he proves to be a formidable opponent, taking control of Djinn during their fight! 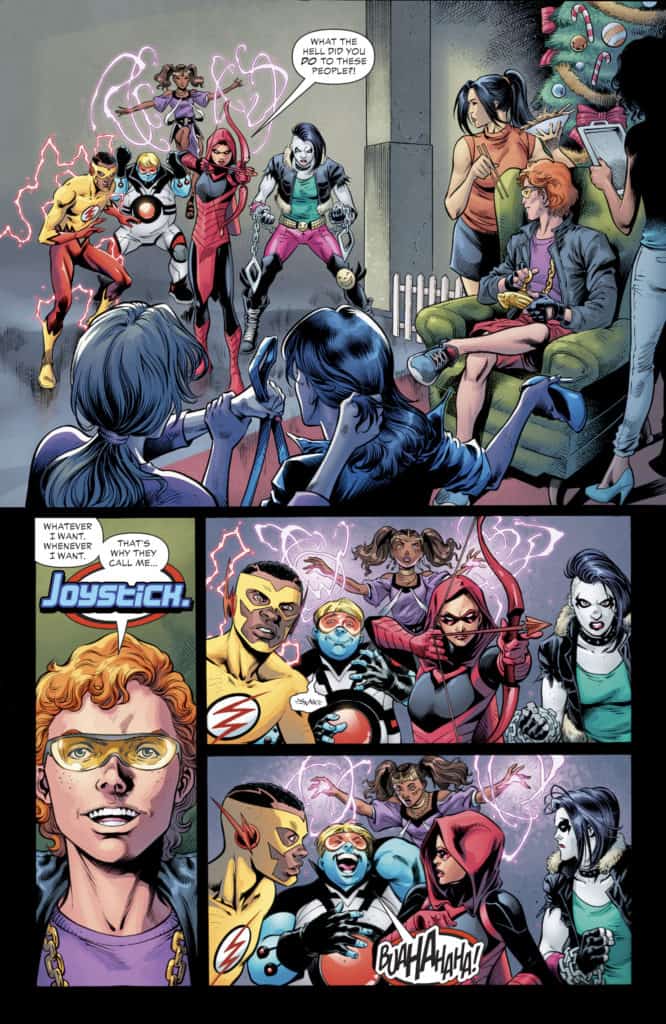 The previously lopsided fight takes a dangerous turn against the Titans, as Djinn, under Joystick's thrall, is quite a formidable opponent... 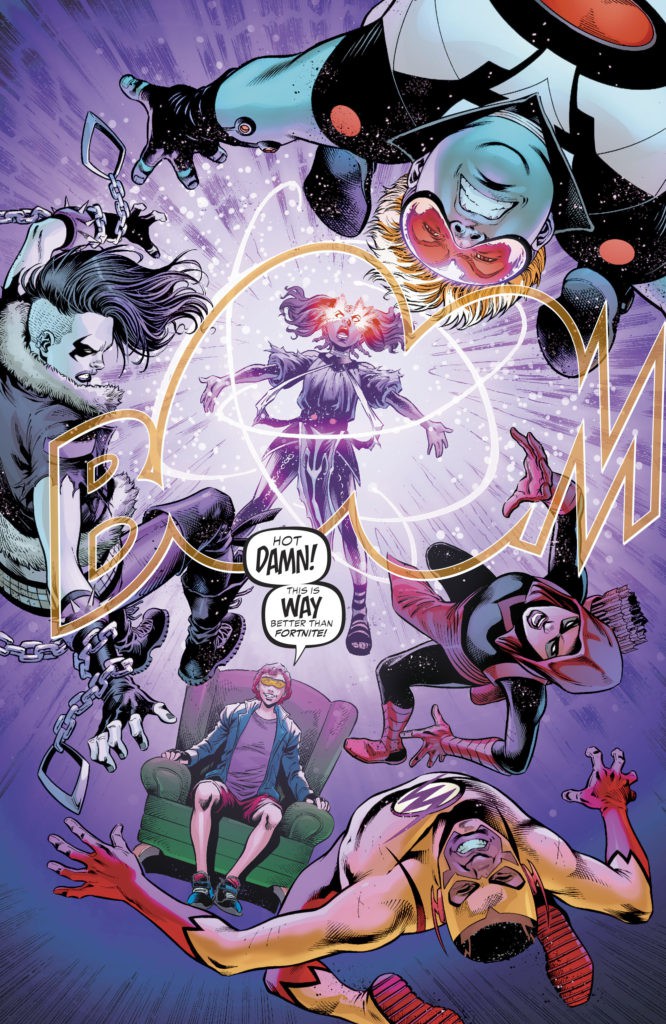 But when Joystick threatens to reveal Djinn's darkest secrets, that's when things get REALLY interesting!

Despite years of growth as a medium, despite increasingly complex narratives and despite deepening character depth, there’s one thing that comics never seem to outgrow – heroes fighting one another due to a misunderstanding. These Misunderstanding Fights are a time-honored tradition, gleefully playing off of kids’ “Who’s stronger?” arguments of yore and stubbornly refusing to grow up. (Heck, at this point Marvel practically has its own subdivision of comics dedicated to heroes knocking each other around.) But there’s a reason the trope persists: there’s a basic joy in watching our favorite heroes punch each other rather than the bad guys. It flips the script on what they’re supposed to be doing, and gives us a dirty little out-of-the-ordinary and vicarious thrill instead.

And, it settles time-honored arguments such as, “Who’s stronger, Hulk or the Thing?”

All of which brings me to this year’s Teen Titans annual’s Robin vs. Robin throwdown. This confrontation has been brewing for a little while now, ever since Robin felt the Red Hood betrayed him to the Other, selling his and his teammates out to that enemy in advance of their attack a few issues ago. Red Hood didn’t, of course, but try telling Damian Wayne he’s wrong about something. 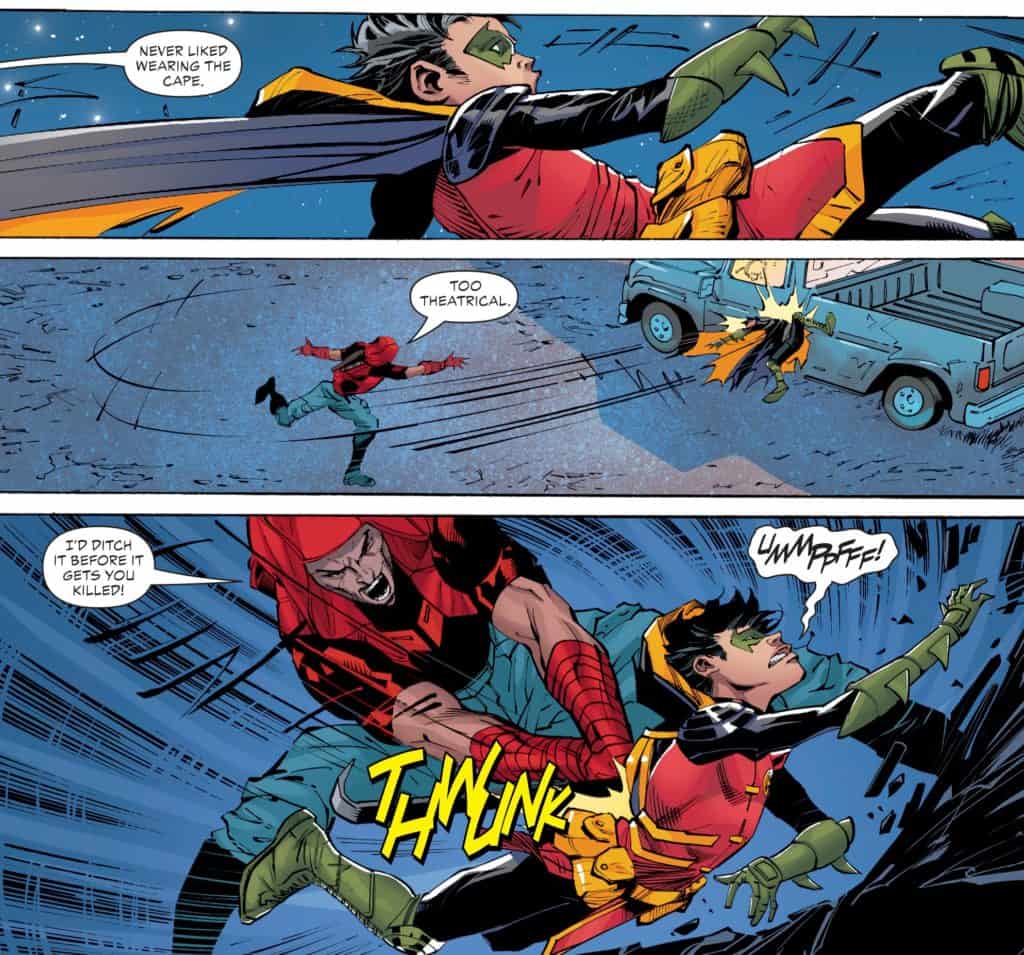 The fight has a pretty generous ebb and flow to it, which I think works in its favor and highlights the differences between Robin and Red Hood. Damian is more than willing to fight dirty, pulling some shenanigans to emotionally manipulate Jason; Red Hood in turn uses his size and experience to his advantage and is more of a blunt instrument. It’s not the greatest Misunderstanding Fight in the history of the comics, but the added drama of having two Robins wale on each other is a base thrill unto itself. As a set piece for dramatic confrontation, it works.

The second story (both of which were written by regular series scribe Adam Glass), is on a bit shakier ground. The “villain who mind controls people” trope isn’t anything new, and unfortunately, Joystick doesn’t bring much original to the game other than his name being a joke for Roundhouse’s amusement. He’s more petulant and obnoxiously entitled than a genuine threat. It’s not until he assserts control over Djinn that the fight becomes anything other than lopsided.

The slowly unfolding drama of Djinn’s secret past isn’t necessarily the most thrilling narrative at this point, because it’s something we’ve all seen before. So it’s a bit of a game of wait and see with that one; Glass has been on-point enough with this series that I’m more than willing to give him a chance to to let this one simmer for a bit.

What does work, though, is the growing interplay between these rookie Titans. The Titans for their entire history have relied on the idea that the characters aren’t just comrades-in-arms, but a kind of family. That’s hard to pull off with established characters, let alone ones who are mostly brand-new, but Glass makes no bones of showing these new kids growing not only into their roles as heroes, but into their relationships with one another. It’s a true pleasure to watch these young people interact and grow; I hope they survive the finnicky vicissitudes of the medium and last long term.

Though something of a mixed bag in terms of overall quality, there's enough meat on the bones of these stories to justify the extra dollar price tag. Adam does a great job moving his subplots running, but if you were expecting a conclusion to the Robin/Red Hood/The Other story, you'll be a bit disappointed.