TEENAGE MUTANT NINJA TURTLES #116: Under This Pale Gray Sky, We Shall Arise 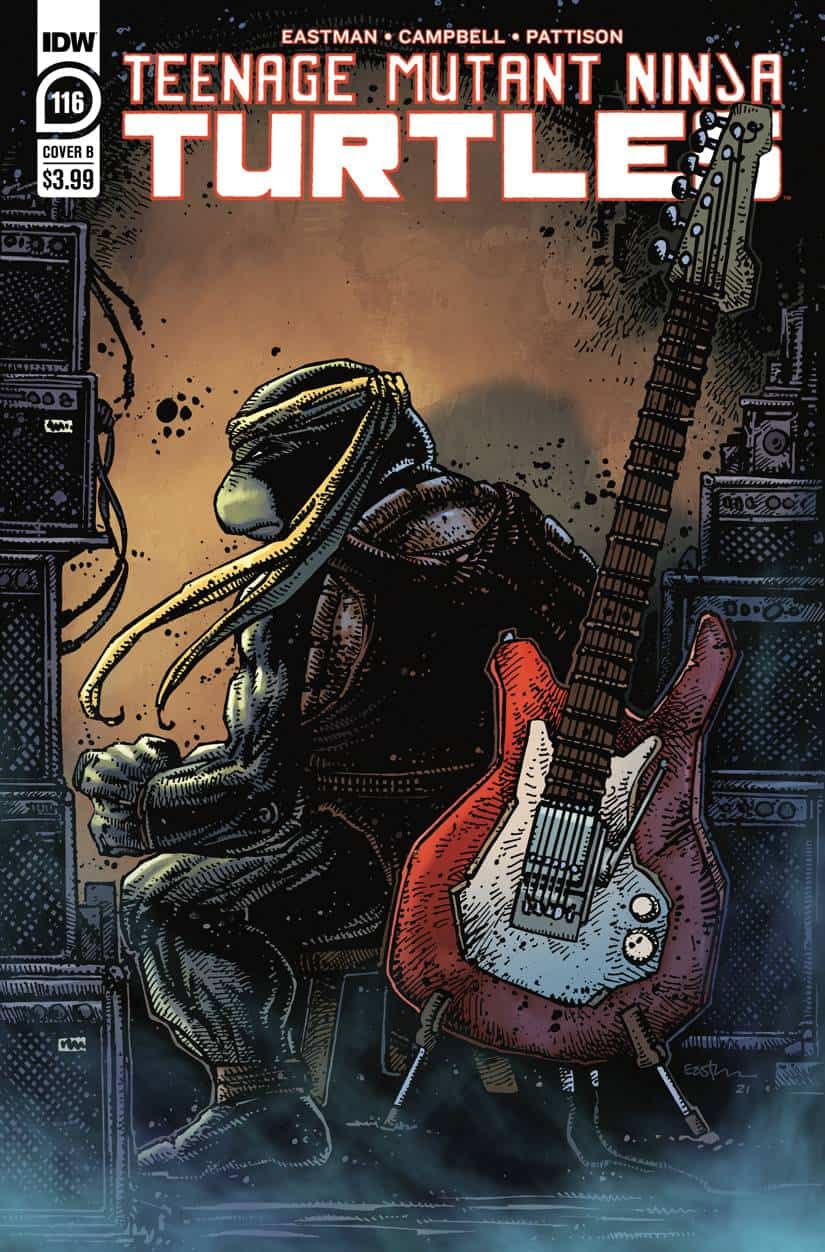 If it’s too loud, well…then leave! The band is formed, picks are in hand, and the speakers are turned to 11. Now, all we can do is wait for the lights to go down, and the circle pit to begin.

I say, we’re growing every day
Getting stronger in every way
I’ll take you to a place
Where we shall find our…roots, bloody roots

We use the term heavy to describe many things in life. The emotional value of the word seems to be immeasurable. Look at Marty McFly and how many times he says the word. Remember when you went to concerts? Seems like ages ago you went to see your favorite band and they played your favorite song, you looked to your buddy and said “man, that was so heavy!” Well, that is what we have with this latest issue of the Teenage Mutant Ninja Turtles.

We have arrived at the formation of Jenny’s band and gear up for the most epic battle of the bands that the world has ever known. The depictions of Jenny’s feelings not only when she sees Donny and Lita but also when she’s playing, really dives into the deep end of her mind and soul. This is what we have been waiting for for so long. It’s not enough to just window shop, we shellheads need to find out just who Jenny really is now. With issue 116, the doors are open, and ready for business.

Jenny’s past is no secret. Her struggles have played out on these panels and in some ways, her struggles have become our struggles. Stay with me, I promise I’m making a point here. For years readers have resonated with comic books and their characters. Jenny is becoming one of those characters and in this issue, we start to see a bit more of the emotional luggage she carries, and the demons with which she wrestles with. On a daily basis we are faced with our own demons and the burden of trying to best them in battle. It’s not always easy to recruit help with these inner battles. But when we do, it feels like a grand force of allies, a warband if you will, that stands with you through the toughest battles. Seeing Jenny take that leap of faith is not only refreshing to the soul but reinforces why we love the Teenage Mutant Ninja Turtles. We grieved when Master Splinter passed on. We felt emotionally depleted with the family as they found out how to grow and become newer, stronger, and better. Now we stand with Jenny as she takes on a feat so scary, so crazy, yet so important. Sophie Campbell, Ronda Pattison, and Shawn Lee have added such magnificent layers to Jenny and have made her struggles up front in such a way that when we see Jenny and her problems, we see a little bit of ourselves and maybe find comfort and strength in knowing and seeing what is possible when you stare adversity in the face and rip its heart out for the greater good.

Now for something really kooky…a hot take. Relax, we are keeping this a spoiler-free review. There’s a section in the book where Raph is talking with Lita (from the future) and is inquiring about Hob, and if he sees justice for the bomb. As the conversation ends there is a feeling (and it could be just me) that Jenny could possibly break away from the Turtles and do her own thing but still come around for cookouts and to help with the occasional foe. Think along the lines of Wolverine. I know this is an extremely hot take, but the way Sophie writes I would not put it past her to completely blow our minds once again with her devilishly creative direction. My favorite panel deals with Karai and Jenny, once again spoiler-free. The last panel (the one where she walks away after the conversation) is just magnificent in execution. Jenny’s eyes, facial expression, and you literally can hear her voice as she leaves…I mean it’s just such a rad panel and another reason why she has become my favorite turtle (don’t tell Donny).

Another great installment and sets up #117 beautifully. I think we're due for another shocking event that will shake things up a bit and I believe we are seeing the building blocks for that very event.

TEENAGE MUTANT NINJA TURTLES #116: Under This Pale Gray Sky, We Shall Arise