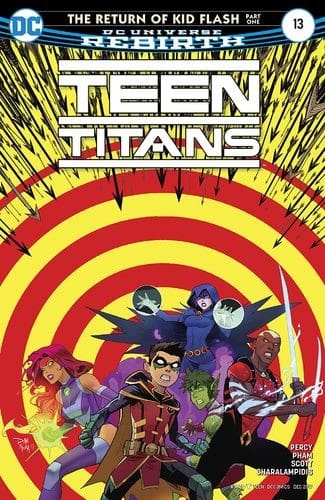 The Teen Titans have elected Starfire as their new leader and she’s laying down the law with Robin: bring back Wally West!  But the son of Batman has his own idea for a new teammate—Emiko Queen, the Red Arrow!

Following last issue’s crossover with METAL, “Gotham Resistance,” the Titans are back at Titans Tower.  Fed up with Damian Wayne’s arrogant leadership as Robin, Starfire has taken over as leader of the team.  They all want Kid Flash back in the Teen Titans.  Robin scoffs and tells them fine, go get him.  But secretly, he flies off on the back of Goliath to Star City in search of a candidate recommended to him by Green Arrow:  Emiko Queen, AKA Red Arrow.

We open with a splash page showing Robin holding a bloody sword and all of his fellow Teen Titans lying dead on the ground.

This turns out to be a holographic simulation for a computerized training session.  In walk the very much alive Teen Titans led by Starfire.  They take turns giving Damian Wayne a lecture on how teamwork should work.  Robin dismisses all this talk of feeling safe and respected by growling at Starfire that if they want Kid Flash back so bad, then go get him.  We cut to Central City High School where the teacher notices Wally West is yet again absent from class…only for him to sneak into his seat at super-speed while her back is turned.  After class, she doesn’t let this slide and gives him a lecture, plus some unsolicited advice on how he should maybe join the soccer team.  Wally smiles and says he’s not really into team sports.

Miles away off the coast of Star City, Robin and Goliath are swooping in on Emiko who’s in hot pursuit of a bomb-filled truck placed on a boat by Onomatopoeia.  She pins the villain to the wall with arrows and drives the truck off the boat and into the ocean where both the truck and Emiko began to sink underwater.  That’s when Robin has Goliath dive in and rescue her.

Back in Central City, Wally has changed into his Kid Flash costume to stop an armored truck robbery.  That’s when the Teen Titans show up to help out.  Flashback to Robin giving Red Arrow his sales pitch to join the Teen Titans—which she promptly shuts down by A) pointing out that if it’s his team she doesn’t see any team by his side and B) she’s already on Team Arrow so she sees no reason to join the “Junior Varsity.”

At the same time, the Teen Titans are pleading with Kid Flash to rejoin them.  Wally, however, is quick to say no stating he’s got a ton of regrets and that he fears he’s got more of his father, the Reverse-Flash, in him than he’d care to admit. So, he’s better off on his own.  Each member makes the case why he should come back, but it is Raven who has the most convincing argument that he’s only in danger of becoming like his father if he focuses on his regrets about the past instead of his future with the Teen Titans.  Wally says he’d consider coming back on one condition… 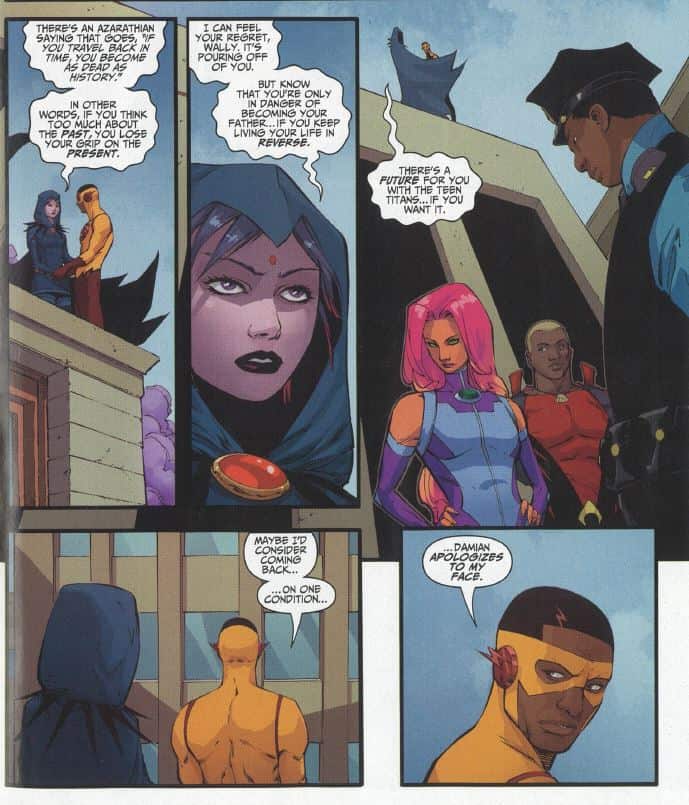 The issue ends with Red Arrow getting a message that Onomatopoeia escaped and left a message revealing his true plan which she has unwittingly helped him pull off by sinking the truck.  The bombs explode and launch a tidal wave toward Star City

Like Kid Flash, this story moves quickly and doesn’t dawdle.  Percy writes tight scenes and efficient transitions that tie everything together and keep the narrative flowing beautifully. Each character does a bit of exposition, but that isn’t heavy-handed or cumbersome (a vast improvement over last summer’s clunky, forced and ludicrous Lazarus Contract crossover). There are bits of the characterization that are unfortunately all too predictable—such as constantly using lines to portray Starfire as naïve and unworldly about life on Earth despite years here—yet for the most part, the depictions read as appealing, believable and undeniably charming.  Yes, Beast Boy’s still cracking tired jokes, but Percy writes him in a way that’s winning and likable and implies that he badly needs love and approval.  It works.

Big bonus points for the scene of New 52 Wally West demanding that the team make Damian Wayne apologize to him.  Percy gives him some backbone that compliments his genuine regrets in a way that makes the character a bit more complex.  Also, the clear affection and hints at romance between Kid Flash and Raven are a shrewd and potent homage to the Wolfman/Perez Titans.  Again, this works.

Percy having Damian point out the similarities between him and Emiko is smart and enlightening.  With Percy writing both TT and Green Arrow, I hope we get more interaction between these two.  The comparison and conflict between them work nicely and was fun to read.

Most important of all, Percy manages to avoid a tired Titans trope about infighting on the team.  He does not heighten the melodrama.  Characters do not scream and yell. We get no implications of someone leaving the team “forever.”  There are no maudlin statements of how members can’t get along anymore or threats of “It’s over! I quit!! Goodbye!!!”  Instead, we are shown teens arguing the way teens would, giving each other a hard time, making demands and teasing one another in a reasonable way without histrionics.

The Teen Titans are a family.  They’ll fight and picker, but in the end, they all come together and work things out.  Thankfully, in Percy’s run, they keep the hokey soap opera to a minimum and manage to stay together through disagreements.  Unlike Dan Abnett’s Titans, the DC Rebirth Teen Titans has, for the most part, felt more like a compelling team of friends who act as family. The characters’ relationships do not feel forced and there is real promise in terms of where these relationships could strengthen and grow.

I would be remiss not to also praise Khoi Pham’s pencils and Trevor Scott’s inks.  Prior to this for some reason, DC had Phil Hester doing layouts first for Pham to finish.  The results of that jarring combo were very hit-or-miss as the two pencilers had uncomplimentary art styles.  With Pham back to doing full pencils and now paired with Scott on inks, the figures are looser and the panel-to-panel narrative moves more smoothly.  It also helps that Jim Charalampidis is one of the best colorists in the business and his colors add depth and subtlety to Pham and Scott’s lovely art.

Final Thought:  Ben Percy turns in strong work making Teen Titans a credible and satisfying team despite leaning heavily on characterization clichés from the animated series (guileless Starfire; snarky Beast Boy). The Kid Flash/Raven flirtation has potential to grow.  Aqualad fits in like a glove. The banter among the whole team is plausible and engaging.

This issue set up events for the next chapter, but it never read as dull or plodding.  Throwing in classic Green Arrow villain Onomatopoeia was a nice touch and the interaction between Damian and Emiko worked well, too.  Top it all off with strong artwork from Pham, Scott, and Charalampidis and you have another good issue in what has been shaping up to be one of the better runs of Teen Titans.