Terminator: Sector War #3: The Enemy of my Enemy 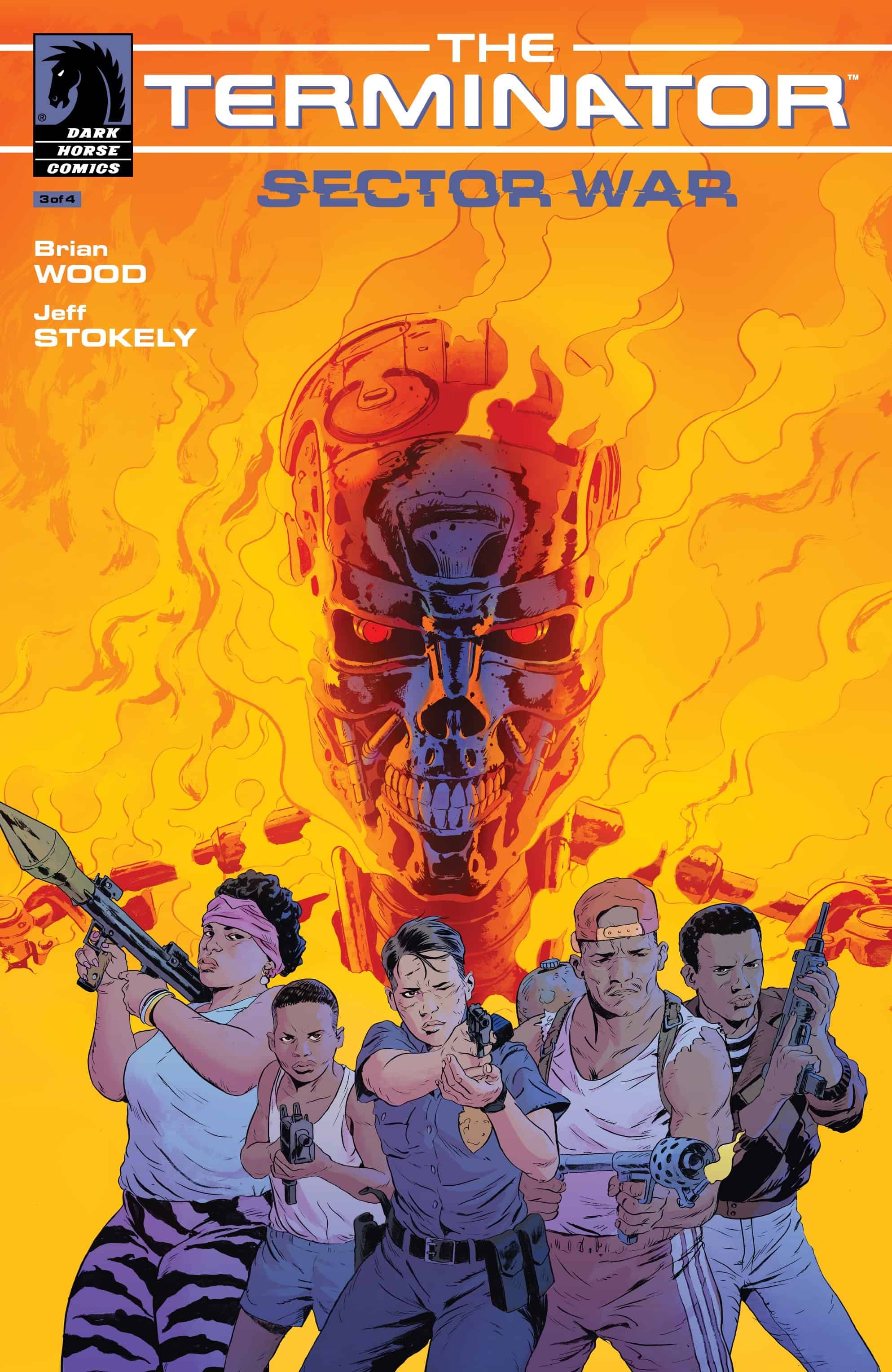 Lucy Castro runs headlong into the one man who she believes can help her against the hunter that has her in it’s crosshairs. But to gain his aid she must choose to do the one thing that goes against her core belief as a cop. For the sake of her unborn baby, who she now learns from the very thing hunting her is a girl, she sets a trap to try to destroy him. When this doesn’t go exactly as planned she bolts for the only other place she can think of. The subway tunnels. 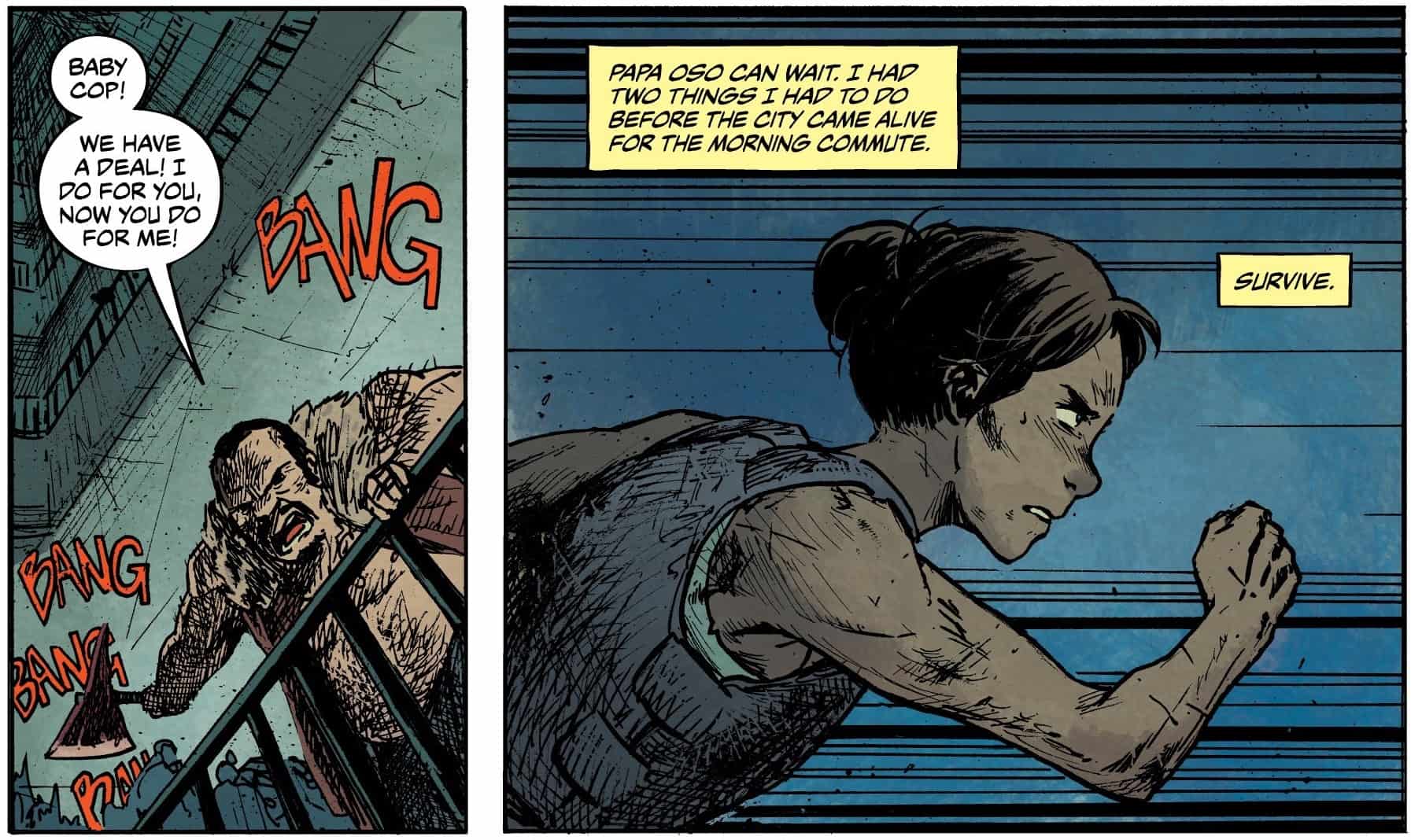 My overreaching worry upon learning of the huge gap between the last issue and this was…will I still care? The answer was Hell Yeah!! The narrative was very believable and the action fast paced. So much so that it ensured the buzz was still there and I was once again immediately invested in the plight of Lucy as a character. And I also found the plot engaging enough as to keep me guessing about the outcome and believed in the unfolding drama enough to keep rooting for her. From the use of the taunting graffiti and tripwire scene, right up to her plunge to escape I was fully invested in the story and the possible outcomes. 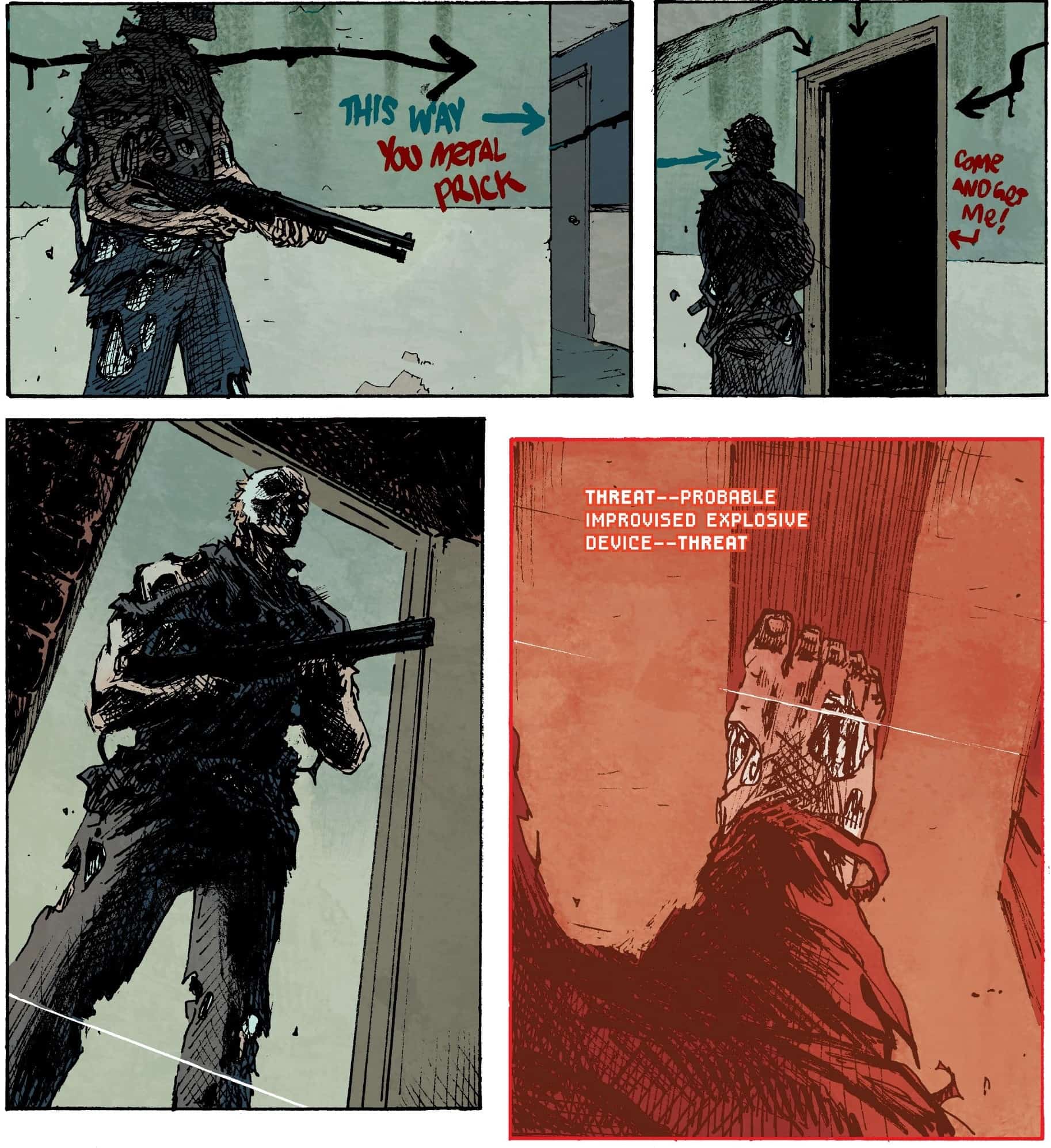 Brian Wood writes her in a way that makes for a reasonable investment in the character, despite the slightly implausible way in which she went about things at the start. Some have been asking why she just doesn’t go to the precinct, which on the face of it seems a valid point, but it’s worth remembering that this move didn’t go so well for Reece and Connor. Something of course Lucy would be unaware of. But she does know a little about how truly unstoppable her enemy is and so this slightly informs as to why she is reticent to involve her colleagues, or at the least any law abiding citizens who may get caught in the crossfire, which she actually verbalises here now for the first time. And so instead she leads him into the lions den of the criminal underworld. 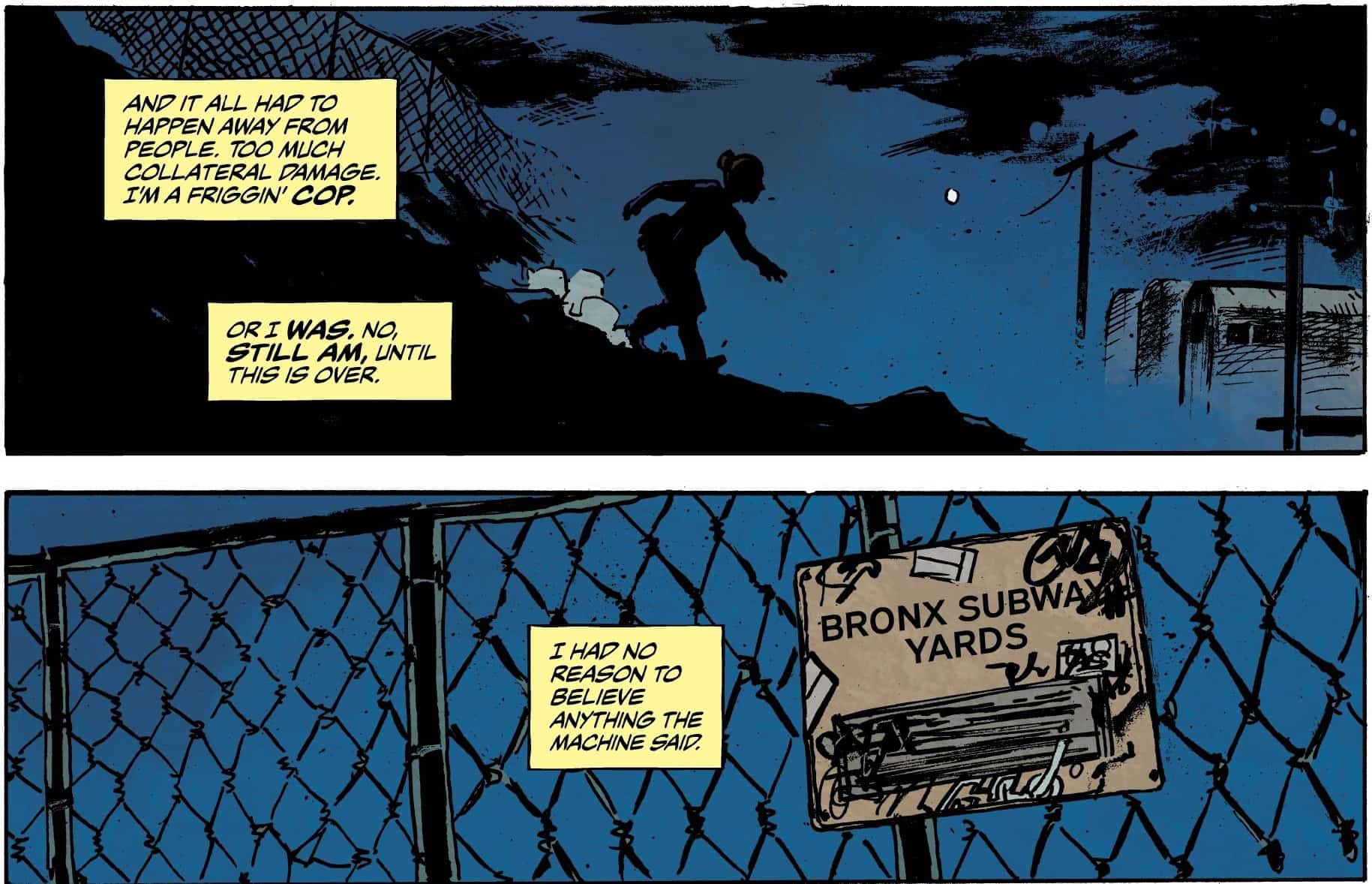 I also find it very interesting the Terminator looks into it’s data files to recover the location of the crime boss, only to find they reveal that he dies in his own home 8 years later. This indicates Lucy does ‘lose’ the evidence in lock up after all. But Oso should refrain from gloating about it. If the end result has the Terminator kill him it won’t matter. It’s a paradox for sure, even Kyle Reece could never get his head round that issue. Like Sarah before her…more accurately at the same time as her I suppose… Lucy IS certainly tenacious. I’ll give her that. Even in Papa Oso’s debt she doesn’t fully submit. Sat in front of the crime boss at his mercy and still she says “screw you”. But we all know why she is doing it and what is at stake for her 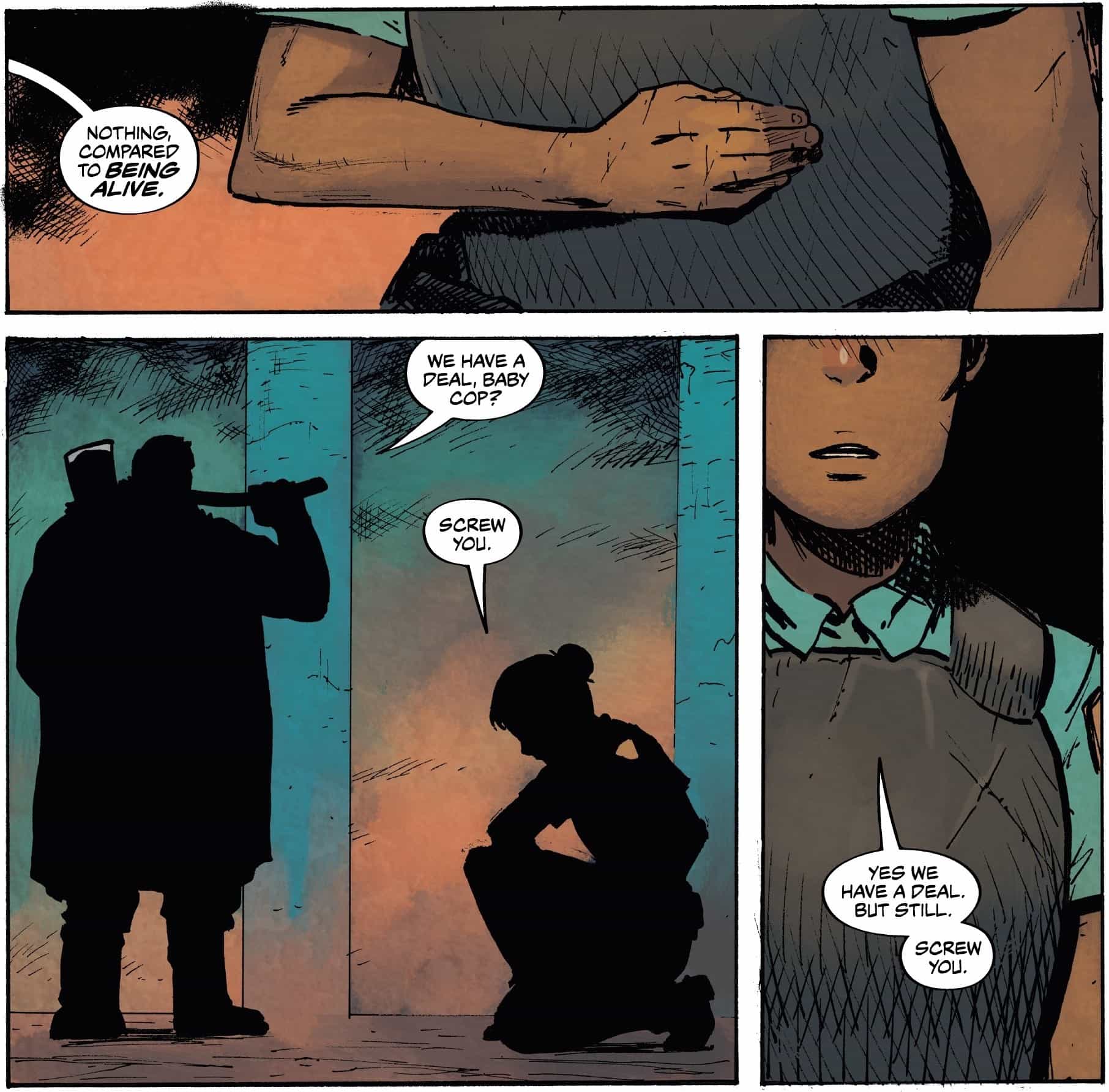 Nate Piekos is in fine fettle as he makes use of the Terminator text speak to inform us of its motives, as it discerns the whereabouts of Lucy at the start and Triona Farrell also gives the visual it’s iconic red hue. And she even injected some drama into the scene where Lucy plunges to the ground escaping the Terminator, using some dynamic coloring to the proceedings. Jeff Stokely also ensures this issue is as always perfectly gritty and edgy, with the tenement block looking like an impressive fortress. 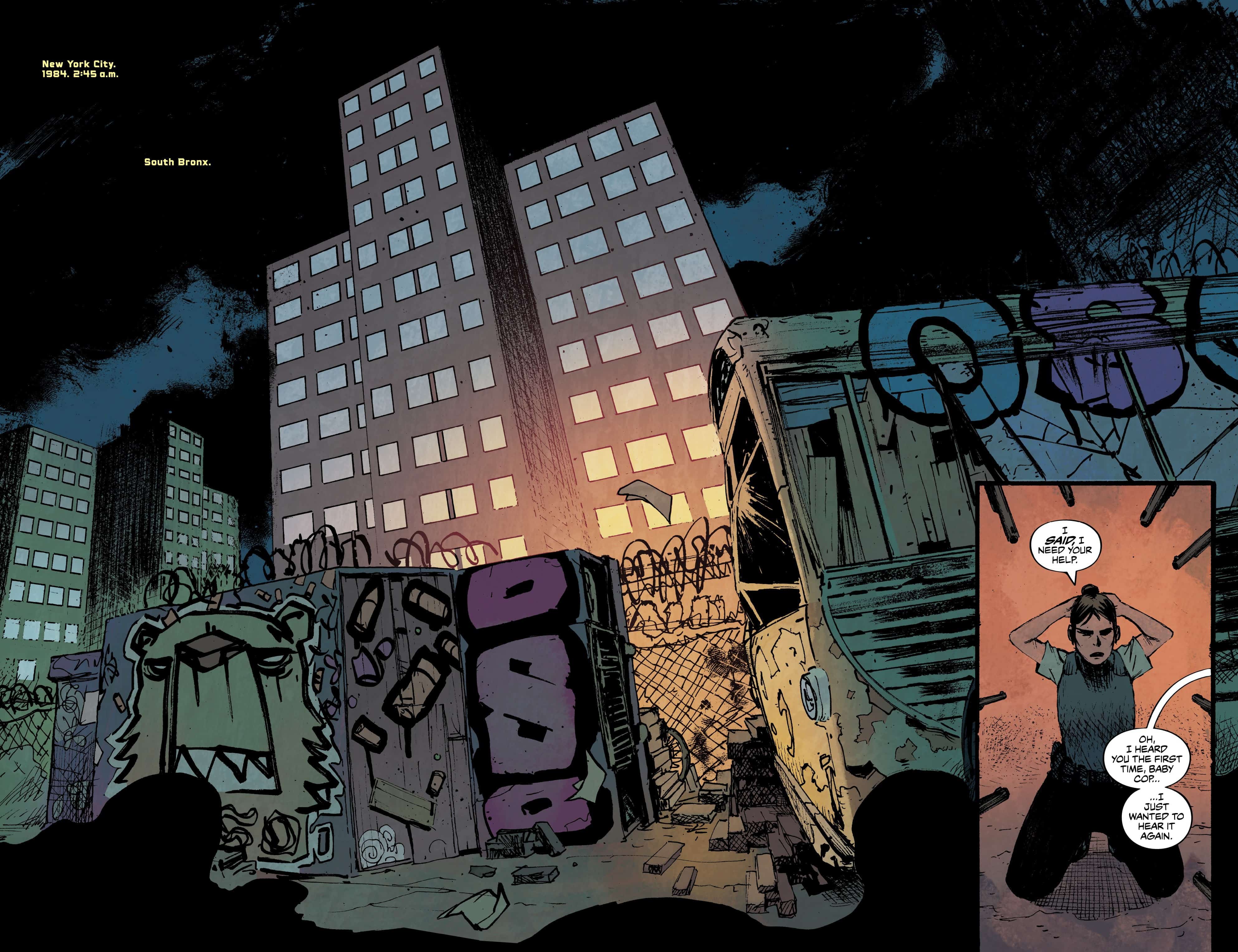 The firefight scene alone had so much going for it, but is added to by the sheer genius of the elevator scene with the build up to the peril as everyone waits above, as well as beginning it with the ‘bing’ moment. A familiar trope to cinematic action junkies everywhere and a nod to the genre. Thus creating a moment of surreal comedic timing that could only have benefited from the strains of some obscure easy listening rock song being played in the foyer and elevator. 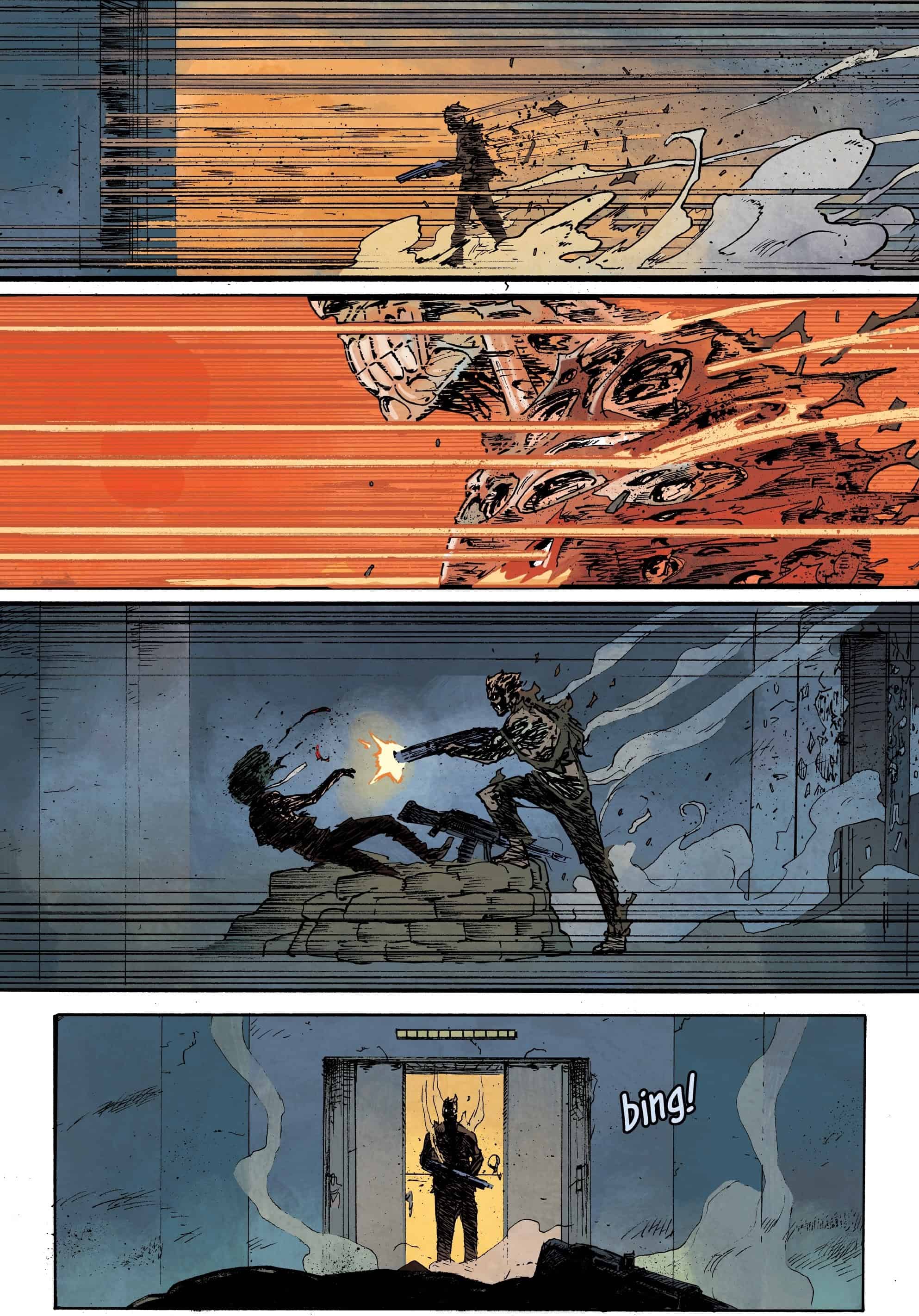 Also the tension is very well ramped up as Castro lures her prey into the trap with scrawls of graffiti. And we get a dramatic exit and reprieve for Lucy, despite the slightly illogical moment where the two opponents stand taking to each other to further explain the logic, as well as the twist that her child will be a girl. I can’t help feeling that this was a scene added solely to remind us of the reasons for the hunt in the first place. JUST in case we forgot since the loooooong space between instalments. I’m not bitter, honestly. And who could hold a grudge with such a great follow on? And also the amazing cover by Robert Sammelin alone was worth it, just for that cinematic image of the grinning endoskeleton looming over the gathered allies.

Was there a big delay between issues? Yes. Did it matter? Not really, no. Still managed to not only engage me, but also get me hooked all over again.

Terminator: Sector War #3: The Enemy of my Enemy