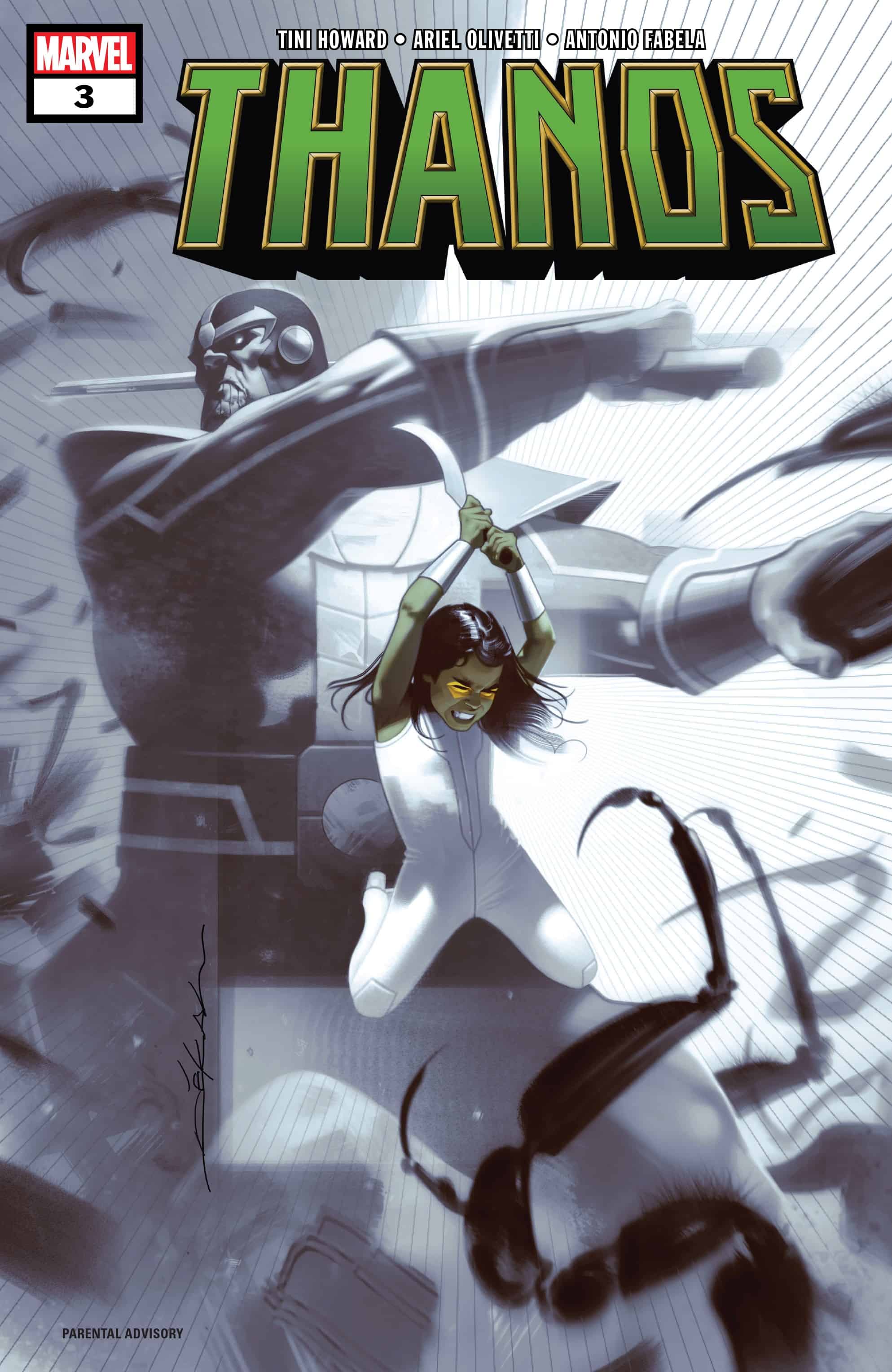 In a bizarre twist, young Gamora begins to harden and grow accustomed to her strange surrounds aboard Thanos' ship Sanctuary. Even more strangely, Thanos begins showing her affection as only he can, like when she irreparably breaks her leg: 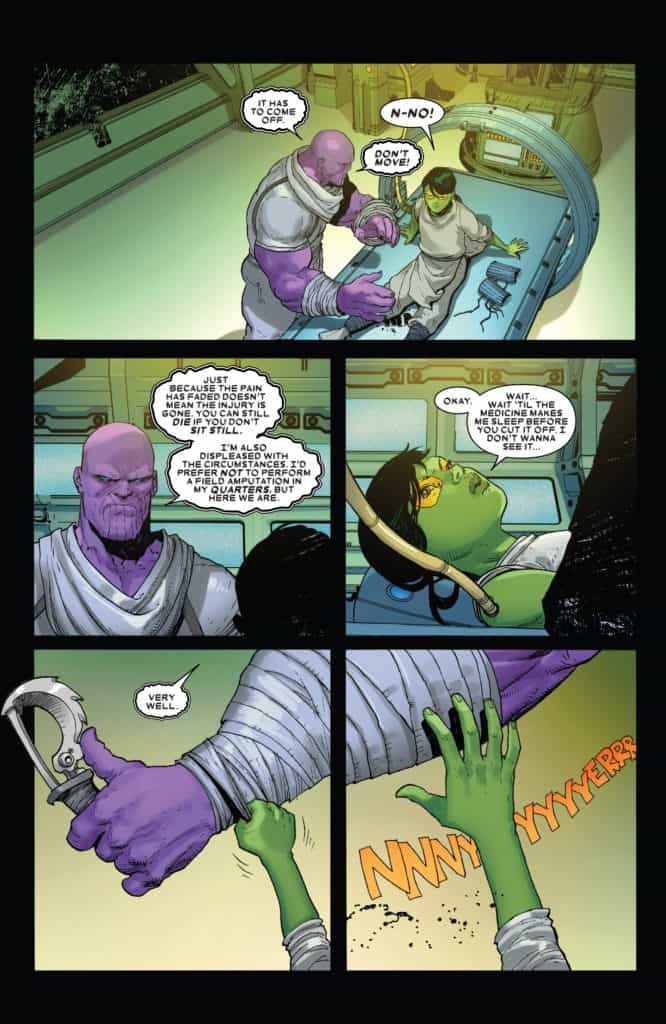 Magus, though, suspects something other than fatherly instincts at play here, even as Thanos denies it. 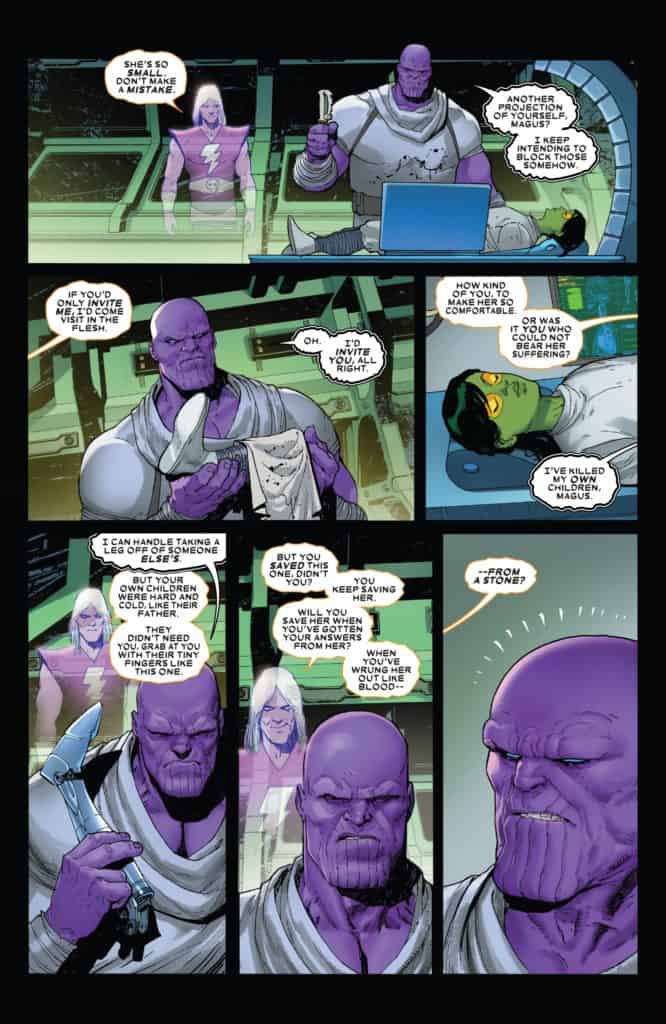 Thanos' crewmembers are noticing a change in their captain, too, as he continues to show favor to the strange green little girl. Three newcomers, though, see an opportunity... 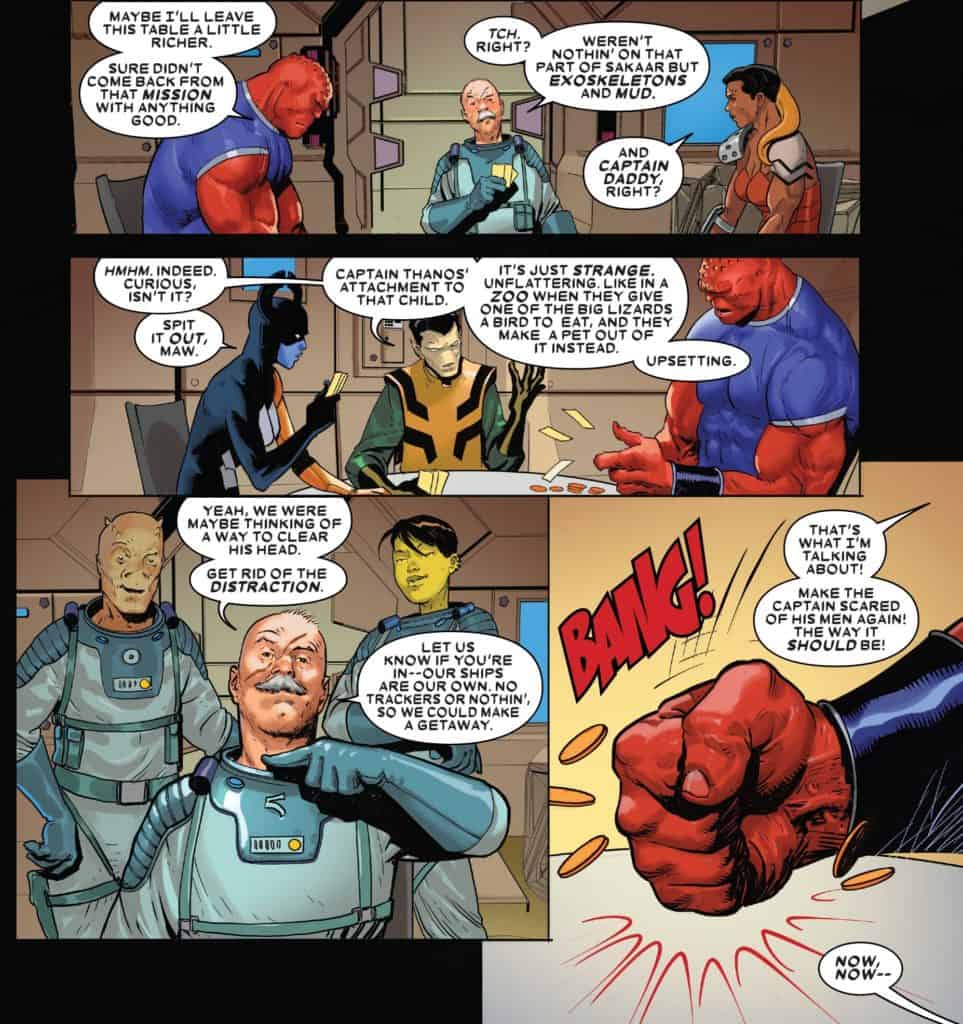 But Thanos might be too distracted by his obsession of using Gamora to see his beloved Death to notice the mutiny brewing right under his nose...

Writer Tini Howard begins to show why she was chosen for this particular Thanos story with this, the third issue. After two issues of surface-level characterization for the Mad Titan, she finally digs in and shows his backwards, awful, but weirdly endearing parental instincts, at least insofar as cutting off Gamora’s limbs and replacing them with cybernetic prostheses so that he can catch a glimpse of Death goes. In his own way, Thanos cares for Gamora, even if he can’t admit that to himself at this point. Shades of Infinity War, to be sure, but definitely still within the established bounds of his character without spoiling him in the name of corporate synergy.

It’s a shame that it took this long to get to this particular turn, though, for the series to at least begin to get some teeth and be worthy of its namesake. The Thanos/Gamora dynamic is the real crux upon which the story pivots; the B-plot involving Thanos’ crew and their ill-thought-out mutiny/kidnapping (which will end very, very poorly for a few somebodies) is pretty pedestrian by comparison.

A few things did strike me as off-key, though. I’m not sure, but I think Gamora having cybernetic limbs is a retcon; if it was done to make the comics character more similar to the movie, then it failed to do so because it’s closer to the MCU’s Nebula than her verdant sister. I like the warped way in which it endears Gamora to Thanos and ultimately if it is a retcon, it’s a relatively harmless one. I’m also baffled by Ebony Maw’s facile characterization; granted he’s younger here, but he’s traditionally portrayed as a stoic, serious type. His thinly-veiled contempt for Thanos and borderline-juvenile attempts to maneuver others against him feels greatly out of character. The same could be said to a lesser degree for Proxima Midnight, although in her case it’s less obvious because she says and does so little comparatively. This issue saw a great nod to “Planet Hulk” with the inclusion of the Sakaarans, too (even if they did just get slaughtered in their cocoons for the most part).

The art, though, just isn’t all that interesting though. Ariel Olivetti is capable of great heights (especially when painting – see cover), but for whatever reason the art falls flat for the third issue in a row. Perhaps at this stage of his career, painting is just the medium he’d prefer to work in, but for the most part a lot of the panels look rough around the edges/details, characters’ poses are stiff when they should be fluid and in motion, and backgrounds are largely left blank or given little detail. It’s not the dullest example I’ve ever seen, and it doesn’t swing too far in the other direction and over-render characters – so ultimately, it just comes across as safe. 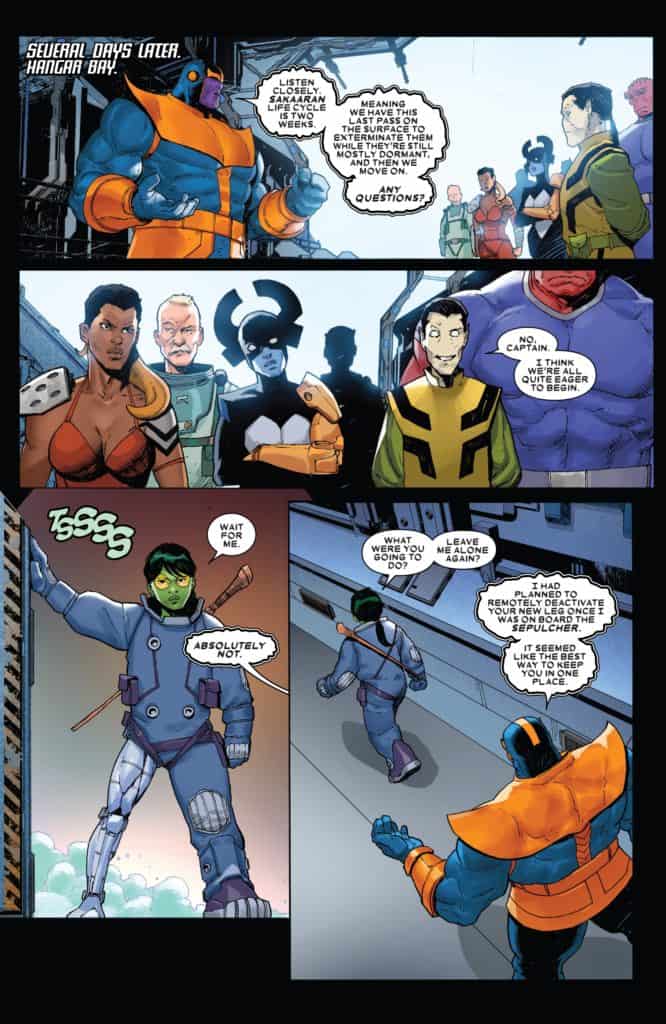 Thanos #3 makes moves in the right direction by focusing on the Thanos/Gamora dynamic, warped though it may be. But three issues in, is it too little, too late?