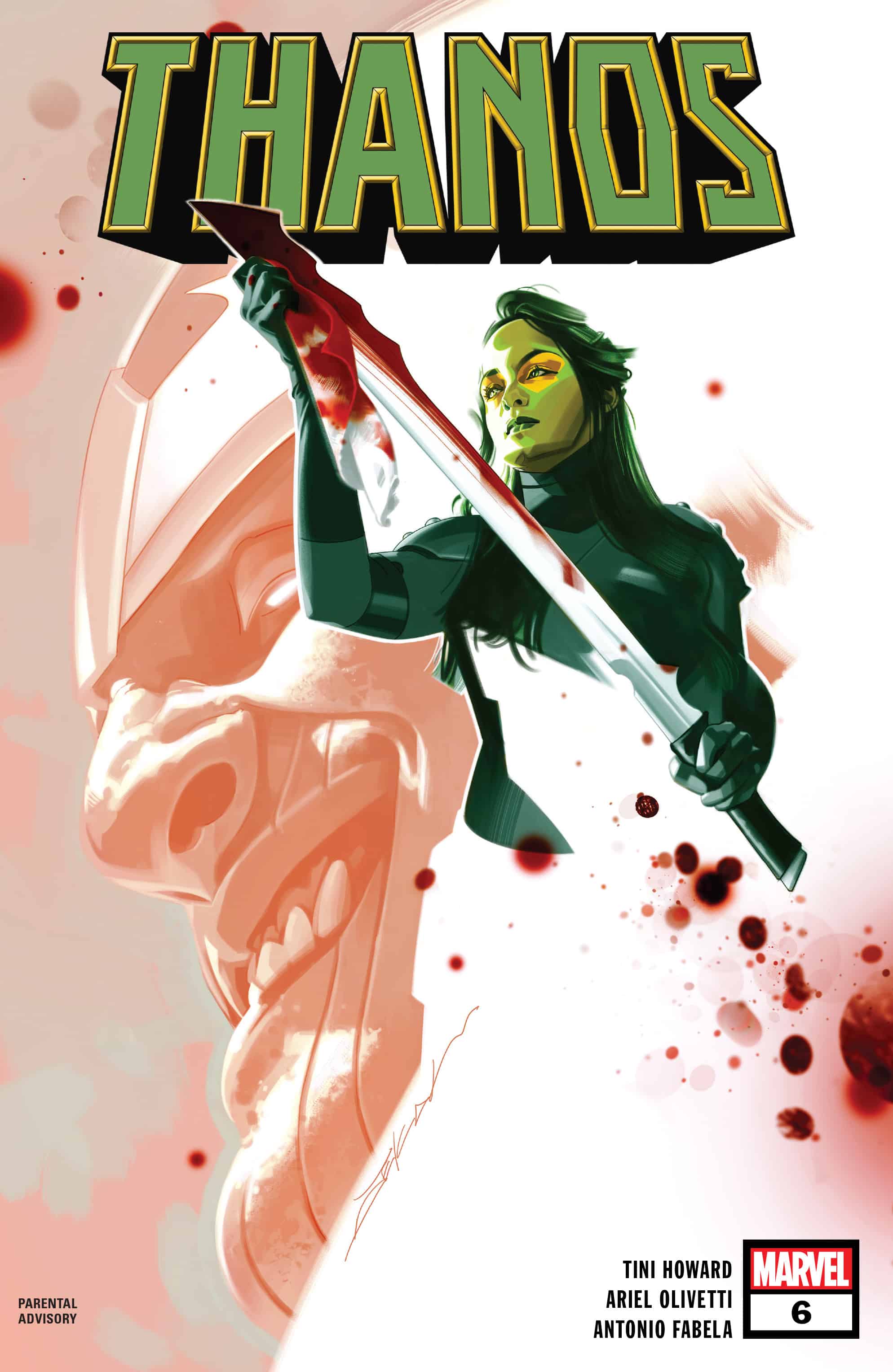 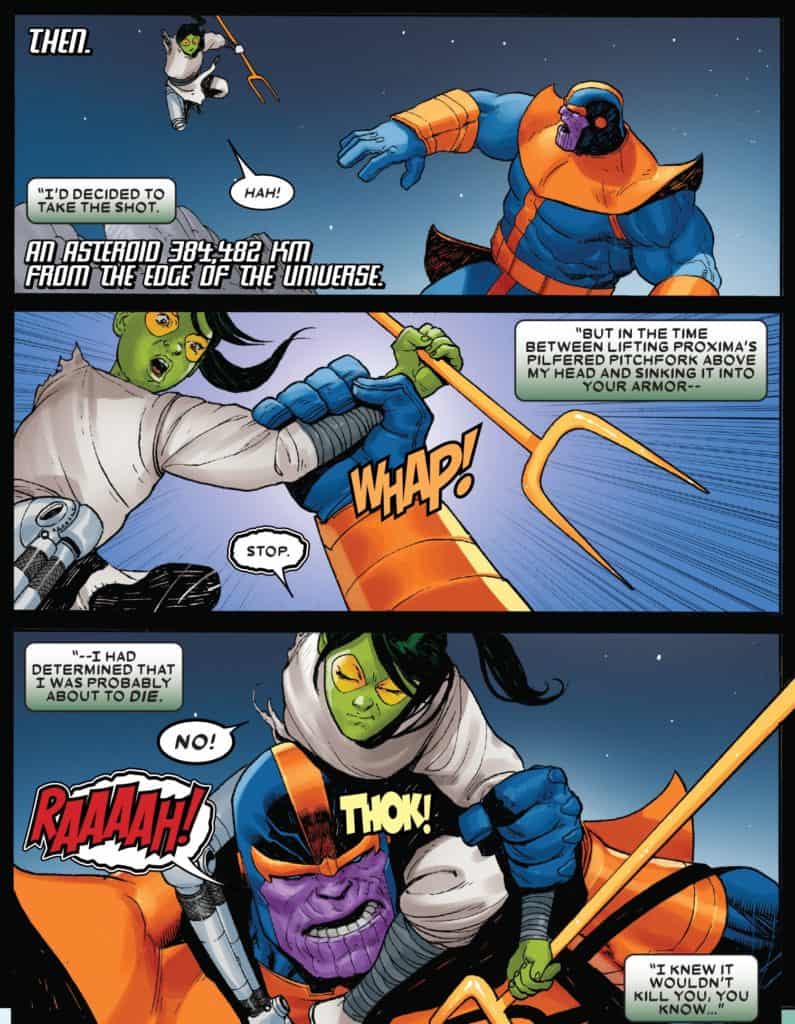 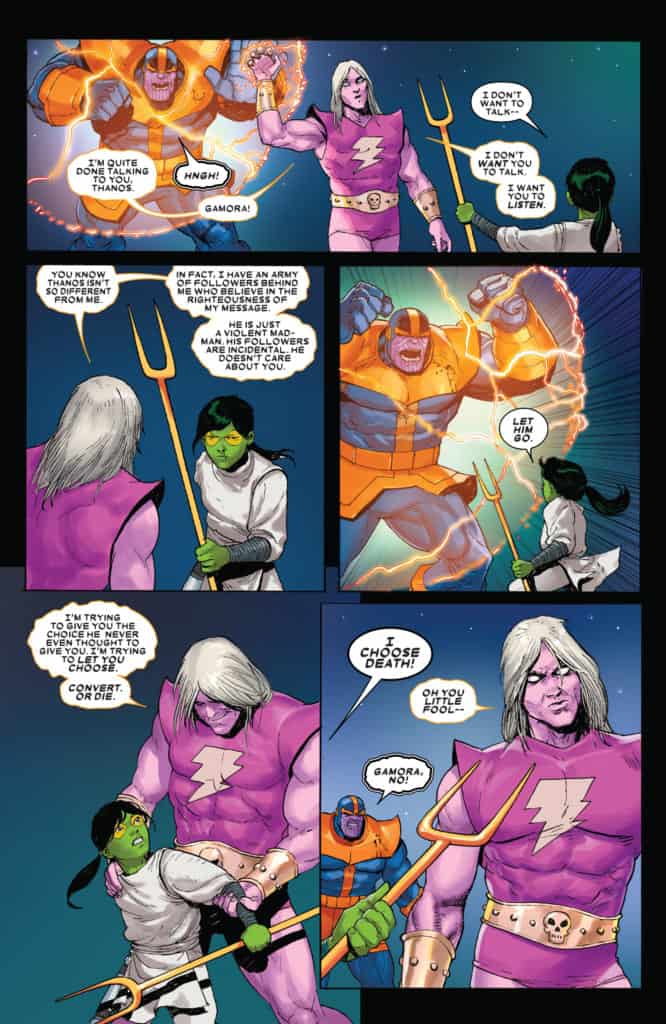 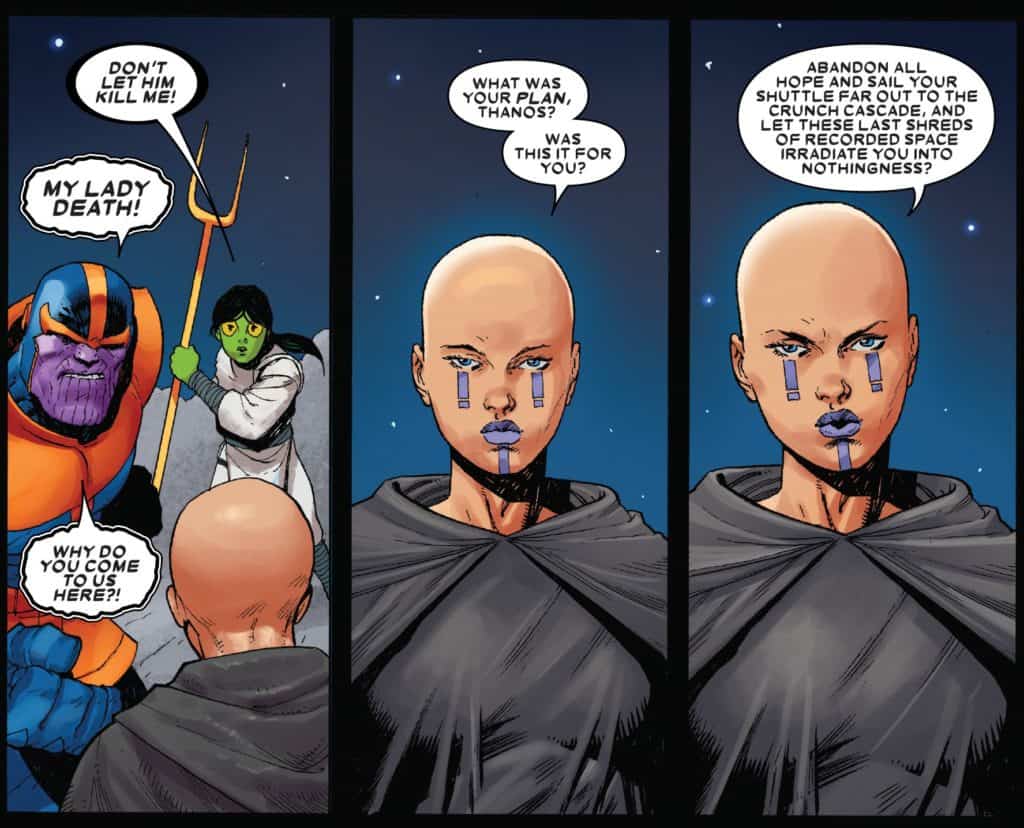 What will these past events have on today? All will be revealed!

Tini Howard’s  Thanos miniseries concludes here, going fairly predictably through the motions throughout. The title of the book continues to be something of a false flag, since Thanos is in it but the true star is Gamora. This is her story, how Thanos’ tender upbringing affected her into today. How she chose to stay with him despite how monstrous he was, and how together, they bested the Magus.

Really, it is Thanos who delivers the death blow to Magus, not Gamora – so credit where credit is due. But how he goes about defeating his foe could have been accomplished five issues ago, because it isn’t all that creative. For what it’s worth, though, it is pretty massive in its scope of destruction, and fitting for the Mad Titan’s crescendo against his similarly-hued foe.

But what about Gamora? How does she figure into all this, since in reality, this is her tale? Sadly, readers aren’t given much  in the way of answers. Ultimately (slight spoiler alert), she chooses Thanos over Magus because Thanos isn’t Magus, and that’s about it. She knows exactly what she’s getting with Thanos, whereas Magus is an unknown quality. He wants to use her outright for his own means, but Thanos is at least transparent in that he’ll protect for his own reasons. Maybe he has fatherly feelings toward her, maybe not – Howard leaves that up to the reader to decide, but that doesn’t exactly translate to a satisfying conclusion.

Similarly, nothing really comes of Proxima Midnight and Ebony Maw’s insurgency against Thanos. After all their (out-of-character) scheming in the shadows against their captain, Thanos actually promotes them to the Cull Obsidian, much to their surprise. His logic for doing so is spurious at best, the kind of thing that happens because the story needs it to happen and not much more.

So much potential has been squandered in this miniseries. A definitive statement could have been made about the nature of Gamora and Thanos’ relationship, or some sort of epic rivalry between the latter and Magus could have been retconned. Instead, the whole thing feels like a missed opportunity – and not just on the art side. Ariel Olivetti’s art has been pretty weak throughout – far below his abilities. But in this issue, he seems to have decided to just full-bore dial it in. Many of the pages look like they were quick sketches that rather than finish, he decided to hand over to the inking process for finishing instead. Only the inks aren’t all that great, either – thin and wispy, with no real weight to them. No real depth – all surface, just like this miniseries.

The latest Thanos series ends with a whimper rather than a bang, leaving readers to wonder what the point was of all this.