No One Escapes The Love Of Death. (Thanos #15 Thanos Wins Comic Review)

Before Thanos helps his future self win back the love of Death. Thanos surveys his future kingdom to learn of what he’s become. 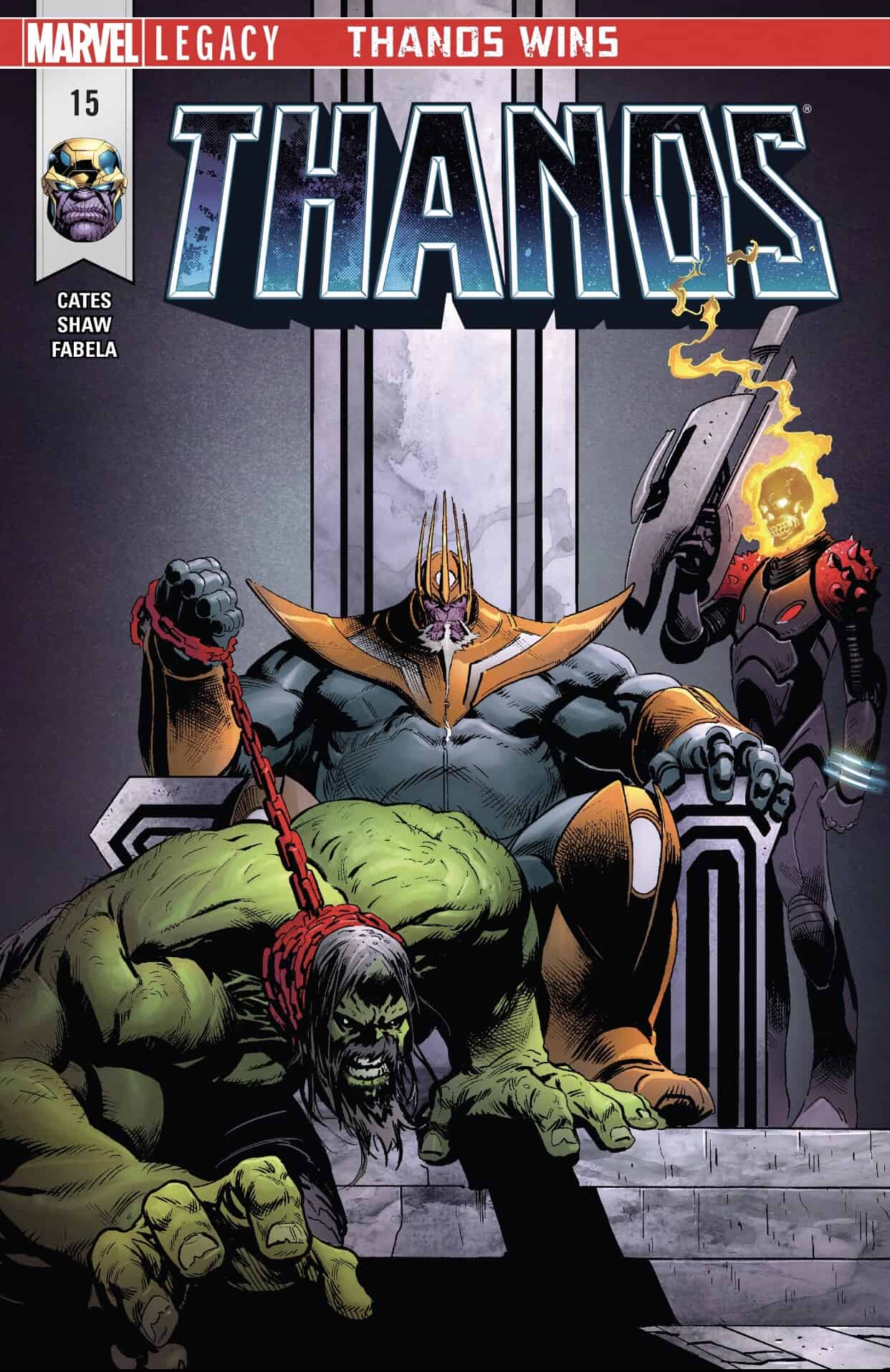 What You Need to Know: Thanos has won in the future and claimed the universe as his. One more thing must be achieved and that is to reclaim the love of his beloved Death. The future king has sent his cosmic Ghost Rider to the past and brought the younger Thanos to the future. Thanos has learned he will win but does that mean he likes what he sees? Who exactly is such a threat to the future Thanos that he needs his younger self to help? And who is this cosmic Ghost Rider? 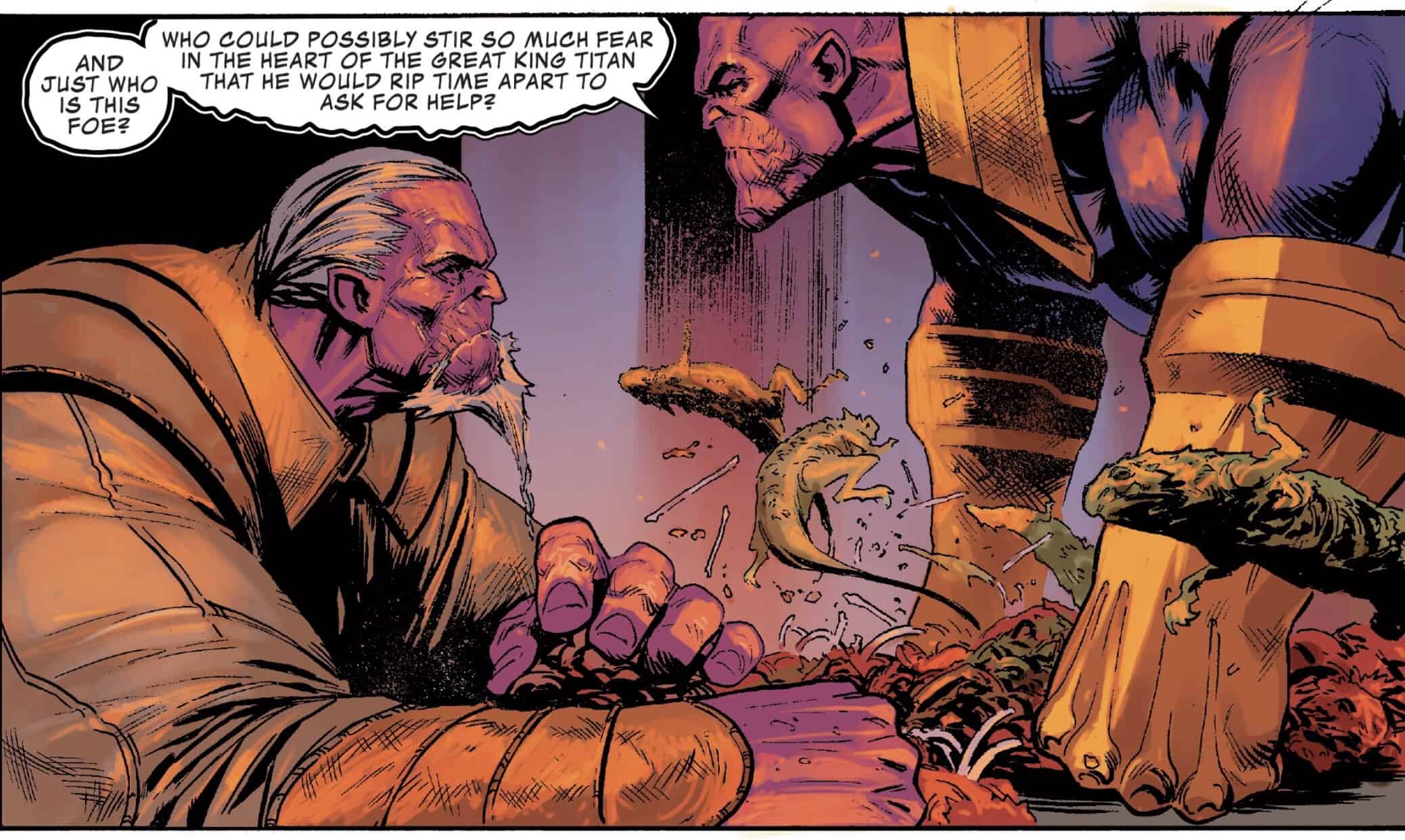 What You’ll Find Out: Thanos is looking at his life’s work through the penance stare of the cosmic Ghost Rider. The penance stare would drive anyone mad at the site of all the horror they have wrought. But not Thanos as those horrors are beautiful achievements to him. But while Thanos smiles at the destruction and death he has caused over the millennia. His opinion on his future self and what he sees around him is much different. Aggravated by the fact his future self is asking for help to fight “the Fallen One.” And that king Thanos has allowed himself to be a slave to Death’s love. The young Thanos isn’t satisfied by his triumphs of the future. Even learning of the fate of Steve Rogers and that the Hulk is his personal dog seems to unease him. Learning that Frank Castle is the cosmic Ghost Rider doesn’t impress Thanos either.

Future Thanos is getting impatient with his younger counterpart. He wants to end the Fallen One as send his younger self back to the past as soon as possible. The younger Thanos has no understanding of why the love of Death is so important to him. Or that the Fallen One is so much more than a “forgotten herald.” His younger self will learn soon enough as the Silver Surfer and his army approaches. 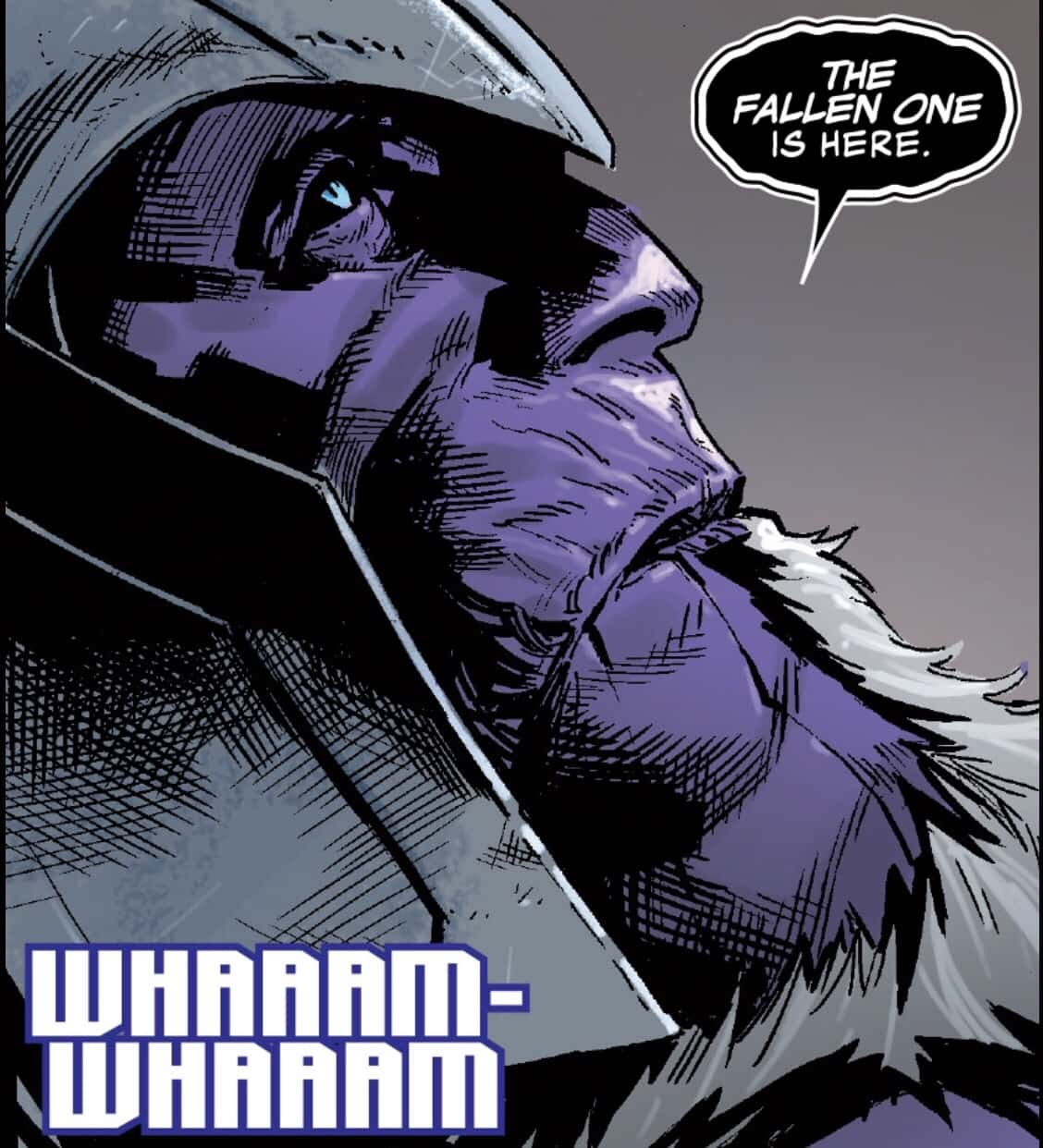 What Just Happened?
Thanos is a conqueror plain and simple. Perhaps not so simple when it seems conquering isn’t enough. Thanos has everything he ever wanted. A kingdom of death that he stands upon. But Donny Cates has done a brilliant job of writing here as he shows, it’s not about getting what you want. It’s about how you get what you want that’s more important. In the previous arc, Thanos declared he no longer wants or needs Death. And to be ripped into the future and find out that he’s just as hopelessly devoted to her as he once was. Illustrates that even Thanos can be appalled at his weakness to change his mind in such a way. It brings even more depth to Thanos’ character and that’s exactly what this series has been about since the start. Getting to know the mad titan beyond the destroyer he is. That there are things that mean more to Thanos than simply winning.

When an issue is all about character and talking. It’s not easy to bring about images that can dazzle or grab the readers eye. Shaw and Fabela make this effortless though. The facial expressions and body language Shaw illustrates are just beautiful. Even Thanos reaction to Steve Rodgers demise is telling. You can see the disappointing reaction and that’s the kind of great art that makes a comic book so much more as a medium. Fabela’s colors just kill, as the tone of the book never wavers from what it’s supposed to be. It’s dark and gorgeous and every page is amazing.

Rating: 9/10. Final Thoughts: When it comes to villains and what makes them great, Cates understands there has to be more than power and ambition. There has to be reasons and standards. While Thanos has always been a great villain, Cates is bringing out more to him and I can’t wait to see what’s in store. And while the writing is solid and the art is amazing. It’s still an issue of talking and none of the revelations, even Frank Castle as the Ghost Rider, is enough to make this book a “10.” Still, the intrigue and good storytelling is apparent and that’s what makes Thanos a great read.