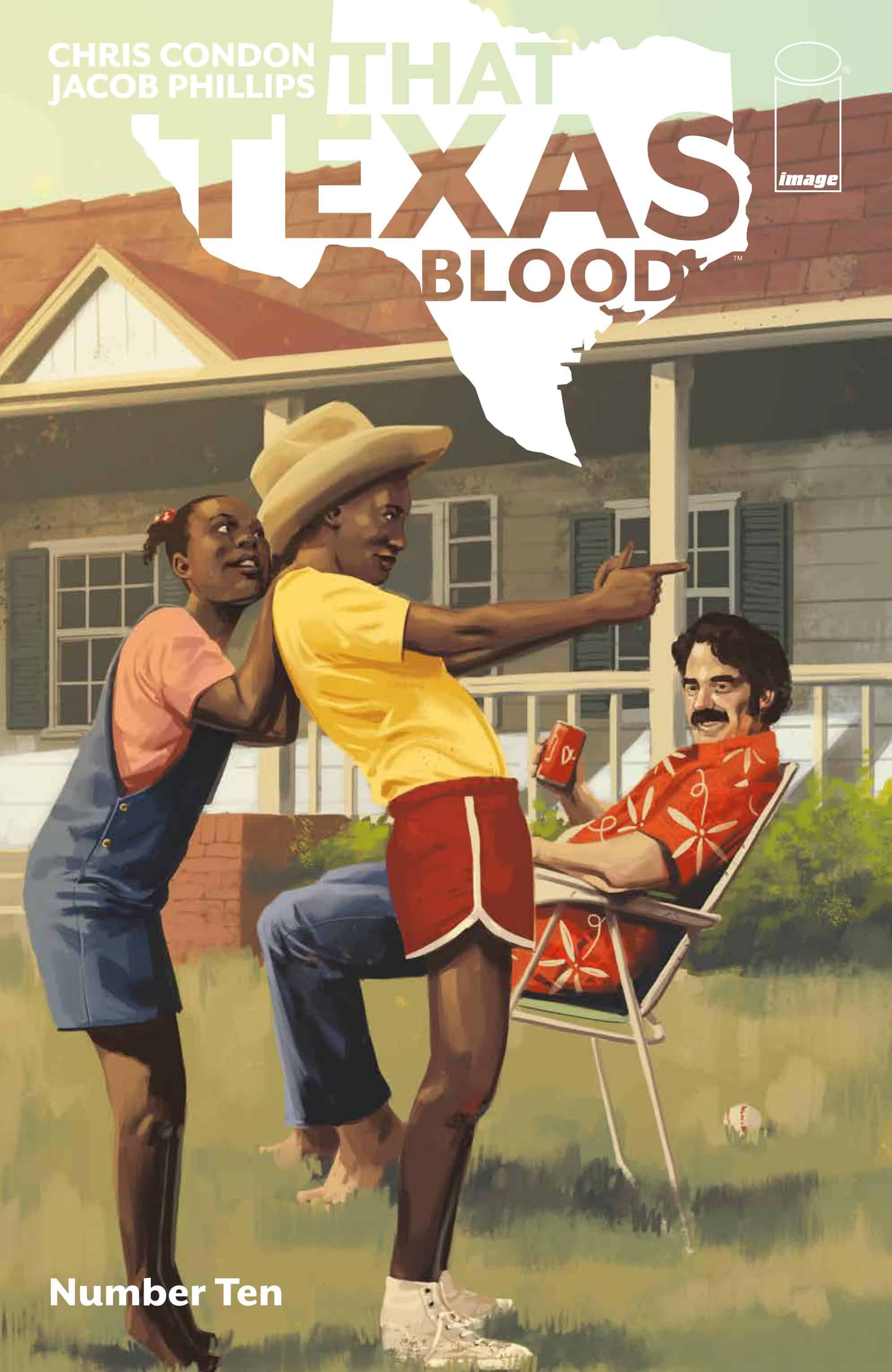 The ability to capture something universal, whether it be a theme, tone, or trope, and convert it to an audience is one of the greatest tricks a storyteller has up their sleeves. Chris Condon and Jacob Phillips both play this card masterfully in the tenth issue of That Texas Blood and manage to capture the reverberations from the death of innocence in a small town. It’s that sense of darkness tugging at the edge, ascending from the core of a black hole. In this case, that black hole is a musician and possible cult leader coming to town and bringing a dark god with them.

Condon’s script is tight and kinetic, bouncing from scene to scene at a brisk pace even with a narrative framework of telling the story at a greasy spoon diner. Every scene, ranging from kids playing in the yard to a conversation to a grieving mother, to Joe Bob and Eversaul raiding what might be an altar to a cult sacrifice, flows like a tense thriller, without feeling like a slog.

That universal theme of darkness is highlighted in the aptly named Bruce Springsteen album Darkness on the Edge of Town. It’s not a coincidence if the sounds of the album come to mind when reading this issue and arc of That Texas Blood. In the book’s back notes, Condon discusses the influence of the album and its almost inclusion on the book’s official Spotify playlist (which is worth a listen). The album was kept off the playlist due to Springsteen’s Jersey roots, but that geographic distance highlights the universality that Condon’s story is tapping into. For an album tracking darkness encroaching on a New Jersey small town to sync perfectly with a drama about a small Texas town losing its innocence, it’s a testament to Condon’s masterful scripting paired with Phillips-inspired art.

Phillips’ art remains untouched in this book, being one of the finest balancing arts of action, atmosphere, and emotion. There’s a page in this issue that transitions from children playing in their front yard to lying on a slab in the morgue. The composition is as simple as it comes, three horizontal panels equally filling thirds of the page, but the presentation of images creates a heart-wrenching and impactful scene playing out. It’s the type of transition one would expect to see in a feature film but in comic form is beautiful in its simplicity.

That simplicity echoes throughout the issue, from its opening page which follows kids playing on the lawn, the scene taking from what appears to be cave drawings to loose impressionist links to the refined linework established in the series. As a working colorist as well, Phillips’ colors mirror that shift and style and just leave its reader in awe in the minor manipulations.

It’s fair to say that when comic fans see an artist working in the indie sphere, they can’t help but imagine the big two books they may draw one day. In the case of Phillips, it almost feels dirty or shameful to imagine his style being confined to a monthly corporate comic. Phillips pitch-perfect lines, color, and design sing on an indie comic, and to fathom them appearing on a book from the big two just seems disappointing. Unless it’s something like a Black Label book, which thrives in an oversized and prestigious presentation, Phillips’ art would lose some of its uniqueness. (Though, gun to my head, I think this team would be an excellent follow-up to the Zdarsky/Checchetto Daredevil run.)

Condon and Phillips continue the streak of a perfect series with That Texas Blood #10, which sees the creators working in harmony to create the sense of evil seeping into the fabric of a small town. It’s a trope that has been used a thousand times before, but the team mines drama and atmosphere from the simplicity of the story. The darkness that’s creeping in feels volatile, and after the almost rhythmic pace of this issue, it’ll be fascinating to see where the book goes next.