That Texas Blood #11: Moments Frozen in Time, Like Fear in the Rain 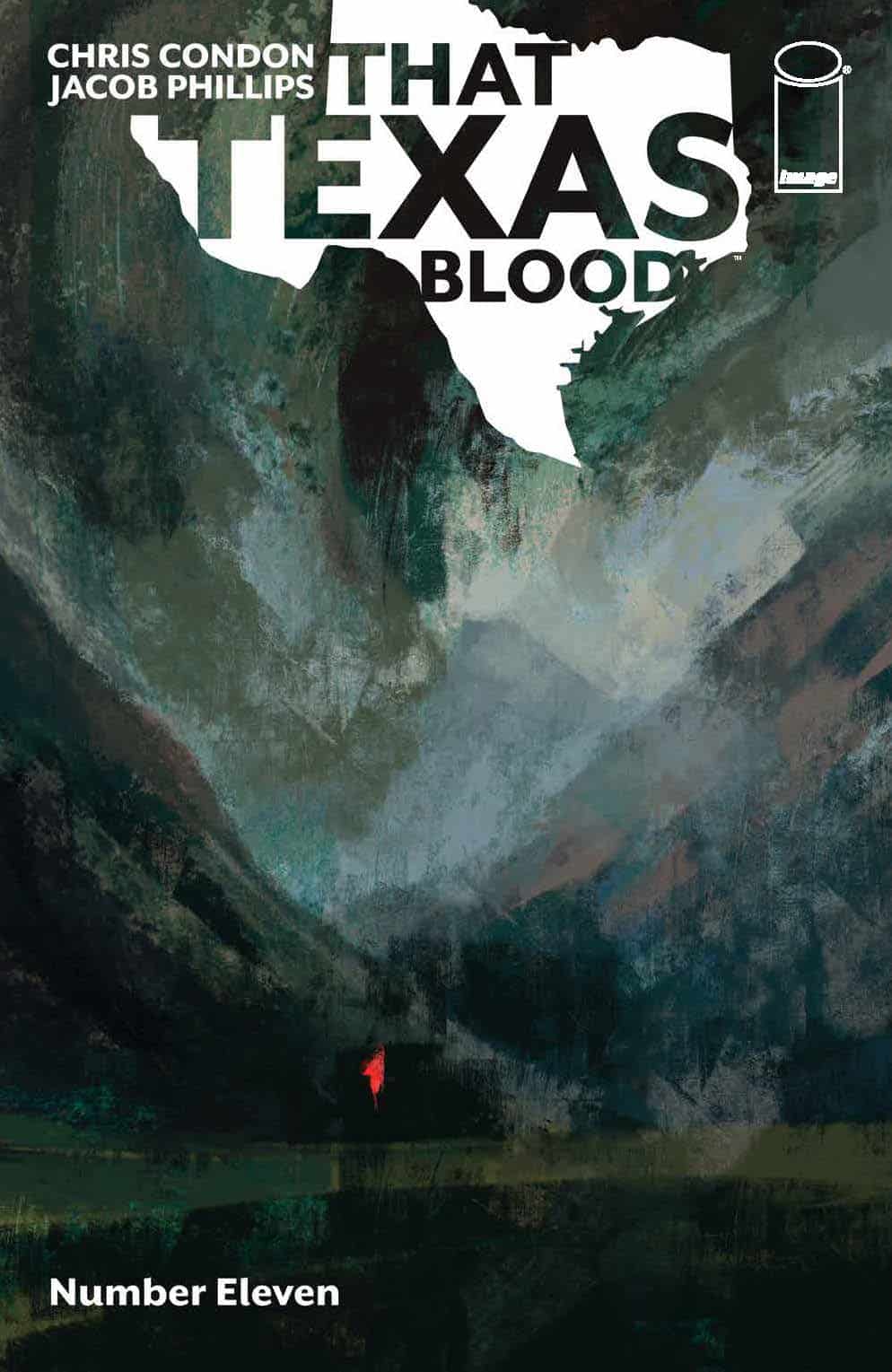 A freak thunderstorm descends on West Texas as Joe Bob and Eversaul confront the Cult of Night.

Atmosphere is everything in comics. It takes a deft hand, both in crafting the words on-page, and the images and colors catching the eye to establish a sense of the world, the plot, and the tone. Sometimes issues feel like a stock book in the publishing line or company they’re from, while others manage to create a visual language to call their own. A standout book, or series, can take those elements and craft something that resonates so deeply in its readers’ bones.

Chris Condon and Jacob Phillips’ That Texas Blood #11 is the type of book that can create a suffocating atmosphere, from cover to cover twists a knife of dread and tension into the gut. Phillips’ colors are the most powerful tool in this issue, with inky blacks blended with blues and greys to create a literal overcast on the events of the book. The most visually stunning sequence of the book is a scene of Joe Bob outside the mansion where possible cult sacrifices are occurring, trapped in the rain of his squad car. The rendering of a West Texas storm is breathtaking, the art and coloring just imbue the sense of bone-drenching rain seeping into your clothes into its dry pages. Something as simple as the detail of the dark skies contrasted against the beating rain is a little point that is almost impossible to portray in a static medium, but Phillips can render it without fail.

Condon’s script is as tight and perfectly paced as possible, especially as the larger arc is a flashback telling the story of these cult kills. Framed stories are always hard to nail the pacing of the plot, but Condon never lingers too long in the present, using it in key places to add some levity when the book slides too far into harrowing rituals or cheeky Harrison Ford action flicks. Condon has also inhibited the world of the book, and characters like Joe Bob and Eversaul feel imperfect but well-rounded. It’s impossible to read Joe Bob’s slow draw in anything except in the voice of Sam Elliot. It’s the most difficult process a writer can conceive in terms of crafting the world and characters, to fully realize a person that can leap off the page from the very beginning, and constantly create more and more characters that continue to make that leap.

The second sequence that shatters the expectations of the book is when Joe Bob and Eversaul make their move on the ritual taking place, and Condon gives simple action beats that shift from Joe Bob taking control of the scene to immediately being tossed on his ass. Phillips art presents the scene less like a cool action movie, and more in the sense of a real standoff. It’s clumsy and more than a little messy. Emotion and atmosphere continue to break through even in this racing scene, letting the dread and danger of the cult chip away at Joe Bob’s determination and courage. It’s a scene that crawls under the skin and makes the reader invested enough in the story that the knowledge of Joe Bob living and telling the story is irrelevant.

That Texas Blood is a book that every comic fan, no matter of genre test or sensibilities should be reading. It’s a compelling piece of fiction, a testament to both the craft of writing, drawing, and coloring and a deeply unsettling look at the nature of evil in the world. Plus, a little good ol’ fashion crime drama and atmospheric West Texas never hurts the book’s cause.

That Texas Blood #11: Moments Frozen in Time, Like Fear in the Rain