That Texas Blood #15: Sheriff in a Snowstorm 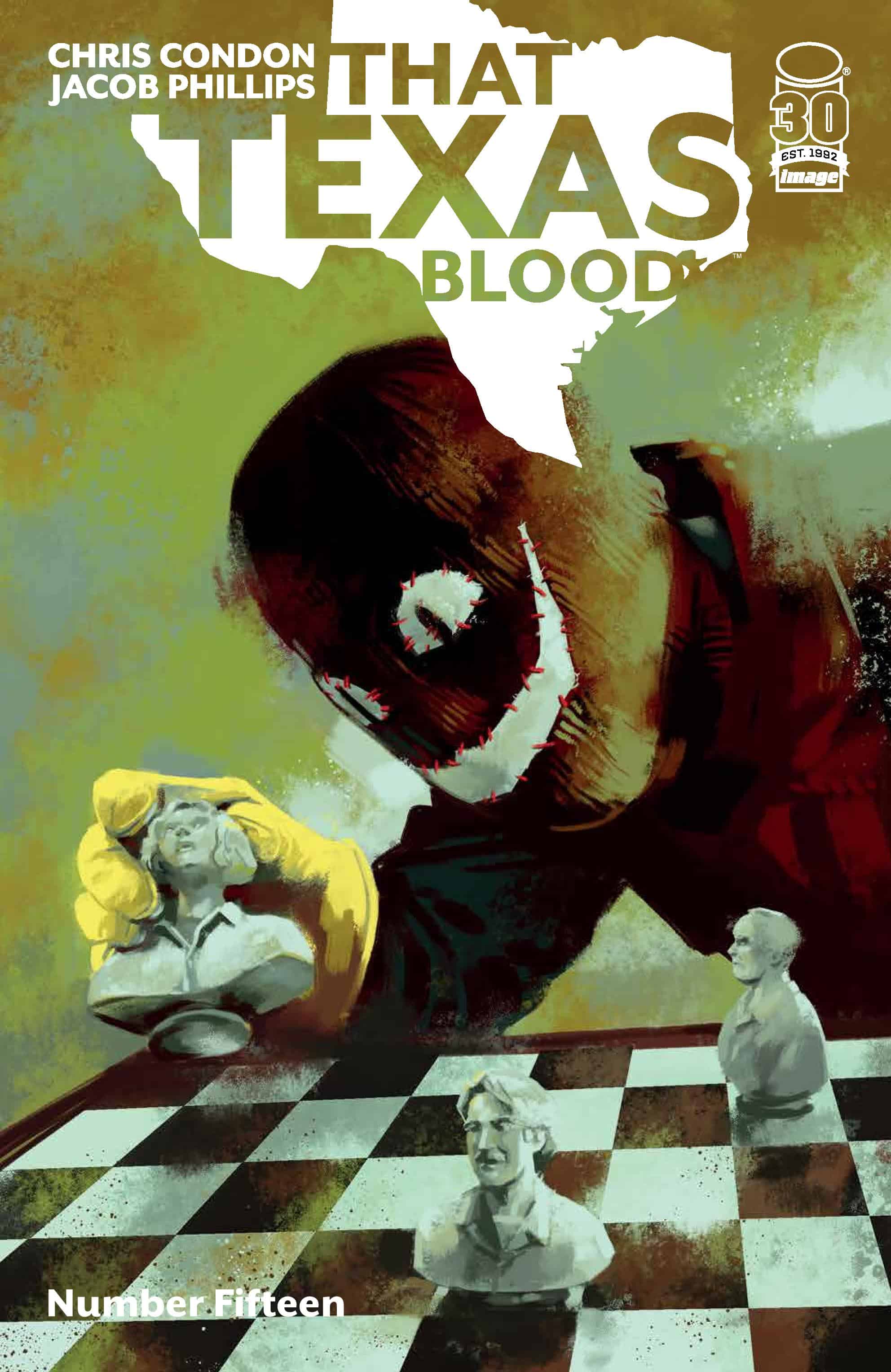 Snow and horror go together like rain and crime fiction. Two elements that feel dissimilar, but when put into dialogue with one another, create an alchemy of rich symbolism and thematic relevance. There’s something powerful in the image of blood staining a bed of snow, working as a symbolic representation of a loss of innocence. With horror, which commonly tackles that theme of loss of innocence or the corruption of the pure, it’s an easy but visually stunning way to get those notions across. It’s also a powerful cinematic image in horror specifically, one of the cases where showing the image has more power than leaving the concept to the viewer’s imagination. That visual combination is the latest choice that That Texas Blood #15 employs in its current arc, leaning heavily into the horror and slasher realm of crime fiction. Written by Chris Condon, with art and colors from Jacob Phillips, who’s joined once again by Pip Martin for additional color assistance, the issue blankets Ambrose County in a fresh layer of snow and ice as a serial killer leaves their mark on the community.

Condon’s script is built around the emotional fallout of the last issue’s murder, using the horrendous act to create a scaffolding for the dramatic tension of the issue. Not only is RQK (the Red Queen Killer) still on the loose, but the snowstorm is still building to be even more dangerous. Meanwhile, Joe Bob also has to call for backup, which will be delayed due to the storms, but Condon underscores that Joe Bob plans to catch the killer before the DPS can step foot in Ambrose County. Condon’s script does an excellent job of tying in thematic and emotional beats from previous issues, across multiple decades, through the conflict of revealing information.

Joe Bob’s first instinct is to keep the RQK murder close to his chest, wanting to protect the people of his town. But it’s clear that not revealing that info could incite more panic if word gets out, and throwing agitated Texans into a snowstorm would not be the best of ideas. Condon threads that needle and immediately pays off the doubts of Joe Bob’s fellow officers and sets up a strong status quo for the investigation going forward. The choice signals a shift in Joe Bob, one that Condon expertly telegraphs throughout the first two arcs, in which Joe Bob is going to have to trust the public, and his county at large against this believed to be an outsider.

Condon expertly constructs scenes for Phillips to give plenty of wide angles showing people breaking down. The creative tit-for-tat between writer and artist has only improved throughout this series and every issue gives another window into that stunning partnership. In the issue, Condon lets Phillips’s art speak for itself in many of the most emotional scenes in the book, and knows not to mar those panels with an excess of words or narrations. For two pages, Phillips’s art guides the narrative and emotional throughline, effectively revealing everything the audience needs to know, and what to feel without any text.

Watching Joe Bob comfort a man who’s just lost his daughter, as the snow builds and consumes the world around them is such good detail and is perfectly executed in the flow of the issue. There’s something extra heartbreaking in the main sequence, watching a man break down in the shadow of a big T-Rex overhead. It’s a visceral detail that encapsulates those moments of heartbreak, where the little things or the most absurd are the ones that stick in wake of a tragedy.

This issue ratchets up the, for the lack of a better term, cinematic aspects of the book. It’s in the way Phillips renders scenes and landscapes, with plenty of shots that have a wistful longing behind them, threatening to be swallowed by the falling snow. The best way to describe the art and coloring direction of the issue would be vast and empty with an undercurrent of foreboding. Phillips presents the snow and white on the page as an endless abyss of innocence just waiting to be stained by the acts of RQK. Those cooler tones permeate every inch of Ambrose, from the murder scene to the sheriff’s station to the roadside gas station with the dinosaur adjoining it.

The only respite from that palette is when Joe Bob goes to the local radio station, to make his announcement about the RQK. The station has a warm, orange glow to it, giving a sense of warmth and heat that seems to be lacking in the rest of the county. It’s a strong choice to indicate the righteous choice Joe Bob is making to share the details about RQK with the town, and there is a certain shift that comes with opening up and sharing the truth. It’s a speck of color shining through that endless abyss of ice and darkness, an offering of hope against the carnage that is sure to come in the coming issues.

With That Texas Blood #15, Condon and Phillips (along with Martin’s touches to the coloring) bring a rich new layer of symbolism and textuality to the concept of blood in the snow. The use of the visual motif is a great encapsulation of what this book does best, which is to riff on established tropes and themes in neo-noir and neo-western stories, and through stunning art and writing, elevate them to something new and unique. It’s a book that also doesn’t forget the ongoing story even as it shifts across Joe Bob’s life, and gives enough for both new readers and those who have been along for the ride since issue #1.

That Texas Blood #15: Sheriff in a Snowstorm