That Texas Blood #16: Thrills and Chills 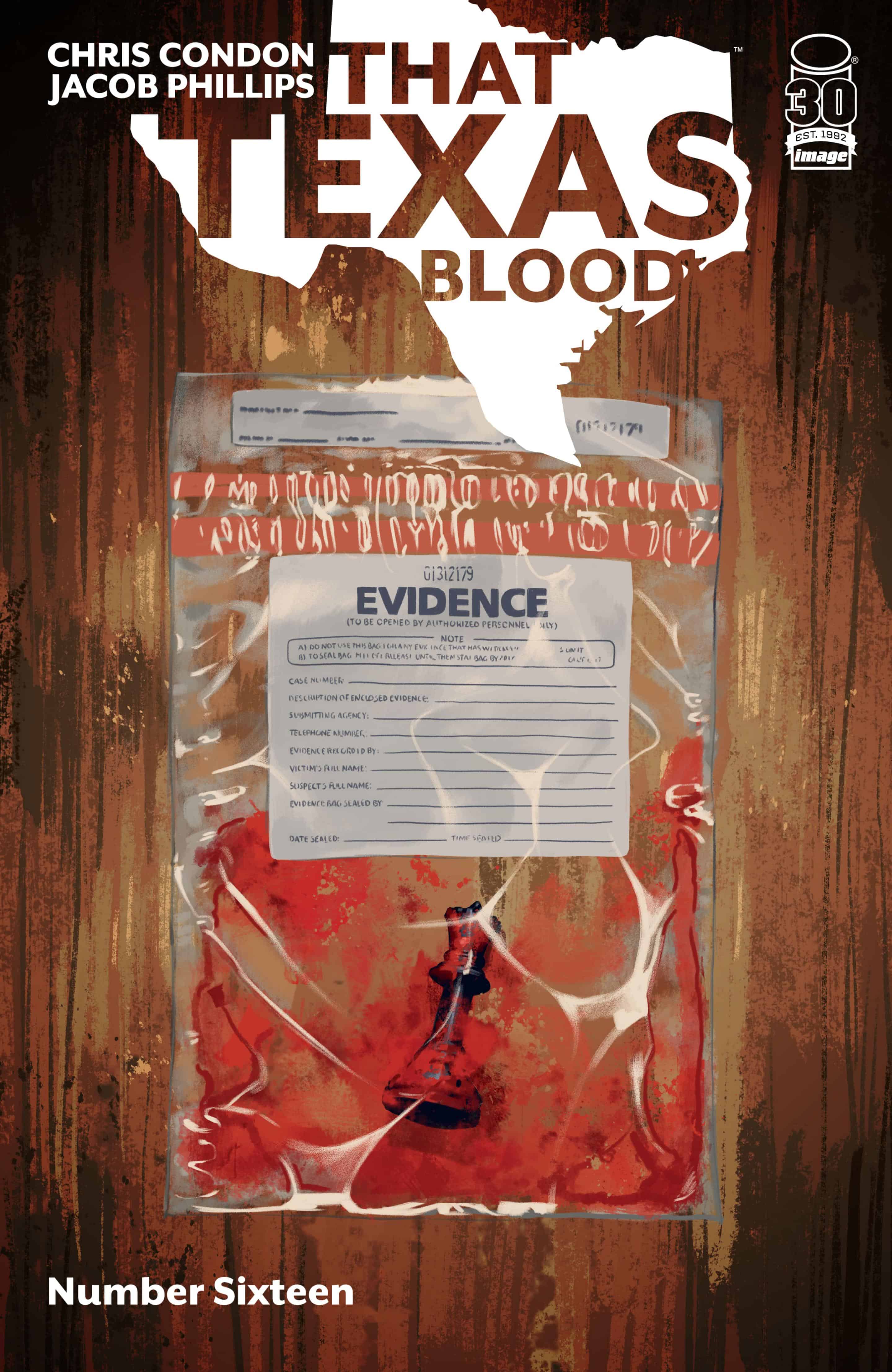 “THE SNOW FALLS ENDLESSLY IN WONDERLAND,” Part Three: With questions about the murder swirling, the sheriff’s office discovers a seemingly abandoned vehicle that may be a link to the RQK serial killer.

Pacing is a powerful tool that storytellers can employ to evoke a specific emotional response in the audience. In the film, a lingering shot that uses subtle movement and sound can create a sense of dread or terror that drives the audience into a jump scare. With many of those technical elements missing in comics, specifically camera movement and sound, it becomes a challenge to convey that tension without pages reading as repetitive or derivative. When a sequential layout can convey that lingering sense of dread, it becomes clear the writer and artists have a clear sense of what makes a tense scene and leans into what makes a story or scene get under a reader’s skin. A book like That Texas Blood excels in those moments, and with its most recent issue, really turns the tension knob to 11.

Issue #18 – written by Chris Condon, with art, colors, and letters by Jacob Phillips, and additional coloring by color assistant Pip Martin – deals with the immediate fallout of Joe Bob’s decision to inform the town about RQK. It opens with Lu taking calls from people in town about the issue before jumping to Joe Bob investigating a truck sitting on the side of the road. From there, Joe Bob has to try and deal with Benchley’s rally, which sets the stage for Joe Bob to finally explode against the douchey behavior of his competition. The back and forth between Joe Bob and Benchley is cathartic, giving Joe Bob the chance to deal with the emotional baggage he’s been carrying since the last arc. In this current arc that focuses on the sparse, tense atmosphere, this moment feels like a natural burst of pressure that Joe Bob is living with. After he says his piece, Joe Bob returns to the station and comforts Lu, overwhelmed by the calls and information about the RQK.

The scene is a breath of air after the explosive conflict at the rally and shows both sides of Joe Bob, the righteous and the gentler. It’s an excellent scripting decision that maintains the momentum of the issue by giving a natural flow from high to low energy. Condon knows when to cut from sequence to sequence, not letting any moment last too long. It can be a struggle for lingering sequences to feel interesting or important, but the script – and Phillips’s stunning art and colors – makes the case for these moments. The balance and rhythm of this issue are in perfect step with the arc, Condon’s willingness to work in the slasher sub-genre is paying off, and the individual sequences work on a dramatic level that feels perfectly in sync with the larger story unfolding.

Condon’s script is full of these excellent moments, but the standout is the scene where Joe Bob almost comes face to face with RQK at a stopped 18-wheeler. The entire scene is a few pages long, but the last page in the sequence is the most compelling, utilizing that tension and terror. This is a great representation of what the arc is working to, contrasting those stark white backdrops with the shadowy blacks of the mask. Condon and Phillips ride that tension through the use of lingering shots of RQK’s mask. It’s deeply unsettling every time the image appears on the panel, the face a twisted smiling face that haunts not only Joe Bob and Lu but the audience as well.

Phillips’s use of white and snow gives the book a claustrophobic feeling even as it takes place on long stretches of highway. This lets the book veer into Fargo/The Thing territory, thanks to the sparse snow, landscapes, and growing tensions. The sequence of the lingering truck is a perfect example of Phillip’s ability to capture that tension that makes reading an issue of the series thrilling. The panel composition and flow are very simplistic in terms of four long panels that go from a wide shot and then zoom in until it becomes a close-up of the mask coming out of the trailer’s shadows. But in that simplicity, the atmosphere and tone come across without hindrance, and the choice to avoid caption boxes or dialogue allows the art and color to speak for themselves. Just seeing the falling snow as the only interruption to the black of RQK’s mask chills down to the spine and proves that Phillips can do more than just the gritty crime stories he and his father are known for.

That Texas Blood #16 is another perfect installment in an already perfect series, elevating the level of craftsmanship in both the script, art, and coloring as it burrows deeper into the conventions of slasher stories. Condon and Phillips have thrived thanks to the shift from gritty crime thriller to slasher/survival story, playing with the rhythm and flow of the book to ratchet the tension and atmosphere of Ambrose County. The white snow works as an oppressive force, blanketing the county and trapping the inhabitants as RQK quietly lurks and plans to strike his next victim. This issue delivers on plenty of explosive dialogue and rising tensions, channeling the best of paranoia and pressure to deliver a compelling chase and missed meetings between Joe Bob and the RQK. It’s not too late to catch up with this arc, and not doing so is to do a disservice to one of the best comics on the stands, period.

That Texas Blood #16: Thrills and Chills