That Texas Blood #18: Not the Frozen Peas! 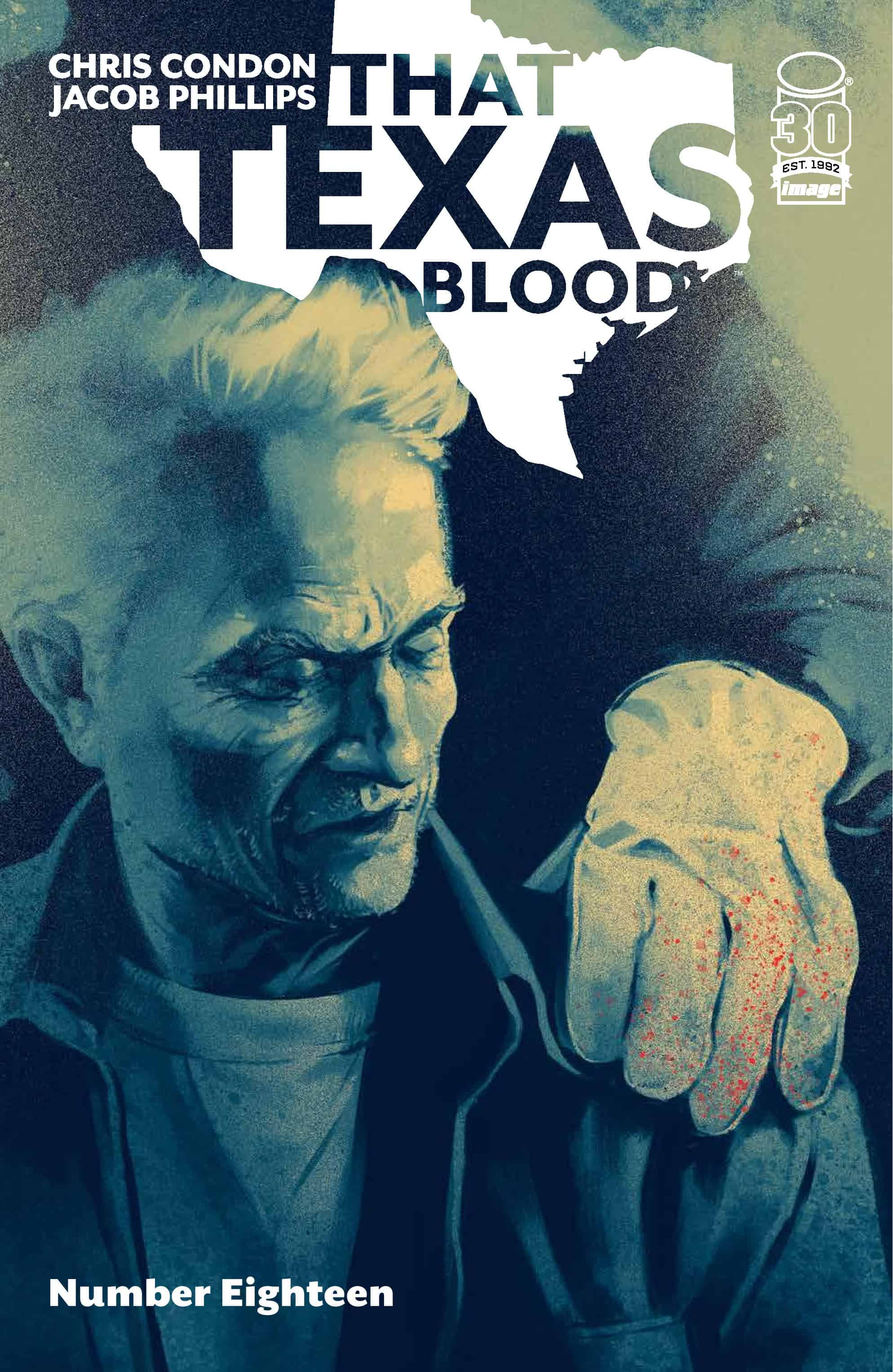 As Joe Bob and Wilson desperately search for the RQK, the killer makes his next deadly move.

In discussions of writing and stories in general, there’s a notion that a good storyteller can make the setting feel like a character of its own. This is usually a sentiment aimed at giving a setting depth and detail, to make it feel like an essential part of the work being crafted. A country, city, neighborhood, apartment, etc shouldn’t feel interchangeable or one dimension in the same way characters shouldn’t seem like cardboard cutouts. This in many cases can lead to an over-correction by creators, trying to create hyperrealistic interpretations that provide a verisimilitude that doesn’t work to service the plot, themes, or atmosphere of a piece. In reality, what makes a successful interpretation of that idea is when the setting feels real and lived in while reflecting something vital about a work. It could be the collective moral or spiritual core of a character or community, a commentary on the genre conventions of the work, or even an engine that powers comedy throughout the story.

That Texas Blood #18 – written by Chris Condon, with art, colors, and lettering by Jacob Phillips, and coloring assistance from Pip Martin – serves as the penultimate issue of the ‘The Snow Falls Endlessly in Wonderland’ arc. It picks right up from the cliffhanger of Lu returning home with Red in tow, where the Red Queen Killer has also made himself at home with a beer and sandwich. As Lu and Red warm up and prepare for a nice, home-cooked meal of chicken fried steak, RQK strikes, killing Red in one swoop. Lu notices something is wrong and goes on the defense. She seemingly kills the RQK with Chekov’s mystery paperweight. But in Ambrose, nothing is certain as the issue ends with a nasty wreck as Joe Bob speeds his way to the scene of the crime, having figured out a connection between the abandoned truck and RQK.

Condon’s script starts to connect the various plotlines of the arc, setting Lu, Joe Bob, and the RQK onto a collision course. This issue uses that momentum to put the slash in slasher, switching from lingering, atmospheric horror to a tense confrontation filled with bloody carnage. Condon keeps RQK as a monster beyond petty reasoning or monologuing about his plans while he kills. There’s no celebratory speech or passionate flare in the murderer RQK commits, instead opting for a slow, methodical stabbing to end a life. Condon’s decision to spare RQK from dialogue, only letting out an SFX here and there, prolongs the mysteries and motives of the killer. This is an excellent bit of plotting as it ensures that the next issue, which will be the finale of the arc, maintains additional tension as Joe Bob reaches the scene of the crime.

The back matter for this issue works in tandem to reinforce that characterization of RQK, detailing an early attempted murder by the serial killer. According to the article, this was done without the infamous mask RQK wears, but the killer matched the description of breaking in and enjoying a cold drink and some food in the fridge, before attempting to kill a housewife as he prepared dinner. Again, RQK didn’t talk or monologue to his victim, but his silence was more than enough to inflict psychological harm and a burden to both the woman and her husband, who felt violated by the killer’s presence in the home. It’s an excellent use of supplemental material that ties into the larger theme of the arc, as well as the series’s examination of the pervasive and infectious nature of evil. Including these backup materials in each issue does a masterful job of fleshing out the setting of both Ambrose County, and the world surrounding it.

As a native Texan, the best moment of this issue hands down is calling a popular dish by its correct name. Lu offers to cook a chicken fried steak, and not a country fried one, which is a detail that makes this issue an automatic 10. In reality, Condon peppers it in as a little detail, but these bits give a texture and dimension to the series. It’s not the neo-noir stories, beautifully rendered mustaches, or eye-catching colors that make this book special, but it’s Condon and Phillips’s ability to infuse those little details to crack open this microcosm of a county, and make it feel real and lived in on the page, that makes That Texas Blood so compelling issue after issue.

Phillips contributes just as heavily to that sense of texture to the world thanks to both his art and coloring, working in fabrics, backgrounds, and weather to give the effect of living in space. Lu’s house, which is the primary setting for this issue, feels real and concrete, due to the use of simple, painterly backgrounds that evoke the look of textured drywall and sheetrock. Paired with the worn but homely decor, and warmth that radiates from Lu herself, the home resembles many of the ones that I’ve visited to see family members out in West Texas. It’s a sharp contrast to the scenes outside, the harsh whites and blues of the massive storm sucking any warmth and detail beyond the occasional car or body.

Phillips also builds from the differences in settings, and the inherent violation of RQK comes not only in the fact that he’s killed in Lu’s home, but that he’s partaken of that warmth and comfort. The panel composition shifts once RQK reappears as Lu showers and Red enjoys his beer. The layouts shift from the typical five-six panel layouts to four vertical panels as the RQK stalks up to his prey, then switches to another four-panel page that gives the largest amount of real estate to the act of violence. It’s a visceral, powerful image that is both expected and shocking, the red breaking up the warm yellows and cream of the home’s backgrounds. Later on, there’s a moment where the green of frozen peas and beans clash against the neutral browns of the floor, following the wreckage of RQK’s carnage, and it’s a moment reflective of the ruin cause by the murder. Something sacred has been broken, the ingredients to a home cooked meal scattered and shattered across the floor.

As RQK stands above his victim, the mask showcasing the perse grin stitched into place, the backdrop takes a blue-green mixed with black that gives the effect of an aurora. There’s no beauty in the action of the panel, but the horror clashes with the shade of blue used. That contrast once again highlights the little details on the page, like the individual stitches on the mask, the seams of RQK’s gloves, and the lines and shock of Red’s face. It’s a stunning way to take the simple linework Phillip employs and build into it a depth and texture that begs to be looked over again and again.

That Texas Blood #18 is a comic that understands the idea of setting, using both the larger Ambrose County, in particular Lu’s home in this issue, to showcase how violence and murder violate a community. There’s a crossing of implicit thresholds that leads to a dark outcome, and once it occurs in the interior, it can find its way into the open. Between Condon’s detail-rich dialogue and scripting, working in tandem with Phillips’s gorgeous linework and striking colors, both creators understand how to use specifics to enrich the story. A throwaway line like chicken fried steaks for dinner does a lot to make this world feel real and heightens the emotion and horror to a new level. As this arc comes to a close, let this review be a periodic reminder that if you aren’t reading this book, then stop everything and pick it up now. It makes for a perfect fall read, as the season changes and horror sits on the mind.

That Texas Blood #18: Not the Frozen Peas!