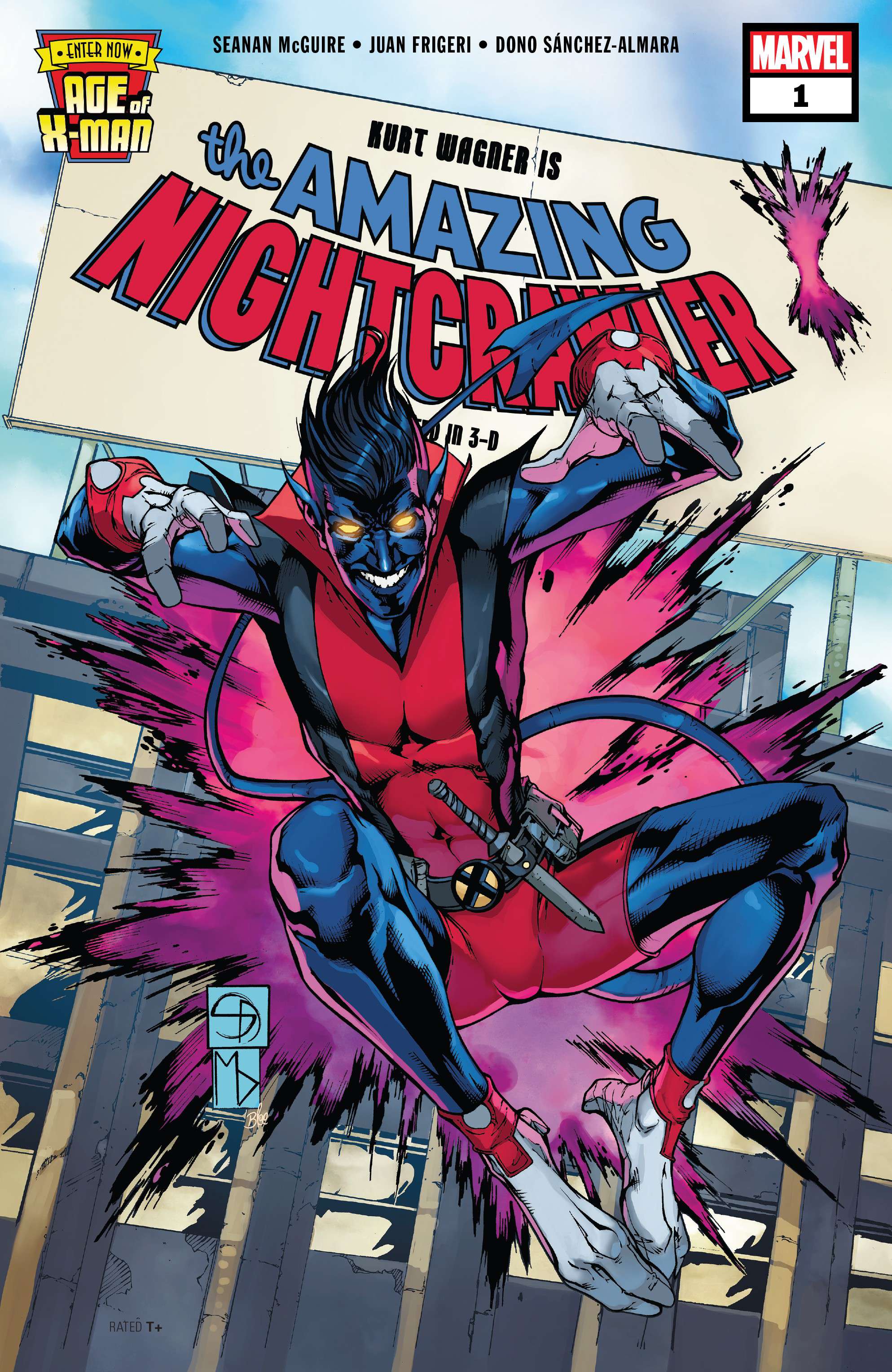 Kurt Wagner is the most famous mutant on the planet. He is adored by billions, dedicated to the twin masters of publicity and preservation of the peace. He has everything he ever wanted - in any reality. So why does he feel like something is missing?

Look. I am going to level with you. I have been looking forward to the first issue of The Amazing Nightcrawler with an equal mixture of joy and apprehension. Kurt Wagner has been my all-time favorite fictional character since I was twelve years old. I have Alan Davis’ take on the character tattooed on my fencing-arm, for God’s sake. But the track record for his solo outings has…not been great. Nightcrawler is a complex character and few writers seem to be able to resist the urge to streamline him down to one aspect of his personality, leaning into one archetype (pirate, priest, clown, devilish charmer) to the detriment of the whole. So, yeah, I was nervous about what we were going to get in this book. Luckily, the series is being written by Seanan McGuire and she’s got the chops to spin these disparate threads into something pretty wonderful. 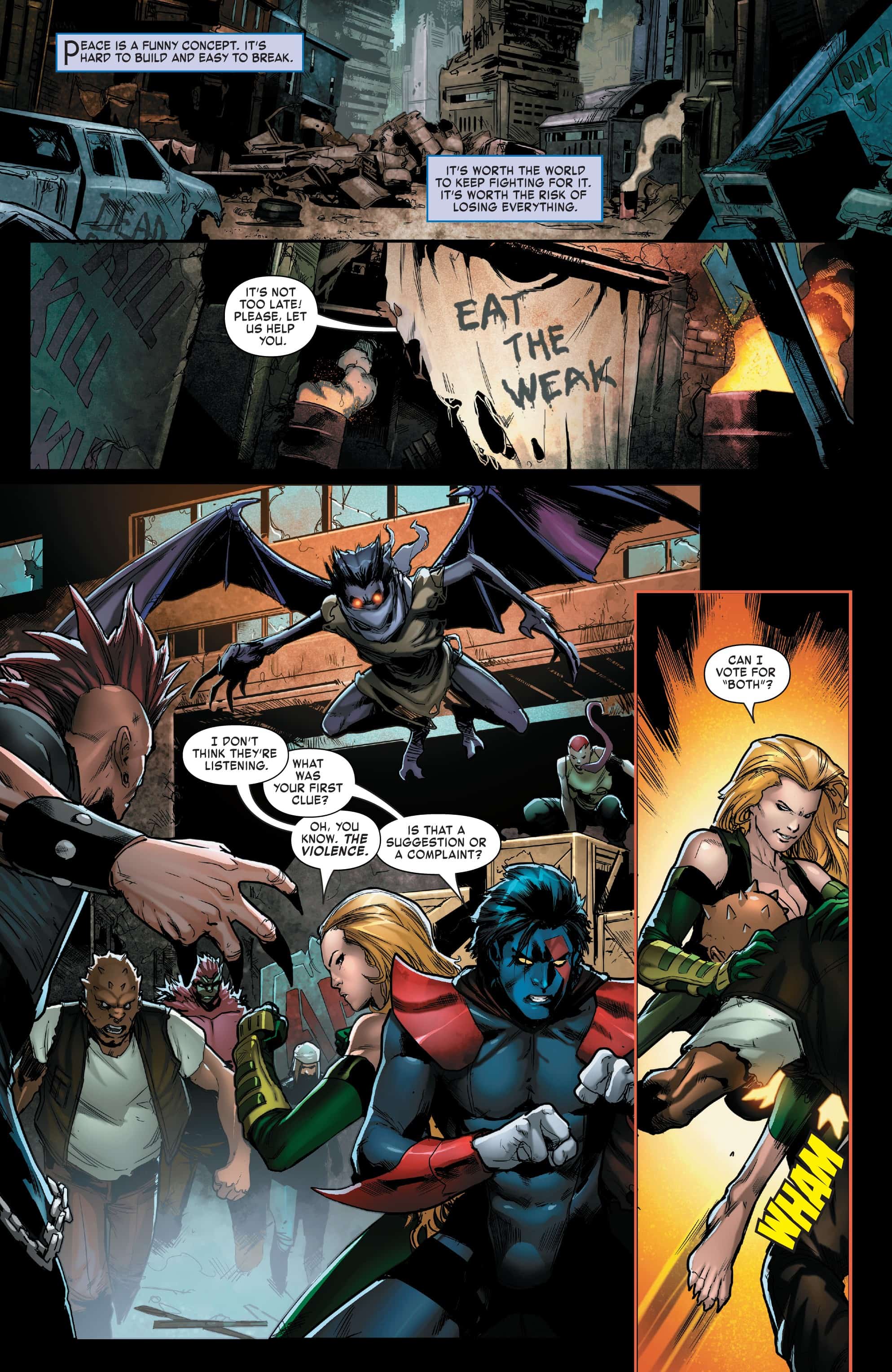 So we have a Kurt who has been handed the contents of his secret dreams. He is an actor whose work is prized precisely because of the same features that isolated him as a young man. He has a great many friends who love him deeply. He is bringing joy to millions, but it’s still vitally important for his sense of self that he eases the pain of one little girl who feels left out. In a world without religion, Nightcrawler remains a compassionate idealist, dedicated to easing the pain of the world. And this fact is made all the more tragic when you consider the misery he is inadvertently contributing to.

The shadow side of this immense change of fortune is less immediately obvious. The act of balancing his work with the X-Men and his career as a propagandist (however true-believing) is wearing him thin. He’s slipping in his training. He’s slipping in his self-control. This version of Nightcrawler is riding for a fall. And, as the cliche states, those who fly highest fall hardest. 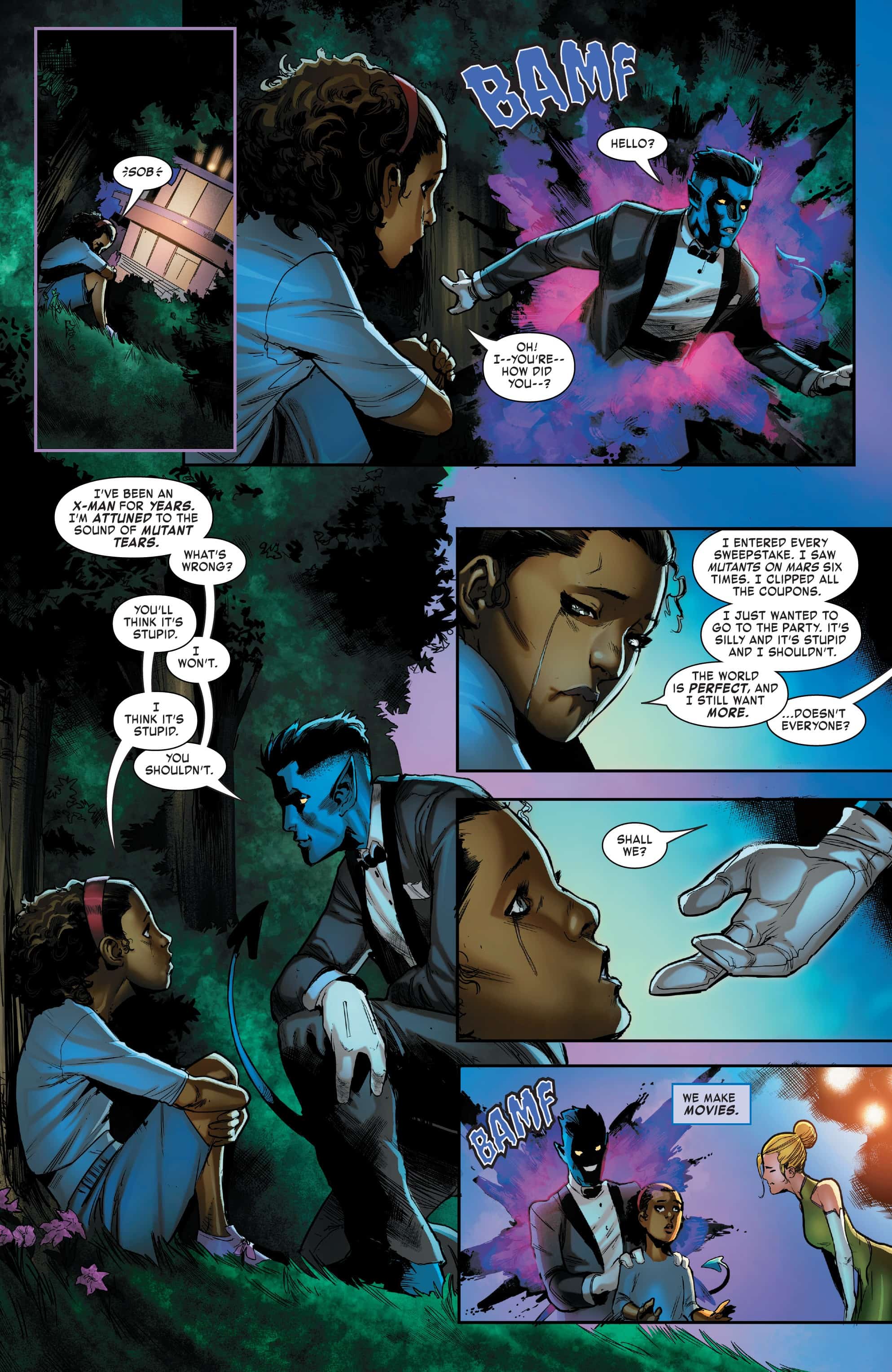 Since this is part of the world of Age of X-Man, each piece of world-building is important. I cannot emphasize enough how well this event has been planned. Every book in the series has been constructed in such a way that the utopic and dystopic elements are consistent in each. This is a world in which all varieties of emotional and physical intimacy have been forbidden. No one is allowed to pair off into couples or maintain any sort of familial bond. This issue highlights exactly how impossible a standard that is. In a prescient scene (which effectively parallels the treatment of LGBTQ people in fundamentalist cultures) the two surviving Cuckoos are persecuted for ‘flaunting’ their ‘disgusting’ relationship when the nature of their mutation makes it impossible for them to renounce their love. They cannot stop loving one another because their love is inextricable from their physical nature. And there’s another layer of darkness, here. Esme, the third sister, appears to be dead, since she appears in a photo and criminals are simply totally erased. 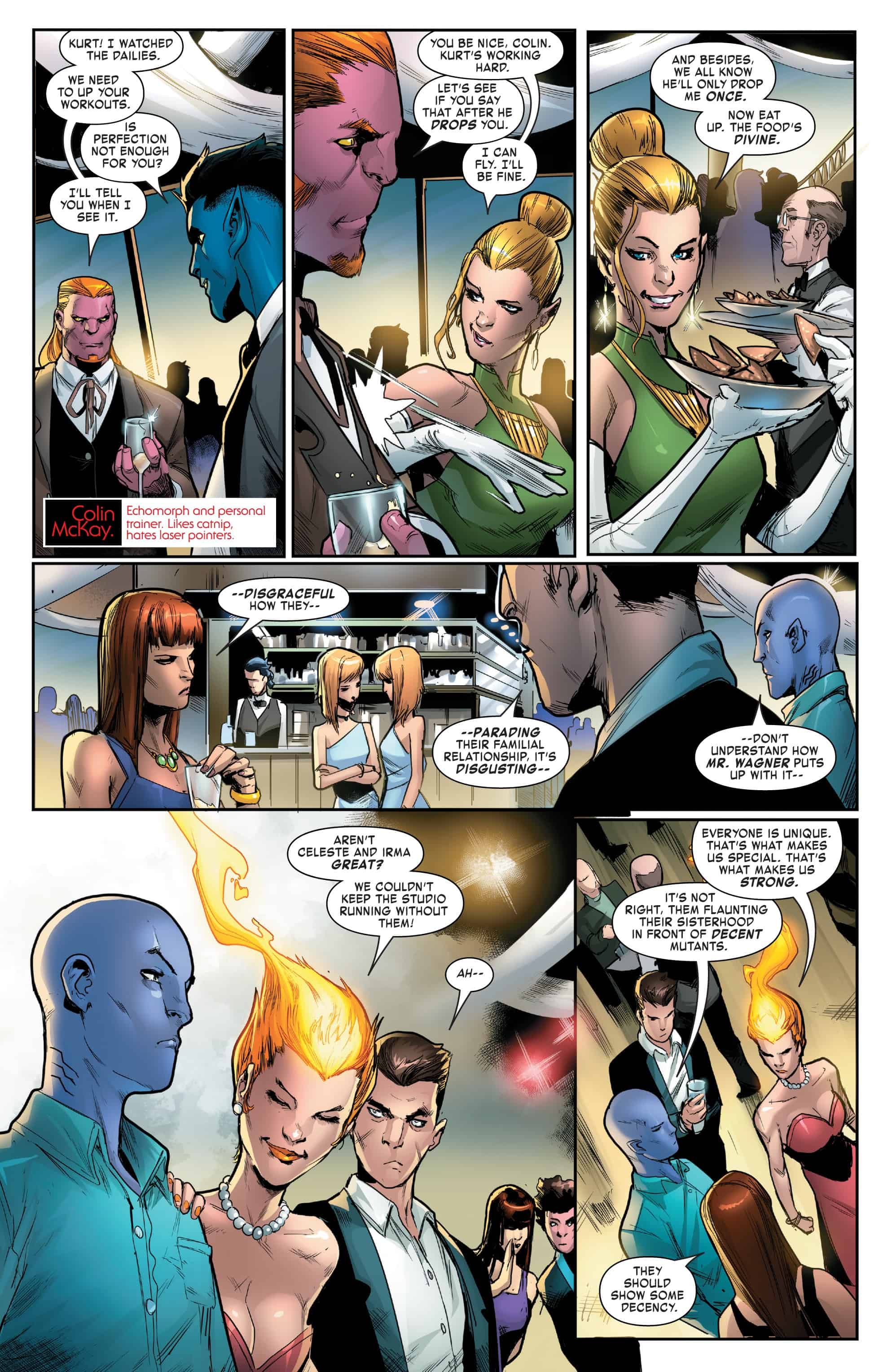 It’s telling that the cuckoos (and, now, Kurt and Megan) are complicit in maintaining the system which persecutes them.

Nightcrawler believes himself to be a superhero and film star. He isn’t. The X-Men, in this world, function as a smoke screen for a totalitarian government. He and Megan are not making films. They are churning out explosive, rollicking propaganda at such a furious pace that no one has the time to stop and analyse the contents. 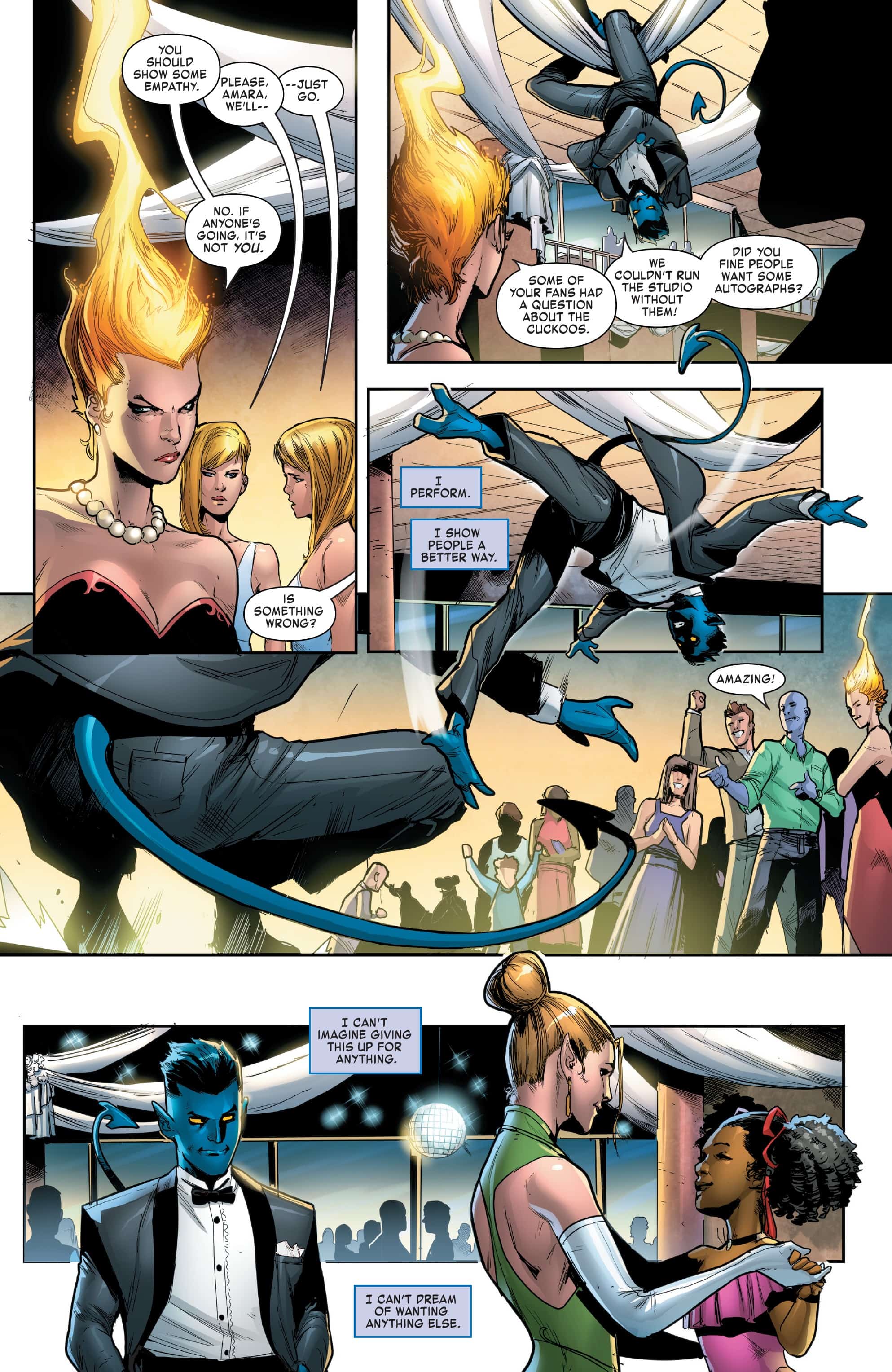 Sometimes, incredibly serious things pass by under the cover of frivolity.

And, oh, by the way. There’s a secret sex club coming up in the next couple of issues.

The art in this book was less satisfying than in the other AoX mini series. There was a disparity between the ages of the characters (Kurt’s been a film star since the revolution – at least fifteen years ago – and he was an X-Man before that) and their depictions. He shouldn’t look like a teenager, is what I’m saying. When Megan was supposed to shapeshift from her buxom film-set appearance to her more ‘natural’ form she remained ridiculously male-gaze sexy – odd when you consider that her natural form was meant to be considerably more mutated. Pair this with the fact that most of the female characters have the same facial features and you can understand my dissatisfaction. But these are relatively small quibbles. Juan Frigeri has a knack for capturing body-language. The acting of his figures was good. And I absolutely loved the little visual nods to 616 and AoA continuity – including Kurt’s AoA costume and the reference to Dave Cockrum’s original Nightcrawler miniseries in the film poster. 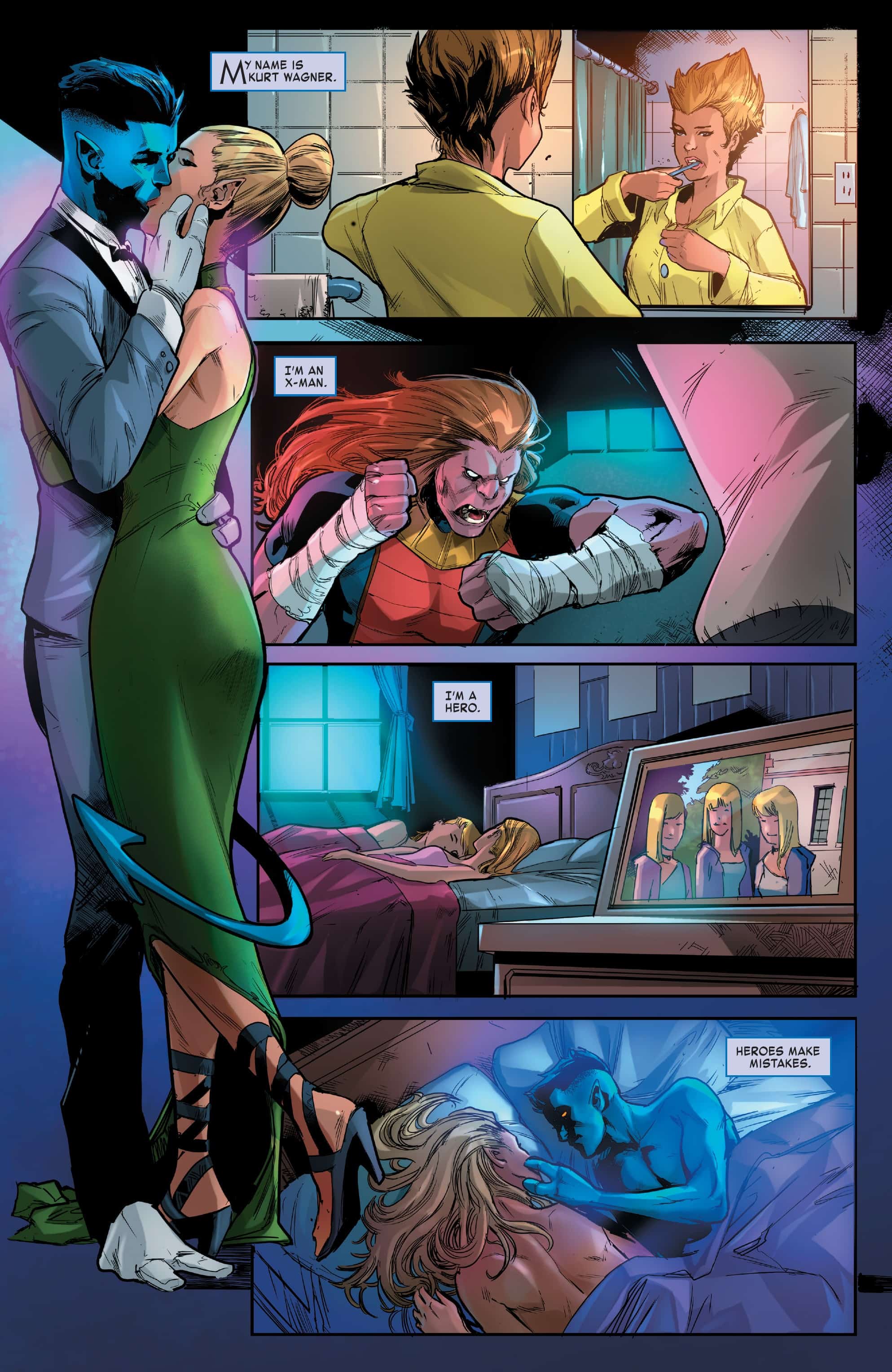 I was deeply satisfied with this issue. It is a many-layered, deeply nuanced, concept. And it’s a hell of a lot of fun. I can’t wait for the next issue.

This book is a complex mix of soap-opera-style drama, incisive social commentary, and a nuanced study of life on the fun side of a scary totalitarian regime. It's a hell of a lot of fun. And, yes, Nightcrawler is pretty danged Amazing.