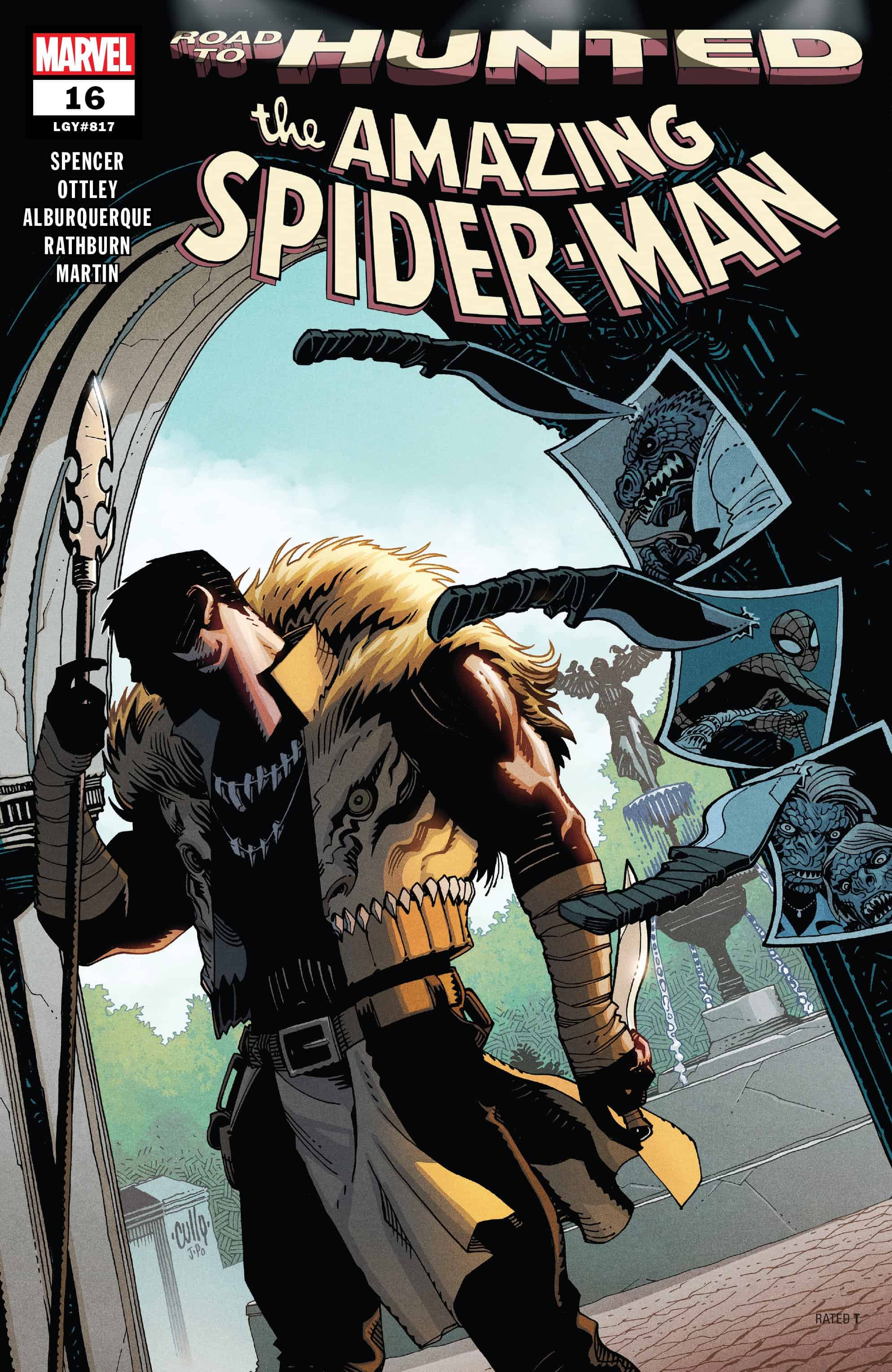 This double-sized issue splits its time between the life and times of Kraven the Hunter since he returned from the dead, and Lizard Jr.'s big night out.

Kraven, it seems, has been busy in the Savage Land, using the High Evolutionary's technology to engineer the perfect clone offspring of himself. He initially creates scores of them, but eventually, there is only one... 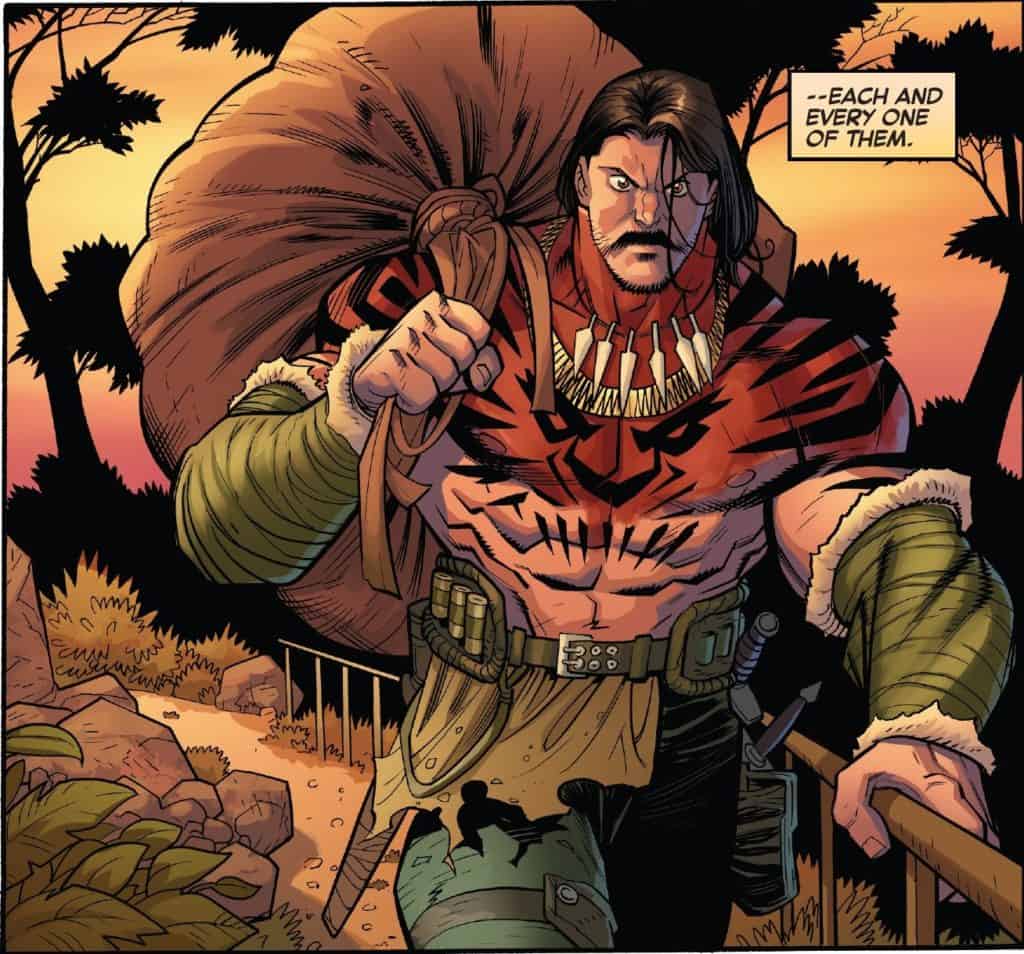 Together, Kraven and son embark upon a quest to return grace and nobility and honor to "the hunt." This involves teaching so-called "weekend hunters" what the concept truly means... 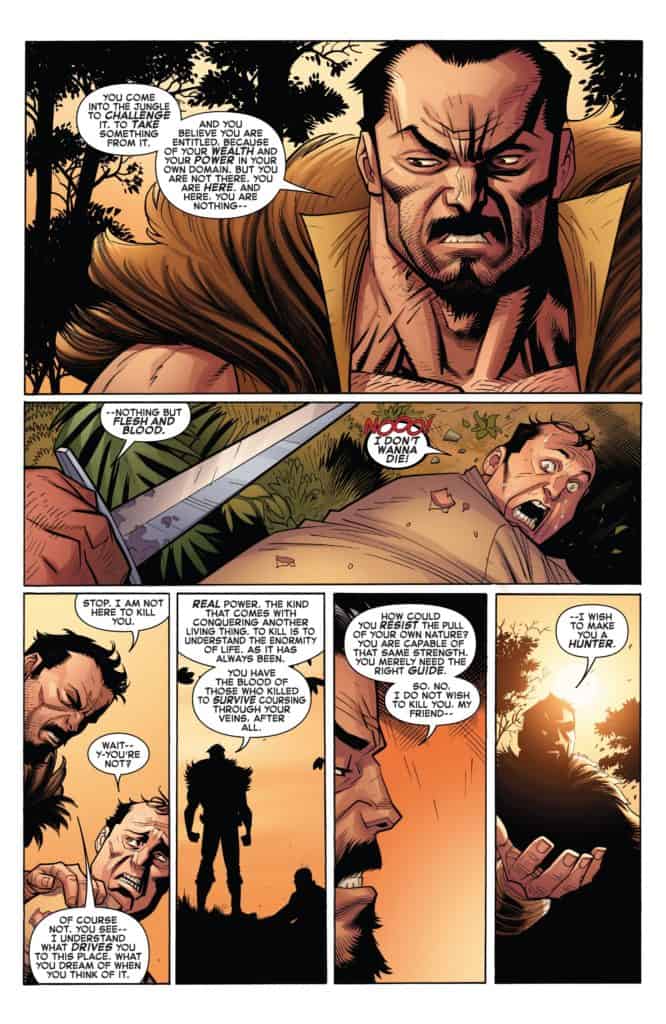 ...But his plan also involves capturing a number of animal-themed villains and teaching them what their part in the "noble hunt" involves. 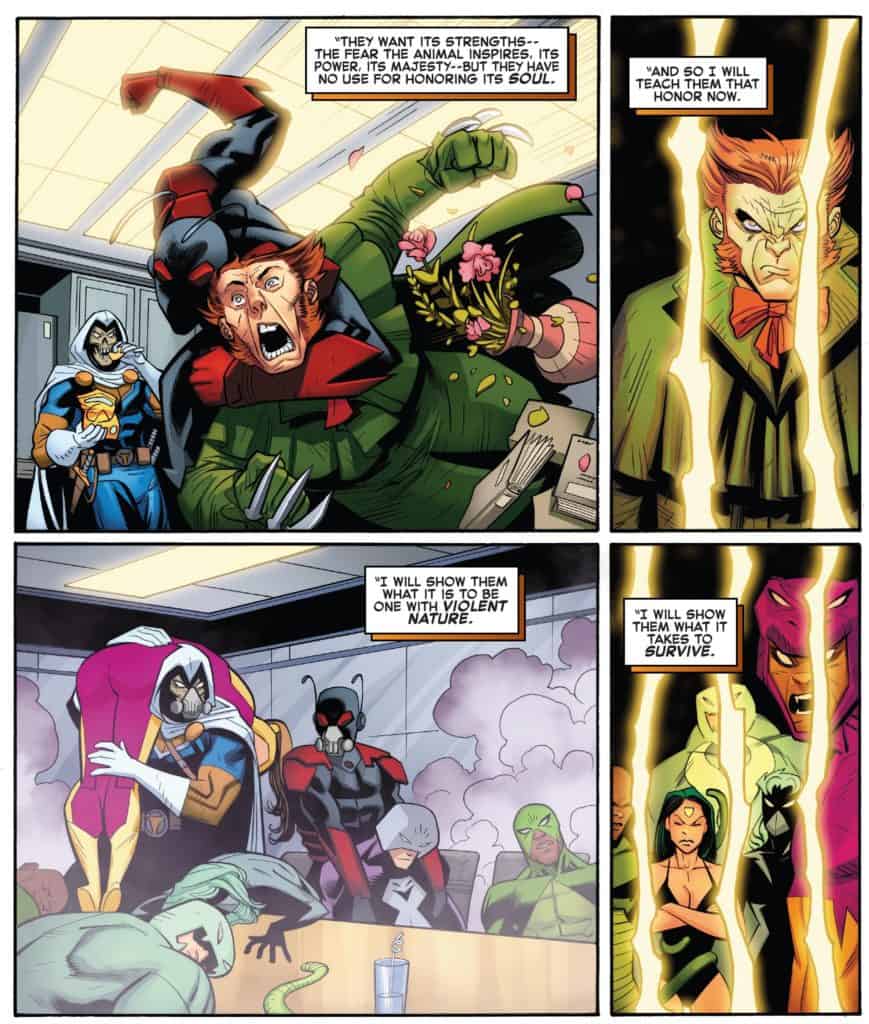 Meanwhile, in the B story, Billy Connor (a.k.a. Lizard Jr.) continues his night out on the town to sneak to a friend's party, but fate intervenes and his lizard-ness is very publicly revealed. 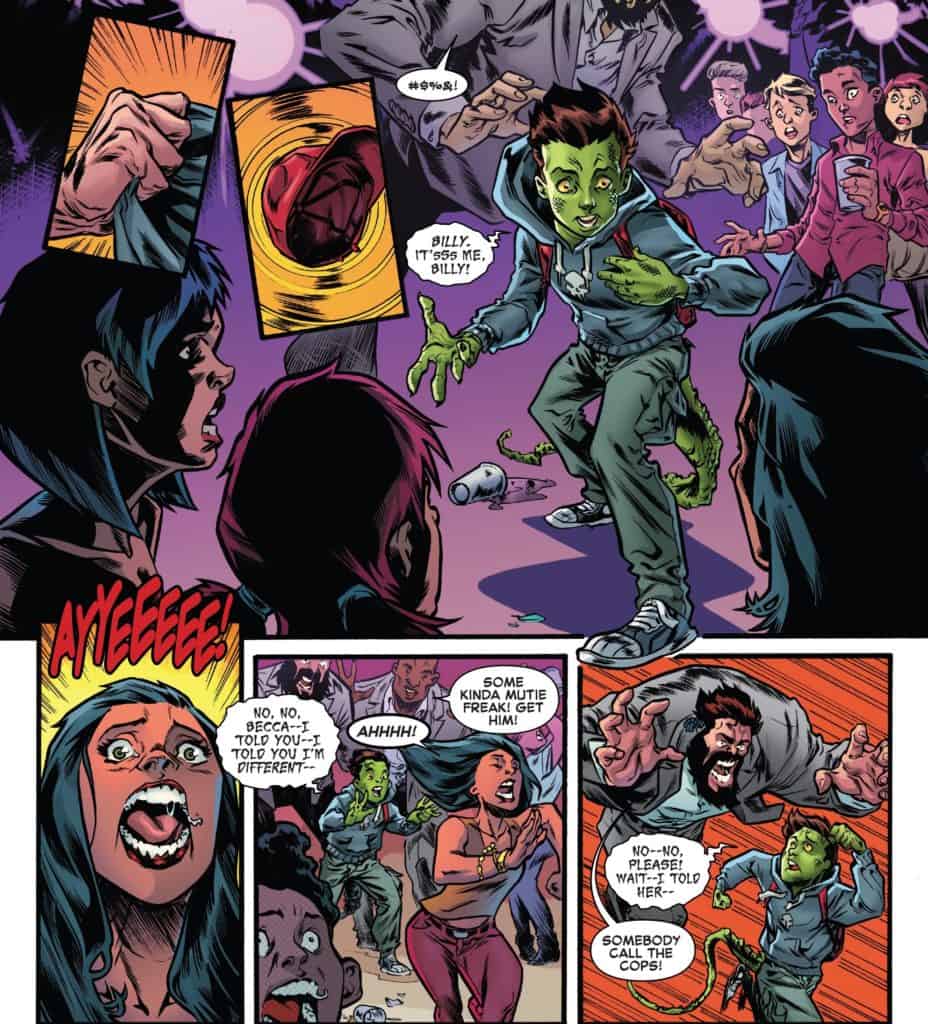 Alone and scared, Billy dashes outside, desperately trying to get home, but instead catches the attention of Taskmaster and Black Ant, who make short work of capturing him! 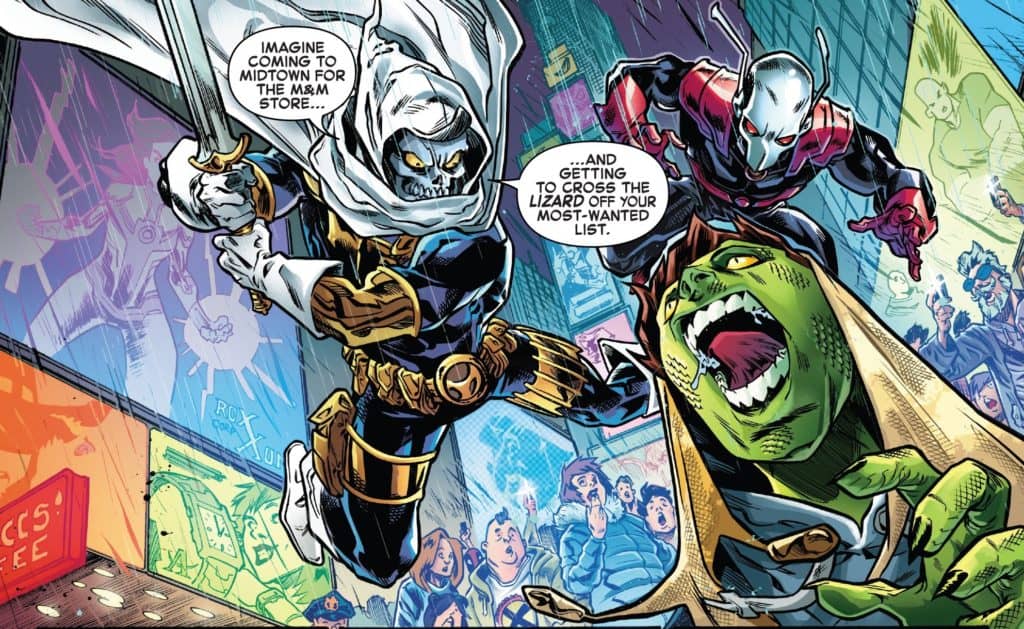 With his son in the wind, Curt Connors desperately tries to call a very sickly Spider-Man for help. Spidey gets his calls too late, but not before realizing that yet again Taskmaster and Black Ant are behind the kidnapping. Spider-sense is tingling, because something is brewing... something big.

There’s a father and son theme running throughout this issue, something the Spider-Man mythos doesn’t often get to play with except when reminiscing about Peter and Uncle Ben’s relationship (There was that one time Peter’s dad came back from the dead after being presumed dead for being a spy caught by the Red Skull, but then turned out to be a T-1000, but the less said about that, the better. Comics, folks!) Kraven Jr. (I’ll have to call him that because author Nick Spencer didn’t give him a name) is eager to embrace his father’s legacy, while Billy Connors runs from his father the Lizard’s. Their stories inevitably wind up intertwining, but that’s about it – there’s no major thematic or philosophical payoff from their opposing yet parallel journeys. Perhaps it is yet to come in the upcoming “Hunted” story. 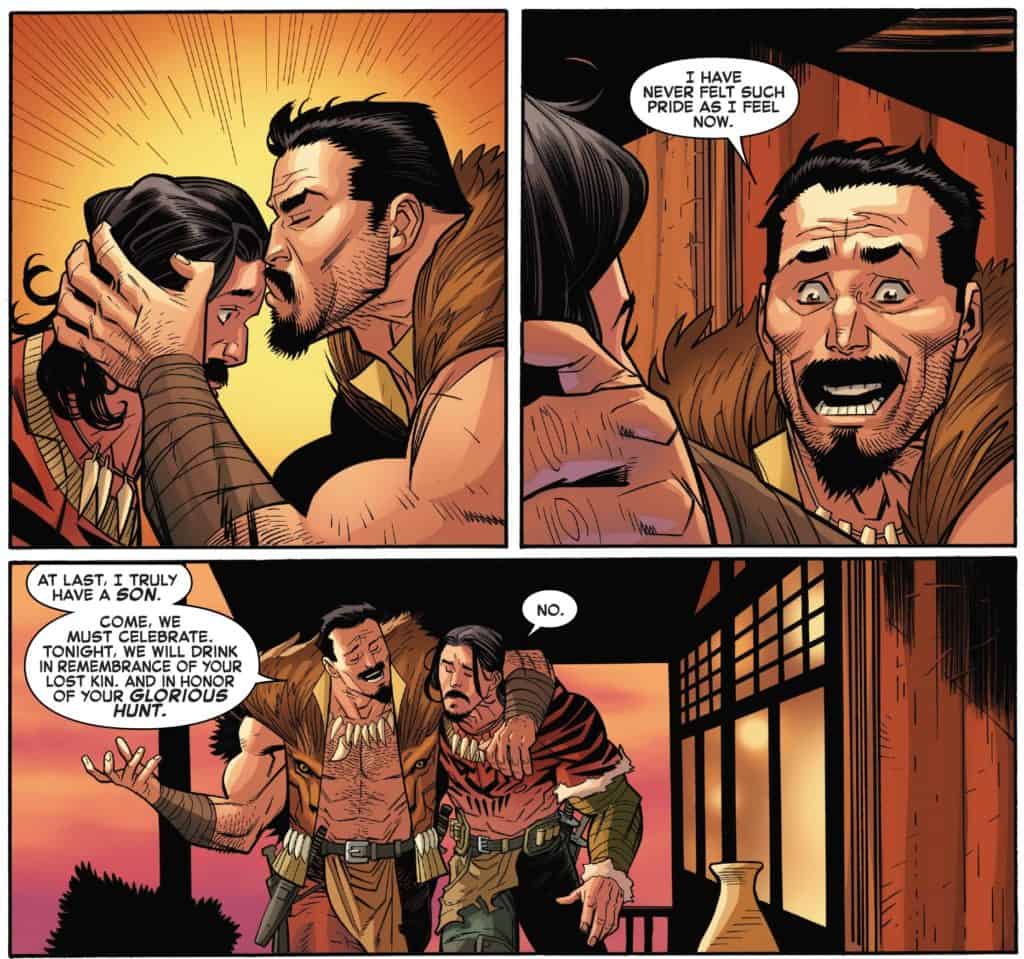 For a guy who’s entire deal is being a really, really good hunter who somehow made his way onto Spidey’s Top 10 Villains List for almost sixty years now, Kraven’s story takes some insanely convoluted and over the top turns in this issue. I haven’t read the story in which he returns from the grave or anything else with him that followed, so I can’t speak how true Spencer’s story is to what has gone on with the character since then – but speaking solely for this issue, the entire affair from the Savage Land, to the High Evolutionary, to the eighty-plus Kraven clones running around to the mega-scale capture-the-animal-themed-villain plot to the high-minded philosphizing about hunting – rings false. It’s just too big for Kraven the Hunter. He’s a guy who runs around in a loincloth and throws nets at Spider-Man, not a guy with a prison-mountain and a plan to turn all the world’s nouveau-riche hunters and a whole ark full of animal-themed villains into a comic book version of The Most Dangerous Game. Of course, this is just a prelude issue so maybe I’m overthinking it at this point, but given the amount of time Spencer has spent seeding this story, I tend to think not.

Which leads me to consider the larger problem here: Kraven the Hunter really shouldn’t be a major threat to Spider-Man. At the end of the day, he’s just a man – a very skilled man, but a man nonetheless – and Spider-Man is Spider-Man, complete with the proportionate speed, strength, and agility and oh yeah spider-sense of a spider. The great J.M. DeMatteis realized that, and gave the world “Kraven’s Last Hunt” in response, a brilliant swan song for a villain who realized he would never be up to his own ambitions. I’ll let others debate the rightness or wrongness of resurrecting Kraven some twenty-plus years after his ignoble death at his own hand; what concerns me is what Spencer’s doing with the character now. Kraven is, by his very nature, a small-scale character. His finest hour in “Kraven’s Last Hunt” works so well because it is an intimate psychodrama, claustrophobic and inward-looking in both scope and scale. By contrast, “Hunted” is setting Kraven up to have his big-screen moment, to be a summer blockbuster popcorn movie villain at a level we’ve never seen him operate at before.

And maybe it’ll work. I can’t possibly judge this story based solely on this prelude issue. But just the initial setup seems to reveal a basic misunderstanding of Kraven’s character on Nick Spencer’s part. I hope I’m wrong.

The B story, starring Billy Conners, plays out far more predictably, and with some seriously eye-rolling results. Of course Billy’s first outing from the sewers meets with his scaly hide being publicly outed, and of course he’s captured by Taskmaster and Black Ant, who just happen to be complaining about having not captured his father when he goes scrambling by. The entire sequence is a huge contrivance, designed for the sole purpose of maneuvering the Lizard into being an x-factor in “Hunted” that Kraven won’t see coming. It’s rote and predictable for any comic, and weak storytelling in any any medium. Spidey being sick doesn’t add anything to the proceedings other than to give him an excuse to not keep Billy from being kidnapped. But on a completely different and actually happy note, it warms my heart to see Spencer (apparently) working on getting Peter and Mary Jane back together. They belong together just as much as Reed and Sue or Lois and Clark, dammit! Watching her take care of Peter while he’s ill is an immediate throwback to the halcyon days of their marriage. 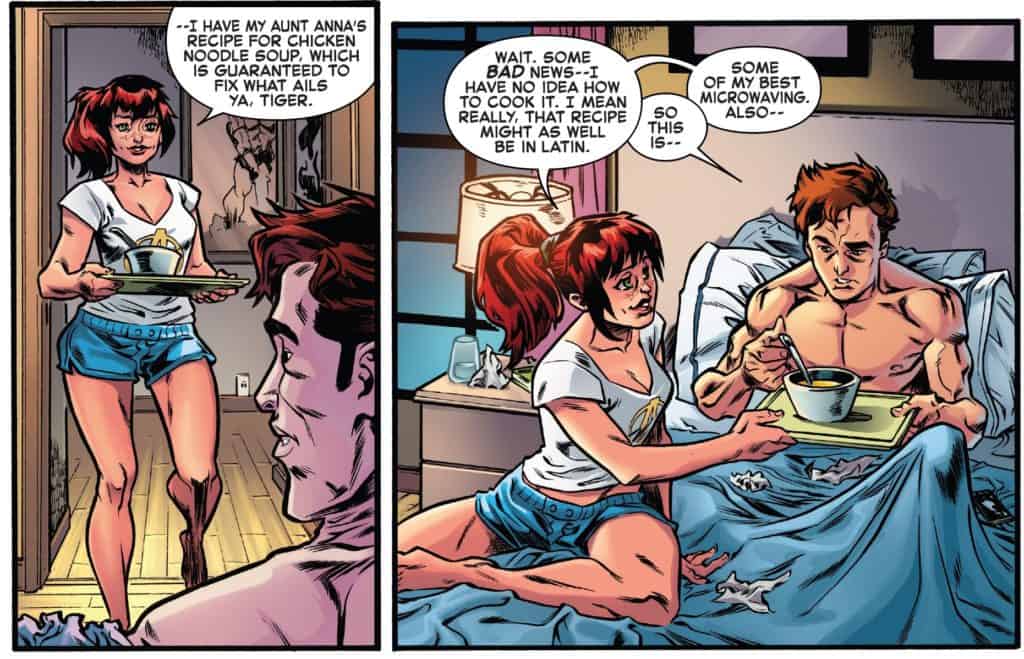 Unfortunately, the art is as suspect as the basic building blocks of this story. Ryan Ottley does his usual level of quickie slam-bang pencilling – it is high-energy, but has all the definition of an ’80s Saturday morning cartoon. It’s fine for what it is and he certainly has his fans; I just don’t happen to be among them. But the second story’s art by Alberto Albuquerque is downright awful, in my opinion. It’s amateurish at best, with figures half-realized– almost a low-tier version of Mahmud Asrar who isn’t quite ready for the big leagues just yet. His figures are inconsistent from panel to panel, and draws the worst Lizard I have ever seen in almost three decades of reading Spider-Man. He would be well-served to spend more time honing his craft. 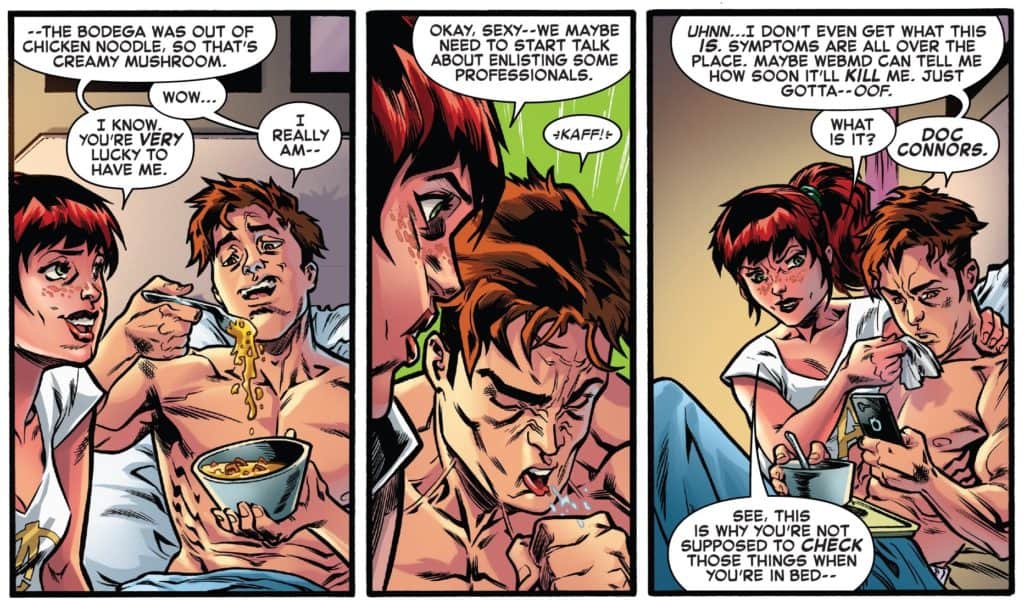 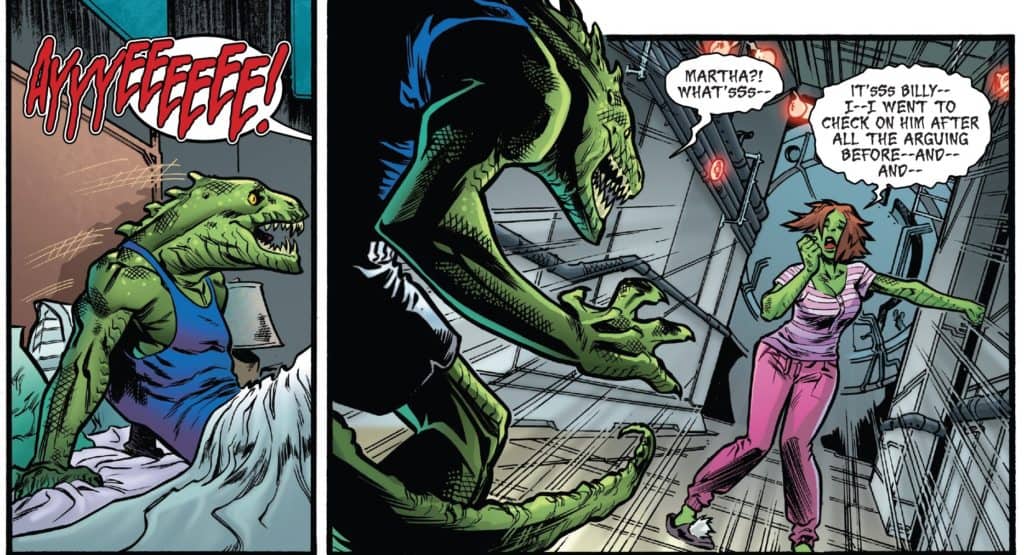 In the end, this issue is an extremely mixed bag, and not necessarily a good way. It sets up the basic premise for “Hunted,” but that premise in and of itself may prove to be utterly flawed in the long run. Time will tell.

Despite some high-minded ideas, Amazing Spider-Man #16 falls short of its ambitious goals. It may be a crucial lead-in for "Hunted," but as a comic unto itself, it just doesn't hold together.