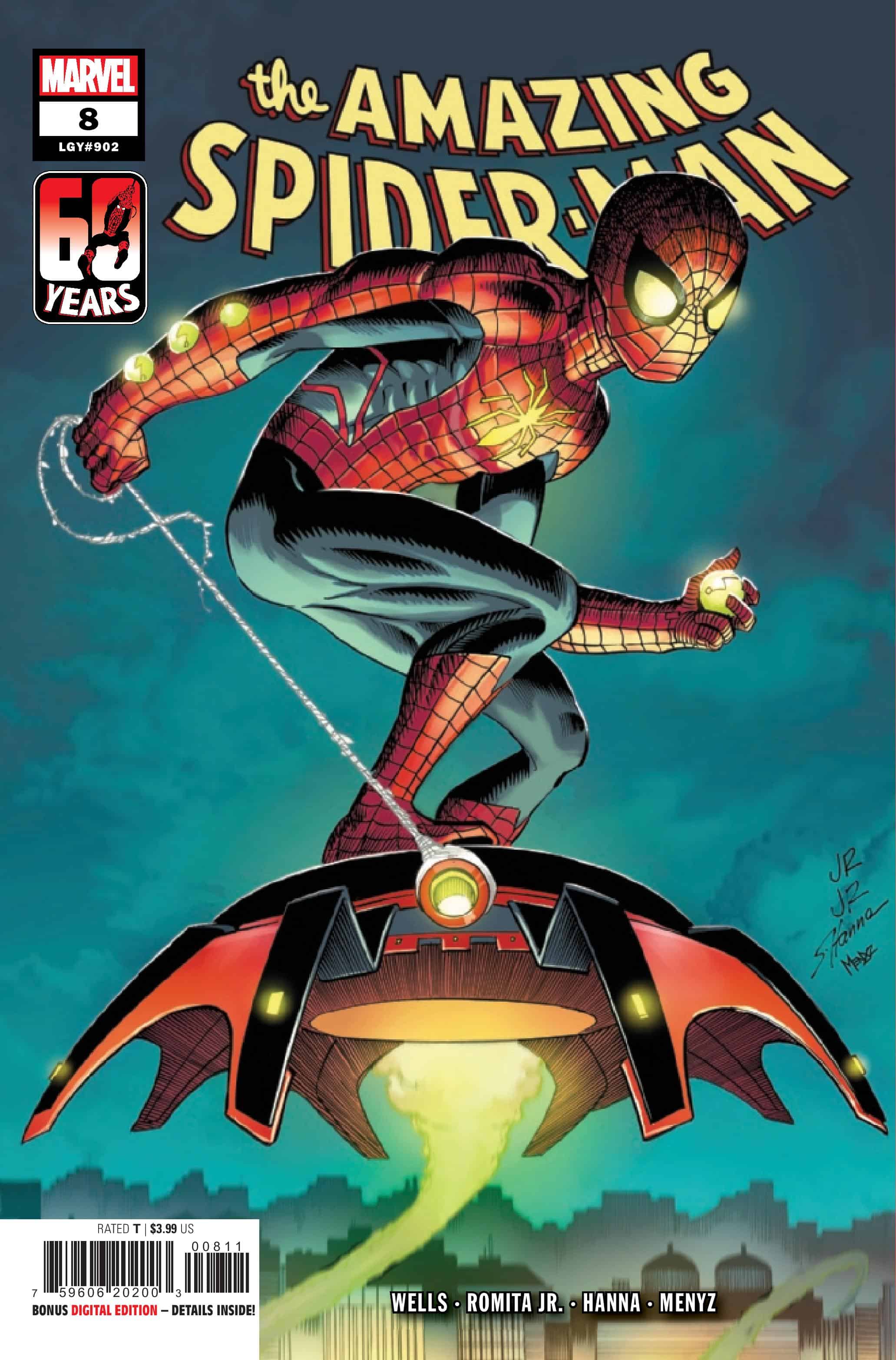 Spider-Man has a new costume and accessories that look vaguely…familiar. Is that a GLIDER?!

The cyclical nature of comics, and any sequential storytelling, can be a boon and burden all at once. It bakes in a template for new creatives to build on rather than having to build a world from the group up, but in the same breath, that established history brings with it expectations held by the audience. A character like Spider-Man represents the everyman, and to quote a powerful moment from a recent adaption of the Spider-Man mythos “Anyone can wear the mask. You can wear the mask”.

That notion is a powerful one, and one of the reasons that make writing for Spider-Man so difficult, as it’s almost impossible to please every fan since they see themselves – or at least, a more idealized version of themself – under the mask. Spider-Man, and by extension Peter Parker, has to be well defined and strike a perfect balance on the page to succeed, and for the first time of the current run, it feels like both aspects of the character may be realized.

The Amazing Spider-Man #8 – written by Zeb Wells, with pencils by John Romita Jr., inks by Scott Hanna, colors by Marcio Menyz, and lettering by VC’s Joe Caramagna – is a strong upswing compared to the last issue, moving between the back half of the Vulture fight, revealing more about Norman’s current status quo, and giving Peter a path forward as the Dark Web crossover looms. The fight with Vulture is a true knockdown, drag-out fight until Peter can make it to the new Oscorp, and reveal the suit Norman has designed, with a Goblin Glider included. Equipped with the new duds, (which should make their way into the next Insomniac game) Spider-Man makes quick work of defeating Vulture and providing to the villain that nothing he said is a lie.

Where the issue gets interesting is around the new suit and Norman. Early in the issue, Peter calls Norman and asks him to bring Peter the suit while Vulture is throwing him from the sky, but Norman refuses without an explanation. Peter jumps to the worst assumptions, but Wells’s script has a few tricks, and the latter reveals Norman’s fear of backsliding. He explains he doesn’t know what having his sins erased by a magic shotgun entails, but Norman and Wells characterize the Goblin as an addiction. If he gets back on the horse, Norman isn’t sure if he’ll be able to get off. The moment plays sincere, but with an Osborn, it’s never too hard to be doubtful of intentions.

The Peter/Norman scenes are the best plotline of the book, and if it remains a central dynamic for the run, it could help to focus the story. Between the time jump, the radical shift away from the Beyond era storyline and relationships, and burgeoning crossover with the X-Men, this run has been uneven at best. It’s been difficult to get a read on the throughline of the story, with the first story arc involving Tombstone fine but very by the numbers for a Spider-Man story. One can only hope that Wells has found his footing and voice for both Peter and Spider-Man, and this issue gives the indication that he may be close.

Wells’s internal voice for Peter also crystalizes in this issue and is reminiscent of a Frank Miller narration, bypassing words to give a stream of consciousness feel to Peter’s captions. It indicates Peter’s mind moving faster than his body’s action and works as an interesting bit of character work when paired with both his usual quippy dialogue and the lettering choices.

The distinction fits the atmosphere of the run so far, with a more on-the-outs and ragged Peter, and paired with Romita Jr.’s art, it’s not hard to make the comparisons to Miller’s styling. The book has proven before that stripping away all the flash and excess can lead to a powerful and enthralling story, and Wells and Romita Jr. are certainly building that narrative choice well in this story.

Romita Jr.’s art continues to shine but is a little more subdued in layouts and composition compared to the last issue. It does well for the talky scenes as they take the focus of the issue. Romita Jr. in this simplicity still captures motion extremely well, whether it be Peter web-slinging, the Vulture flying, or a surprise Goblin Glider gliding. Romita Jr. gives the art in the more kinetic panels a blur effect that evokes a blurry photo when the subject is in motion and imbues an additional layer into that movement.

It’s as though the subject is moving too fast for the panel to capture, rendering it out of focus. Combining the effect with the more simplistic panel layouts draws heavier attention to the change in structure, and thickens the emphasis on the page. It’s such a simple decision to make on the technical level but shows just how artful and in control of the craft Romita Jr. is. Pairing that with excellent lettering choices does a major amount of the work needed to elevate an already strong script.

Caramanga’s lettering is the most vibrant element of this issue, knowing when to be subtle and restrained while deliberately overwhelming the page to reflect Peter’s inner monologue and thought process in other sequences. The caption boxes rotate and stretch in tandem with Peter’s fall, and mirror the physical sensations of Romita Jr.’s art. The choice to alter the caption boxes at the moment convey the wall-crawler’s panic and desperation as well, throwing emphasis as needed during the hurtle to the ground. From the opening page, Caramanga’s lettering is training the audience to expect something different in these pages, and that guidance pays dividends throughout the issue.

In the opening pages as Peter’s falling towards a grove of trees implements a pair of caption boxes in each panel on the page, before breaking into one caption per panel as more SFX starts to take over. At first, it’s a large, single effect, like the sound of a cartridge breaking, before giving way to the overwhelming snaps of branches as Peter descends through the trees. At the height of the sequence, the SFX overtakes the panel, but never covers or loses the falling figure of Spider-man. It’s a balance that Caramanga writes perfectly, giving a sense of Spider-man’s interaction with the environment.

The Amazing Spider-Man #8 is a comic firing on all cylinders, taking a lackluster previous issue and performing a total 360 with the craft inside. From Wells’s script to Romita Jr.’s art and Caramanaga’s art, the issue doesn’t miss a beat and anchors itself in a strong narrative core that could center the aimless title going forward. Along with strong innovations in the art and lettering effects that fill the book, this issue is a great place to jump on for Spider-Man fans unhappy with the book thus far. With the next arc of the title building to a crossover with the X-Men, including some mutants that Wells wrote in a much more consistent title, it’ll have to be seen if Wells and the creative team can carry the momentum of this issue forward.