The Amazing Spider-Man #9: Late to the Party 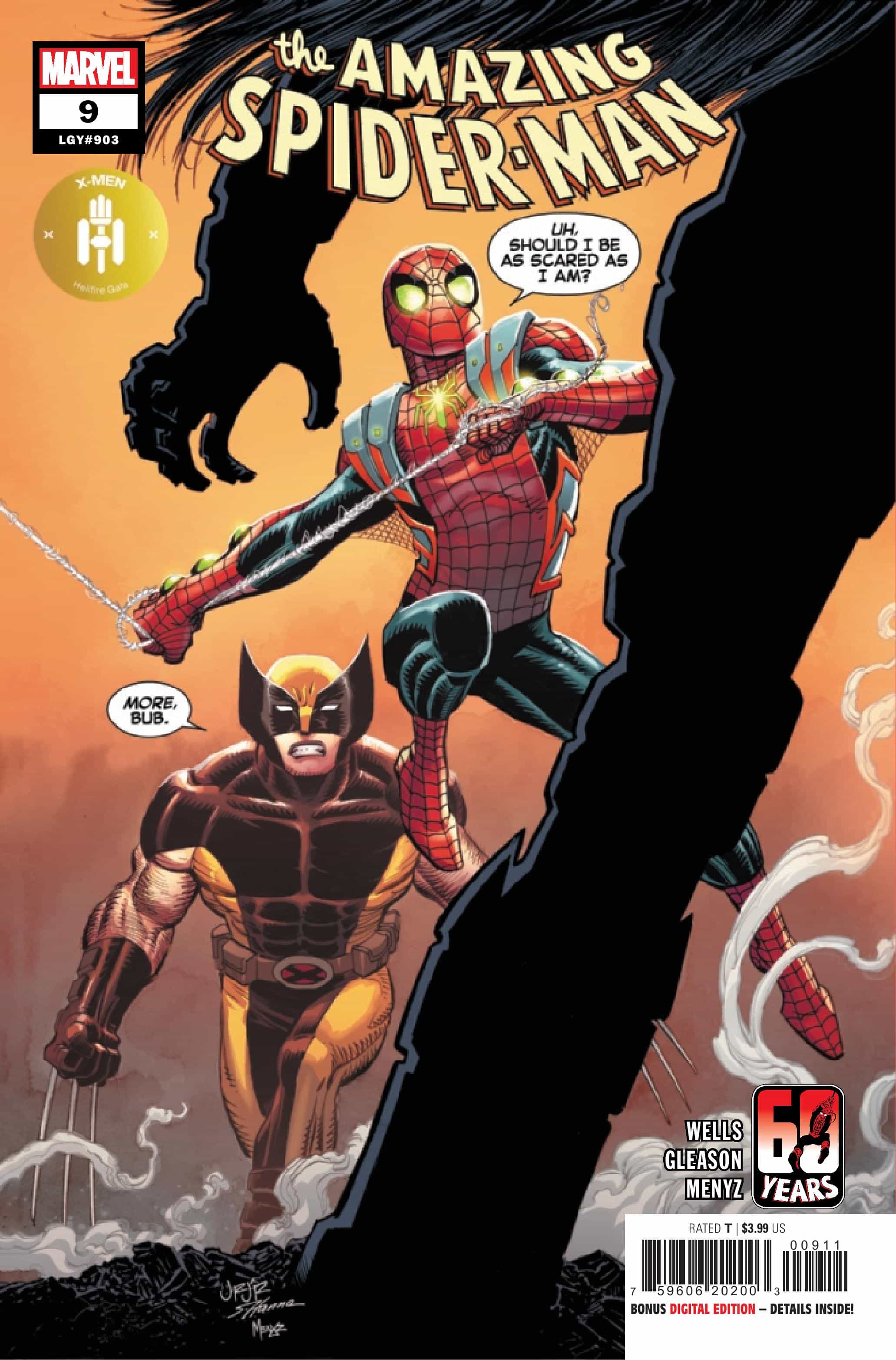 Something happens at the Hellfire Gala that sends Spider-Man and WOLVERINE on a dangerous mission all over creation! That’s right—the best duo in comics is back, but who are they fighting, and what (or who) are they fighting for? NO SPOILERS HERE!

The Amazing Spider-Man #9 – written by Zeb Wells, with art by Patrick Gleason, colors from Marcio Menyz, and lettering from VC’s Joe Caramanga – pivots from the Tombstone and Norman Osbourne plots and catches up with the events of this year’s Hellfire Gala one-shot. Moira McTaggert has taken over the body of Mary Jane and used her to get into the event before making an exit and holding MJ hostage.

From there, Peter and Wolverine team up and use a selection of X-Men to lead them to Moira and her Orchis goons and fight Moira in her robot body. The villain can get away, and the issue ends with MJ refuting Peter’s request to talk, hinting more at whatever happened in the gap between the Beyond era and Amazing Spider-Man #1.

Wells’s script is a mixed bag from this issue, working in sections to further the ongoing story, but stumbles when it sacrifices the flow of the issue for a recap of the Gala. That gives the issue an uneven reading, essentially resolving the MJ/Moira plot from the Hellfire Gala but serving as a limp follow-up to the annual X-Men event. The story feels like padding before the upcoming X-Men/Spider-Man: Dark Web crossover, along with trying to give the Hellfire Gala a bigger story that ends up falling flat. After the high point of terraforming Mars and setting up Arakko during the first Gala, this Moira plot doesn’t hold a candle to it.

That disappointment may come from the time between the Hellfire Gala one-shot and this issue, exactly two months apart. It’s hard to tell if that was an intended wait or a product of the continuous paper shortages and shifting release calendars. But in either case, that gap pulled the momentum from the story. The issue then also has to spend a large portion of the page real estate recapping the events of the Gala, switching to Spider-Man’s perspective but adding very little to the overall story.

Gleason’s art is where the issue shines, blending fluid action beats with stunning character work. It’s a good reminder that his issues during the Beyond arc were some of the best entries and furthers the case Gleason belongs on an ongoing monthly title. The best sequence in a book with plenty of solid panels is when Moira uses a hologram or cloaking device to make MJ look like the villain, and then the illusion starts to break. MJ is trying to assert control of her body, and Gleason does an excellent job showing the shift from Moira to MJ and then back, using a black and white glitch effect to show the two on the page. It gives the effect of elements of the art being erased and illustrates that internal struggle, letting the art speak to the conflict on the page.

Gleason matches that visual storytelling and eye to detail when the issue breaks into its many fight scenes as well. The artist’s rendering of the spider-sense is amazing, giving the effect a harsher, jagged edge that implies the pain and danger that’s heading toward Peter. It’s effective enough that Gleason once used the basic composition for a stunning cover in the previous run of the series. 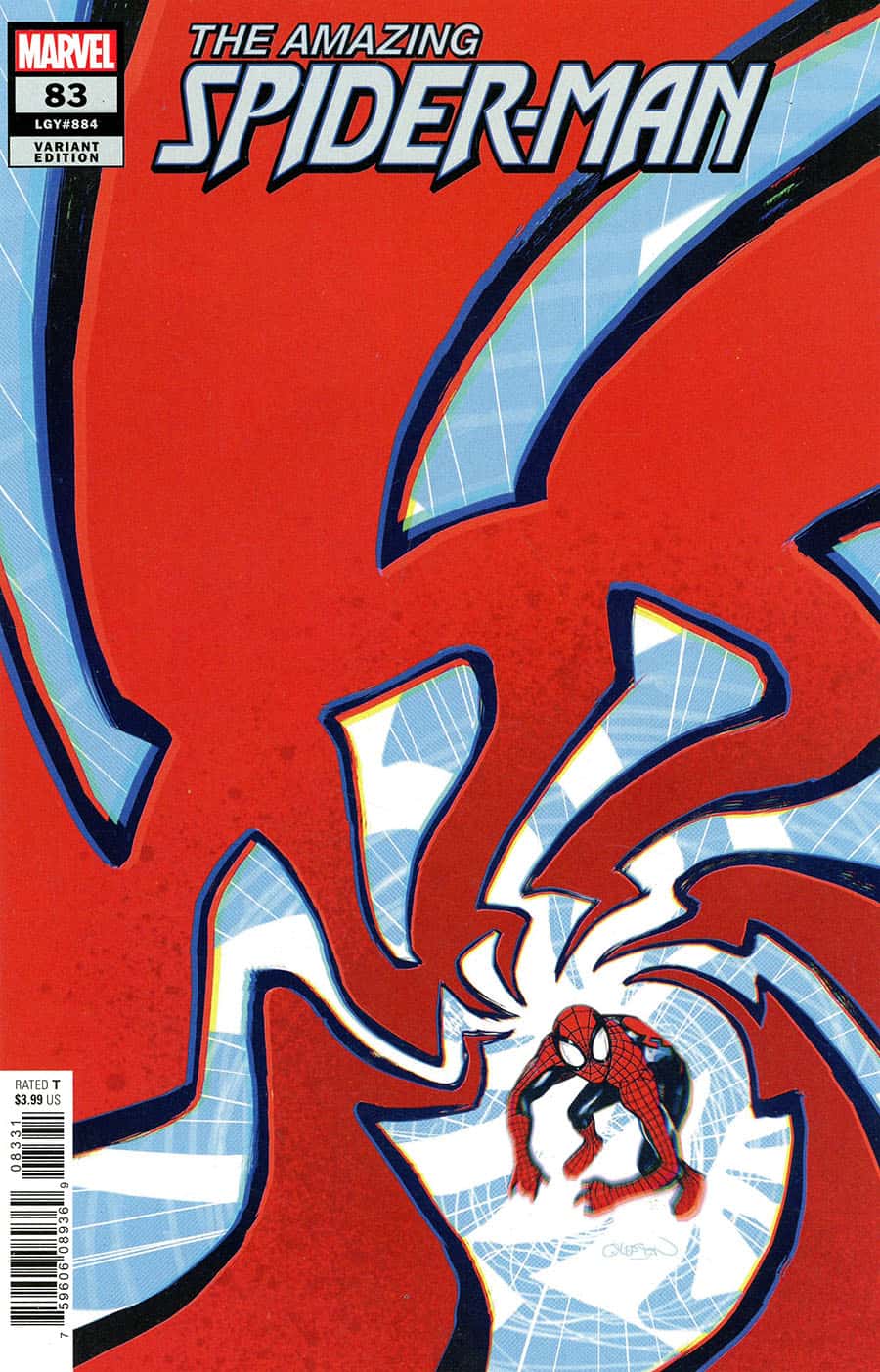 Combined with Menyz’s colors that bridge the gap between the action and atmosphere of the current X-Men line and the previous SPider-Man stories, the issue delivers a strong artistic outing even if the actual story leaves a lot to be desired. There are moments in this issue where the coloring adopts Marte Garcia’s use of lens flares and vibrant, almost otherworldly hues that feel straight out of any of the mainline X-books. Those moments work in tandem with the darker and more contained colors of the SPider-Man run, letting certain pieces of tech or kinetic action pop on the page, letting Menyz deliver the best of both books in this issue.

Amazing Spider-Man #9 is a narrative meh, but lush and kinetically drawn entry into a miz ongoing series. The issue manages to cross off another element set up previously but still feels directionless and uneven compared to the larger line at Marvel. While the story falls flat, in part due to the gap between this story and its set-up from the Hellfire Gala, Gleason’s art redeems the book and makes it worth picking up. Here’s hoping that Marvel will get him locked onto a book that allows him to shine as he does in this issue.

The Amazing Spider-Man #9: Late to the Party