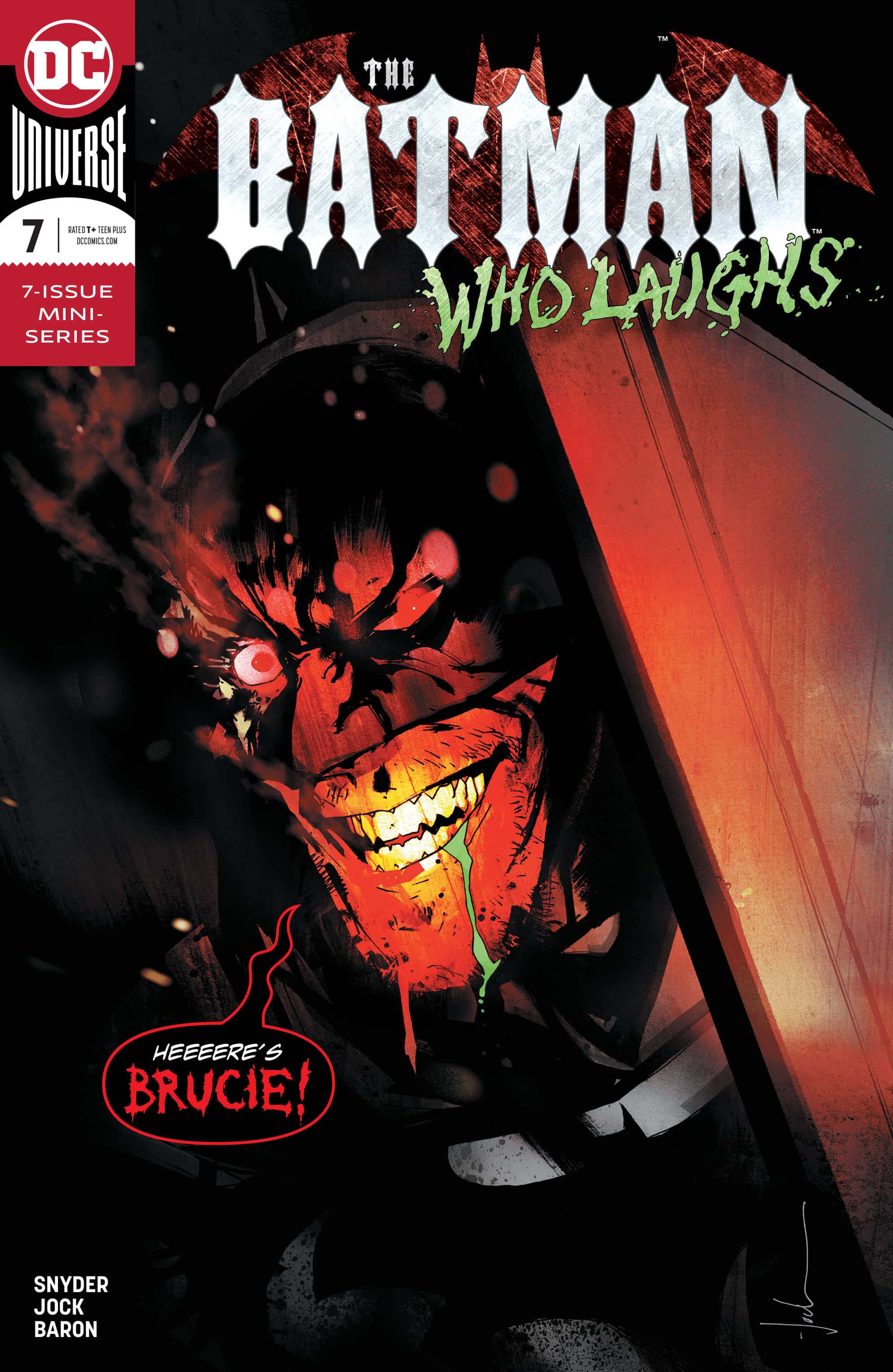 As Batman's final shreds of sanity melt away, his dark reflection, The Batman Who Laughs, appears to stand triumphant! 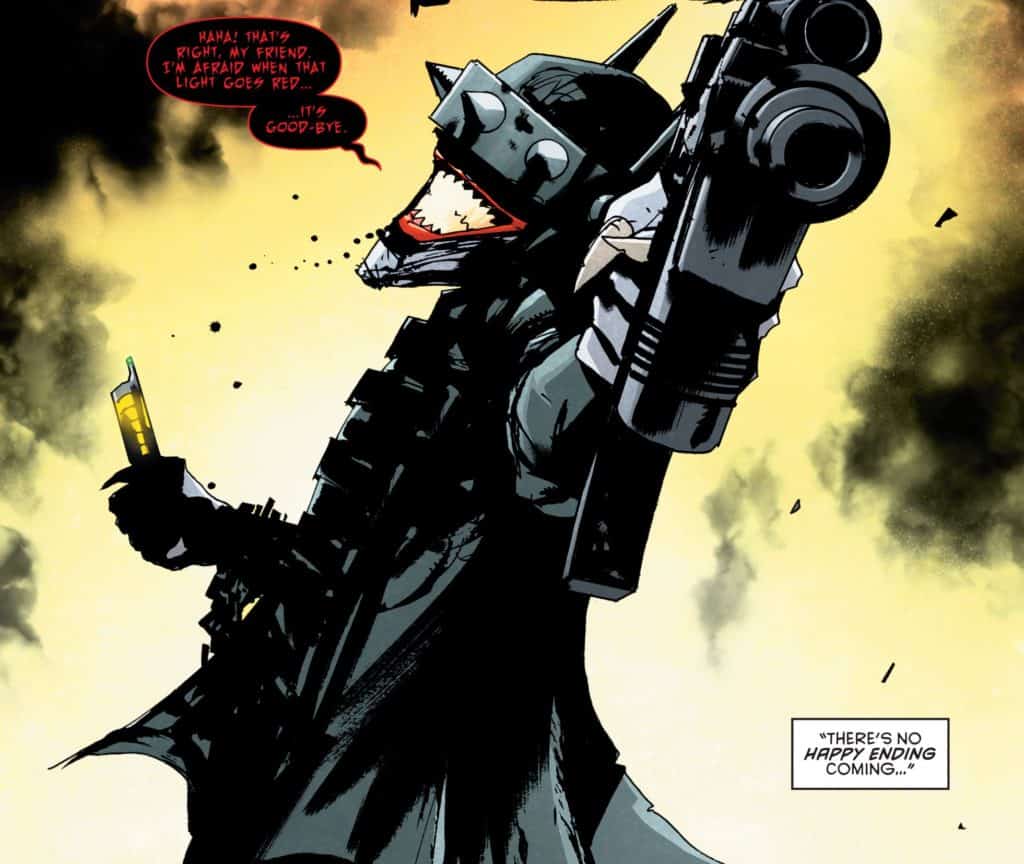 But Batman always has a plan... right? 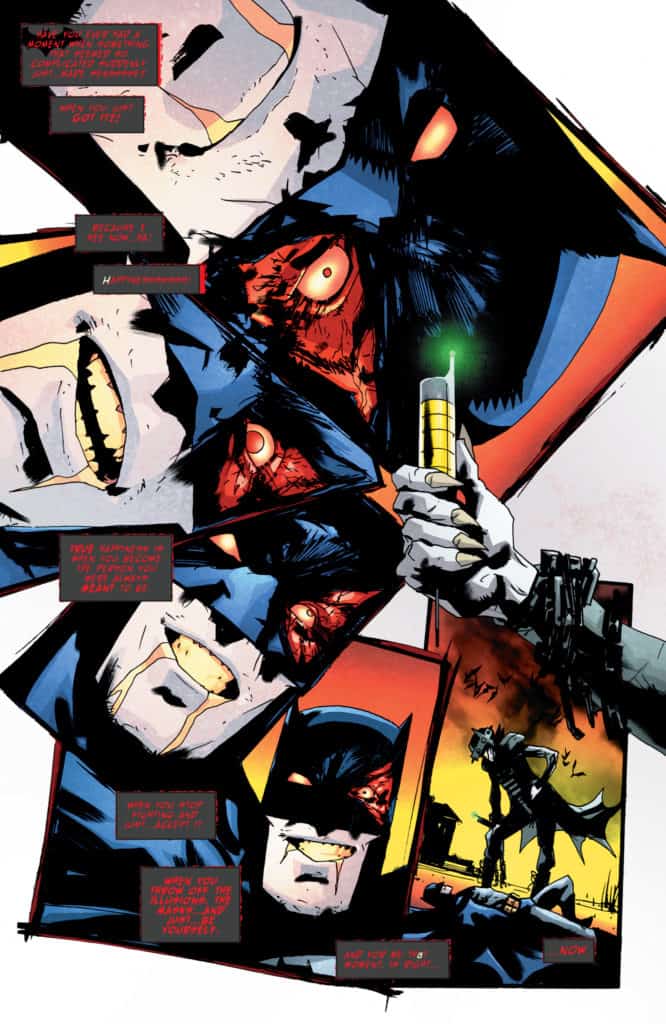 Meanwhile, Commissioner Gordon and his son James are locked in final battle with the other multiversal rogue Batman, the Grim Knight! And the fight isn't looking to good! 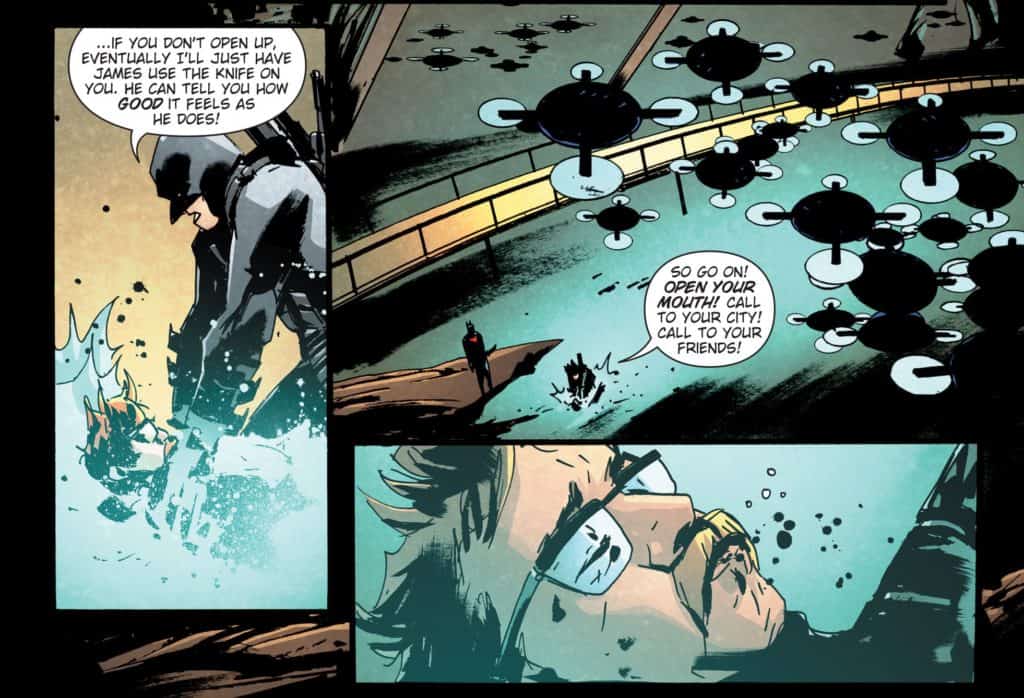 When Batmen go bad... can the forces of good muster to victor?!

In a lot of ways, The Batman Who Laughs feels like the true coda to writer Scott Snyder’s Bat-tenure as opposed to Last Knight on Earth. Sure, the latter may be getting the splashier packaging and bigger billing from both the author and DC’s marketing department, but the former serves as a bookend and spiritual heir to Snyder and artist Jock’s very first (and, in this humble reviewer’s opinion, very best) Batman yarn, “The Black Mirror.”

Both stories have similar themes: dark reflections of the hero, and the urge to give into the little voice inside our head that tells us to do the things we know we mustn’t. Most of the players are the same (Batman, Joker, Gordon, James Junior, Alfred), and of course there’s that dynamite creative team, who seem hardwired to bring out the best in one another. And even though “Black Mirror” sported a Batman who was actually Dick Grayson under the cowl, for thematic intents and purposes, the persona of Batman is more resonant than the man beneath the mask.

Of course, this being the grand finale to Snyder’s eight-year Bat-epic, the temptation has certainly existed to go bigger and out with a bang, which is where The Batman Who Laughs comes into the mix – and proves to be a very different beast than “Black Mirror.” Whereas “Black Mirror” was small, intimate, and tightly-plotted, The Batman Who Laughs is big, sprawling, sorta-epic, and messy. By far the longest-lingering fallout from Snyder’s Final Crisis-lite Dark Knights: Metal, this series’ title character who is a very literal bastardization of Batman and the Joker just refuses to go away – for better or worse. Snyder sure seems to be in love with the concept of a malevolent Bat-Joker who is equally sadistic and ten steps ahead of everyone, and isn’t shy about using him to present something of an ultimate challenge for Batman. After all, what’s harder than overcoming the worst version of yourself? But the question the series inadvertently presents but fails to answer is: can readers care as much as Snyder about this character.

Overexposure can be real killer, and even before he makes his next star turn in this month’s Batman/Superman #1, the BWL feels as though he’s worn out his welcome. He’s a guy designed for shock value and superficiality, not deep and abiding motivations and character arcs. He shares much with Spider-Man villain Carnage in that respect. And, as an obstacle for our hero, he’s extremely effective. But how many times can Snyder pull the same trick with him and have it work out for the best?

Not many, as it turns out. Batman himself has slowly been turning into his foe throughout this series, and since it’s a foregone conclusion that such a change can’t possibly be permanent, the journey of how Bruce overcomes this particular challenge is what’s most interesting in this scenario. The problem is, by this final issue, Snyder has so many plates spinning that by the time Batman finally does win the day, the reader is left in something of a stupor as to what’s just transpired because of the sheer amount of plot being lobbed at them. And a lot of it’s unnecessary. What was the purpose of the young Bruce being brought in? Why was the Grim Knight there, other than to tie into video games? What was the Joker’s deal again? The series might make more sense upon a second reading, and Snyder should be lauded for not spoon-feeding easy answers to readers. But at the end of the day, the story still has to make sense. And its title character should feel like he has more dimensions than one.

I have to give Snyder a lot of credit, though, for bringing Commissioner Gordon and his son James full-circle from where they were back in “The Black Mirror.” In that story, we learn that Gordon’s son grew up to be a severely disturbed and psychotic man, harboring a lifetime of delusional resentment toward his father. But by the time of BWL James has (maybe) been redeemed, and his father has cautiously extended an olive branch in reciprocation. This is a story – and relationship – that Snyder has been nursing for a long time (including through Batman Eternal), and the dividends of that long game finally come to fruition in this issue. It’s not the most emotionally resonant conclusion imaginable, but it’s satisfactory nonetheless.

On the art front, we have Jock, who – although an industry legend – feels a bit rough around the edges this issue, despite his usual sketchy style being in full effect. This has been the case throughout the entire miniseries. His inking is still wonderfully complementary to his pencils, and he’s greatly bolstered by David Baron’s unearthly coloring, but I fear his pencils are beginning to show signs of being long in the tooth.

Special credit should be noted for Sal Cipriano, whose imaginative letter has, from start to finish, highlighted the wonderful and unique things that can be done with computer-generated lettering. The way he not only shifts font styles, but also letter and word balloon colors throughout the series to reflect Batman’s steady descent into madness not only gives each page a very distinct look, but marries the lettering to the art in a truly dynamic and organic way.

Ultimately, this series has been fun, but maybe laboring a bit too much to be more than it is. While Snyder and Jock are a combo always worth checking out, this issue proved they bit off just a bit more than they could chew with the plot this go-around. That and, for god’s sake, please give The Batman Who Laughs a rest for a bit.

…Whoops, too late. Over to you, Williamson!

The Batman Who Laughs #7 tries to tie up the multiple and myriad plot points this miniseries has had going, and does so, but in a way that feels messy, unconvincing, and overlabored in its delivery. The art is gorgeous but at the same time could be better, and the story is trying really hard to convince readers it has something to say - whether it does or not is up to the reader, but the fact that it's as nebulous as it is speaks to the general sense that this series' eyes have been bigger than its stomach from the start.