The Conjuring: The Lover #1: Bump in the Night

The Conjuring: The Lover #1 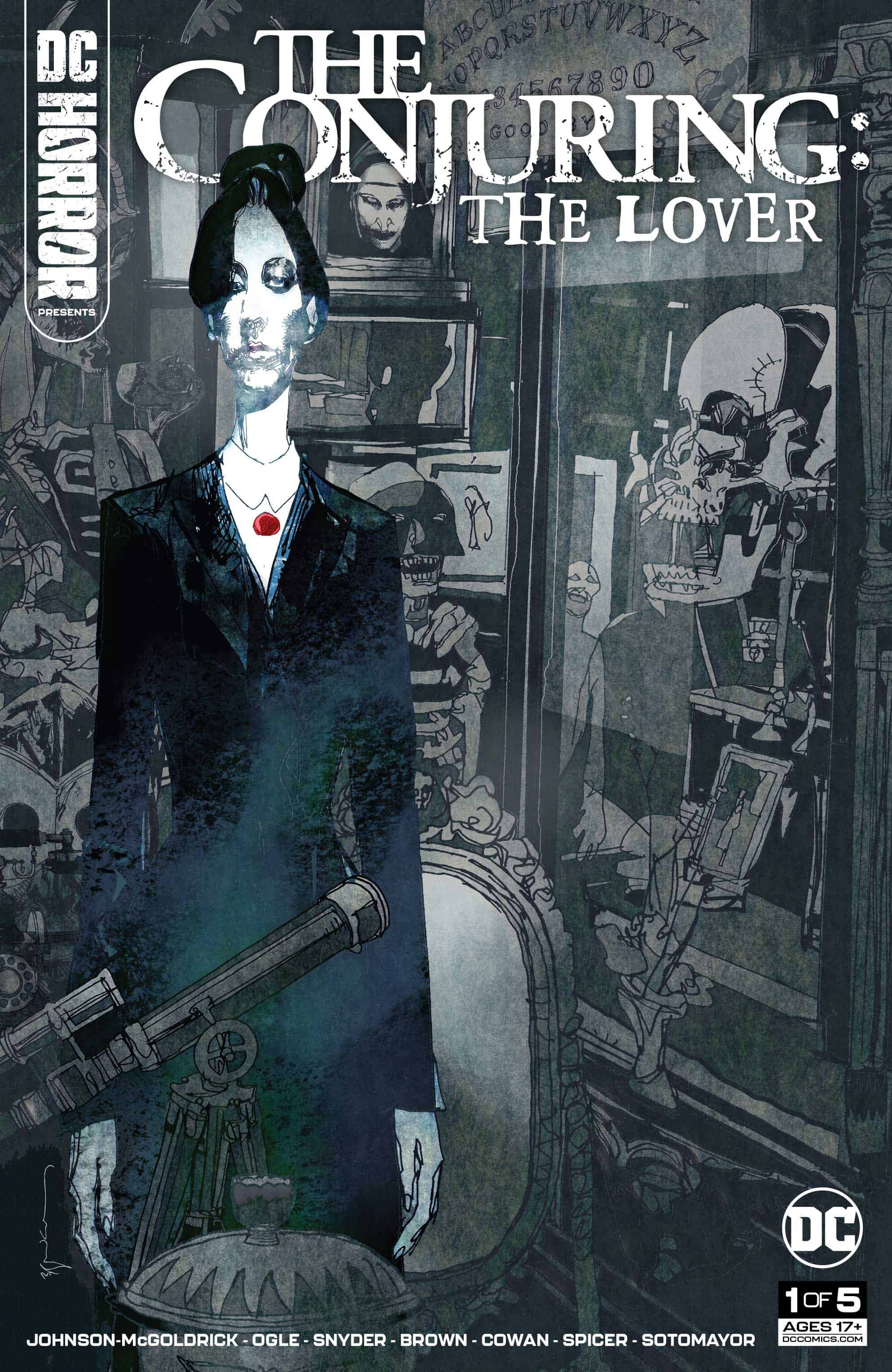 The terrifying debut of the tie-in to The Conjuring: The Devil Made Me Do It begins here, with a story that's bursting at the seams with clues about the new film. Meet Jessica. Jessica just returned to her freshman year of college after winter break, bringing with her the anxieties of last semester's poor grades, the awkwardness of facing a boy she wishes she'd never slept with, and an undeniably unnerving feeling of being watched. She soon comes to realize that something evil made her its target, and it will not rest until it has her in its unholy grip. But why did this sinister presence set its sights on a seemingly normal college freshman? Read this nerve-racking tale, creepily crafted by Conjuring screenwriter David L. Johnson-McGoldrick and Rex Ogle with heart-stopping art from Garry Brown and chill-inducing covers by Bill Sienkiewicz, to find out! 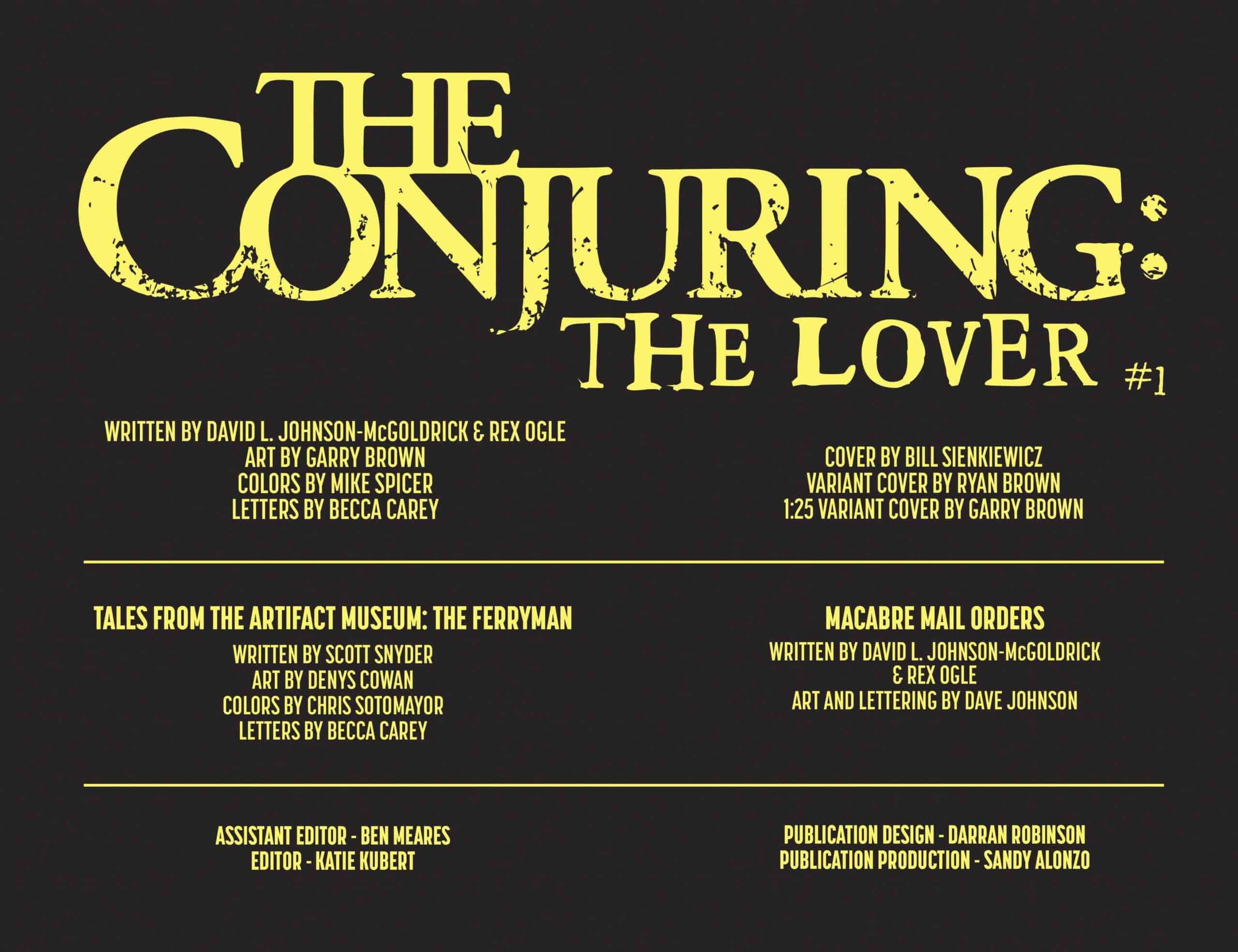 Few contemporary horror films have had the staying power of The Conjuring series. Starting with The Conjuring in 2013, the series has spawned several sequels and spinoffs with more in the works. The third film in the main series and eighth overall, The Conjuring: The Devil Made Me Do It, is set to be released in North America on June 4th. Acting as a prequel to the film, The Conjuring: The Lover #1 is the first in a five-part series. The issue contains two short stories and a few pages of classic comic book advertisements.

The first and main story, “The Lover,” is written by David L. Johnson-McGoldrick and Rex Ogle. “The Lover” acts as the main story of the issue with “Takes from the Artifact Museum: The Ferryman,” written by Scott Snyder, as a backup story. The two “advertisements” Johnson-McGoldrick and Ogle are a throwback to the mail-in ads prominently featured in older comic books are a fun and excellent addition. “The Lover” follows Jessica, a college student returning to Danvers University in Connecticut after presumably a winter break in 1981. Jessica seems like any other college student. She has friends, a former fling pursuing her, and schoolwork to juggle, except there seems to be something sinister watching her. While not much can be said just yet, we are shown that Jessica has a childhood friend named Katie who seems to be a key to Jessica’s mysterious lurker. Determined to get her grades up, the majority of “The Lover” is spent with Jessica studying. There is a short scene in the library of Jessica studying at a table alone which brilliantly shows how horror can be masterfully executed in a comic book. Films have jumpscares but comics can do something familiar within the medium. The page is divided into five panels all depicting Jessica alone at a table with another study space behind her separated by a case of books. Slowly, in each panel, the other study space gets darker and darker. Gradually we see what might be a lingering light turn into two glowing eyes in the next panel. The next panel shows a hand creeping along the end of the bookcase. It is moments like these that demonstrate what a horror comic can accomplish that other types of media can’t. These panels demonstrate that the true stars of the story are Garry Brown’s art and Mike Spencer’s colors. 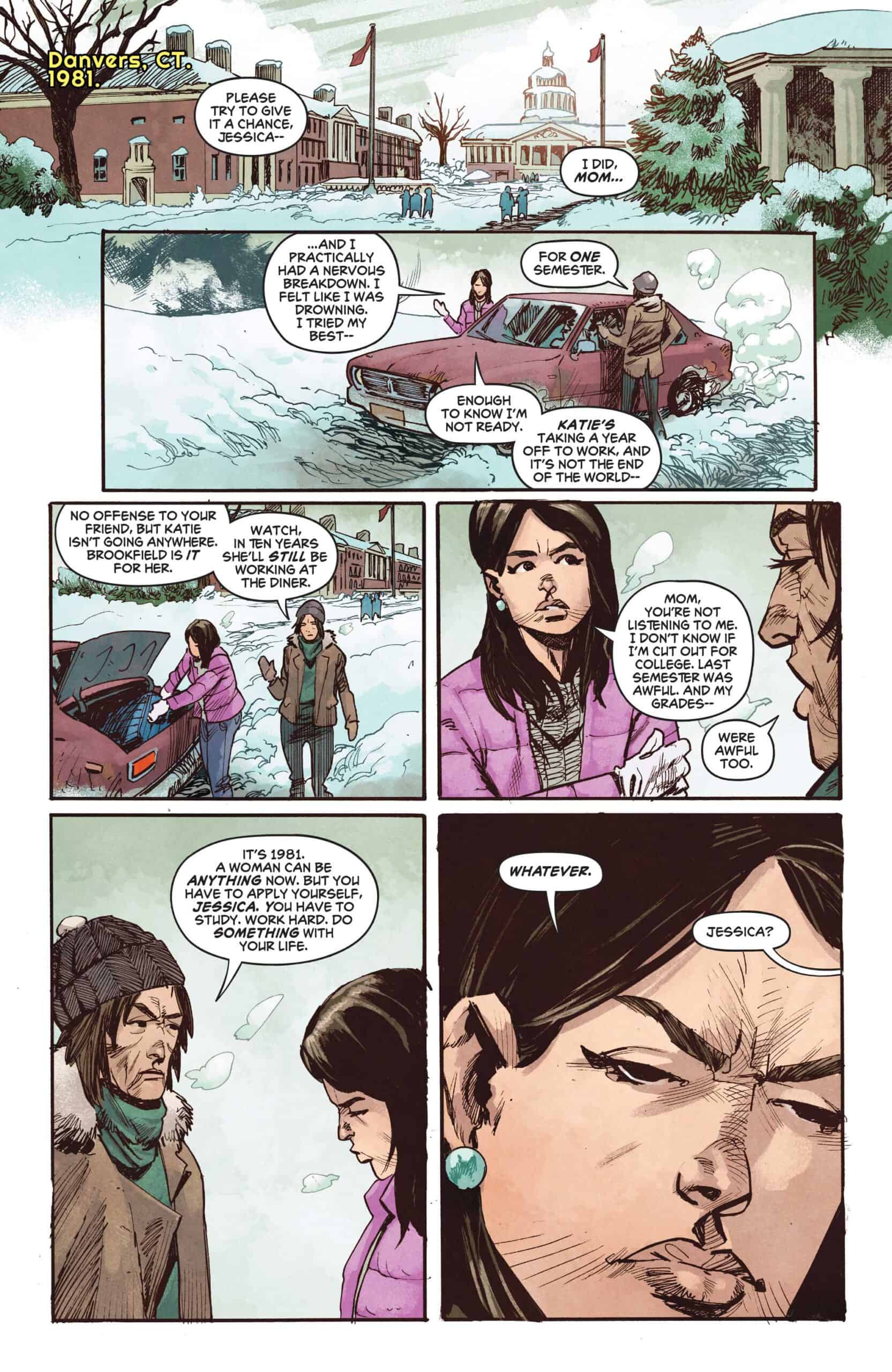 “Takes from the Artifact Museum: The Ferryman” reads exactly like a ghost story that should be told around a campfire. The story is a short standalone story written by Scott Snyder with art by Denys Cowan and colors by Chris Sotomayor. Cowan’s razor-sharp details and Sotomayor’s colors are a perfect pair with Snyder’s lightning-paced horror story. A man recalls his story from the backseat of a taxi. When he was young, two friends dared him at a funeral to take a coin from the deceased’s mouth. The coin is placed there to pay the Ferryman– to ensure safe passage to the other side. The boy steals the coin and thinks nothing of the stories of the ferryman coming after those who steal his fee. The man recalls the several tragedies that follow him, like the accidental deaths of his parents, a deadly car accident in high school, and eventually the death of his wife and child. Attributing it all to the coin he stole, the man finally tracks down the coin so he can pay the Ferryman. Like the library scene in “The Lover,” the final panels of Snyder’s story are horror at their finest. The desperation of the man paired with the realization that the taxi, and who is driving it, has brought him to a smelting plant is worthy of any classic horror story.

The Conjuring: The Lover #1 feels much more than just a movie tie-in. While still acting as a prequel to the upcoming film, this issue stands on its own as an excellent collection of two great horror stories with an added bonus of some fun and classic mail-in "advertisements."

The Conjuring: The Lover #1: Bump in the Night