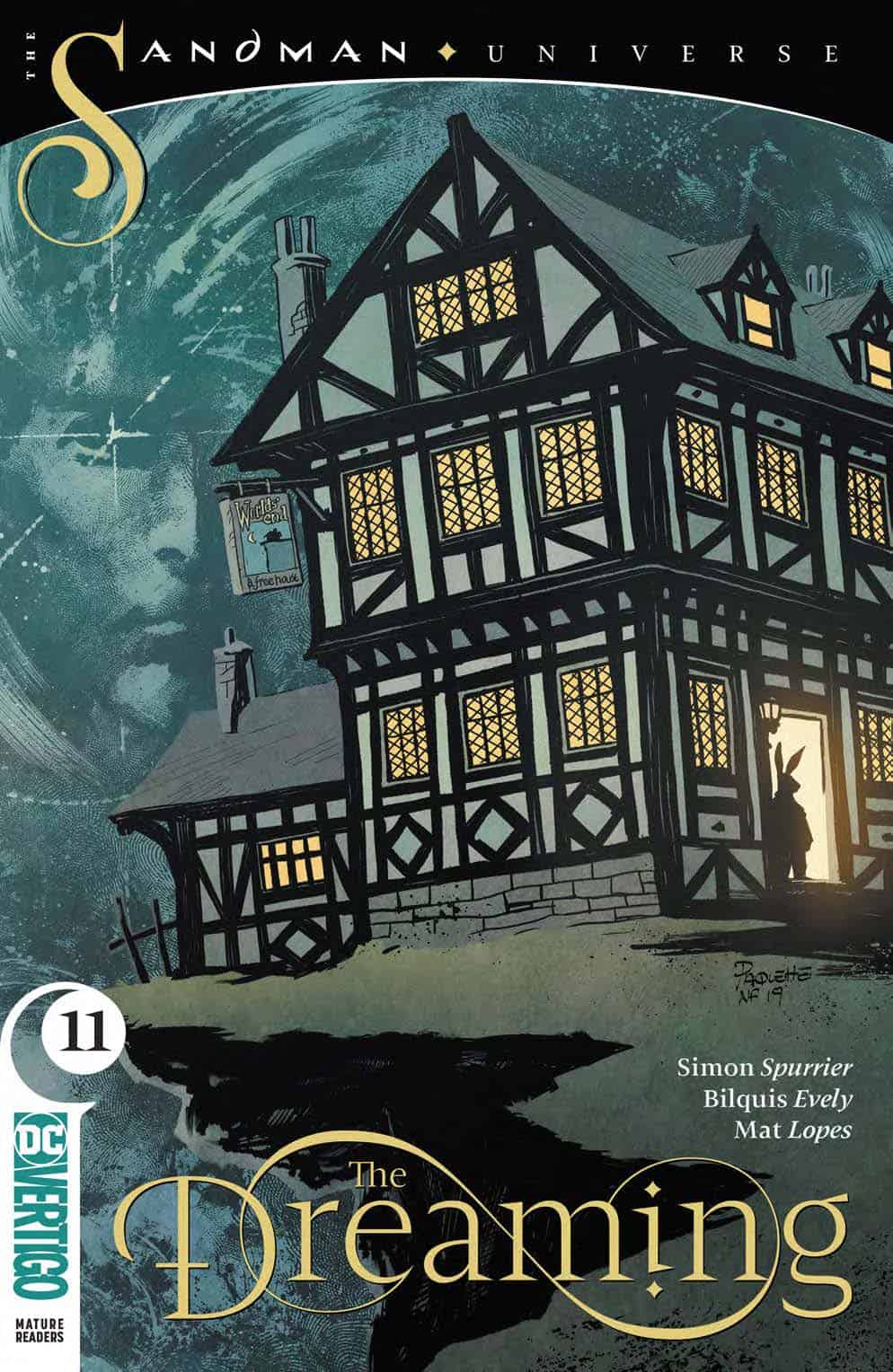 Dora and Matthew find a bit of shell from the Primal Serpent’s egg. Using the fresh scent from the egg, the baku follows Dream’s trail to a place between worlds. Leaving Hell and a lovelorn Balam behind, the trio soon arrive at the Worlds’ End Inn, where the inn’s occupants gather in the back room, captivated by the tale of the Ur-Gods and oblivious to the flames erupting from the top floor.

Dora and Matthew track Dream to the Worlds’ End Inn, where flames leap from the upper floor. They find the occupants of the inn in a back room spellbound by the circular tale of the Ur-Gods. Matthew falls under the spell as Dora searches for a drink and finds Long Lugs, a dying, barely-tangible, fertility god, attempting to put out the fire.

The tale of the Ur-Gods leaps from one disconnected tale to the next as we follow mankind’s limited attempts to find understanding in an infinite universe. Lugs tells Dora about a mysterious stranger who visited the inn, and the narrators of the chronicles of the Ur-Gods who soon followed and set fire to the inn. 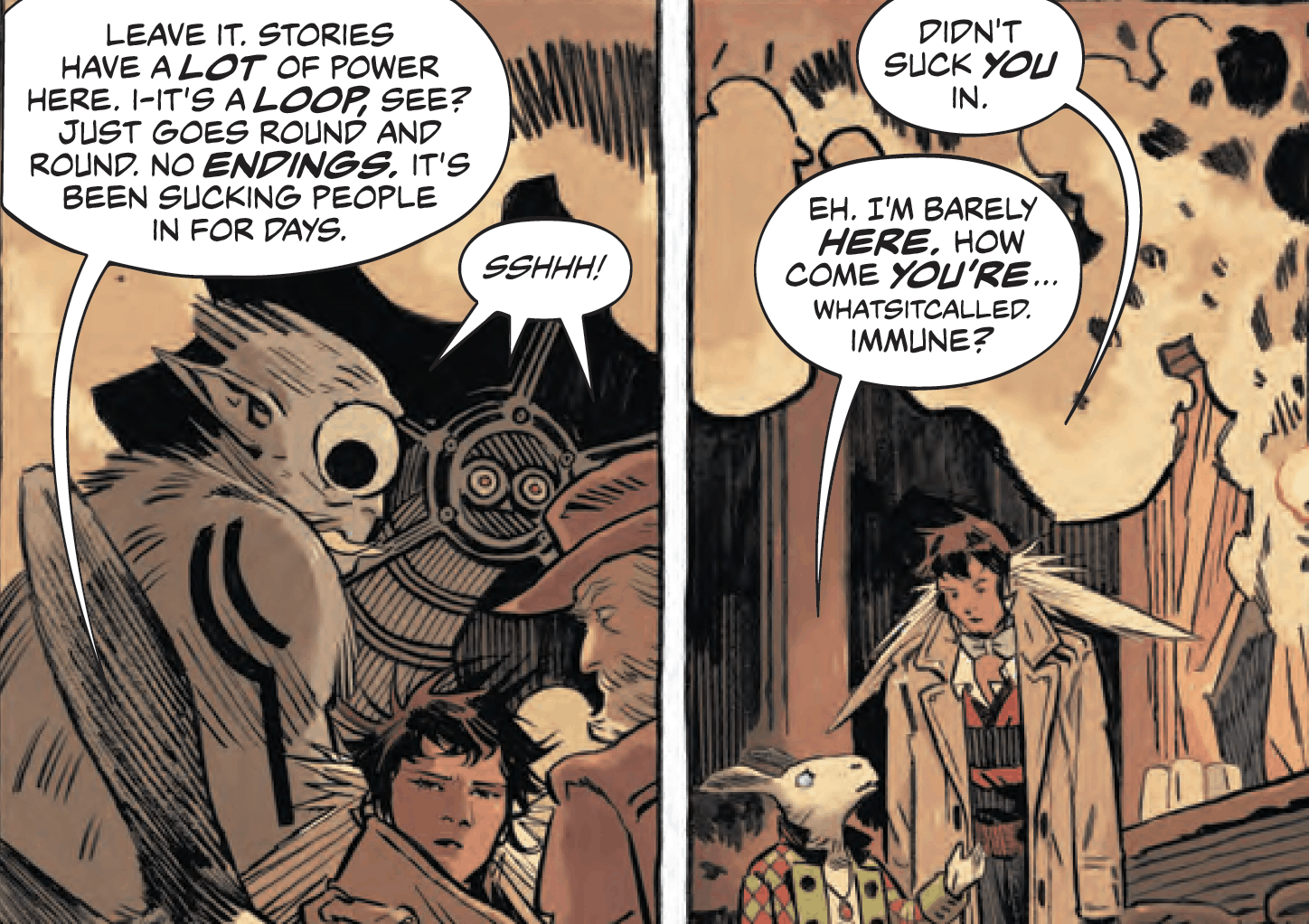 Moved to sudden understanding and inspiration, Dora and Lugs interrupt the tale of the Ur-Gods by finishing the story of finite understanding of an infinite world, breaking the spell. The narrators flee pursued by Dora and Matthew pursue the narrators and manage to capture one, who looks all too familiar. 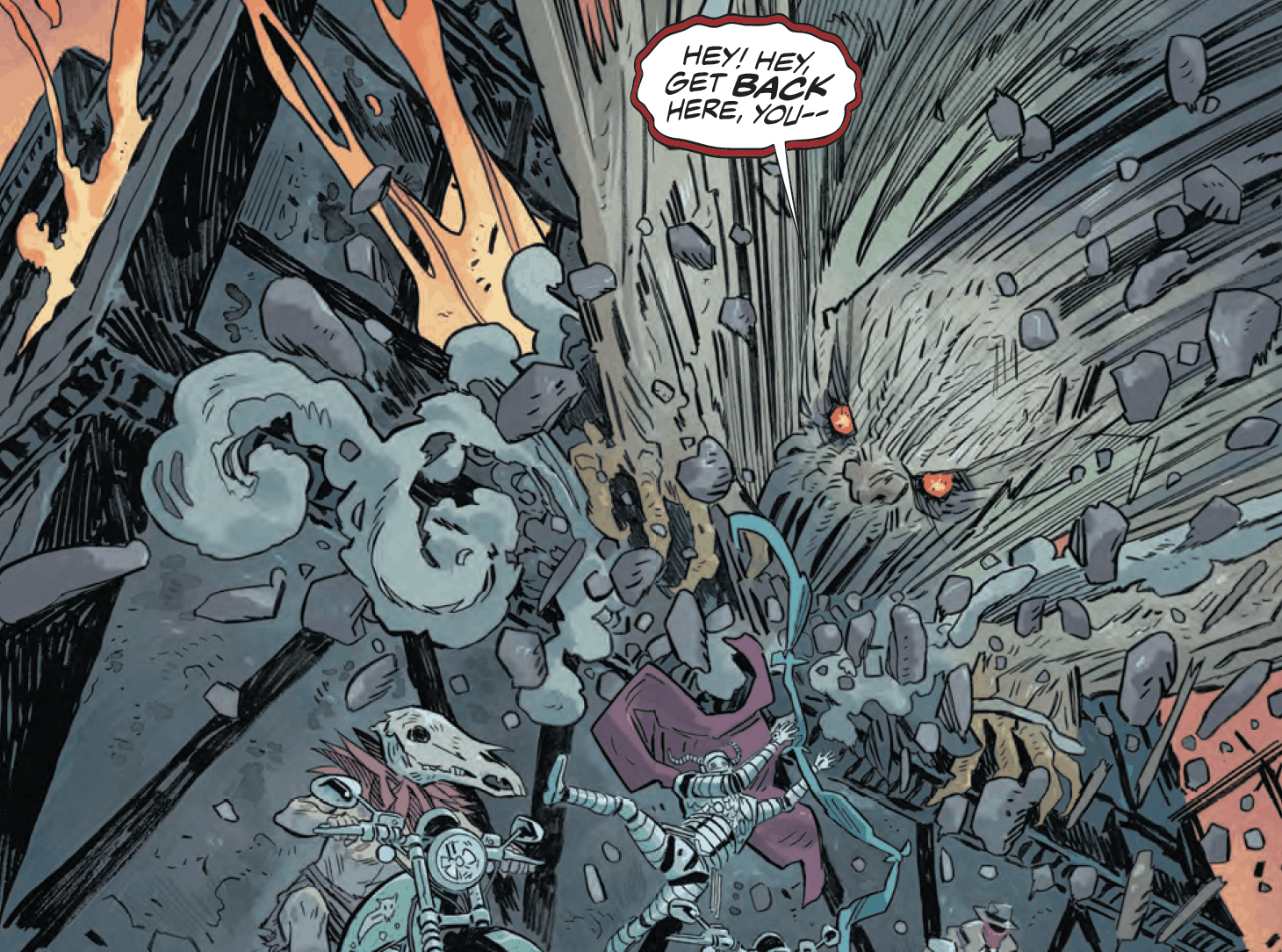 This was a skillfully told tale, neatly and seamlessly moving between the chronicles of the Ur-Gods and the happenings in the Worlds’ End Inn. The story of the Ur-Gods itself, was, by contrast, exceedingly odd and jarring, juggling the reader between several tales ranging from the mythic, to the prosaic, to the fantastic with hardly any transition to cushion the flips. In the end we discover this was by the writer’s design, and fits perfectly with the themes explored in this issue and throughout the series: 1. Understanding comes only when information is placed in the proper shape, fluid and multifaceted as it may be. 2. Beginnings need endings are intricately connected, flowing from one to the other. 3. But, grasping the infinite is only possible for finite beings when tales are parsed into tidy packages.

In this tale we get to see a little more of Dora’s softer side, as she gives sympathy to the sad and lonely Long Lugs. Having recently questioned her own reality, she seems to be the perfect shoulder for a fading god to give into and cry on. Instead she inspires Lugs to one last act of heroism which saves the day. Sadly, by the end of the story even Dora has forgotten Lugs ever existed.

Several questions remain. Why did the narrators set fire to the inn and distract the occupants? Are they independent agents, or working for someone else? If so, who? Who are the two other narrators and how is it possible that Dora and Matthew know one of them?