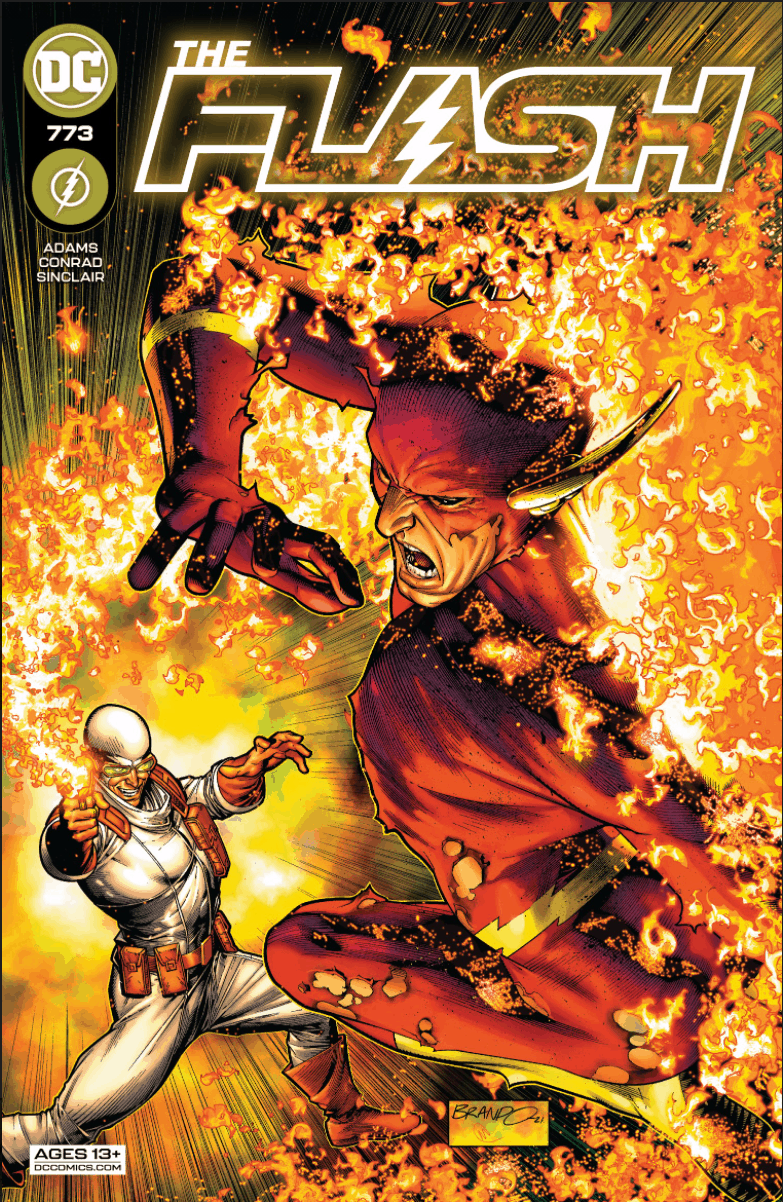 Heatwave has been given a medical death sentence... and is determined to go out on his own terms. But are his motives as clean-cut as they appear? PLUS: Wally West's first full day on the job at Holt Technologies is far from smooth... somebody call HR, there's a guy running in the halls!

The Flash #773 is a pretty straightforward affair, but fulfilling nonetheless. Last issue, Heatwave was given some pretty heavy news: he’s dying of untreatable cancer.  This month, he’s seemingly on a rampage that the Flash must stop. Pretty simple, right? Sure, but that’s beside the point. Writer Jeremy Adams and artist Will Conrad may pad the actual fight between the two out a bit, giving the issue something of a fluffed feeling, but the fight itself isn’t what matters here. Instead, Adams cannily focuses on Wally West’s more personal response to Mick’s anguish, looking deeper at why he’s lashing out, rather than just punching him in the head and throwing him in jail. In doing so, Adams not only highlights a key difference between Wally and Barry (the latter would have likely settled for just sending the “bad guy” to jail in this scenario) and their respective approaches to heroism.

That empathy is key to what distinguishes Wally West from many of his peers. Way back when Barry first returned, Captain Cold admonished the new Trickster for thinking that Barry operated the same as Wally: to paraphrase, “You don’t know what’s about to happen. The original guy plays by different rules.” The distinction was simple: Wally cared about helping the Rogues become better people and saw the good in them no matter what; Barry is an enforcer of the law. The difference is not unlike comparing a social worker to a police officer, and is major: one wants to help, the other wants to maintain order. Without necessarily digressing too far into the defund the police debate, it’s hard not to view this core difference between how the two Flashes operate through that lens.

And maybe that was Adams’ point all along in framing this Heatwave two-parter in these terms, or maybe it was a happy accident. Either way, Adams inadvertently crafted a tale that’s a microcosm for one of the most pressing issues of our time.

That’s not to say this was a perfect issue: like I said, the fight scene itself feels unnecessarily padded out, especially considering Wally could have easily just run up and thumped Heatwave into unconsciousness with ease. (Sidebar: this is true of basically any fight the Flash has with almost anybody, so would be a caveat to any fight he’s in. Less talkin’, more punchin’, man!) Alternatively, it actually could have used more of the come-to-Jesus talk that wrapped Wally and Mick’s confrontation up; I’d like to have seen Wally take more time to invest in Mick’s mental health and general well-being – especially considering how his care and compassion stands in such start contrast to where Heatwave ends up at the end of the issue, which feels like less of a conclusion and more of a set-up for another book. Ah, well – sometimes, editorial mandates can’t be avoided. C’est la vie.

The other half of the issue is devoted to Wally acclimating to his new “gearhead” role at Holt Technologies, and getting used to having a job again. Honestly, this is possibly the least interesting aspect of Wally’s new reality – having a job just handed to him, unearned, by Mr. Terrific just feels too easy. It would have been far more interesting if Adams had maintained the course he started last issue by keeping Wally as an auto mechanic, which would have lent him much more blue-collar credibility and relatability. Wally’s three scientist coworkers have yet to really shine, either, beyond broad archetypes. The whole scenario is simply too convenient.

Will Conrad’s art gets the job done, and follows in the capable footsteps of other recent artists on this title. There’s a certain DC house style sensibility to it (owing a fair bit to Ivan Reis for comparison), but it certainly gets the job done. Conrad’s Flash isn’t overly-muscled, having in common physically with an Olympic track star than Superman. But he also knows how to slow it down and convey real emotion, too: Heatwave’s eventual resignation to his fate – and more importantly, how he’s feeling about it – has a real power to it. Alongside industry stalwarts Alex Sinclair and Steve Wands, Flash is a mighty fine-looking book on all fronts. With Wally’s official return to the role of the Flash, readers couldn’t ask for a better time to jump into this book.

The Flash #773 pads out the action a bit but really hits a home run with its emotional beats. This is the best time to be a Flash fan in over a decade!