The Flash #777: Vengeance is Mine, Sayeth the Lord 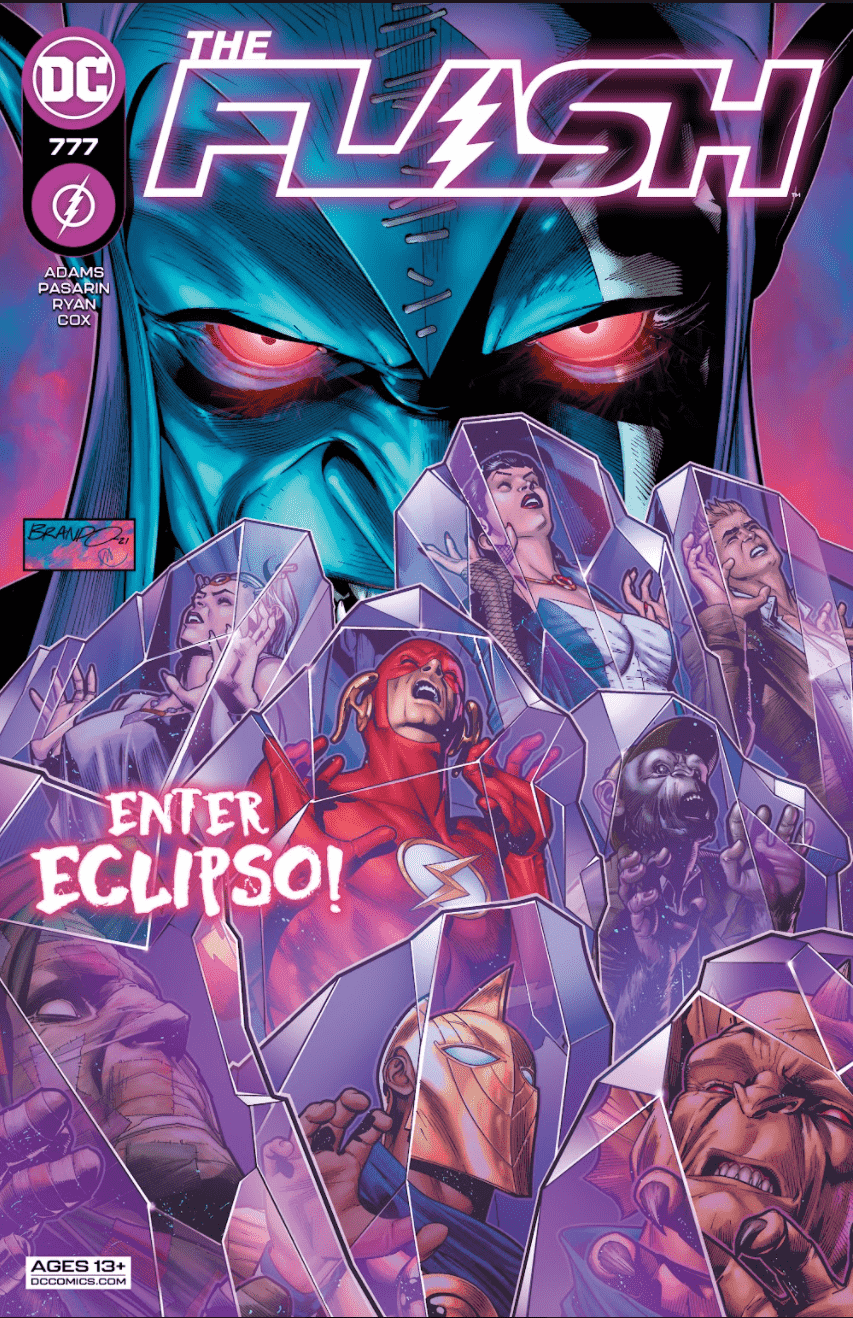 The Flash is in Gemworld, hanging out with Justice League Dark and trying to figure out how to stop Eclipso from doing... y'know, bad guy stuff.

Meanwhile, Wally's son Jai gets a little time in the spotlight!

Flash #777 might go down as the weirdest-to-swallow issue of Jeremy Adams’ otherwise-pristine run to date. It isn’t a bad comic, but it’s caught in an awkward spot: part three of the so-called Glaive Saga, it has no real beginning or end, being an intermediary chapter. The plot definitely moves forward, though, so as a means of moving the story forward, it absolutely does what it’s supposed to. But the downside to being stuck in the middle (with you) is that as an individual read, it’s a tad unfulfilling.

Fortunately, though, Adams balances the Flash’s misadventures in Gemworld out with some much-needed insight into son Jai West’s world. Since Wally reclaimed the spotlight, Jai has languished in the background (along with his mother, Linda, unfortunately), cast in the shadow of his twin sister Irey – who is now the only one of them to have superpowers. (For the why of that, check out 2009’s Flash: Rebirth.) Jai has to figure out how to thrive when his sister gets the lion’s share of the attention, so it’s a bit more challenging for a writer to flesh him out without the go-to assistance of a handy-dandy super power to rely on. That means Jai just gets to be a kid being a kid… and the results are fine, I guess. At this point, Jai hasn’t really exhibited anything personality-wise that sets him apart from any number of other kid characters in fiction. He’s not a bad character, just under-developed. Adams is definitely working an angle, though – this issue’s cliffhanger points toward a young man getting a chance to shine next issue.

I’m not sure what if any juxtaposition Adams intended by contrasting Wally’s adventure against Jai’s, but any parallels between them are surface-level at best. Wally has an adventure, Jai has an adventure. I suppose a conclusion could be drawn that Adams is illustrating that Jai is more like his dad than he realizes even without superpowers, but that feels thin at best and as I alluded to at the beginning of this review, just weirdly placed. Why bring the Jai/Wally parallel stories in now, midway through the current Glaive arc? Jai’s tale could have fit so much better as a stand-alone or two-parter independent of this Eclipso story; that way the focus could have been much more squarely on him.

The Justice League Dark is under-utilized, too: they seem to be there because the story involves magic, and contribute little else. There’s also no connective tissue whatsoever to Ram V’s recently-concluded JLD story, which seems odd since that story’s deliberate cliffhanger alluded to some mighty changes for DC’s magic corner in the near-future. Here, the JLD mostly just stands around, although credit where credit is due, there’s a WONDERFULLY creepy sequence partway through the issue involving the team being subtly possessed by Eclipso. Beyond that, though, they more or less just lend exposition while Wally lends a scientific perspective to untangling Eclipso’s schemes.

Fernando Pasarin, Matt Ryan, and Jeromy Cox’s art is a delight as always. I do wish Ryan’s inks were a little less heavy – they tend to weigh the Flash down where he should look and feel light as a feather – but they’re still good, regardless. Gemworld and its more monstrous inhabitants give the trio an absolute smorgasbord of cool, highly-detailed and heavily whacked-out alien critters and landscapes to go absolutely hog wild with. Regardless of any odd ways the story lands, no one could argue that this month’s Flash isn’t one of DC’s best damn looking comics around.

The story falters a bit this month, as Jeremy Adams tries to balance a bit too much and winds up with one subplot that feels oddly placed and another that feels underdeveloped. A rare misstep for this Flash renaissance, but still definitely a comic worth putting on your pull list.

The Flash #777: Vengeance is Mine, Sayeth the Lord