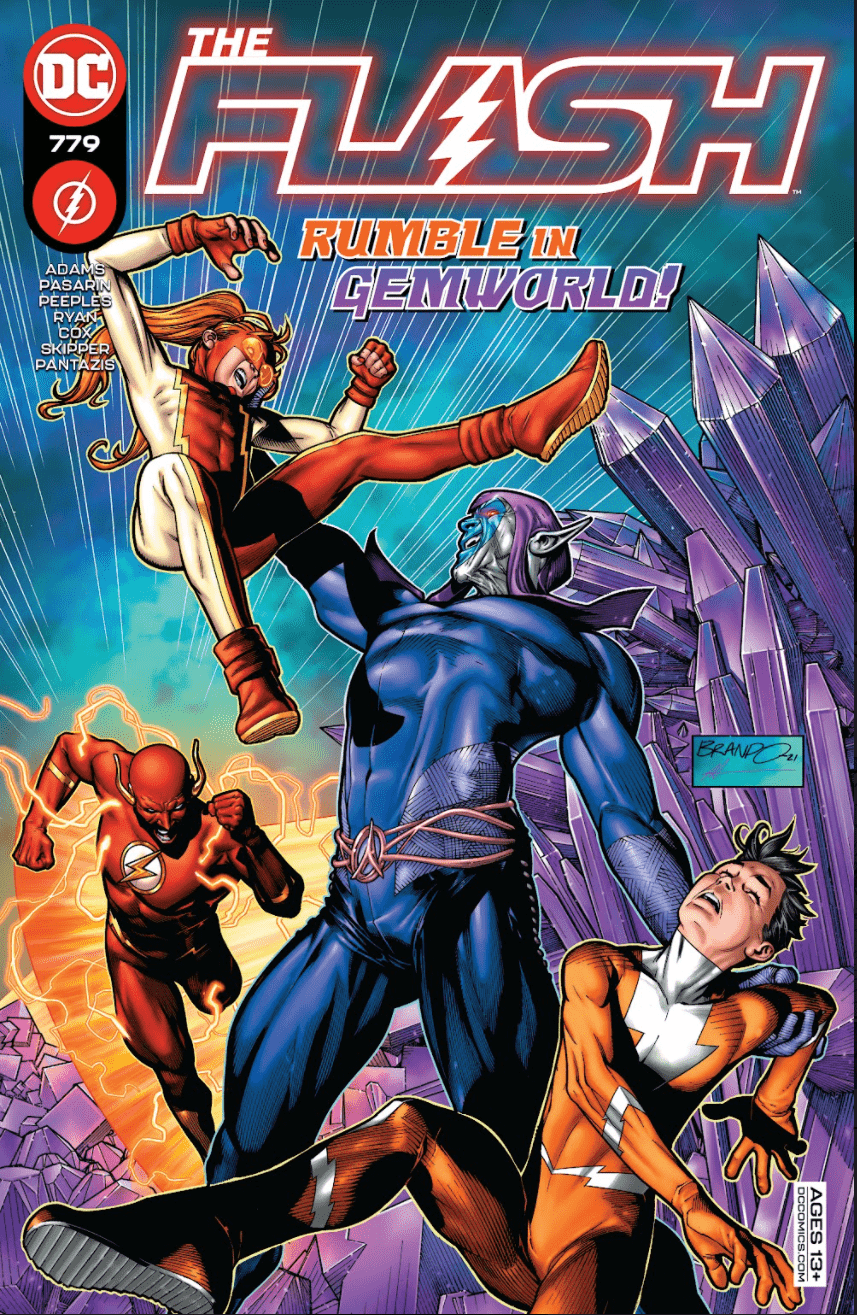 Eclipso - in control of Gemworld, and about to exert his influence over all the Earth!

The Flash - trapped! His kids - to the rescue?!

The Flash #779 goes a long way to prove that even when a story doesn’t quite feel like it’s going to work out, it can still stick the landing in the end. “Vengeance is Mine!” has felt like an off-kilter endeavor for Mr. Wally West since its inception; the Justice League Dark, Gemworld, Eclipso, and Jai and Irey (plus friend, more on her later) all felt like pieces of a puzzle that weren’t adding up. It didn’t help that, in a magic-based story, Flash just feels out of his element – even if that’s the point. But here at the grand finale, writer Jeremy Adams proves that he had a plan all along.

That plan is less dependent on speed than it is West family dynamics – something that, while front and center during Adams’ time on this title, hasn’t quite played out in this dramatic a fashion. And that’s the trick here, the rabbit out of the hat that couldn’t be revealed until the end: “Vengeance is Mine!” is an unusual Flash yarn in that it isn’t about a problem that can be solved by virtue of running fast. It’s about that Flash Family, something that has long been of major importance to the character but has been largely neglected in the years since the New 52 swept aside everything readers had come to love about the Speedster corner of the DCU and replaced it with The World According to Barry Allen.

So to recap: Jeremy Adams knew what he was doing all along. Sometimes, we reviewers have to eat a little crow. But it’s bittersweet, because that means our assumptions were wrong – but it also means there’s been a pleasant surprise. And that’s exactly what Flash #779 is chock-full of, right down to Irey’s friend Maxine’s major paternal bombshell (at exactly the right moment, no less) to successfully resolving the long-standing loss of Jai’s powers (sorry, Geoff Johns, but you did that kid dirty when all the power went to his sister instead of being shared), to a jaw-dropper of a cliffhanger on the last page that could be a fun one-off but could also change everything for the Wests. The bottom line is, and I’ve said this to death since the inception of Adams’ run: DAMN, it’s a great time to be a Flash reader.

The art side is where this issue gets tricky, though. Although the Gemworld tale comes to a strikingly awesome end, the story – rendered by a penciller, an inker, a pencils-and-ink combo, and three colorists – not to mention the cover by Brandon Peterson, who cannot be counted as one of the interior artists – is inherently incoherent. That’s not the fault of any artist involved, because Fernando Pasarin, Matt Ryan, Brent Peeples, Jeremiah Skipper, Peter Pantazis, and Jeromy Cox (whew!) all shine in their respective parts. Particularly, the “count to ten” double-splash is a thing of absolute beauty, and there are little moments of genuine humanity sprinkled throughout. But the constant rotation of artists means incongruity is the name of the game from start to finish, which hampers the story’s overall natural storytelling flow. Again, it’s not the fault of any of the artists. It’s the editorial decree that rendered the division of labor between the artists, meaning none of them got a particular chance to shine throughout the entire issue, which isn’t fair to any of them. The artistic inconsistency even seems to have gotten the better of veteran letterer Rob Leigh: there was more than one instance while reading that I had trouble following the intended balloon placement, which is an incredibly uncommon occurrence, both for me as a reader but also for Leigh as a letterer. It can’t help but be noticed that it adds to the overall feeling that on the art side of things, Flash #779 wound up being a bit of a piecemeal rush job. Which is truly unfortunate, because Jeremy Adams’ script hit a total home run.

Flash #779 brings the Eclipso saga to a close with a wonderful rediscovery of what makes the West family so special! So why is the art so incongruent? I feel like DC really shortchanged somebody here, whether it's the artists who should have deserved a shot (and undoubtedly a paycheck) for crafting the entire issue, or readers, who got a wonderful script that was dragged down because of the art-by-committee approach. It's hard to be mad at any of the artists themselves, though, because taken as individual parts, each artist's contribution is wildly successful. It's only when viewed from the 30,000-foot perspective that the bumps in the visual road are perceived.