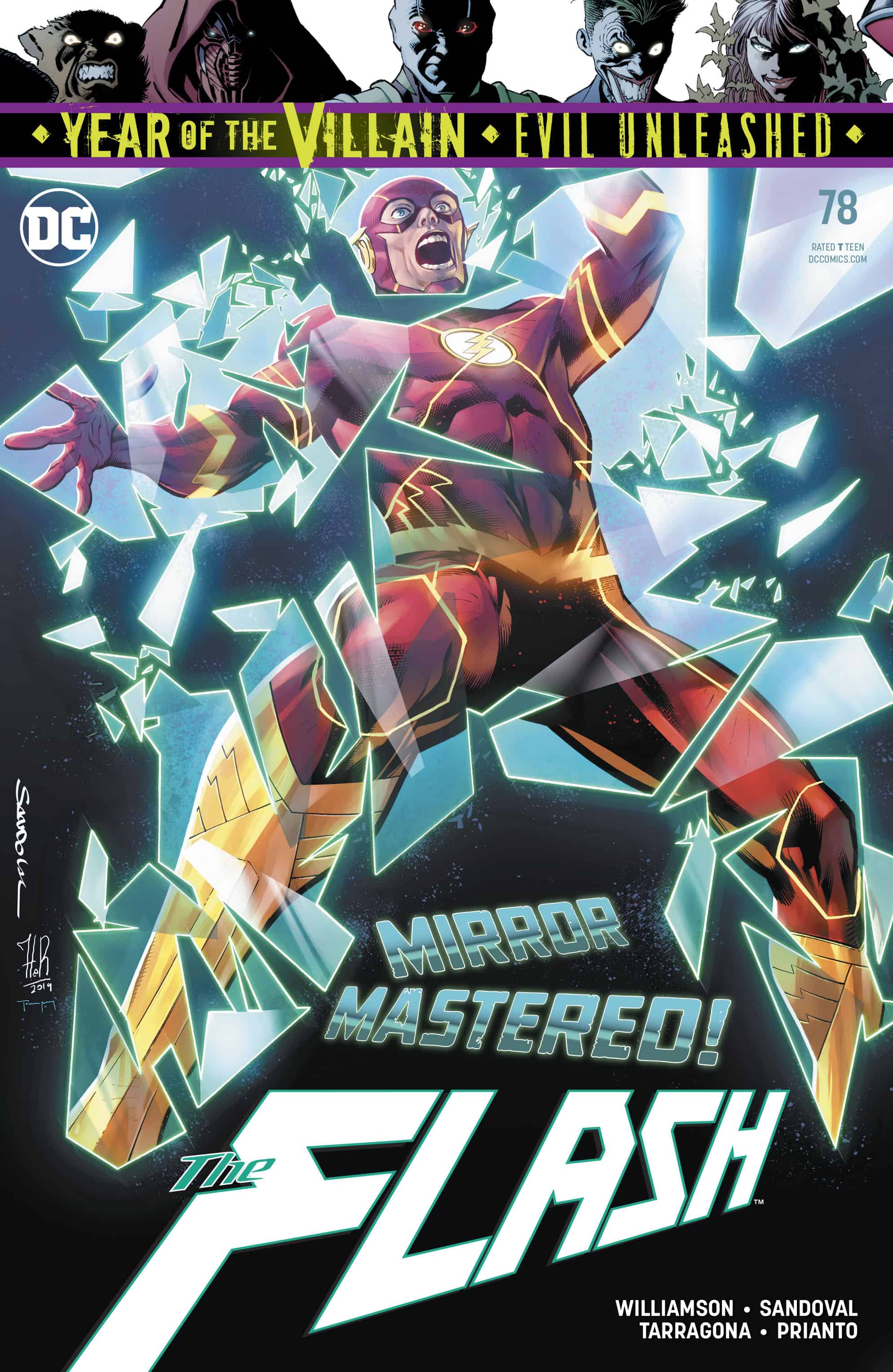 Sage Force wielder Psyche isn't about to die at the hands of the Black Flash - but that doesn't mean he's going to play well with others, either! 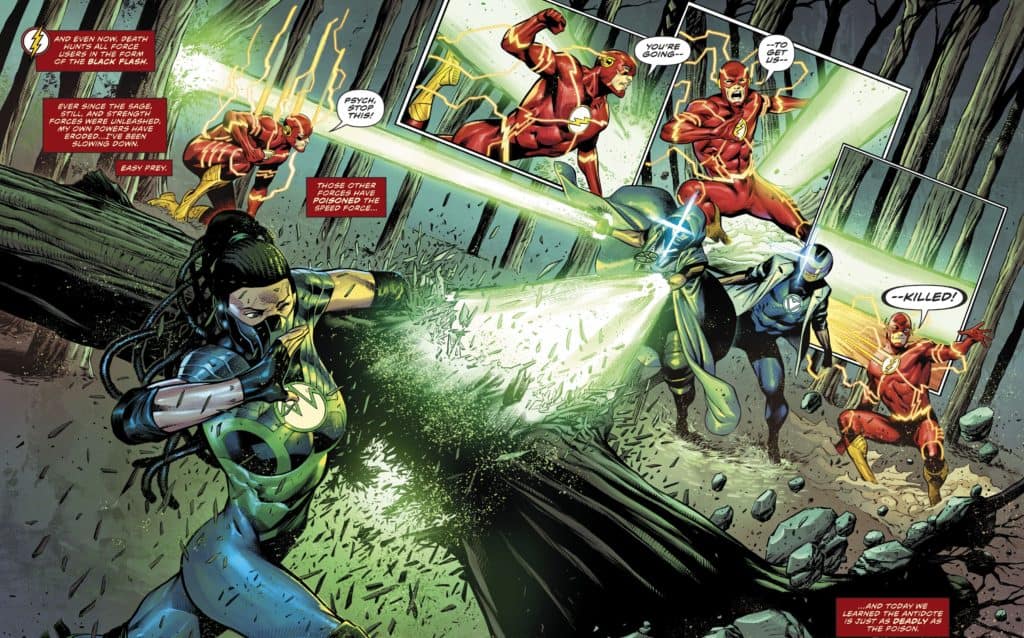 The Flash defuses the situation by causing a sort of feedback loops that incapacitates Psyche - but that doesn't necessarily stop him from getting away. 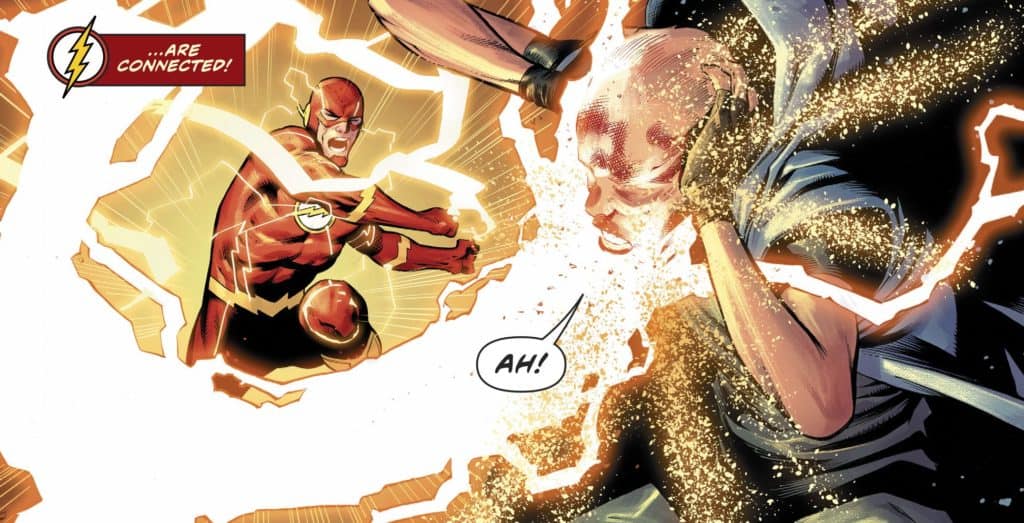 It won't be enough to just stop the Black Flash - the Speed Force is going to continue to weaken until it fully dissipates... unless the other forces' wielders are completely gone from Earth. That means, regardless of how much of a terrible human being he is, Psyche must be found for his own good - before the Black Flash catches up to him! But Flash has a plan... 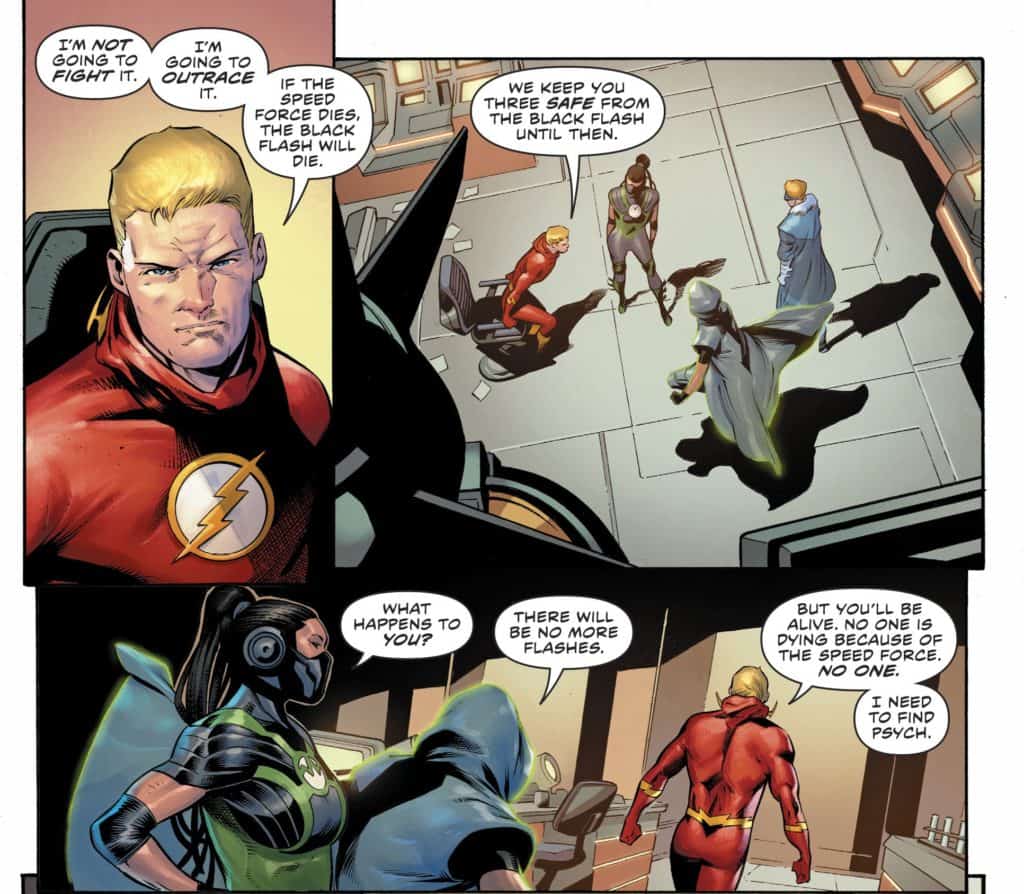 Okay, it's not much of a plan.

The race is on to find Psyche before the Speed Force's avatar of death, the Black Flash, catches up to Psyche and ends him forever! But can even the Flash outrace... DEATH? 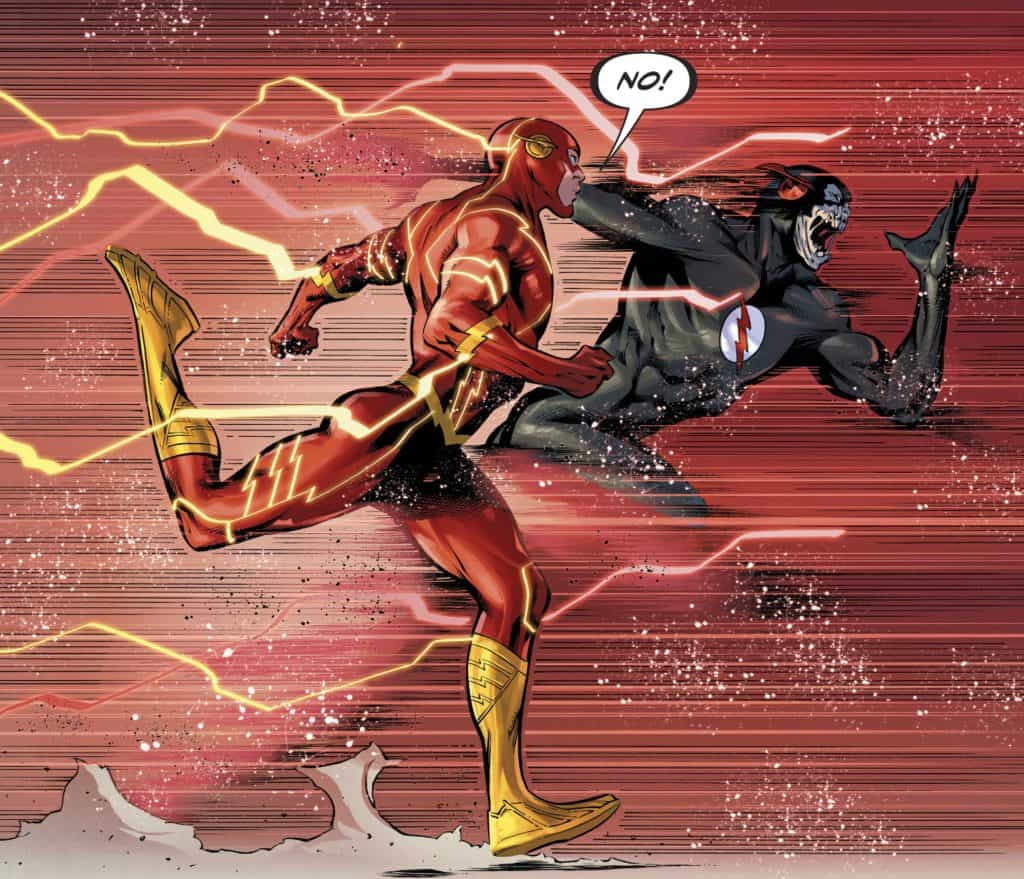 Meanwhile... Captain Cold, Heatwave, and Weather Wizard catch up to Mirror Master in their quest to reconstitute the Rogues now that they've all been leveled-up by Lex Luthor and his insidious offer! But does Mirror Master want to play the game? Or is he too busy living large?

To say the events that conclude Flash #78 are tragic, or less than predictable, would be a lie. But, to cut to the chase – nope, there’s no outrunning the Black Flash. Especially if you’re Psyche, a character who, in a very short amount of time, has cornered the market in obnoxiousness and thoroughly complete weasel-ness. It was annoying at first, and given that his entire schtick was to be untrustworthy and that last issue the Flash fell for it yet again like a total moron – well, let’s just say that I won’t be shedding any tears for his skeletonized demise at the hands of the Black Flash. Credit where credit is due, though: going out of his way to save this guy is exactly what Barry Allen should do. It’s a move that’s in line with our very understanding of his character’s moral fiber. He’s a hero. That’s what heroes do: save the villain, even if the villain has done absolutely nothing to earn that kind of salvation.

Bonus – the desperate traintop race to beat the Black Flash to Psyche is expertly thrilling. Kudos to Rafa Sandoval for delivering such a breakneck sequence, and my hat is off to writer Josh Williamson for concocting it. It may be a well-worn trope, but few things amp up the stakes in an action sequence than putting it atop a moving locomotive!

It’s unfortunate, then, that the road to get to this genuinely well-executed (though again, not particularly shocking) plays out so much more rote. Picking up where last issue left off, as if by magic – Psyche has betrayed everybody! We certainly didn’t see that coming, not since during every other appearance of this villain he has done the exact same thing! Boo, no way! Way. So it goes. It’s also worth noting that I don’t really think Williamson had much in mind for an actual plan for Barry to overcome/outrace the Black Flash, since his “plan” is so half-assed. Rather than risk Sage and Fuerza’s lives going up against the demonic speedster, he instead tricks them (with a little help from Commander Cold), shackles them up, and then runs out to confront Black Flash on his own. Sure, he didn’t want to put them in harm’s way since they’re targets too, but… they could have helped! For that matter, any other DC hero could have helped, too. It’s not like this guy’s in the Justice League or anything… (Although, if you wanted to, you could apply this line of logic to every single superhero comic ever, and that’s a pretty deep rabbit hole indeed. Best to let that one rest.)

Despite some trite storytelling, Flash #78 was a pretty fun issue. I could easily dispense with the B-story featuring the Rogues very… very… very slowly getting back together, as it’s repetitive and about as interesting as watching paint dry (and moves at a similar pace). The issue’s climactic sequence lands its action beats with a metric ton of skill, and the final page has a strong bit of schadenfreude to it that I predict quite a few readers will actually enjoy.

Flash #78 continues to rocket "Death and the Speed Force" forward, turning a corner and upping the stakes in a big way.