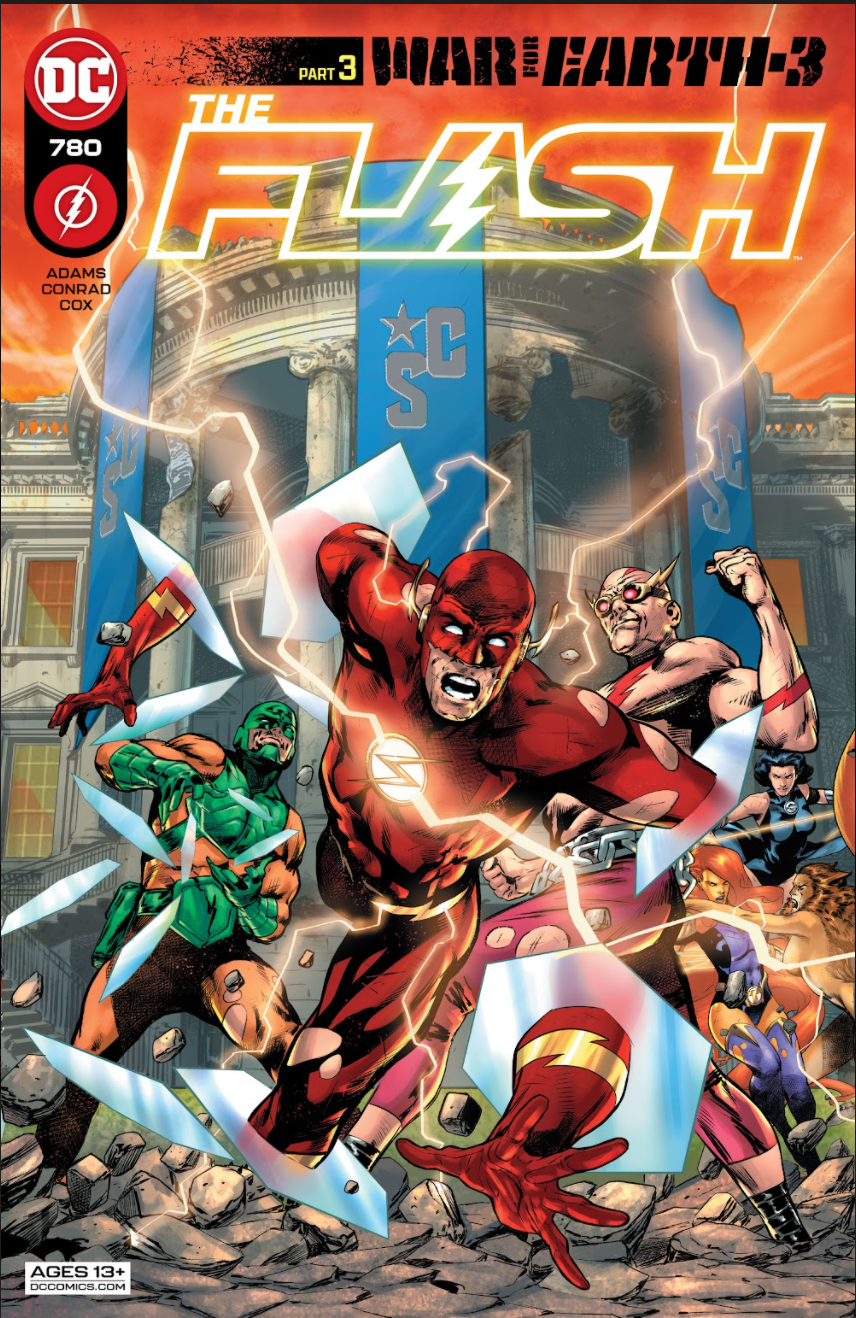 Things are bad. Amanda Waller has struck a deal with Ultraman on Earth-3, and has her sights on taking over... meanwhile, Rick Flag's counter-Task Force X team has gotten the snot beat out of them eight ways to Sunday! This isn't just war, it's WAR FOR EARTH-3!!

Flash #780 does a nifty balancing act of serving as an epilogue for the recently-concluded “Vengeance is Mine!” arc as well as threading into “War for Earth-3.” This shouldn’t feel anywhere near as even-handed as it does, but in the hands of writer Jeremy Adams, Wally West’s world continues to spin like a top. (No, not the Top.)

Picking up right where last issue left off – Linda West has somehow developed super-speed! Linda has been relegated to the background since the beginning of Adams’ run, but at last, takes center stage. And what a spotlight it is! Suddenly thrust into the business end of her husband’s super-career, Linda is naturally bewildered – yet also calm and collected, as befits the strength of her character. (Lest we forget: she was once absolutely willing to throw down solo with Kobra to save her man back in “Terminal Velocity.”)

So, Linda West: badass, but also kick-ass journalist, mother, and partner, is at last being given a chance to shine for a new generation. Hear, hear.

The other half of the yarn focuses on Earth-3’s Johnny Quick (of the Crime Syndicate, naturally!) attempting to steal the Cosmic Treadmill for Amanda Waller for reasons unknown. Wally versus Johnny honestly wouldn’t amount to much under normal circumstances – but throw a wrench like Mirror Master into the mix, and well, things get a bit more dicey. And that is how Wally West joins the War for Earth-3.

“War for Earth-3” has been an outstandingly-executed romp so far, and its third chapter here is no different. Throwing an x-factor character smack dab into the middle of a crossover is usually a recipe for excess and bloat, but in Adams’ deft hands, the addition feels utterly natural. The man is a wealth of talent, and is absolutely poised to be a huge star. Let’s hope he stays on Flash for a good, long time despite that, though.

Will Conrad is on pencils and inks this month, and he brings his A-game. Even a rotating trio of colorists doesn’t change that (and for what it’s worth, it’s an utterly seamless transition between Cox, Pantazis, and Herms). Conrad, though, is the star – born of the Ivan Reis style of art, with dynamic, bold linework and a thoroughly powerful inkline. Conrad has been around for a good, long while, and has a distinguished career behind him – but if his work here is any indication, he’s just getting warmed up.

Flash #780 is another stellar, near-flawless entry for Jeremy Adams' run. Don't sit on the sidelines: this is absolutely the best Flash run in two decades.