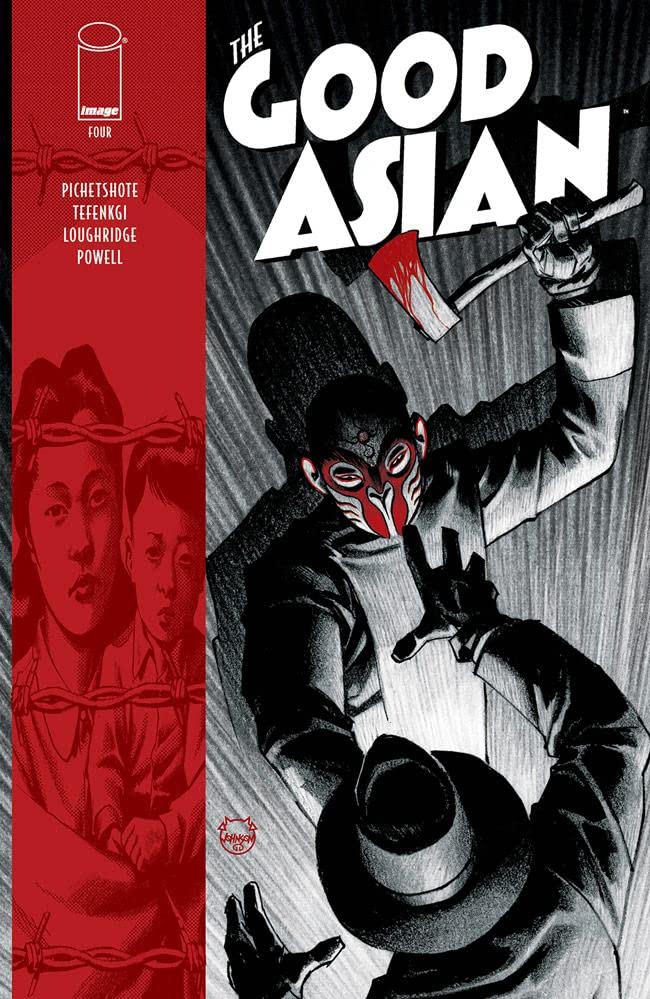 There's far, far too much story for me to possibly do it justice with a synopsis, so here: 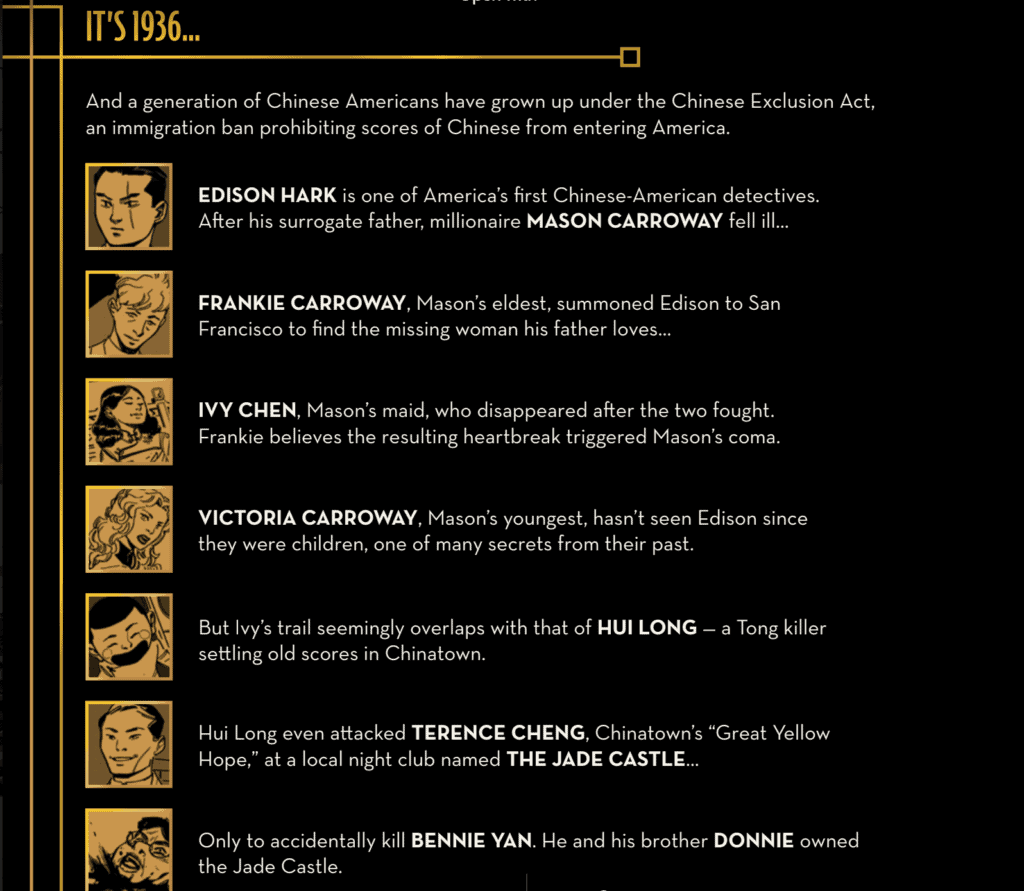 Got all that? The mystery continues to unfold...

At the risk of sounding pretentious and/or blandly predictable, The Good Asian is the comic we need right now.

America has grappled with COVID-19 and a previous president who not only denied and downplayed its existence for months, but then finally settled on scapegoating the Chinese people for it. Many, far too eager to point fingers rather than accept reality or do a simple thing such as wear a mask or get vaccinated, decided to take their frustrations out on AAPI citizens, instead. According to stopaapihate.org, reported hate crimes against Asian Americans have risen from 3,795 to 6,603 this past March alone, with the true numbers doubtlessly being much higher due to unreported crimes. People are scared, people are frustrated, people are ignorant and bigoted, and are looking for an easy target to blame the inconvenience of having to wear a mask on because of the “kung flu.” It is an incredibly frightening time for Asian Americans.

It is into this context that The Good Asian was born.

Creator and writer Pornsek Pichetshote has taken many of the tropes and building-block DNA of the crime noir genre and injected them into 1936 Chinatown in San Francisco, where Detective Edison Hark – one of America’s first Asian policemen (and a detective, no less) – is searching for the missing Ivy Chen, great love of his now-deceased adoptive father’s life. There are shadows, secrets, conspiracies, sex, and much larger plots to unravel – and, of course, murder. All of the ingredients necessary for a great crime drama, Pichetshote brings to the table, and relishes with aplomb. Four issues in, and The Good Asian is a damn good mystery in its own right – owing more to Raymond Chandler than to Mickey Spillane (though crucially adept at bringing the [Mike] hammer down as necessary for maximum impact) – and, devoid of any greater historical or current zeitgeist context, wouldn’t be out of place in the Ed Brubaker/Sean Phillips oeuvre.

But, that isn’t the case. Pichetshote had already set about the task of writing The Good Asian well before the current pandemic had begun, delving into months of rabbit-hole research of not only the Chinatown of the 1930s, but also, America’s own long, sordid, and often swept under the rug history with official, government-sanctioned and institutionalized racism against Asian Americans – specifically, the Chinese. (If you don’t believe me, read the author’s extensive backmatter pages each issue. You’ll learn a few hair-raising things you weren’t taught in school.) The current wave of AAPI hate is nothing new for the country that is supposedly a proud melting pot that was built by immigrants – but rather, the latest chapter in a disturbing legacy that stretches back over 150 years.

Artist Alexandre Tefengki and legendary colorist Lee Loughridge bring an immaculate sense of design to the proceedings, knowing exactly how to contrast shadows and light but also use a design sense – not on every page in an overly-showy way, but only as necessary – to imaginatively craft the world they’ve brought to life each issue: 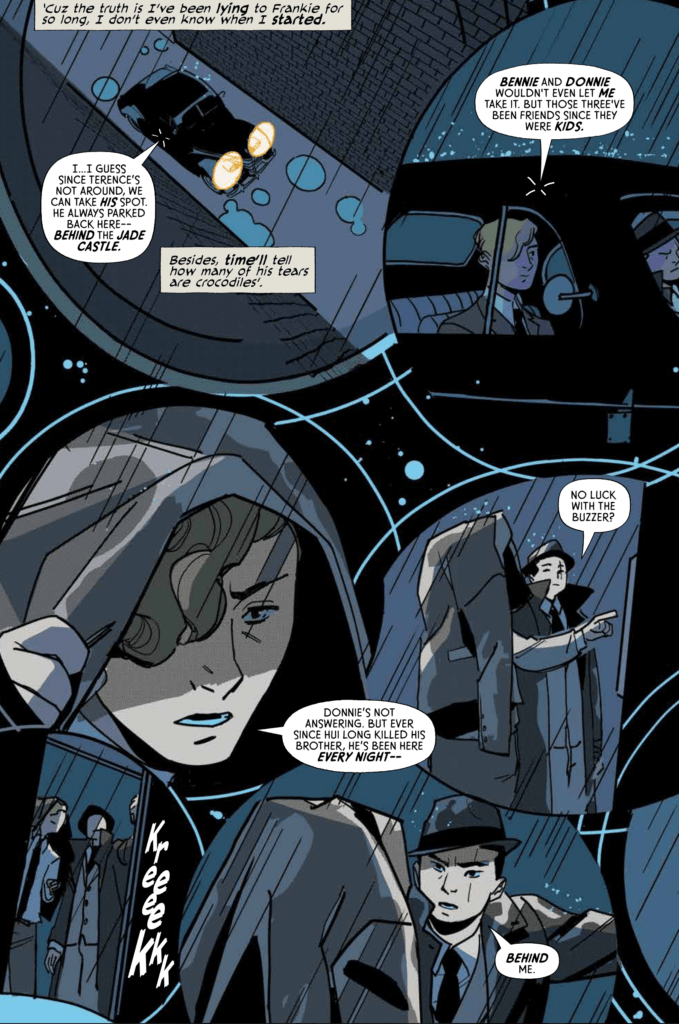 LIke true masters of the craft, Tefengki and Loughridge’s creative use of paneling works to unify the page as a whole while exuding the intended mood and bringing the entire page together as one cohesive work of art.

Letterer Jeff Powell, in turn, ties everything together with his expertly-placed dialogue and narrative text. Powell’s placement enhances the story flow in a way that cannot be understated but is all too often overlooked in letterers’ work.

The Good Asian #4 successfully moves the narrative football forward another set of downs. It’s impossible to read this comic and feel like nothing happened, or that the issue might have been overly decompressed. It ends with a wild shock – and like all good crime fiction, communicates with maximum effectiveness that nobody is safe. It leaves you feeling unsettled after you set it down – and also serves as a sobering reminder that there is peril in the world today. Right now. It’s ugly and it’s nothing new. But it can be faced, and while hate is never truly vanquished, it can be driven back into the dank shadows of the cellar where it belongs. All it takes is a courageous few to stand up and say, “No more.”

If you experience or have witnessed an anti-AAPI hate crime and wish to report it, please contact your local authorities immediately, or reach out to such anti-hate organizations as stopaapihate.org, the ACLU, or napaaba.org. These resources are also available if you would like to donate or learn more about the growing epidemic of hate crime violence.

For an in-depth interview with Pornsak Pichetshote and Alexandre Tefengki regarding The Good Asian, click here.

The Good Asian dares to not only tell a rip-roaring, shadow-drenched old-school crime noir yarn, but also pulls back the covers on America's uncomfortable history with institutionalized AAPI discrimination. This is a comic not to be missed.