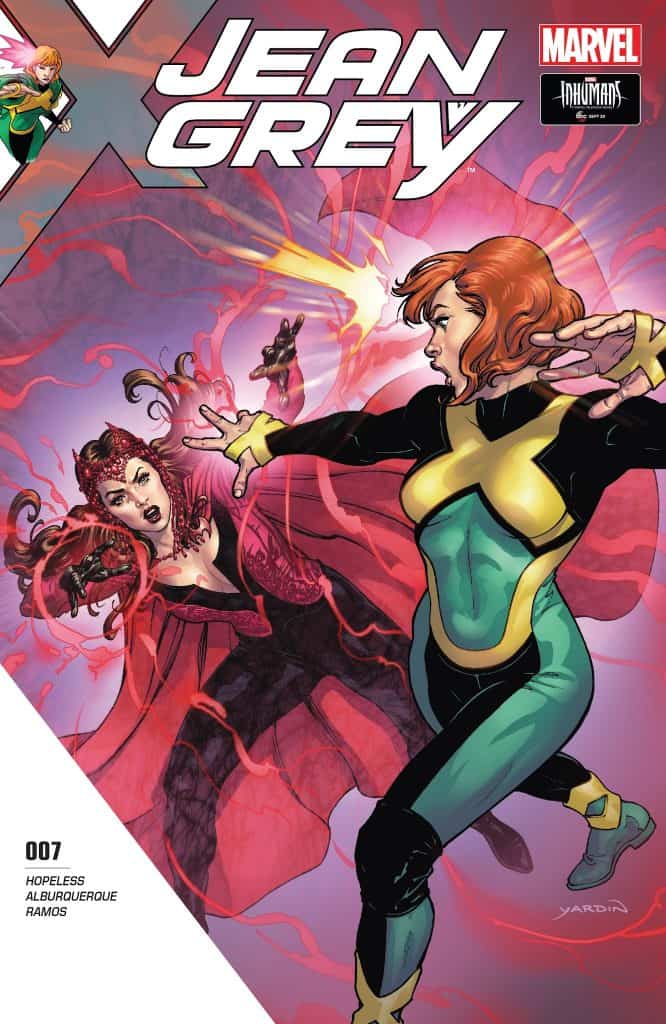 The Phoenix is coming. Jean has met with anyone she can think of who can provide any aid in desperate measures to avoid her fate of fire. Now the ghost of the adult Jean Grey has returned and has some lessons to teach her younger counterpart, whether she likes it or not!

The story of Jean Grey is the definition of fight or flight. Upon arriving from the past, it wasn’t long before providence demanded her to fill a role she never wanted or deserved. The forces that commanded the life and fortune of her adult counterpart have invaded and continue to hound the young girl who, unlike her predecessor does not have the luxury which events unfold naturally. This Jean did not have decades of preparation and life experience which still cost the woman her life. Instead, now only a child, she has been thrust into a desperate search to find a means of survival.

The spirit of Jean Grey has been summoned. Jean’s elder form has finally been able to break through the veil with the assistance of Dr. Strange’s magical séance and Teen Jean’s acceptance that despite how much she wishes otherwise, both she and her senior embodiment are one and the same.

That doesn’t mean that the two will get along. In truth, the teenage Jean finds her older version revolting and has no interest in living up to the memory of the one who came before. Equally as frustrated, the Spirit of Jean Grey (senior) has no patience for the childish self-centered teen. The tension boils over into an argument between the two which onlookers who can’t see the specter surmise that this is one disturbed young woman.

Enter Wanda Maximoff, Marvel’s resident expert in mental instability. The Scarlet Witch removes everyone in the immediate vicinity and offers her good will to Teen Jean. Wanda explains that word spread through the magical community and feels due to her own experience with personal demons she can offer some aid. Despite the elder Jean’s protest, this proposition is too good to pass up.

The witch ushers the young girl through a variety of locations and experiences with specific intention to impress the importance of taking care of oneself first. Though the teenager seems to begin to find both commonality with Wanda and respite from her ongoing turbulent lifestyle, her continued rejection combined with disregarding reaches the limit of her ghost. Elder Jean finally snaps and decides to quite literally take control and possesses the body of her teenage self.

The protests of the girl go ignored. Turnabouts fair play after all. Jean ultimately arrives to her destination, the lavish penthouse of yet another notorious mutant female, none other than Emma Frost. While under total control of Jean’s elder spirit, she goads Frost into engaging her in a conflict. Frost takes the bait and as she abandons her diamond form to utilize her telepathic arsenal, the ghost of Jean Grey jumps again, and takes possession of the White Queen.

The overall story in each issue is primarily compartmentalized in sort of the “guest character of the month,” format. The inclusion of the Scarlet Witch into the greater Phoenix story line is a natural extension given her history with the creature and unique experience during the events of AVX. My expectations were really high for this issue but at the end I felt a little underwhelmed. The Scarlet Witch has been the center of one major Marvel drama after another and commands the attention of any reader whether you’re a fan or not. Wanda really does nothing more other than act like the mutant version of Tony Robbins and portrays the role of a happy life skills coach.

The missed opportunities aren’t limited to Wanda either. By now most mutant fans, (unless you’ve been living under a rock for the past few weeks,) are fully aware that the adult Jean Grey is set to return shortly after the launch of Marvel Legacy, a new direction for the publisher which aims to return long absent heroes, with new stories combined with classic elements. As the teenage Jean Grey will no doubt play an essential role in the resurrection of her adult counterpart, the stories in her solo book have shifted to an interactive setting which both Grey’s have no choice but to work together. Last issue it seemed as though the teenager would finally accept her future self. Not so fast. Perhaps like all teenagers who’s emotions are fully charged with hormones and immaturity, teen Jean goes right back to her vexing confrontational behavior and proceeds to bicker and outright scream at her future self.

At the same time, though Hopeless has utilized great skill in fleshing out the difference in the teenager compared to her adult perspective throughout the series, he doesn’t quite get the adult version’s behavior, personality traits and natural qualities down. Jean Grey’s past embodiment represents strength of character and exemplifies patience, understanding, and a fierce threat to anyone who means harm to those precious to her. However here Hopeless omits those key character elements and though the spirit version of Jean is understandably impatient, knowing full well what to do and what’s to come, apparently she didn’t get enough rest in that white hot room. Instead she acts nearly as immature as her youthful partner and totally out of character. Though I’m a huge fan of breaking the old Jean Grey archetypes and cliches, the constant squabbling really began to run thin in just this one issue and I hope that Hopeless doesn’t intend to make contention between the pair a focal point of their continued relationship for the duration of the story. I can see that Hopeless aims for moments of humor specifically when adult Jean is subjected to the entire personification of the mess that has become the lot of the Scarlet Witch and her teenage version, but falls short as it produces awkward reception and is just too adolescent for my taste. Basically we’re left with Teen Jean and Mean Jean.

The story gets no aid from an illustrative perspective either. Alberto Jimenez Alburquerque’s skill is more of a hindrance to an already weak installment. I do not care for his work and have seen pre-professionals on social media who are more deserving of their work being produced over this. This is exactly what Marvel fans talk about when they lament that Marvel’s artists are not as strong as those employed by rival publisher, DC comics, I wholeheartedly agree. It reminded me of animation from the Magic School Bus. If you’re between 3 to 5 years old, I’m sure you’ll enjoy it.

I felt that the story and subsequent dialog overall just too juvenile than I would have liked given the seriousness of the antagonist looming in the background who, before we know it, will arrive very soon and undoubtedly have major ramifications for the X-Men titles and the greater Marvel universe. The issue is decent enough, don’t get me wrong, it just could have been so much more.

Final Thought: Compared to the issues that have come before, the seventh issue of Jean Grey’s solo series is by far and wide the weakest as the conceptualization of the story, dialog, and art, are the perfect trifecta of cloying over the top antics, melodrama, and failed humor that falls flat. With respect to the strong delivery of Hopeless so far, I hope this was simply a stumble. You know the ones we all have where we try to recover and play it off while everyone else pretends they didn’t see it? I’m choosing to look the other way. Just this once.