The Invincible Red Sonja #4: Always Unmask Your Foe Before Claiming the Reward 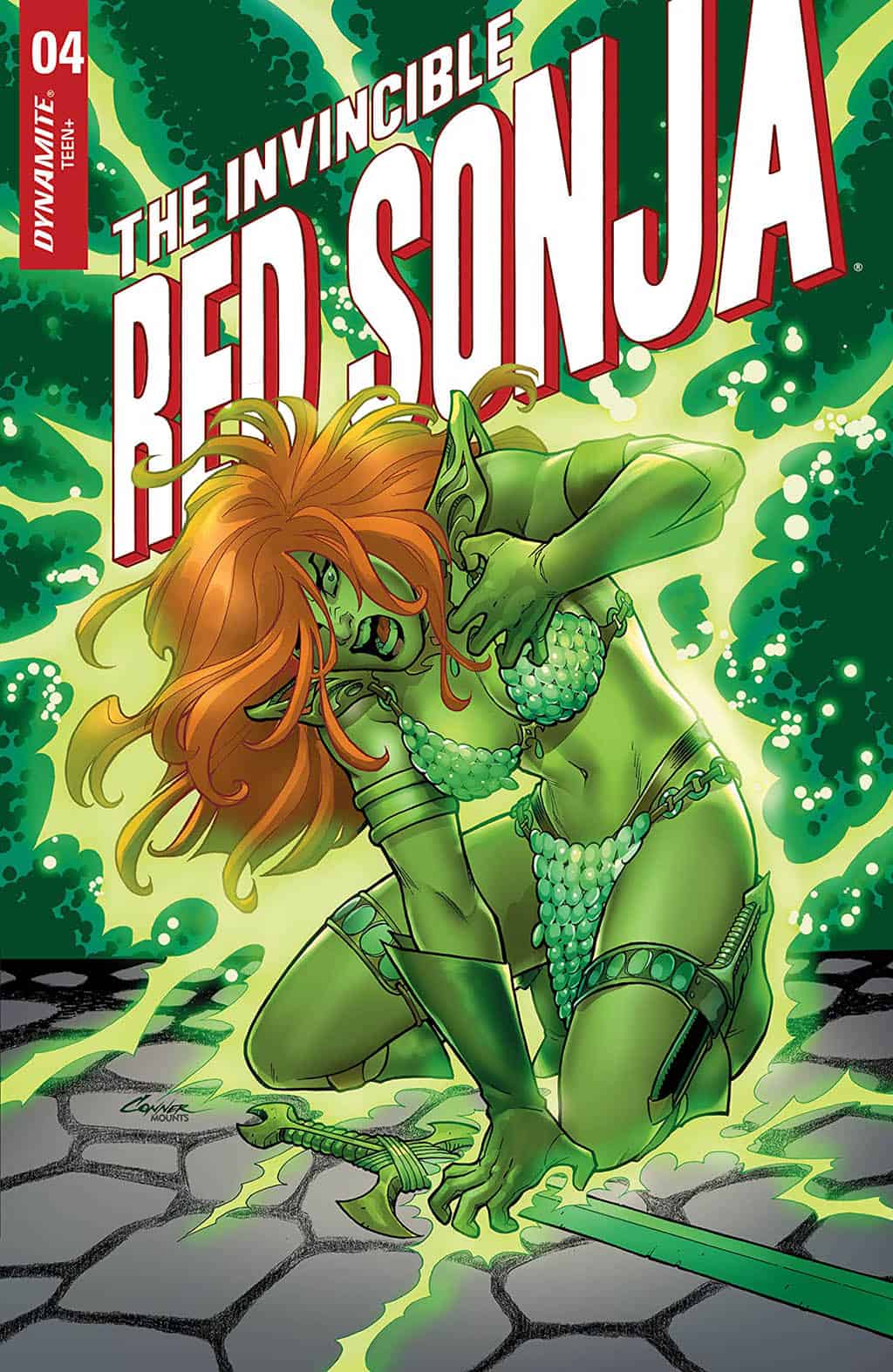 Red Sonja has been on bodyguard duty watching out for the Princess Zaria for a few issues. Taking up the wizard Breleq's promise of reward, Red Sonja and her ally, Tuma, track down the crown thief just in time to discover a larger plot in action.

Red Sonja has always had a little “invincibility” to her character. Sometimes it was just her skill in battle. Depending on the series, she’s had goddess granted powers. In The Invincible Red Sonja #4, we learn why she’s called ‘invincible’ in this series, and it’s a great plot development on both the meta meaning and a literal one.

If your enemy, Red Sonja, is a peerless warrior what could you do to them to turn their prowess to your advantage. In his grief, Brelaq curses Sonja making her might his to command.

There’s an intense dream sequence where Red Sonja is confronted by Scathach, the goddess who blessed Sonja with her skill in battle. Scathach suggests Sonja broke her vow to the goddess and will pay a penalty.

Amanda Conner and Jimmy Palmiotti understand how to write a Red Sonja comic. Jimmy’s plot is fast and action packed. Amanda’s dialogue fits Sonja’s world. In a period comic (or a sword and sorcery comic like Red Sonja), how the characters think and what they say is critical to the success of the comic. Castles, warriors and demons require a different mindset. Sonja does a fair amount of cursing, and it’s always period-correct words like “Tarim’s red blood” or “Erlik grant me the reach…” Those words are important because they keep us in the scene and story. One modern word or thought breaks the world-building and pulls us out of the story. That never happens in Invincible Red Sonja #4. 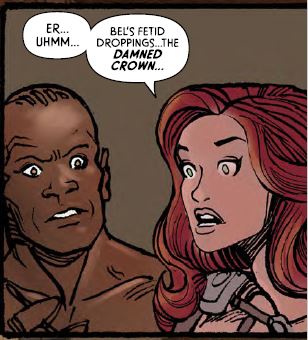 At first glance, Moritat’s art didn’t grab me. The art style reminds me of Barry Windsor Smith’s Conan — loose lines but strong story-telling and character acting. After a closer read and review, Moritat’s artwork grew on me. His facial expressions go a long way to illustrating what’s happening in a scene like when Sonja and Tuma forgot to grab the crown. Their eyes tell us everything we need to know about the level of trouble they landed in forgetting the crown.

It’s hard to be a barbarian. Like Conan, Red Sonja’s warrior outlook on life sometimes gets her into trouble. If she did a little more forward thinking and a little less devil-may-care-not-my-problem, she might not dig herself into a hole quite so often.

Consistency is important in world building. Much of this issue happens in the castle, and the interiors always look like an extension of the previous room. Sonja is using a sword with a very particular shape, and it’s always the same shape throughout the issue. That attention to detail can be found throughout the creative team (plot, dialogue, art, colors, and letters).

“A curse to you, foul Brelaq! I will haunt your days and nights.” – Sonja

If you are a classic Conan the Barbarian fan or like sword-and-sorcery in general, you’ll enjoy Red Sonja #4. Palmotti and Conner are including the right amount of swords, action, and magic to entertain all fans of the genre.

There are a lot of second, third and fourth level characters in this issue. I could have used a recap of who’s who and where we are in the story. 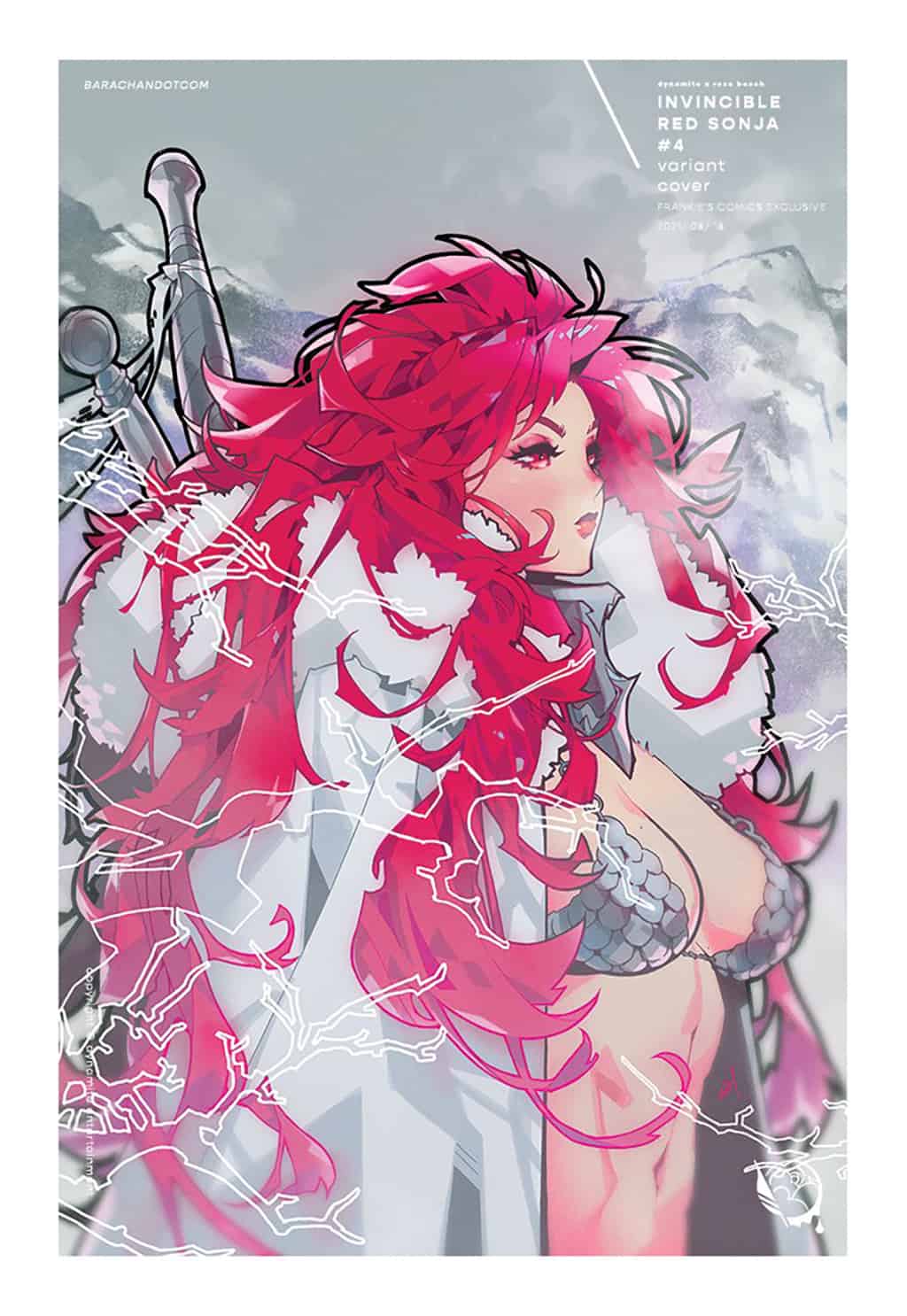 Amanda Conner’s covers for Invincible Red Sonja have been great, and issue #4 follows the pattern. The cover features a scene from the comic but doesn’t give away the entire story (which is always welcome) and focuses on Red Sonja (the entire reason I’m reading this issue).

How will Sonja break Brelaq’s curse next issue?

Dynamite has produced a lot of Red Sonja titles over the years. They have a very solid hit with Invincible Red Sonja.  Everyone's taking notice.  As of August 19, Dynamite commented that this series has been expanded to ten issues!!

The Invincible Red Sonja #4: Always Unmask Your Foe Before Claiming the Reward