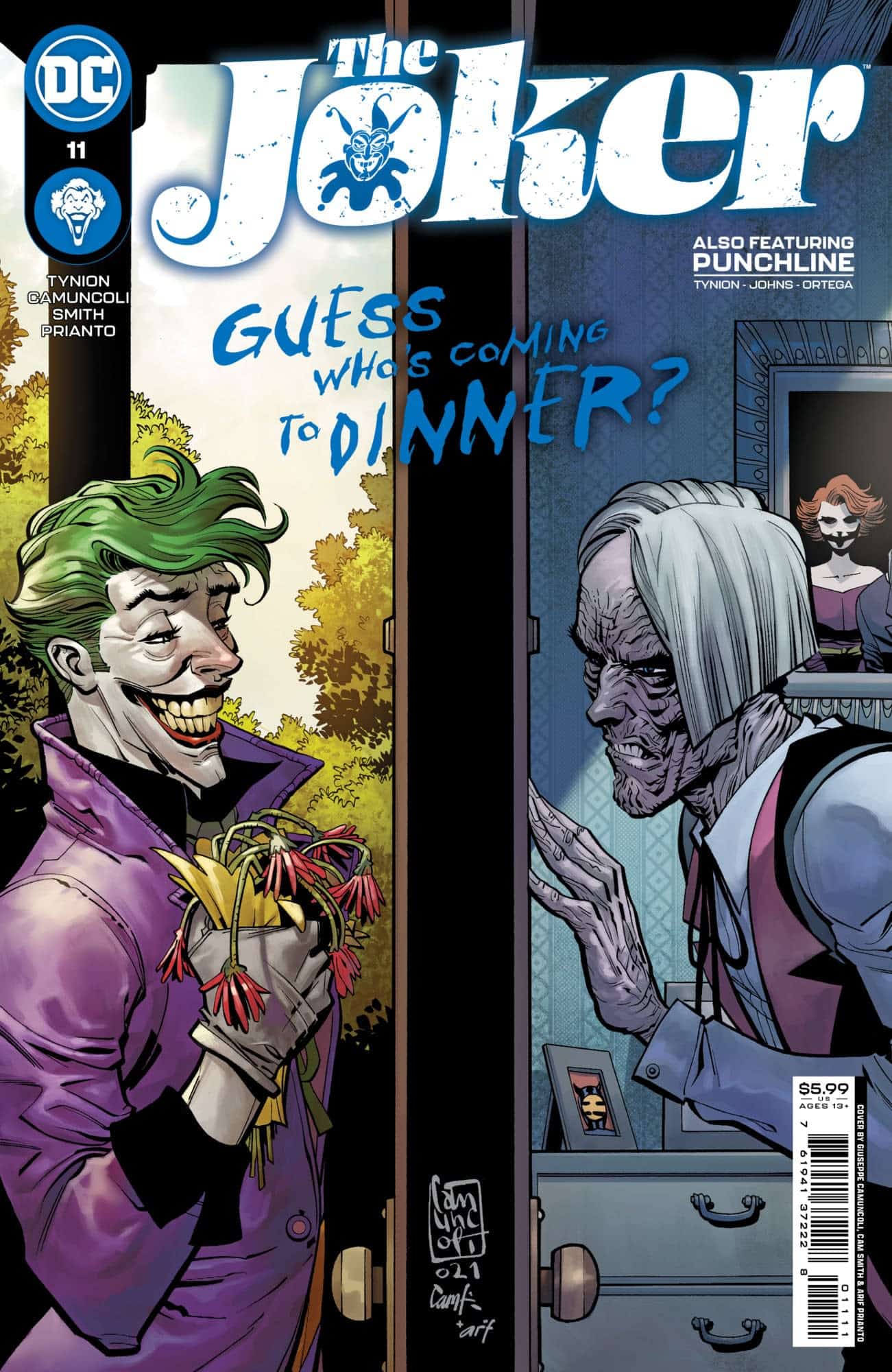 After a close encounter with the murderous billionaire Sampson family, Jim Gordon finds himself benched by his injuries... and mostly by his daughter, Barbara. But Jim being Jim, one can’t expect him to stand on the sidelines for long.

And, in the Punchline backup, the anti-Punchline alliance of Leslie Thompkins, Harper Row, and Kelly Ness find that Kelly’s information on Punchline may not make keeping her behind bars as easy as they’d hoped.

Well then! It took me a moment to get situated after last month’s flashback/side story, so I’ll give a brief situating recap. If you don’t remember when last we met with Jim Gordon, his quest to take down the Joker had brought him (and his tentative ally, Vengeance) into direct contact with both the Joker himself and Dr. Baum. A Robert Durst-like ghoul of a man, Baum represented a massive underground network of criminal facilitators – an organization that has been mentioned several times throughout the series to date. Though some of the information gleaned from Baum proved interesting and useful – to Jim as well as to the reader, their tete-a-tete was interrupted by the arrival of the Sampsons, a Beverly Hillbillies meets Texas Chainsaw Massacre nightmare of a family with a serious grudge against the Joker. Pursuing that grudge, they killed Baum, kidnapped the Joker, and left Jim for dead with a blade through the chest.

Now, I’m sure no one is surprised that Jim survived the blade to the chest, I did kind of wonder how exactly he was going to escape it. As it turns out, his escape is by way of his daughter Barbara, and when he wakes up, he is back in Gotham City, patched up and benched; so benched, in fact, that Barbara leaves him with Cassandra Cain as an unseen babysitter.

I’m sure Barbara will be just as shocked as I was when her insistence that he stay in safety proves futile and he goes out, injured and alone, anyway. Far from being a deterrence, Jim is a little relieved to be shadowed by a Bat of some kind… and given what he’s been through, I doubt anyone could blame him. I, too, would be more comfortable walking into danger if Cass Cain were following me around to protect me.

This sets Jim off on the next leg of his Joker Quest… but he is left with a frustrating feeling that Barbara is holding something back from him… and she is; the reader will know it’s the possible resurrection of her brother – Jim’s sociopathic serial killer son, James Gordon Jr.

Of all the new characters who have made their debut in James Tynion IV’s Joker series, I must admit I find the Sampsons among the most… amusing? I won’t say they’re the most interesting – the entire underground criminal support network is the most fascinating for me personally, and Vengeance brings a lot to the table, as well. But the Sampsons are just fun, in the worst most horrific kind of way. As a metaphorical stand-in for the destructive consumption of the 1%, they work beautifully and as a story element they fit perfectly with the “inspired by a true story” 70s horror flick meets detective thriller tone of the Joker series as a whole.

Tynion must enjoy them as well, considering they’ve had perhaps the most elaborate origin sequences of the new featured players so far – including two opening sequences, both of which were outrageous in a grotesque sort of way. It’s enough to make one worry for Simon Saint and Scarecrow if this crew should ever find out that A-Day was perpetrated by those two and not the Joker at all…. not that I necessarily expect them to emerge from this series intact, but we’ll see.

Until recently, the primary artist here has been Guillem March, but I believe he’s recently exited the series. It’s a shame, given how well his style fit the book, but if Giuseppe Camuncoli is his replacement, it’s actually a good substitution. Camuncoli has his own style, but he’s also obviously remaining true to the visual flavor set by March. It’s always interesting when a new artist comes onto a book and is clearly trying to maintain some visual consistency – it doesn’t normally happen, but when it does, it can take the edge from sudden artist swaps. In this issue, the multitude of inkers is more of a problem, because while every inker is high quality and works well with Camuncoli’s pencils, it does create some inconsistency from section to section. It’s not that big a deal, but it does serve to remind me of how big a difference the inking makes to the overall look of the work.

Altogether, the lead feature continues to impress. That said, I did find Gordon’s semi-instantaneous return to Gotham and semi-recovery to be slightly rushed. It isn’t necessarily something that threw me off or affected my enjoyment of the issue, but it did make me wonder whether Tynion’s decision to step back from mainstream superhero work has compressed the story’s timeline at all because it did seem a bit abrupt.

That brings me to the Punchline backup, where several threads are beginning to pull together and reveal the larger picture – most notably the subplot between Cullen Row and his new boyfriend, Bluff. With that name it’s not exactly shocking that he is a member of the Royal Flush Gang, but what wasn’t obvious until this issue is that he is the son of the eponymous “royals” – and currently embroiled in a generational disagreement about how best to proceed as he attempts to recruit new blood through his support of Punchline.

That’s not all that happens in the chapter, of course – there is also the continuing saga of Kelly Ness and her alliance with Harper Row and Leslie Thompkins as they attempt to keep Punchline behind bars using Kelly’s personal knowledge of and history with her. As is the case with most legal issues, that proves more difficult than it should. This puts Kelly in a precarious position as Punchline’s vendetta against her could prove even more dangerous outside of Blackgate than it did inside.

I’m going to say this is my favorite Punchline chapter to date – everything comes together beautifully from the coalescence of Cullen subplot (which, funny enough, has been the least compelling part of this story for me until now) to the beautiful artwork and atmospheric colorwork from Belen Ortega and Alejandro Sanchez. The Punchline backup has been blessed with a series of excellent artists, but Ortega is the one who has best captured the feel that I’m looking for in a Gotham-based, Punchline-centric story.

All told, a strong installment in our Gordon and Row series – and, hey, let’s face it, that’s what it actually is. I don’t know what’s going to happen with the Joker book, or with Punchline herself, after Tynion’s last issue in April – I wouldn’t be surprised if his departure signals the end of the book, which only ever existed as a follow-up to the Joker War plot anyway. A great many of my thoughts about the book will rest on how it wraps, I think. But for now, at least, I have consistently found the Joker to be one of the more enjoyable books on the stands these days… and I never would have expected that from myself considering how little I care about the Joker.

A strong, if transitional, chapter of the lead Joker story moves the plot along while taking the time to explore some of the most intriguing additions to the cast – that is, intriguing if you’re interested in schlock horror fun, which I absolutely am. And in Punchline, subplots I hadn’t previously been very invested in are beginning to pop and grab attention, making this my favorite chapter to date.