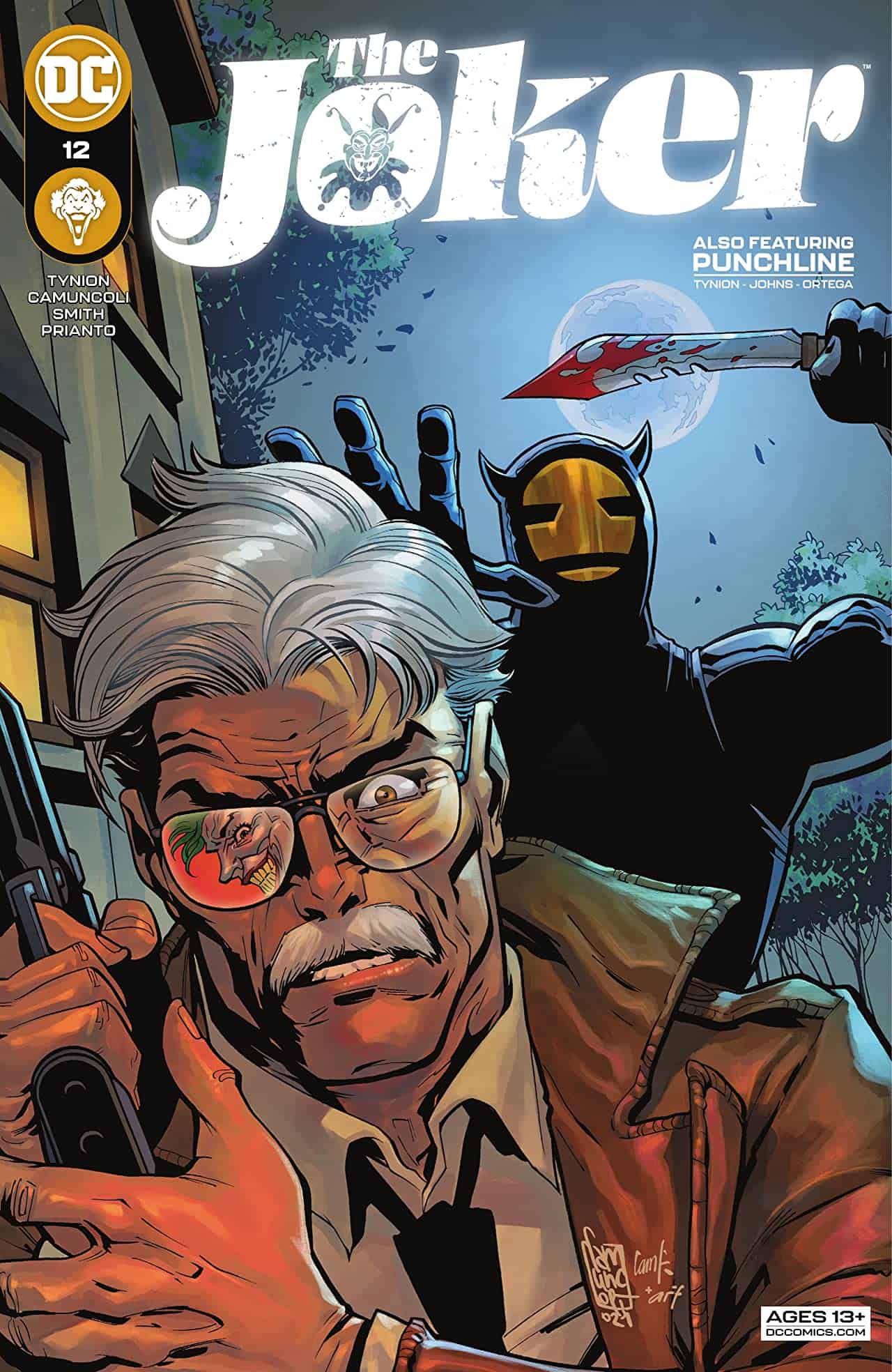 The stakes continue to rise for the Gordon family as Barbara comes face to face with Cressida and her oversized manservant or...bodyguard? Fortunately, this isn’t Jim Gordon’s first time around the block with shady organizations, so he is entering the scene prepared... and armed with information he wasn’t meant to have.

And in our Punchline backup, the trial of Alexis Kaye is looming, and a media circus has sprung up around it, with her supporters clamoring for her release even as Bluebird has a final confrontation with Punchline’s longtime best friend, Aiden.

So, when last we met with the Joker (the book, not the character), Barbara had attempted to bench her father, leaving Cass Cain to babysit him with about the predictable results: Jim jumped right back into the case anyway, recruiting Harvey Bullock as an assistant. He also turned his being followed by a Bat into a positive by incorporating her protection into his game plan. Meanwhile, Barbara met with Jim’s employer, Cressida, ostensibly a representative of the Court of Owls – an organization that has apparently raised her late brother James Jr, turning him into a Talon.

It’s a lot! And it’s about to become even more as the story ramps up in preparation for the final issue in two months… beginning with a status update on Vengeance, the clone of Bane who is currently seeking free will, and sliding into Cressida’s private plane, where she and her massive manservant are engaged in false pleasantries with Barbara… which quickly deteriorate as one would expect.

It’s actually a little strange that Barbara even allowed herself to get into such a disadvantageous position – trapped with minimal backup and face to face with someone who is perhaps a… supervillain, or at least a representative of such. She has come because she needs to know why they took her brother and made use of her father, but a proper villainous monologue at this point would involve commentary on the inevitable self-sabotage of following one’s personal interests into a dangerous situation, particularly when you lack any leverage.

The good news is, Jim does have leverage. As for what the leverage is… that’s the key to everything. It’s a bit of information that makes everything fall into place while simultaneously reopening questions about points that I, personally, had long thought settled. So here’s the question: Who, exactly, was behind A-Day?

Last issue I wondered whether Tynion could pull the threads together in time for a satisfying ending. As of now, I’m fairly sure he can, although I do still feel as though some of the pathways that had been opened by previous issues have been prematurely closed by his decision to step back from mainstream comics. It’s just as well – the Joker has never been a book with an infinite concept. It is interesting, though, how far the plot has wandered from even pretending to be about the Joker.

Newly instated series artist Giuseppe Camuncoli continues to impress. Last issue, I felt he was doing his best to maintain the general artistic direction established by Guillem March, and I still think so. That said, I am also beginning to see a bit of classic Jim Aparo bleeding into the faces and layouts – particularly in the back half of the lead feature encompassing Jim’s confrontation with Cressida and her tagalong. If that’s not a compliment, I don’t know what is.

Overall, a great issue of a series that has always surprised me. I’m very curious to see how it surprises me, in the end.

One of the most interesting things about the Punchline backup for me has been the exploration of social media activism on behalf of people who may well be guilty of whatever they’re accused of. Don’t get me wrong here – I’m fully aware that the American Justice System is prone to false convictions and railroading – I can’t speak for international systems, but I’m guessing they all have some issues.

But there have been times when, in my opinion, the public’s passion to address injustices has resulted in a groundswell of support for people who almost certainly did whatever they were convicted of doing. Seeing Punchline manipulate those sentiments to create a completely unjustified support system has been great – enough so that I honestly wish the backup had focused more on that and less on Harper Row and Kelly Ness and such.

Now, with only two chapters (less than a single full issue) remaining, Tynion and Johns are bringing that issue back to the surface. Harper watches a costume bedecked Alexis walking in chains into a courthouse, surrounded by cheering fans and “Free Punchline” signs, and wonders what it is that is making people fall for her innocent act, and why people believe that a sociopath like Punchline cares about them. There’s a question that should be aimed at the people marrying serial killers in prison.

As it stands, with the events of this chapter, it seems like Punchline may be headed for a not guilty verdict – or at least reduced legal culpability… which is fine for the plot. Punchline must be free to frolic, after all. But as interesting as the back has become, especially in the past chapter or two, I do think it’s missed an opportunity to explore a key concept in greater depth. Still, it’s a baton that can be easily passed to the next team to deal with Ms. Kaye if they’re interested.

I’m really going to miss this series in a few months when it has reached its conclusion. That said, I appreciate a book that knows its scope and steps offstage before it overstays its welcome. And while this is really only nominally a Joker book, it may well be the best Jim Gordon story in years.