The Joker #13: The Civilized Brutality of Mealplans 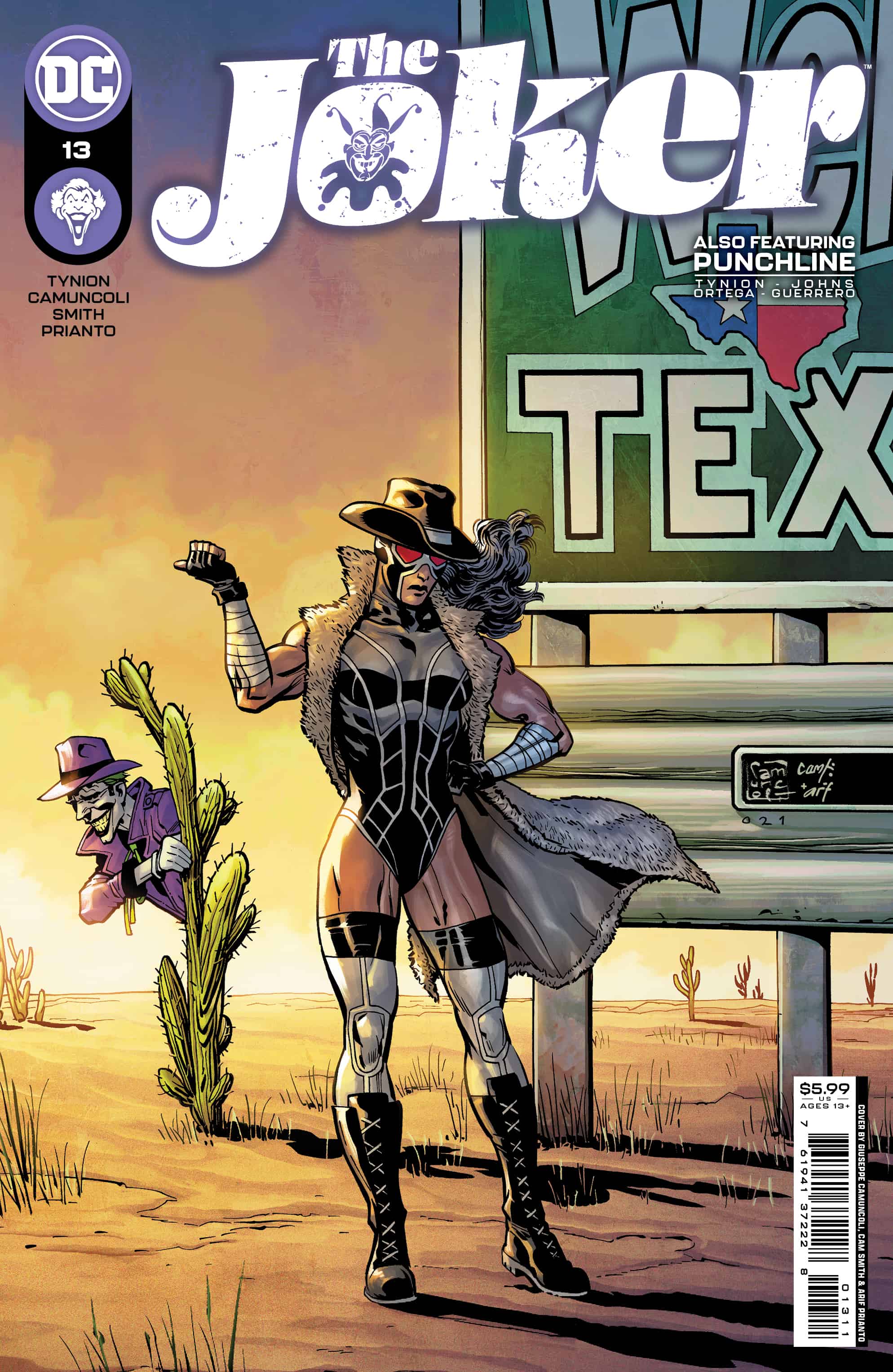 The Joker has been captured by the cannibalistic Sampson family with the intent of using him as the main course of the night. Things look grim for him, but salvation may come from a most unlikely source as Vengeance, the daughter of Bane, advances on the Sampson estate, intent on fulfilling the drive to kill him that has been embedded in her mind since “birth.” With so many people gunning for him, what are the chances of the Joker surviving this, the penultimate issue of his namesake series?

Meanwhile, Alexis Kaye’s fate is up in the air as the trial of Alexis Kaye begins.

Well, we have arrived at The Joker #13 – the final step before the final step. After the revelations from last issue, it was up in the air how the story would progress, with various characters heading in different directions, and several plot threads as yet unresolved. However, of all the threads, and given the title of this series, it seems most appropriate that the last act begins with a return to the titular character.

The Joker is currently being held in what amounts to the larder of mega-rich cannibals, the Sampson Family. The issue itself opens on a prolonged scene of said cannibalism (it’s very evident what they are eating. Very.) starting with a pile of eyeballs used as appetizers and honestly, it’s about as disturbing as it sounds.

I’ve long said that I find this family to be pretty interesting – which I do. As a metaphor for the destructive consumption of the 1% (or the .01%), it’s a bit on the nose, but they do add an unsavory element to the book which seems appropriate for the kind of horror-noir tone that Tynion has been striving for since the first issue.

That said, part of the fun in characters like these lie in inevitable butt-kicking, so seeing Vengeance make her way toward their estate like the unstoppable killing machine she was built to be was pretty exciting. Honestly, she punches someone’s head clean off their shoulders and it’s hard to top that. Adding to the tension is the rapid cutting between Vengeance’s rampage and the Sampson estate, where the Joker is engaged in frenzied banter with the… chef? During what should be the last moments of his life.

All this leads to the final moment where all the threads begin to gather and culminate in a long-overdue meeting that could lead to some existential questions for at least one of our players.

Now that we’re on the precipice of the finale, I’m starting to formulate thoughts on both the story as a whole and the interpretations of the world and characters – particularly the Joker himself. I’ll save the deep thoughts for the series finale, but I will say the feeling that the story flow may have been affected by Tynion’s departure from superhero comics hasn’t abated, but I do think it works overall despite that.

This issue also raises questions about how the recent revelation that A-Day was actually Bane’s doing works with things like Simon Saint’s implication that A-Day was part of a plan to get Jonathan Crane out of Arkham in Fear State Alpha, and the existence of the Bane Zombie in Task Force Z  The latter, at least, isn’t difficult to explain; the supervillain support network that debuted in this very book provides an easy answer, and may well have been created to foreshadow this very situation.

Well, we’ll see how it plays out!

For now, it’s another solid chapter in the Joker series, though it did make me question my life choices on those first few pages.  Camuncoli’s artwork is disturbing in the right places, depicting the Sampson’s civilized barbarity perfectly, while his Vengeance is like a force of nature – immense, imposing, and unstoppable. Fantastic.

Moving to the backup, we have Chapter 13 of Punchline. For the past year, we’ve watched as Leslie Thompkins and Harper Row attempted to gather information on Punchline, even infiltrating Blackgate to gain access to her former best friend, Kelly. Now the day has finally arrived, and the trial of Alexis Kaye has begun.

Aside from Alexis herself having made the bizarre decision to appear in full Punchline regalia – a choice she does explain but unconvincingly – the trial proceeds about as one would expect. She flexes her charisma, manipulates onlookers, and aims directly for the jury as well. Her arguments for why she should be freed are a bit flimsy, but they have been since her first appearances post-Joker War. They also amount to an argument for jury nullification. The question is will this literal serial killer manage to escape justice on rhetoric alone?

Well, we do find out the answer in this chapter, though I’m not going to spoil it.

Hopefully, the next chapter will give a little insight into some of our lingering questions, as well as the ramifications of events on actual protagonist Harper Row and her brother Cullen.

With both the lead story and the backup poised to barrel into their final chapters, The Joker #13 is both a solid individual issue and an intriguing setup for the final page in both tales. The lead pairs exciting action with visuals straight out of a horror film. Punchline pays off months of build with an answer to the lingering question of what will happen to Alexis Kaye. And now it's all over except the cleanup.

The Joker #13: The Civilized Brutality of Mealplans