The Joker #15: Back to the Rooftops 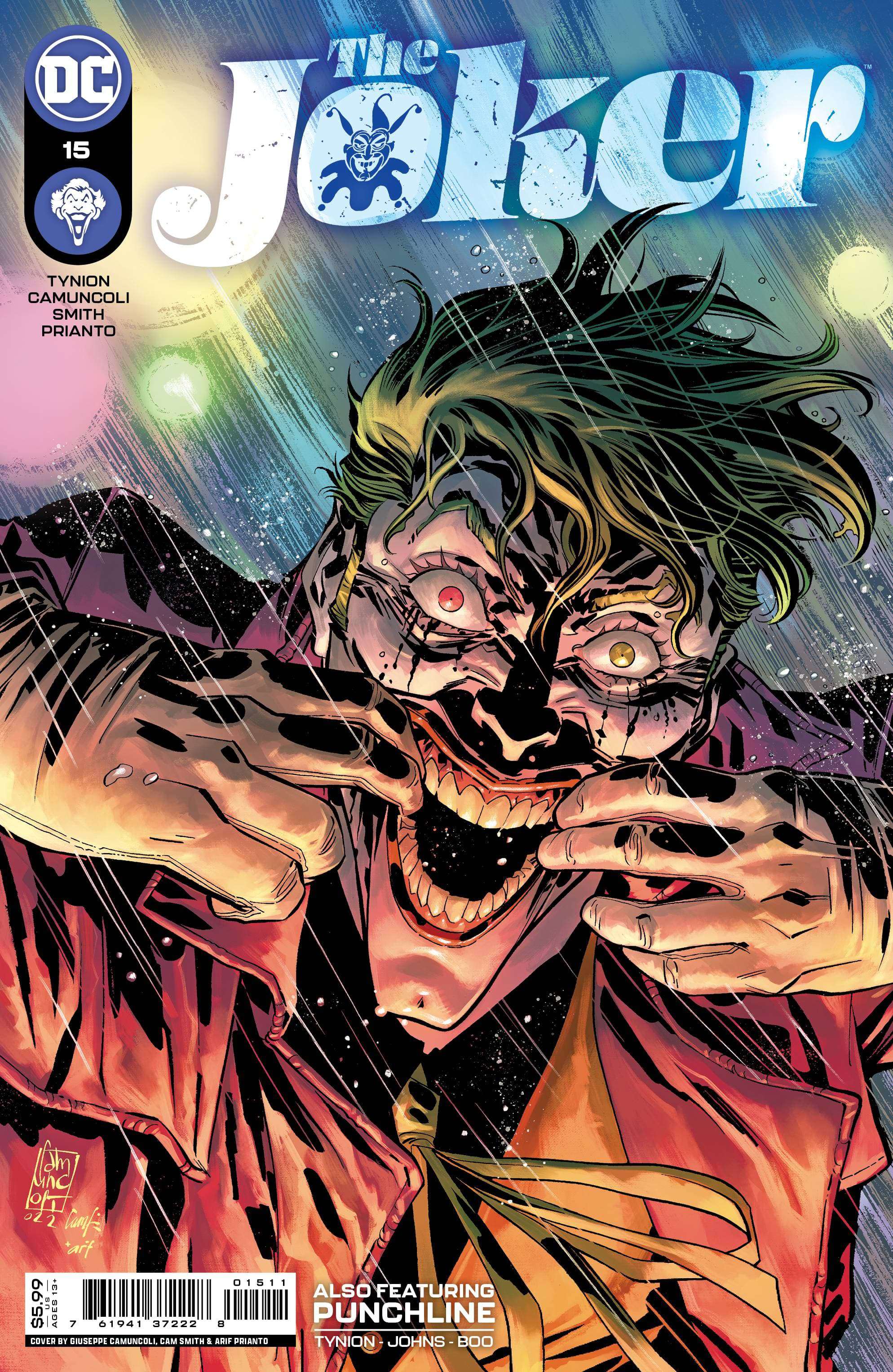 The closing bell rings on the Joker series as Jim Gordon returns to Gotham City for a meeting – and catch-up session - with Batman. The Dark Knight’s most pressing concern: Where is the Joker, and did he survive Gordon’s contract with Cressida?

And, it’s the final confrontation between Bluebird and Punchline. Who wins, who loses... and what comes next?

It’s been a long (and frequently delayed) road from the first issue of The Joker to the 15th, and final, issue.

It’s also been quite a while since the last one, so first, a quick recap: when last we met, Bane had arrived at the Sampson home to confront his “daughter,” the clone Vengeance, stopping her from executing the Joker as her programming demanded. This led Jim to take the Joker and run, so to speak, ending up at a check-in with Cressida who explained her intention to use the Joker as a pawn in her quest for revenge against the Court of Owls. Given the chance, Jim seemed set to execute the Joker as per his initial agreement – though mostly because the Joker is just the worst. The question of whether he had done so was, however, left open as Jim returned to Gotham to face questions from the GCPD and then, at last, his reunion with Batman.

This issue opens with a flashback to their early Joker fighting days – the days before Gordon realized that crime was never-ending and the war could not truly be won. Now, along with his longtime ally, Gordon recounts the parts of his “adventure” that he hadn’t conveyed to his interrogator earlier. Here, he unravels the whole of the Network’s history and plots… and also the major financial backer behind the organization. It serves as a summary of the series to date, while also filling in some of the gaps. We learn the ultimate fate – for now at least, of the Father/Daughter powerhouse duo of Bane and Vengeance. Tynion even remembers to follow up on the bombshell about James Gordon Jr… though I do have some questions about Barbara’s reaction.

Now, I’ve said many times that I was not certain how Tynion could pull the threads together by the ending, and the addition of one extra issue didn’t assuage my concerns. So the real question is… was he successful? I’m going to say… mostly.

Giuseppe Camuncoli’s artwork remains excellent – his use of silhouettes and shadows jumped out at me, particularly in the Gordon and Batman scenes. When Guillem March left the book, it would have been easy for the tone and visual style to go in a completely different direction, particularly as March has such a strong personal style. However, Camuncoli stepped right in with a style of his own that nonetheless maintained a consistent tone and helped to keep the title feeling of a whole.

The story is a little more complicated. The conversation between Batman and Gordon is well done for what it is but does feel heavy on the tell-don’t-show. That’s probably inevitable given the amount of information that needs to be conveyed in a relatively small space, but I can’t help thinking that this title has fallen off in the later issues as it does feel as though the tightly woven plot and noir atmosphere weakened over time with the rush to finish the plot out. Also, I understand that he is her brother, but Barbara Gordon indicating that she wants to resurrect James Jr. for real is a little mind-blowing to me considering he was a serial killer. Although I encourage it as I think he’s a great character, I do think that logic deserves a line or two of attention to explain her reasoning.

In the end, Tynion sets up Gordon for a new stage of his life, while also planting the seed for a return to the status quo whenever that happens, which I’m sure it will. I may need to go back and reread the entire series to let the pieces fall into place and decide how I feel about it as a complete piece but for the moment I feel as though The Joker started strong and ended somewhat less strong, though I enjoyed it, nonetheless.

And that brings us to Sam Johns and James Tynion IV’s final Punchline backup, featuring the return of previous artist Sweeney Boo. It’s all been leading up to this as the recently acquitted Punchline is confronted on a rooftop by BlueBird (Harper Row) as the two compete both physically and intellectually. In the end, the backup serves as a lead-in for an upcoming Punchline title, “Punchline: The Gotham Game,” which will be arriving this fall.

I’m a little curious as to how Punchline will carry a title – and whether she will or if it will be similar to the Joker title as a whole, and her backup, in particular, centering on the hero who is trying to take her down rather than on Punchline herself. We shall see.

The Joker finale achieves what it intends to do, setting up the characters for the next phase of their lives as well as putting a bow on the storyline that has been rolling for the past 15 issues. As for whether it does so successfully, it's a mixed bag with some highlights and a lot of exposition.

The Joker #15: Back to the Rooftops