The Joker #3: Monsters Through Heroic Eyes 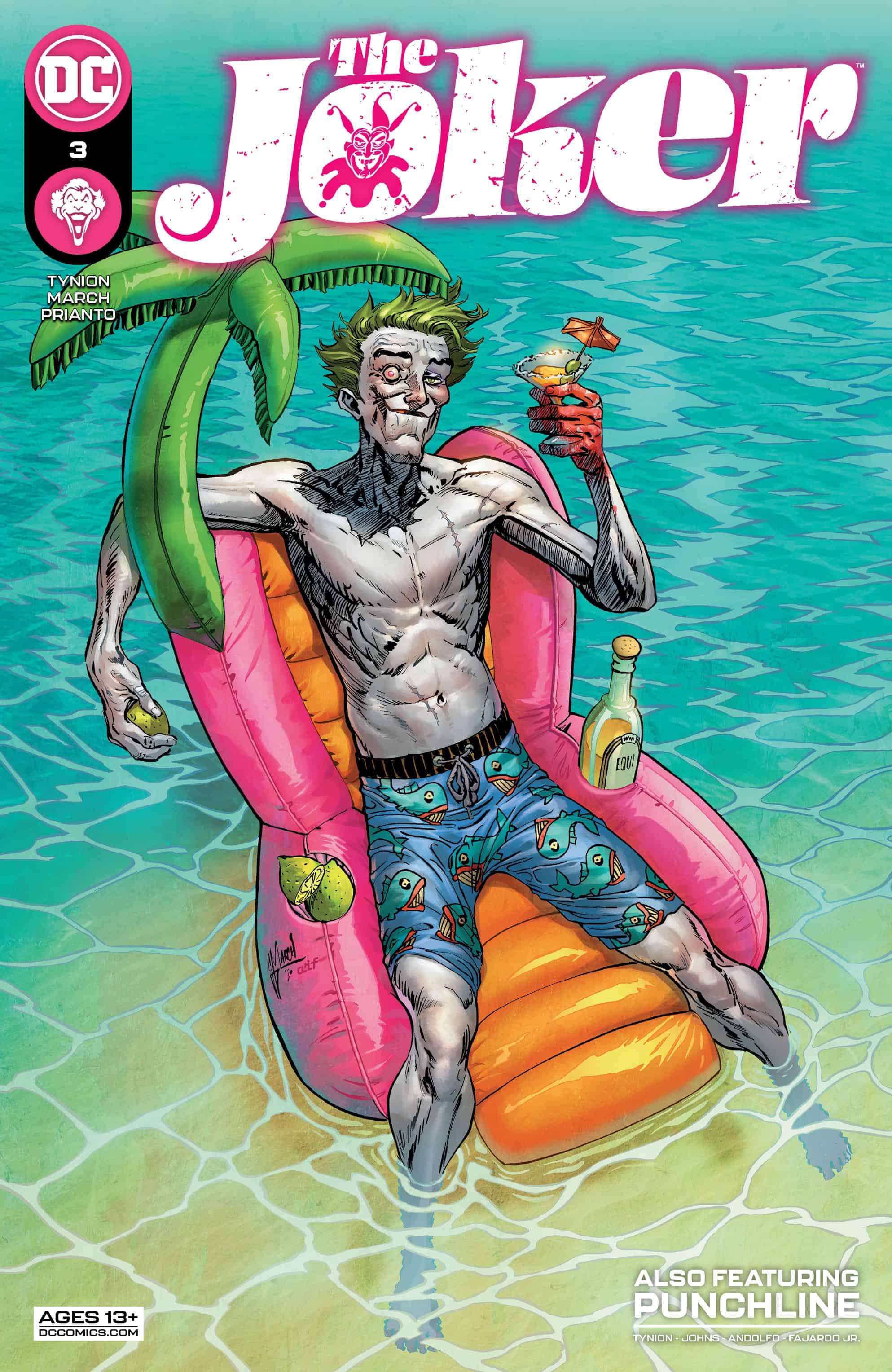 After his recent separation from the Gotham City Police Department, Jim Gordon has taken on the task of finding and executing the Joker… though he hasn’t yet decided whether to act on the second clause of that mission. Now, with a bottomless credit card in hand and a number of leads to follow, Jim takes off… and the hunt is on!  But he isn’t the only one looking for the world’s worst clown – a parade of dangerous bereaved are on his tail as well, looking for revenge after the deaths on A-Day.

Also, Harper Row continues her investigation of Alexis Kaye in her pre-Punchline days. Meanwhile Punchline herself reckons with the continued ill will of the Royal Flush Gang’s Queen of Spades and the newly re-imprisoned Ace of Spades… Grace Balin. Orca.

In a recent interview, James Tynion IV spoke about his aims with the Joker book and the current Batman run. His statement was basically that his Batman run is aimed at attracting new readers and creating new mythology, whereas Joker is about deep diving into the Bat-mythos and previous continuity.

Joker #3 is a prime example of this. It opens with James Gordon going over his history with the Joker, specifically The Killing Joke and the lingering trauma he’s suffered ever since. Beyond this serving as Gordon’s personal turning point with the Joker, Tynion also uses it as a watershed moment for Gotham itself in a way – the moment when the freaks started to become the greater threats relative to the old guard criminals of organized crime, street gangs or independent killers and other career criminals.

If you’ve been following Tynion’s Batman run since “Their Dark Designs,” some of this should come as no surprise – while he didn’t put a specific timetable on it, that story was in part about the way Gotham changed, the classic rogues turning darker and more twisted until the Joker became the devil.  That’s where the continuity deep dive comes in, with Tynion examining and recontextualizing the long history between Joker and Gotham and Jim Gordon, creating a narrative that can bring you from the silly Joker of the past into the monster he’s become. That includes some fascinating musing about who he is and in what context he is. Because really, what is the Joker when he’s not playing off someone, trying to be funny – or pretending to try to be funny, anyway? Does he act like that all the time?

Who is the Joker when he’s alone in his bedroom at night?

While the heart of the story lies in Gordon’s relationship with the Joker, there’s a great deal more going on as well. For example, there is Cressida, which last issue revealed (to the reader only) as a representative of The Court of Owls. There is also her massive companion, who has now become Gordon’s massive companion. I have thoughts on that man –his identity and his role. They aren’t too difficult to figure out if you consider what Batman character is oversized, has reason for a grudge against the Joker and would feel the need to cover his jawline and most of his face. And of course, this being Tynion, we also have new characters – a cannibalistic crime family, and the venom enhanced woman interviews have told us is called Vengeance. They’re all on the move now, circling their prey. The question is, who is going to find him first?

I have to say, in the past I’ve had a tumultuous relationship with Guillem March’s artwork. Don’t get me wrong, he’s a fantastic artist, but his style is quite unique and when let loose on a superhero title like Batman it hasn’t always clicked for me. On Joker, however, he’s just fully submerged into his element. Gordon is his classic, older white haired gentleman design with a sort of mix of strength and pathos that fits his character like a glove. His Joker is like a horror film monster – maniacal, exaggerated, and barely human. Cressida is beautiful, yes, but her expressions are oddly unnerving in a way that works well for the character.

More than that, even, March’s storytelling is on point – the ribbon of Joker’s tie flickers around his face, evoking fire, Gordon stands over the ghost image of himself locked in a cage, Prianto’s colors clarifying timelines, preventing them from running into one another.

Which brings me to Arif Prianto’s colors! The opening pages are a red-toned hellscape highlighted with contrasting colors in blue and green. Against that red background, the Joker himself stands out like a demonic beacon, in purple and green, his throne of baby doll parts looking for all the world like a throne built on corpses. His skin is colored in mottled contrasts as well, making him look inhuman and almost surreal – the image of the devil in Jim Gordon’s mind. And then you’re out of the past, and the into the soft, desaturated today. I’ve noticed that the colors in Batgroup books are uniformly beautiful and this is no different, though of course each color artist has their own style.

One day I’ll learn enough about lettering to really dig into the typography in comics, but the best lettering almost merges with the rest of the visuals to become a part of the imagery – working hand in hand with the artwork, the words, the colors to convey tone and atmosphere and Napolitano’s work has certainly done that.

Basically, I’m generally in love with The Joker – the book, not the character! It’s almost like Tynion’s attempt to use his Department of Truth style on a DC book, and it works.

Joker comes packaged with a backup feature: Punchline!  Here, Alexis is forced to grapple with Orca, the Ace of Spades, after the Queen arranged for her to violate parole. Meanwhile, Harper Row takes on the guise of Bluebird as she tries to get to the heart of who Alexis really is. After repeatedly hearing that Alexis had “one friend,” she determines that she must track him down.

The Punchline backup hasn’t been what I expected, to be honest – I expected more of Alexis herself. But paired with the Joker story, the format of this backup makes sense. Both stories are about the quest of an outside investigator to determine who the villain is, what they’re about and what they might be up to next. That makes for thematic cohesion that I appreciate, without feeling repetitive.

Mirka Andolfo’s artwork is lovely – it reminds me a bit of shoujo manga actually, which I love. That said, a shoujo style strikes me as an odd choice for a character who made such an immediate splash as a beautiful, sexy and, above all else, scary new threat. That said, the new artist taking over in a few issues is in the same vein, so I assume it was a conscious choice, and I can’t deny the style fits the tone of the story. Not to mention that the cuteness makes the crazy eyes Alexis sports when she gets mad all the more striking.

The Joker book as a whole is a great choice for Batman fans who want something more pensive and crime-fictionesque. It’s also one of the best Gordon-focused stories out there. By showing us the Joker through Jim Gordon’s eyes, Tynion raises questions that I personally had never stopped to consider before… and I’m curious as to whether we’ll find out the answer. The Punchline backup is a great variation on the “monster through the investigator’s eyes” style crime genre, and an excellent way to get a better sense of Punchline’s past, and thus her present.

The Joker is a series that started strong and keeps getting stronger.

The Joker #3: Monsters through Heroic Eyes