The Joker #4: What’s Black and White and Red All Over? 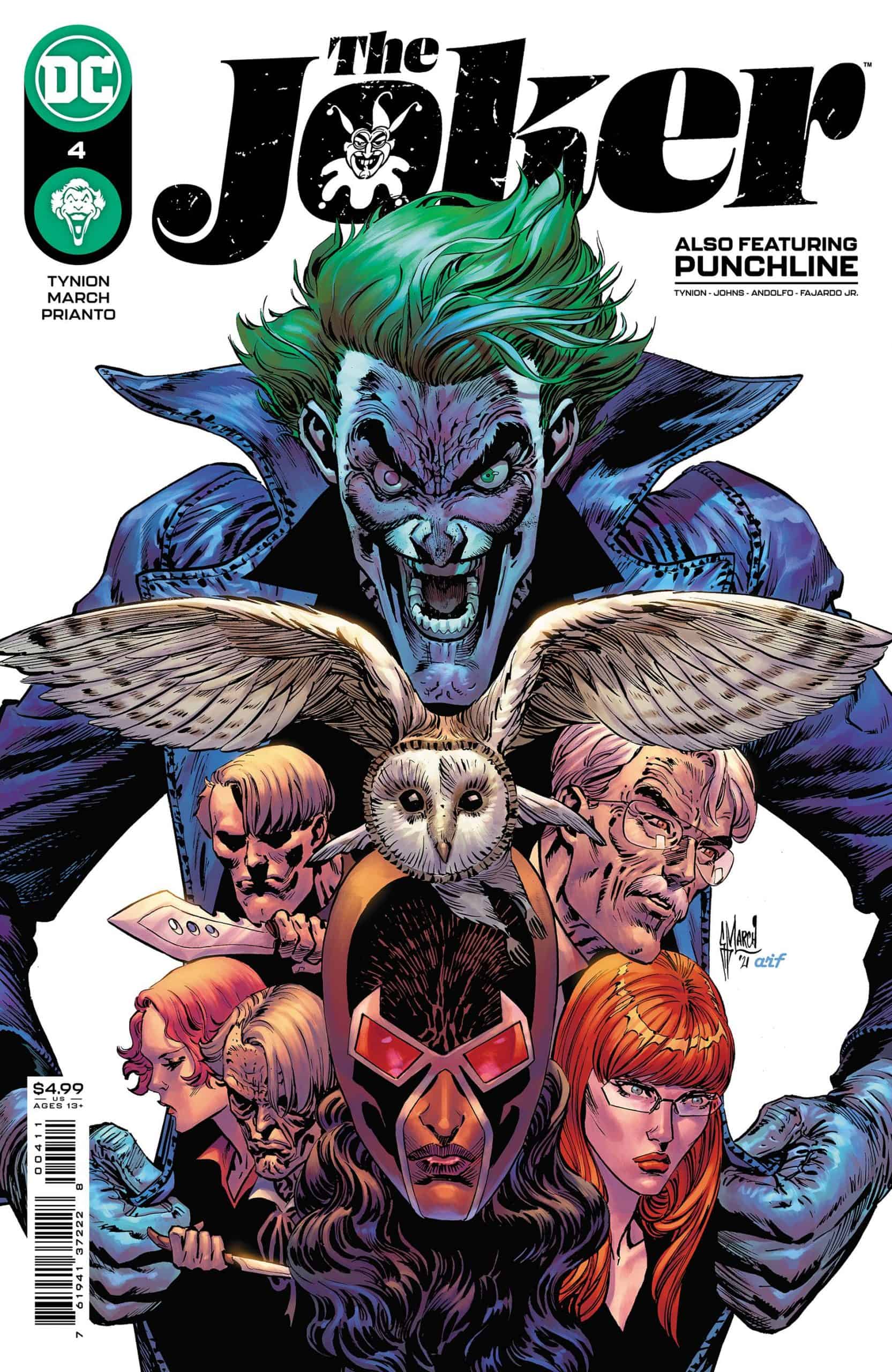 Dropped into the midst of a criminal war over who gets to possess (and kill) the Joker, Jim Gordon is forced to confront both himself and the nature of his mission. The situation is fraught, and it may seem impossible to escape, but never forget… the Joker is no idiot, and he is always a wildcard.

Meanwhile we join Punchline in the aftermath of an encounter with the Royal Flush Gang’s Orca. She’s bleeding, she’s down, but is she out? That question is just as relevant for Harper “Bluebird” Row, last seen paralyzed and in imminent danger of burning to death thanks to Punchline’s old college friend.

Last issue, Jim Gordon’s search for the Joker brought him right to the Joker’s front door – which neither Jim nor I expected. Under different circumstances this might have meant his quest’s successful completion, but of course things with the Joker aren’t nearly so simple and now Jim finds himself in the middle of a battle between criminal elements, all of which want to claim the Joker for themselves.

In one corner there is Vengeance, a superhumanly strong woman in a Bane mask and accompanied by Santa Prisca soldiers. Her goal? To bring the Joker back to Santa Prisca for execution after his apparent murder of Bane. In the next corner, the security of Joker’s hideout – less self-serving in a way, but just as problematic for Gordon’s purposes as they won’t permit him to retreat or take cover.  Finally, in the third corner, there are the Sampson siblings! These Texan cannibals are here to collect the Joker and bring him home for dinner.

The chaos rages, and with so many out for his blood you would think the Joker would be concerned… but of course, he’s the Joker. And he has just the right setup for this particular punchline.

The Joker continues not just its crime/horror frontline plot, but also its deep drive into the psychology of both the Joker himself and, most of all, Jim Gordon. Indeed, early in the issue Gordon presents a self-evaluation that I would recommend you bear in mind and use as a mental reference as he makes his choices and navigates the situation through the remainder of the issue; it’s a revealing look at the disparity between a person’s self-image and their actual character.

I think as of now I can confidently say that March has produced my favorite look for Barbara Gordon- she is reserved, beautiful and sharp eyed… not to mention the more he leans away from the cheesecake art he has often been known for the more I enjoy his style. His work has been compared to Kelley Jones, and while I don’t think their styles actually have much in common, the comparison is well taken as they are both well-versed in drawing out the horror undertones to Gotham’s mythos and exaggerating human proportions just enough to be unnerving. However, where Jones really jumped head first into and through the Gene Colon sphere, March’s work is mixed with a touch of a traditional comics style that helps to maintain a level of beauty mixed with the darkness.

Color Artist Arif Prianto’s deftly applied, moody coloring enhances this even more. This month, the colors are earthy, naturalistic, as befits the setting, while the Gotham scenes are colored in greens and, in the case of Cressida’s, more airy colors that help to establish the idyllic environment she currently makes her “home.”

I won’t give away the ending, but if you thought this story would confine itself wholly to Gordon tracking Joker, well… hold onto your chair, friends, because the focus is about to expand.

Of course, this brings us to our backup feature, Punchline by Johns, Tynion IV, Andolfo, Fajardo Jr. and Maher. On our last trek into Blackgate, Alexis “Punchline” Kaye’s current home, we found the Royal Flush Gang’s Queen of Spades calling in favors to bring her heaviest hitter, Orca, back to prison. The intent was to use her as an enforcer to bring Alexis to heel, and it seems to have worked as Alexis is bleeding, unconscious and quickly hospitalized.

Meanwhile Harper Row, having been exposed to paralytic gas and is in serious danger of burning to death as Punchline’s friend has left her to die. But that’s not the end. Because even if she manages to escape, a revelation about the location of Alexis’ only other friend could indicate that things are about to get worse before they can begin to get better.

Now I think I’ve mentioned before that I saw Punchline’s appearance in Joker War as incredibly powerful because of her aggression, beauty and larger than life presence. That made Andolfo a strange choice for me; her  work is softer and a little cute – reminiscent of a young adult graphic novel or shoujo manga. But the cuteness belies the content and I think the velvet glove that is Andolfo’s style makes for an effective combination with Tynion and Johns’ razorblade content.  It helps that she never shies back from depicting the ugliness at play either -you can see it clearly in Alexis Kaye’s wild eyes.

Punchline is proving to be a character with legs with the willingness to fight for her own base of power in ways that Joker’s previous “romantic” partner never did. What remains to be seen is whether the Joker can share the spotlight with someone like her, or if he’ll want her yanked offstage.

The Joker has done more for my interest in many of these characters than anything else in recent memory. The question of good and evil, what it is, and whether there is a difference between fighting evil and being good is delicious, chewy brainfood and just the kind of thing I love.

One day, the Joker and Punchline will meet again and then Gotham will really bleed. But for the moment I’ll just be here with my popcorn, watching the show.

The Joker #4: What's Black and White and Red All Over?