The Joker #5: The First Dark Cloud On The Horizon 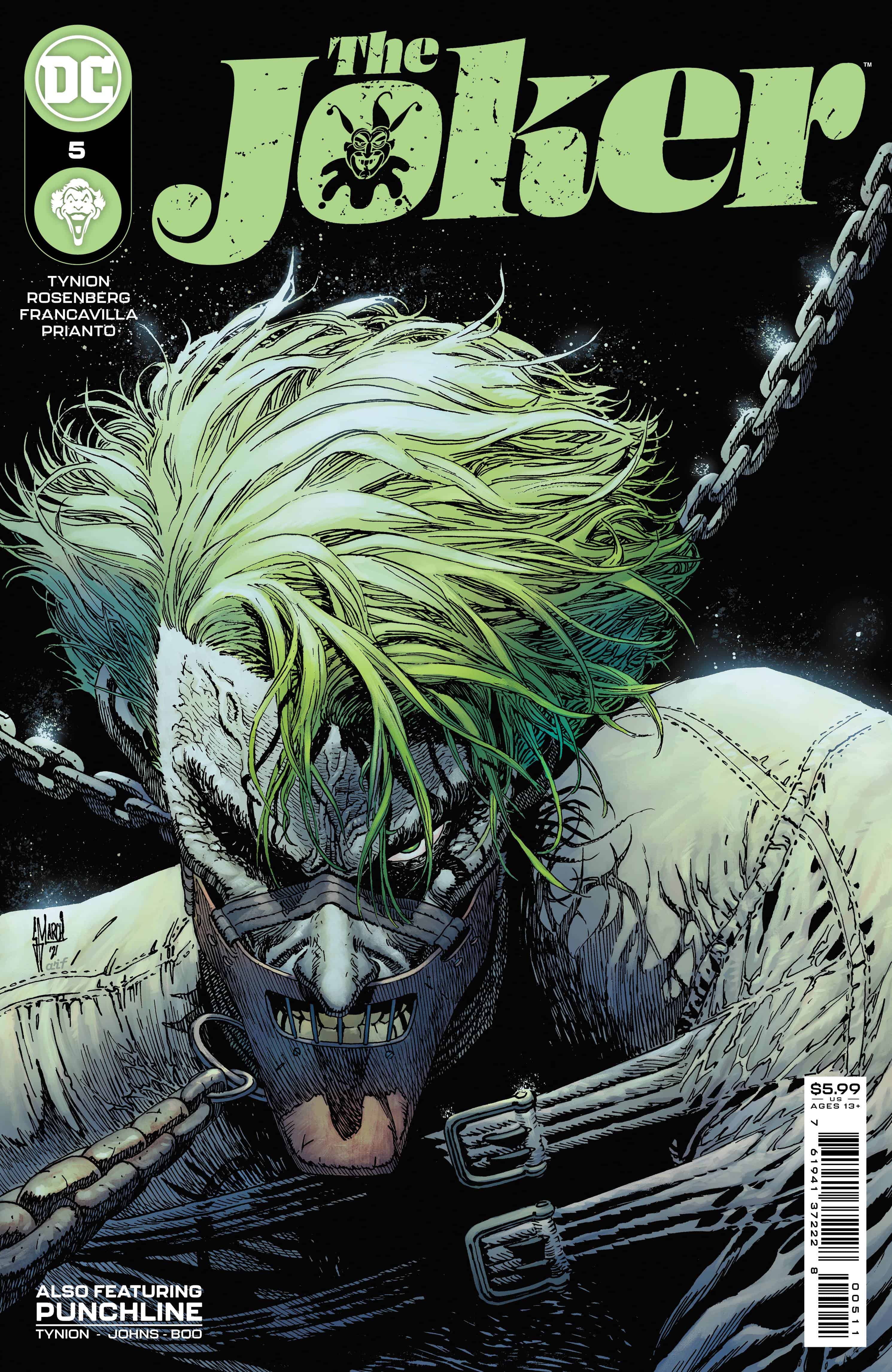 In this flashback issue, The Joker has recently been declared legally insane, and thus beyond the reach of the criminal justice system. Now, with the Joker sent instead to Arkham Asylum as a low-security patient, James Gordon is the only one who truly understands who – or what – they’re dealing with... or how dangerous the Joker can really be.

In Punchline’s backup story, we welcome new artist Sweeney Boo as Harper Row visits her father in Blackgate, and Cullen Row is exposed to the uglier side of... being a serial killer fan? You’d think that would be self-evident, but no.

There are numerous stories about the first time the Joker entered the Gotham City landscape. Most famously, of course, he first appeared as a violent murderer in Batman #1, and then kind of petered off into being a prankster before coming back full force. The modern iteration of the Joker is really both – the pranking clown, the sadistic serial killer, and the mass murderer joined together into one deranged package – and really he’s greater in this form than the sum of his parts. In this form, he became the most popular villain in comics – a malevolent force that exists in counterbalance to Batman’s heroic stature.

But despite his dominance of the media landscape, the question of his motivation, his sanity, his “self” hasn’t been looked at very often. This is purposeful really – starting from The Killing Joke at least, there has been a preference for portraying the Joker as a mystery with no definitive beginning or end. But it does raise some questions, doesn’t it, the most obvious being… what is his deal?

Much has been said about the fact that this book is about Jim Gordon more than the Joker, and that’s true, but it does nonetheless center on the question of the Joker. We focus on him not close up and personal but through the observations of one of the world’s great detectives as he tries to piece together the Joker’s nature. What is the Joker like when he doesn’t have an audience? Can you imagine him making breakfast? Can you imagine him straightening out his apartment?

The Joker #5 brings us back to a time when the Joker’s nature was even more mysterious than it is today. Shortly after his earliest attacks, he has been declared legally insane and is being transferred to Arkham Asylum – a fact which galls the young Jim Gordon who recognizes what no one else does: that the Joker is not insane – he’s a manipulative showman but he isn’t “crazy.”

Then again, even if he’s not crazy, does that mean that he’s sane?

It’s a rare treat to see this kind of story – stories that take place early in Batman’s career without being about Batman. Stories that show us how Gotham evolved from the mob haven it was to the monster lineup it became are a little more common but rarely focus on aspects other than Batman’s interactions with the mobsters, and the monsters. Here, we’re able to see an Arkham Asylum that had not yet fallen prey to the sickness of its patients firmly situated in a Gotham that is not yet hell on Earth. Still, there are signs of what’s to come everywhere as well. Watch Jeremiah Arkham’s face and you’ll see how eager Gotham’s darkness is to strike.

As backstory chapters go, this one is excellent – Matthew Rosenberg and James Tynion IV make for a formidable team, and there is simply no way to express how much I love Francesco Francavilla, especially when he’s in full command of the artwork, including the colors, as he is here. The colors are spectacular here – a simple but impactful mix of yellows, blues, and greens that makes Gordon pop out of the frame with his red hair. The blood splatter stands out, too… but I’ll just let you find out for yourself how that comes up.

In our backup, we must sadly bid farewell to previous Punchline backup artist Mirka Andolfo, with new backup artist Sweeney Boo stepping in, as well as taking on the coloring. It makes for quite a change – where Andolfo’s artwork reminded me of shoujo manga, Sweeney Boo’s is perhaps more reminiscent of western animation, and the lush coloring adds to that impression.

Now Punchline has emerged from the infirmary to much celebration from the inmates who have now been freed from their place beneath the old Queen’s royal foot. Meanwhile, the search is on for Punchline’s deeply endangered ex-friend Kelly Ness… who is currently imprisoned in Blackgate along with Punchline herself.

The chapter itself is somewhat transitional, but with exciting implications going forward… especially once you reach that last page.

Our lead story is an intriguing look at a Gotham City just on the cusp of becoming the nightmare we know... with the Joker’s arrival is the harbinger of what’s to come. If you enjoy backstory, this is the issue for you. Besides, anytime you get Francesco Francavilla on a story with Gordons in it you know you’re in for a good time... assuming your understanding of fun matches mine.

The Punchline backup is a transitional chapter with a focus on the characters and setting up their next moves. Solid story with beautiful, clean artwork from new Punchline artist Sweeney Boo.

The Joker #5: The First Dark Cloud On The Horizon