The Joker #7: Alliances Old and New 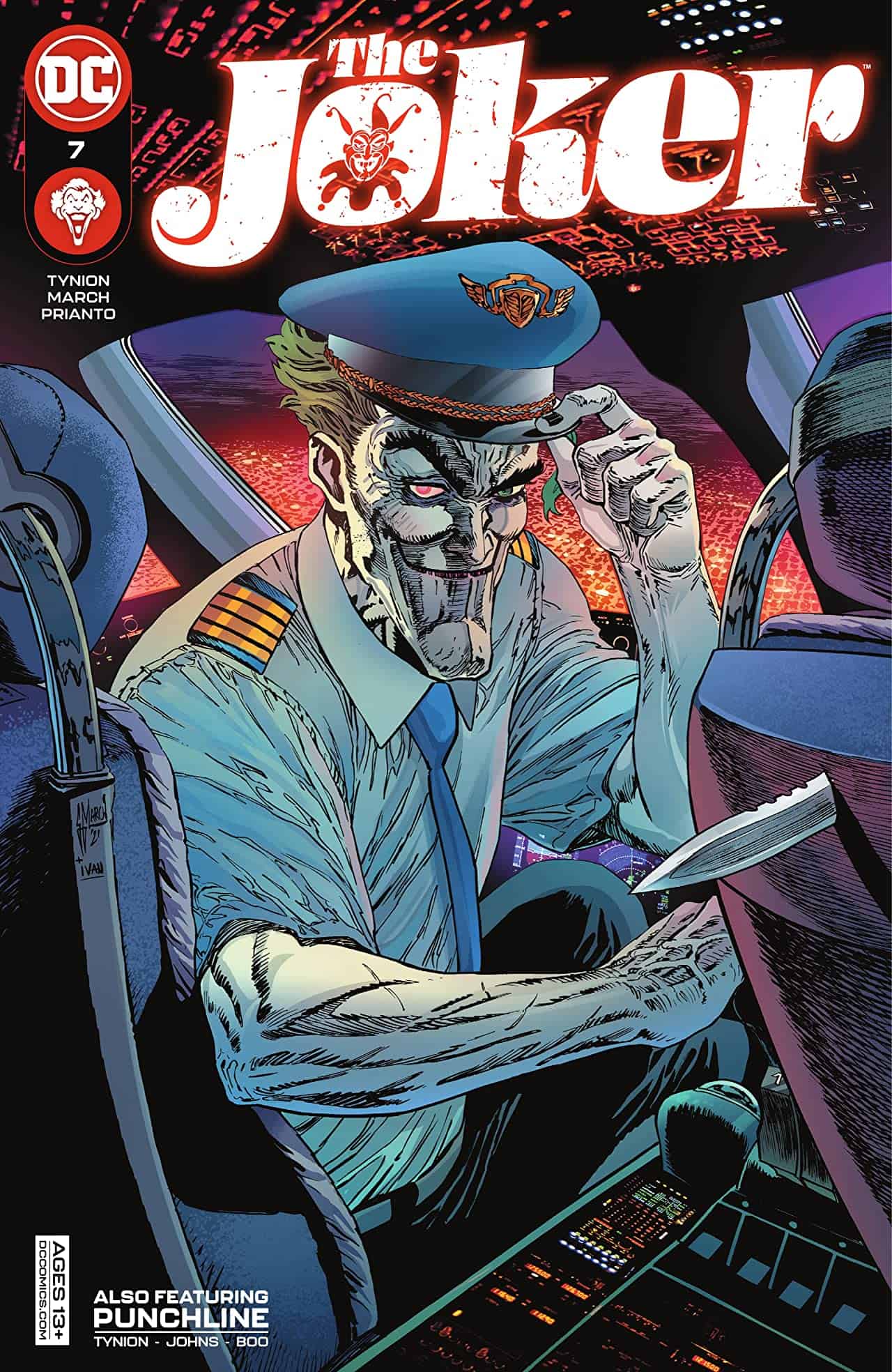 The recently arrested Jim Gordon finds himself in the custody of Chief Detective Isabella Hallows. She is currently investigating a series of murders with evidence implicating Gordon himself... but as any skilled detective would guess, there is more to the case than meets the eye. Meanwhile, Oracle enlists the aid of a familiar not-quite-allied face, prompting the reemergence of an old favorite who hasn’t been seen in some time.

And, in Punchline, Harper Row must dodge Punchline and her gang of inmates if she intends to survive her search for Kelly Ness.

Last issue, we left Jim Gordon in France… and mid-arrest as a suspect in a triple homicide. Now, when we catch up with him, he is several hours deep into analyzing his situation, the behaviors of the detectives involved in the case, and what it is they’re planning to do. He’s an old pro, so he sees through the mind games typical to police encounters – the one-way glass, the crime scene photos – and when Chief Detective Isabella Hallows arrives, he’s ready for her.

Gordon and Hallows’ conversation is fascinating, both in their initial meeting this issue and in the follow-up in another location. Through Hallows, we’re given a rare view of how the world outside the DCU’s United States sees, well, the DCU’s United States. In her eyes, America is all bombast and full of people parading around in tights for no reason. They could just be normal crime lords but no, they have to wear garish masks to do it – honestly just an exaggerated form of the way America is seen in the real world sometimes.

This examination of what the DCU would really be like, how it would actually look and function and how societies would move within it, is a trait common to much of Tynion’s work on the Gotham line since his arrival back in early 2020. Both here and in the main Batman title, he’s been known for creating new characters, new mythology, but many of the best additions are more subtly integrated and often a bit of a no-brainer once you realize what he’s created.

An underground organization that protects supercriminals and illegally clones human tissue to help said criminals fake their own deaths? Well, that would definitely exist, why didn’t we think of that before? People idolizing murderers and getting wrapped up in their charisma to the point of demanding their freedom? Yeah, that’s a thing that happens right here in the real world, so why wouldn’t it happen with someone like Punchline – a charismatic and attractive young woman who knows how to manipulate social media to her advantage?

Consider: the first thing we see in Joker #7 is Pena Dura, the fortress-like prison in fictional Santa Prisca where Bane was born and “raised,” if being thrown in a flooding cell for 20 years counts as being raised. With Bane’s recent demise during A-Day, the prison is being developed as a tourist attraction by the Santa Priscan government, and if that sounds horrifying, well, it is. Yet, it’s also believable; murder tourism is a real thing, and you can visit Alcatraz for the low price of $39.90 – children can get in for under $25! It’s pretty grim, a little uncomfortable to think about, but it’s real.

In this case, Tynion brings us into this questionable place alongside what appears to be a potential investor, all sunglasses and glam. But as is often the case in these situations, things are not what they seem.

Keen readers may be able to predict the identity of the woman before she actually states her name… but I’m just going to say this is a character who has been neglected in the Gotham line in recent years, and it’s great to see her back. Also, given her connections to certain characters, the sheer big screen 007 vibe of her introduction is rather satisfying, and camp in all the best ways.

This isn’t surprising; even with his focus on “new,” Tynion has also displayed a deep knowledge of and love for the Batmythos. It’s one of the things that has made his time in Gotham so enjoyable – the mix of the novel and the classic with well-known characters returning to find themselves in the center of this storm of new faces and situations. In particular, the Joker book has split the focus between new additions like Vengeance or the Samson family and established presences like, well, the Court of Owls… whose involvement is becoming both clearer and more mysterious for both the reader and the characters within the tale.

I’ve opined enough about Tynion’s impending departure, so I won’t do so here. Still, I’m glad he’s staying on Joker until April because there’s simply no way he could have wrapped all these threads, or even most of them by, say, the end of this year when his exclusive contract reportedly comes to a close.

My relationship with Guillem March’s artwork has been a little more contentious than the one with Tynion’s writing. Mostly, I’ve just found his women to be overly sexualized in the past. That’s why I’ve enjoyed his work on Joker so much, though –horror-noir features suit his particular style and the plain-clothes focus allows him to portray characters who are sexy without being sexualized.

The variance in narrative tone from scene to scene really allows him to flex his storytelling skills as he pivots from an action film-esque introduction to a procedural atmosphere and back again. He also managed to sell me on Jim and Hallows’ chemistry, although I’m not yet certain whether it’s professional or personal chemistry. Maybe both.

Though I admit I don’t quite trust Hallows – something about her eyes reminds me a bit too much of Cressida.

Moving to the Punchline backup feature by Tynion, Sam Johns, and Sweeney Boo, we find Alexis “Punchline” Kaye and her compatriots on the hunt for Harper Row… who is, in turn, on the hunt for Kelly Ness. Kelly, as you may recall, is an old friend of Punchline’s – one with whom she had some sort of seemingly extreme falling out. Now incarcerated at Blackgate, Kelly is in hiding, living in fear of Punchline’s vengeance, and her influence. The main question is, can Harper locate Kelly and get the two of them out before Punchline finds them?

The Punchline backups are short and sweet – a morsel, one might say. Sweeney Boo’s work is a pastel ice cream dream though whether that makes sense for a Punchline story is kind of subjective. For me, at least, Boo’s art works for me if I think of this as more Harper Row’s story rather than Punchline’s. That is actually accurate anyway, though Punchline herself is far more present in her story than the Joker is in “his.”

Either way, both features are stories in the shadow of their namesake rather than stories about said namesake…. which seems appropriate for a villain-led feature because really, while villain protagonists are valid, how do you do a book about the Joker and his girlfriend without filing down their teeth?

Joker #7 combines the horror, crime, and action genres and stirs them into a delicious mix of new and classic characters to create an irresistible fictional feast. This happens basically every single month, and if you’re not reading The Joker, you’re absolutely missing out.

The Joker #7: Alliances Old and New