The Joker #8: The Birth of Vengeance 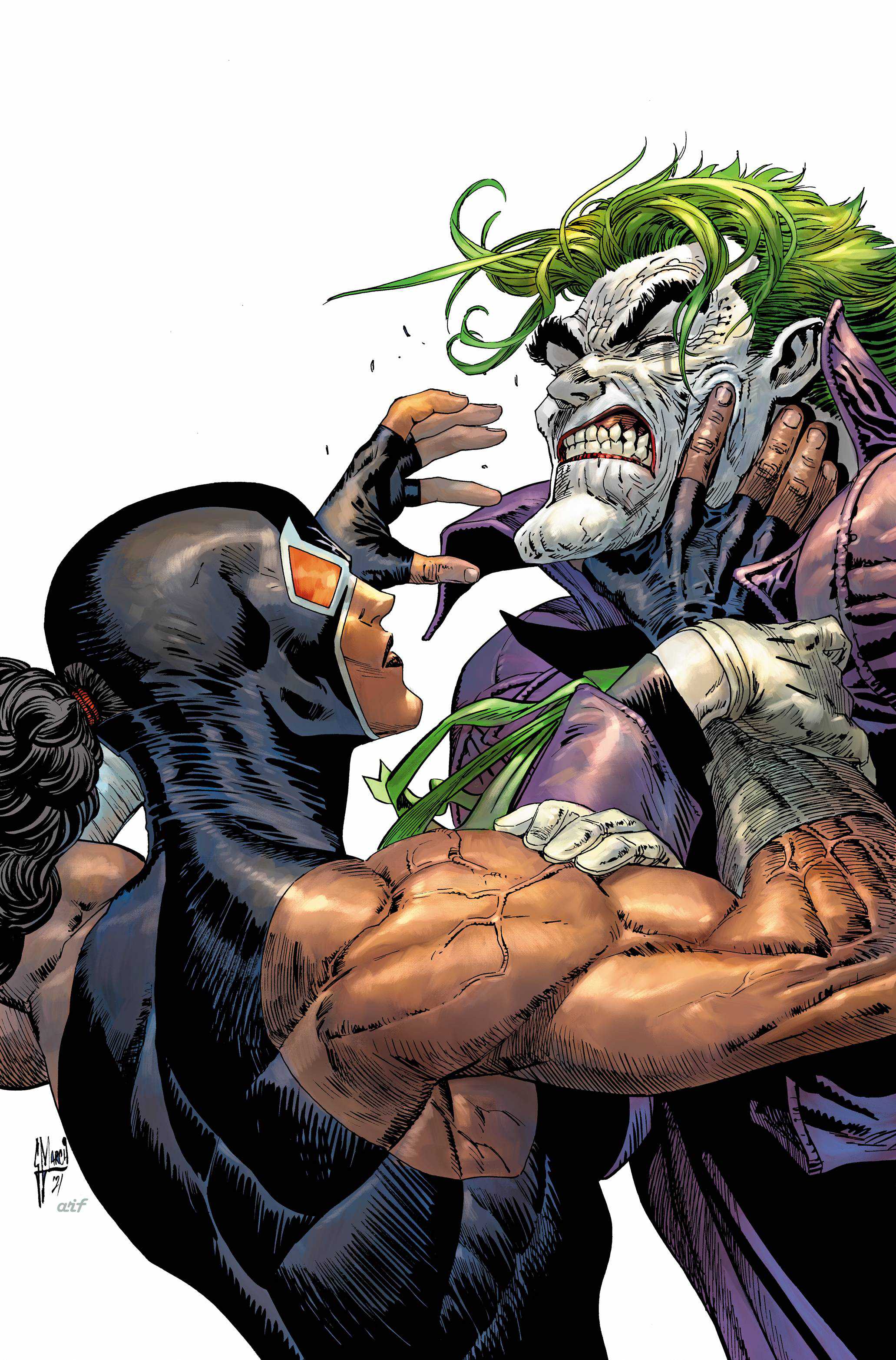 A-Day devastated Arkham Asylum and left several powerful families and factions without their most prominent members. Given that, it was perhaps inevitable that those factions would act in pursuit of revenge. In The Joker #8, the spotlight falls on one of the instruments of one of those factions, Vengeance, Daughter of Bane. Who is she? Where did she come from? Is that moniker literal? All good questions and here is where we find the answers, as her story is now ready to be told.

And, in Punchline, Harper Row has located Punchline’s former best friend. The question is, can she keep them safe from the titular supervillain?

Generally speaking, it isn’t the best idea to declare that no one can know what you’re doing if you’re doing the thing in, say, a public restaurant. This is a lesson that Jim Gordon’s new detective friend Isabella should have learned years ago but here they are, interrupted in mid-alliance-talk by Vengeance, the agent of Santa Prisca’s revenge against the Joker for Bane’s death. Or so it seems.

Because really, her full title, as referenced in newsletters and news articles, is Vengeance, Daughter of Bane… but did Bane even have a daughter? Who is Vengeance, exactly, and why is she pursuing the Joker and interrupting Jim Gordon’s coffee date?

To date, she has been an enigma, so, unsurprisingly, that answer is more complicated than we may have expected. Vengeance, like Bane (and arguably any person emerging from Santa Prisca given its portrayal within the DC Universe), has a dark and admittedly tragic history that matches and accounts for her sheer brutality… but unlike Bane, her own emergence as a villain of sorts has been recent, and so she lacks his sheer body count, or the number of his crimes, which may make her more redeemable or at least more understandable to some. Of course, in exploring her, we learn something new about Bane as well, which clarifies one of the stranger points of his origin… and that, too, may make his status as a villain more tenuous.

The lead feature more or less belongs to Vengeance this month – her tragedy, her confusion, her anger, they’re all stark and incredibly human, which makes for a bit of whiplash when she unleashes on enemies. I keep saying this but Guillem March is fantastic on this title and never more so than when he’s portraying Vengeance in all of her brutality and power. She is, in short, truly a force to be reckoned with. Breaking enemies and their vehicles and it’s just a wonder to behold. Maybe it’s because I’m the sort of person who enjoys watching a powerful opponent mow down armies, or maybe it’s because it’s still relatively uncommon to see a female character depicted his way, but I rooting for her to survive and thrive in the DCU long after her role in The Joker has come to a close. Though she may need a new codename and costume, not to mention a new goal because there’s no way DC is going to allow any of these characters to kill the Joker.

Our backup Punchline feature continues to follow Harper Row, who has successfully infiltrated Blackgate and located Punchline’s former best friend, Kelly, who is currently hiding in an unmapped part of Blackgate for fear of Punchline’s ire. The good news for her is that she has a powerful ally in Orca, who hasn’t truly joined Punchline’s cultlike following – at least not in her metaphorical heart. The bad news is that Punchline seemingly runs the entire prison at this point which, by the way, is odd. I mean, I’m wondering about that and how believable it really is.

Regardless, the artistic team for this chapter is Rosi Kampe and color artist Marissa Louise, and they do well with it. Sweeney Boo’s pastel creamy art, while beautiful, has always struck me as a slightly strange fit for Punchline, whose initial appearances made her so edgy and harsh. Kampe’s dynamic style is more along the lines of what I would have expected for a Punchline feature, and it is effective in that role. There’s something to be said for bucking expectations as well, though, so it’ll be great to see Boo’s return as well.

Either way, this chapter serves as a transition into the next portion of the story as Harper attempts to get Kelly to safety… which could mean committing a few crimes of her own. I’m excited to see where this is going because, while I have enjoyed the Punchline feature, I was sneaking up on the limits of my interest in women’s prison hijinks. This next part, therefore, should be refreshing… even if only for the change of scenery.

After months of teasing, The Joker #8 finally gives us answers about Vengeance, one of the more intriguing characters hunting the Joker of late... and the story is more compelling than I ever would have guessed.

When it comes to Punchline, I’m excited to see the characters on the edge of a new phase in the story. ...I do really want to know what is going on in Blackgate though. If you read this chapter, you’re probably going to end up wondering, too.

The Joker #8: The Birth of Vengeance