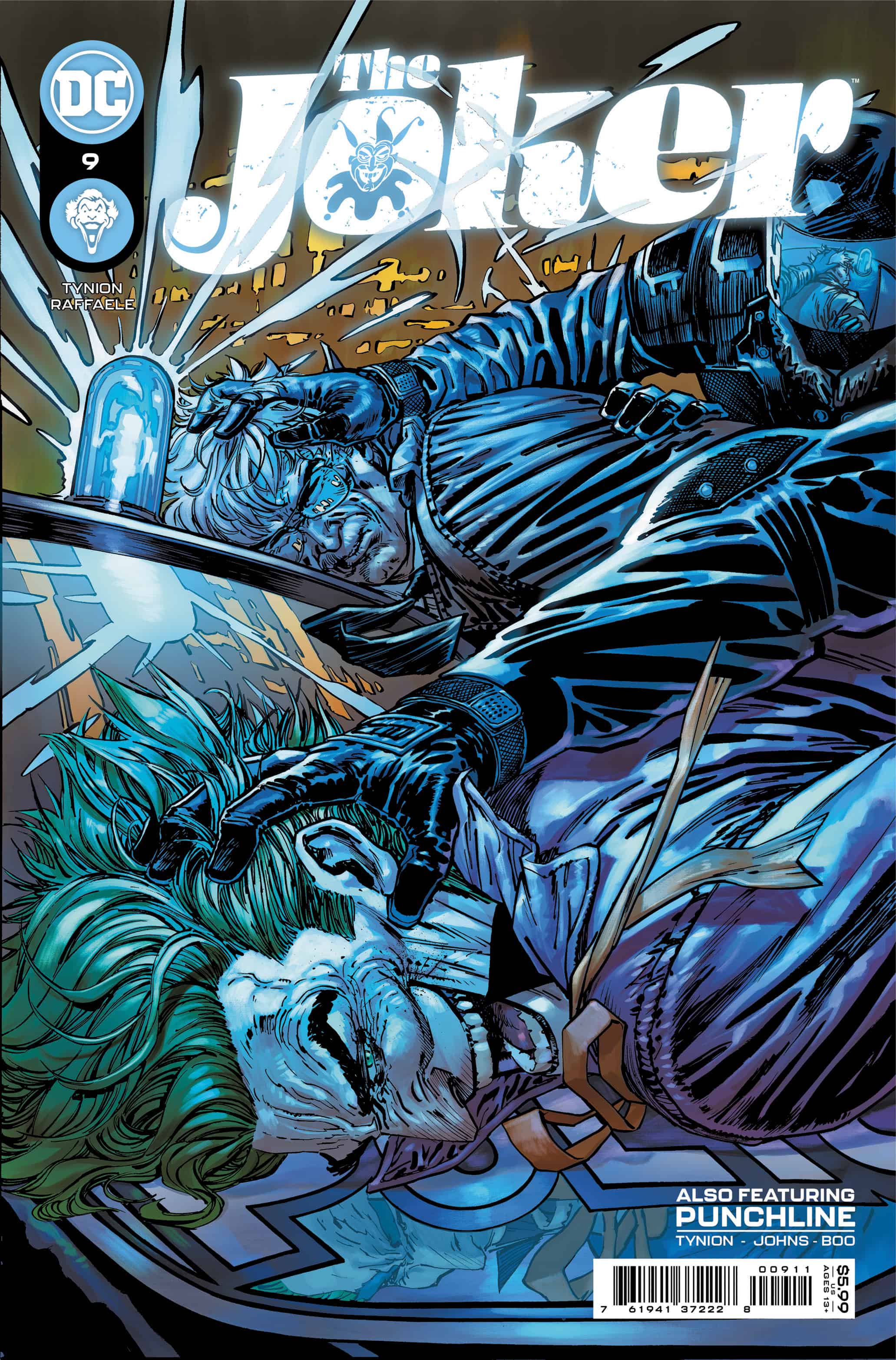 In the wake of his meeting with Vengeance, Jim Gordon must decide the way forward: does he give her the fuel she needs to complete the task she was programmed to perform or is that crossing too many moral lines for this ostensibly good man? He may not have to decide as soon as he thinks, as his and Vengeance’s road trip to the Joker’s hideout soon brings them into a far more dangerous situation than he could have anticipated, ultimately placing both of their lives in jeopardy.

And in the Punchline backup, Harper Row has managed to escape Blackgate with Punchline’s former BFF, Kelly... allowing some very interesting information to come to light about Alexis Kaye in her pre-Joker years.

When speaking about the difference between his runs on Batman and The Joker, James Tynion IV has always been realistic about for whom each title was written and what reaction he could expect to receive from which demographic for his efforts. Batman, he said, was written to attract new readers who would be drawn to the opportunity to get in on the ground floor of the new characters introduced during his run. With that goal in mind, he expected Batman to sell better but to be somewhat more controversial with old-school fans who were used to Batman’s flagship title behaving in a certain way.

The Joker, on the other hand, he presented as his big fanboy book – his continuity deep dive – and more in line with the traditional perception of what a Batbook would be… and thus more likely to be well-received by old-school readers. And it was.

The Joker #9, not unlike #8 for that matter, exemplifies this approach. It is, start to finish, a continuity feast, beginning with Gordon’s recounting of his own family’s history with the Joker from torture to murder and back again. This is all part of the process through which Gordon assesses his path forward – can he do as Vengeance asks? If she is a gun, can he turn his anger and despair into the bullet and the gunpowder she needs to take down the Joker on her own terms? To do so is tantamount to conspiracy to commit murder but at this point… does he really care?

We explore this question! And along the way Tynion and guest artist Stefano Raffaele stop to fill in some “how did we not think of that” gaps in the mythos as they take us on a tour of the underside of the DC Universe. And boy oh boy is it a dank mess down there.

Of course, some of this was to be expected. We’ve seen in recent months that Vengeance is a laboratory-grown “replacement” for the wild and willful Bane, brainwashed from “birth” to obey her creators. We’ve also found out that Bane himself was a prototype of this kind of conditioning – programmed to fixate on, and eventually break, Batman, though he never realized this was the source of his animus. Connected to this through the labyrinthine ties of the underground network that supports supervillains and other megacriminals is a “human farm” of sorts. Initially presented as a way to produce clone bodies to assist villains in faking their own deaths, here we learn a bit more about their operations and it is… grim to say the least.

The representative of this “network” is expertly portrayed by Raffaele as a Robert Durst-like ghoul of a man with burning eyes and an unsettling presence that raises the hackle at first sight. He is, in short, someone capable of sharing a pleasant tea break with the Joker, which is exactly what he’s doing when he enters the plot. Of course, I won’t give away what comes of that, but suffice to say I find him somewhat more unsettling than the Joker himself.

Tynion may be on his way out of the Batcorner, but his time there has been remarkably effective in terms of spinning new mythology, and I think that’s likely going to be his legacy. I’m not sure whether Jim as a retired officer will stick or if he will instead end up returning to the commissioner position in time (probably the latter, comics being what they are) but things like the supervillain support network have immense potential left to be exploited. I only hope they don’t go the way of characters and organizations like the Underbroker and Mirror House – ideas that should have had legs but ended up sort of falling by the wayside, at least to date.

I mentioned earlier that this issue features a guest artist, Stefano Raffaele, and I have to say his work is beautiful. Stylistically it is something of a midpoint between Guillem March Francesco Francavilla, which sounds like it should be a disaster, but it most assuredly isn’t. Instead, he brings a touch of March’s exaggerated drama and a touch of Francavilla’s noir grounding to make something uniquely his own, and I would love to see him continue to show up around the Batbooks because his style is perfect for Gothamites and associated characters.

Moving on to the Punchline backup! When last we met, Harper and Kelly had just barely managed to escape Blackgate as Alexis “Punchline” Kaye slipped into her leather miniskirted battle regalia. Now the escapees have arrived at Leslie Thompkins’s home, where Kelly regales her saviors with some rather concerning backstory on Punchline, including what she was up to in high school… which turns out to be just about as bad as what she was up to in college.

This is a treat for me since I went into the Punchline backups way back in The Joker #1 hoping to learn more about Punchline herself. It’s been interesting to follow Harper, a character I wasn’t especially familiar with before this series, there’s ultimately no denying that I read Punchline for, well, Punchline. This may seem obvious but actually, it isn’t since I’m much more interested in Gordon than the Joker in the lead feature.

Regardless, Punchline’s backstory isn’t especially surprising, but that’s a good thing – it means her character has been well, and consistently, portrayed enough that the reader has long had a sense of who she is, and where she comes from. It helps that her creator, James Tynion IV, has previously referred to her as—

Well, let’s just say some revelations are more like confirmations.

Rosi Kampe’s work here is really strong and if I’m being honest, I do think it vibes a bit better with the themes than either of the regular feature artists have done. This isn’t a slight on Sweeney Boo or Mirka Andolfo, both of whom are absolutely top-notch artists; it’s just that, as I’ve said before (maybe even ad nauseum) their work always struck me as little too shoujo, too soft, to really capture Punchline’s sharp edges. Now that said, despite being called Punchline the story isn’t really about Punchline and their styles do meld rather well with Harper but… this is a long and winding way to say Kampe’s work seems to fit both bills which are important in chapters that get more into the dirt of Alexis Kaye’s twisted mind.

The Joker #9 gave me the willies in the best possible way, showing the depth of the darkness that resides in the shadow of the DCU’s brightest lights... with implications that, if well-handled, could resonate throughout the DCU as a whole for years to come. Also? Some visuals I’ll never forget. Altogether, another excellent issue.

Meanwhile, Punchline delves into what we’re all here for – or, well, what I’m here for anyway: Punchline herself. It is an examination of who she is and where she came from. While it does not unlock a full understanding of her psyche, that is perhaps to be expected... because someone like her can only ever be a puzzle to people who aren’t violent sociopaths.

Excellent issue all around. Can’t wait for the next one.