The Magnificent Ms. Marvel #4: Tell Your Own Story 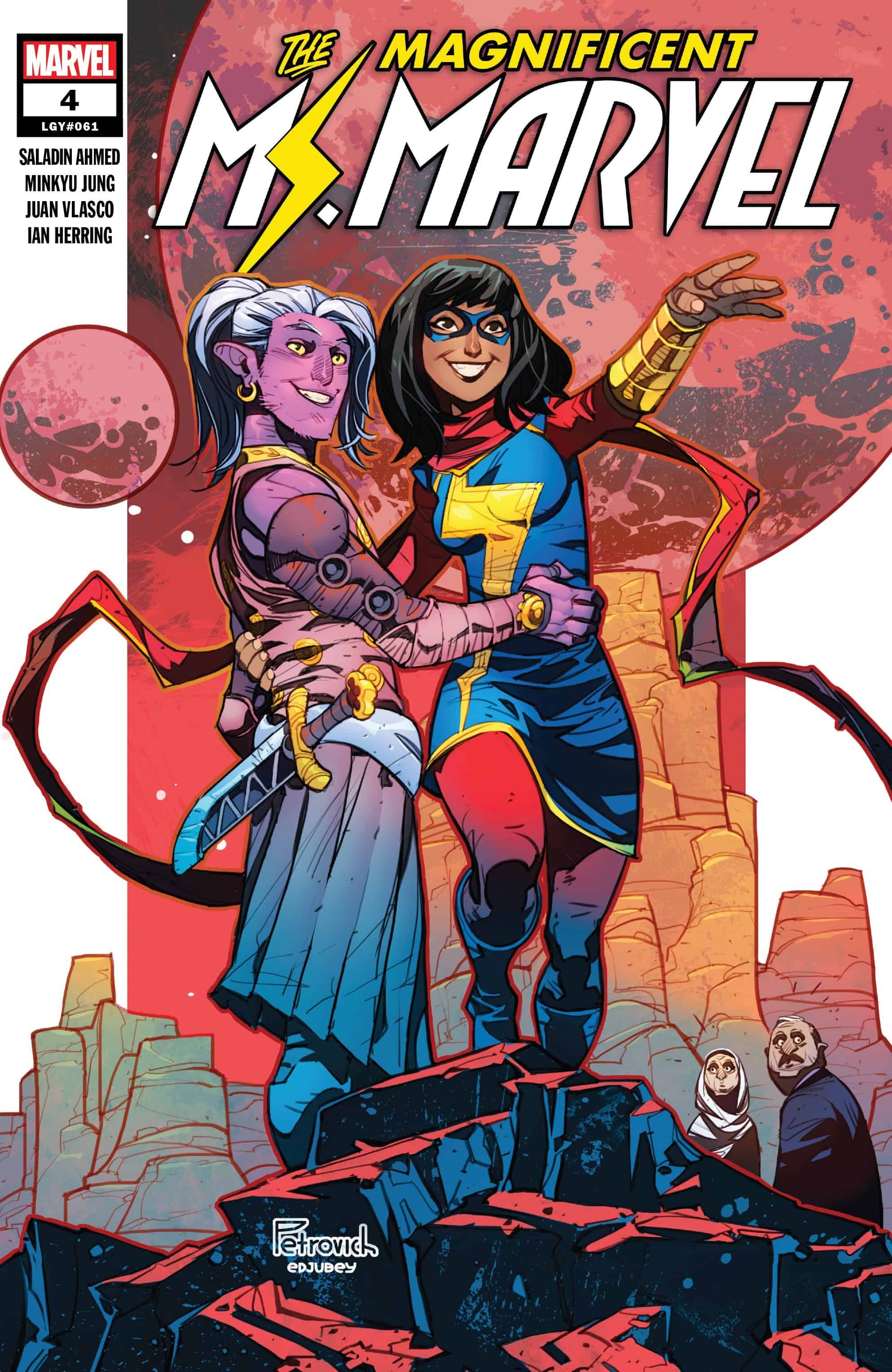 Traipsing across an unfamiliar planet with a gorgeous alien prince is fun…but doing that with your disapproving parents in tow? Significantly less fun. Can Kamala balance family and romance? Or is this strange new relationship dead on arrival?

The drama worsens for Ms. Marvel as she is stranded on an alien planet with a particularly handsome prince and her loving parents, but if Kamala can’t take control of the situation and truly speak for herself, she could soon find an entire civilization in need of her help. 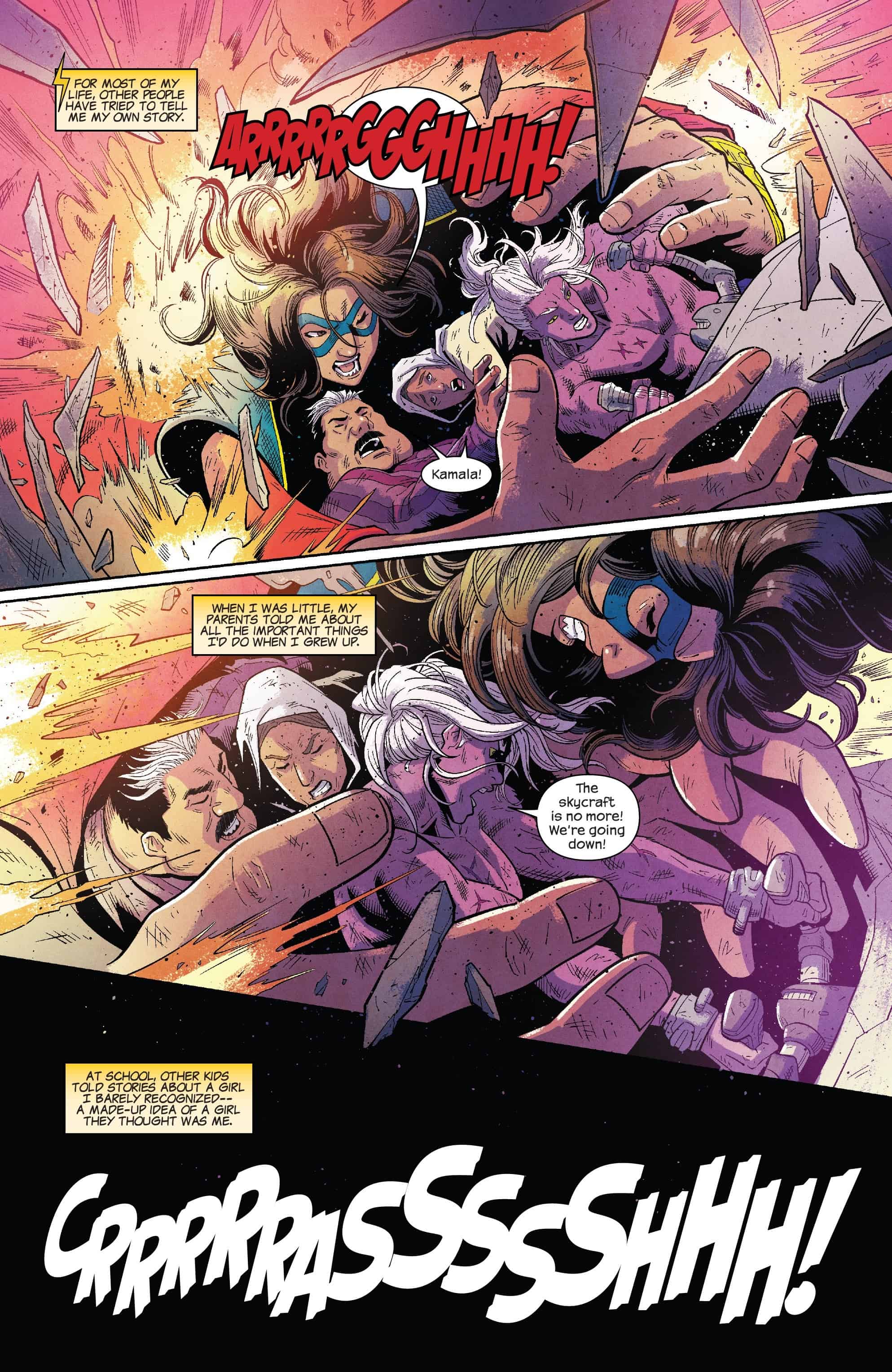 The Magnificent Ms. Marvel #4 is a character driven otherworldly story that expertly explores the struggles of finding our own individuality when surrounded by the expectations and input of those around us. As Ms. Marvel continues to learn about her role as the “Destined One” on an alien planet, we find her in a situation where she must look inward to become the leader that so many need her to be. This is a story about finding inner strength amidst turmoil, and boy is there plenty of turmoil for Kamala Khan!

As if being stranded on an alien planet and forced to help a dwindling rebellion achieve their freedom wasn’t difficult enough, Kamala is also trying to cope with recent revelations in her personal life as well. Seeing her father with another woman and questioning her relationship with her best friend Bruno has created conflict and doubt for Kamala that has really only made this situation worse. It’s this emotional roller coaster that makes The Magnificent Ms. Marvel #4 such a great read.

Let’s face it, this is a story at face value that we have seen before. Whisked off to a foreign land and thrown into a societal conflict at the transition of power from father to son is a story that has been told many times over, but that isn’t what this creative team is getting at. The spectacular story serves as a foundation for which they can explore Kamala’s individuality separated from the influences her every day life. And the depth of character that is revealed from this situation is ultimately where this issue succeeds most.

The artwork mostly helps the story by providing some grand visuals and complex expressions. The colors are once again uniquely enjoyable and help the overall artistic direction to remain distinctive. However, the background work is noticeably lacking. There are a few too many panels that completely skip the background or simply opt for a solid color. While I understand what leads to these types of situations (deadlines mostly), it is unfortunate because the alien planet offers so many opportunities for great backgrounds.

With the fight now bearing down on Ms. Marvel and her parents, it looks like things have taken a turn for the worse. While we will have to wait to see what the future holds regarding their forthcoming epic battle, The Magnificent Ms. Marvel #4 offers a truly enjoyable look into the personal conflict Kamala wrestles with just by being the hero she is.

'The Magnificent Ms. Marvel #4' is a character-driven otherworldly story that delves into the complexities of finding and expressing our own individuality. Fans of Ms. Marvel will undoubtedly find a lot to enjoy here.

The Magnificent Ms. Marvel #4: Tell Your Own Story