The Many Deaths of Laila Starr #1: Death Takes a Non-Holiday

The Many Deaths of Laila Starr #1 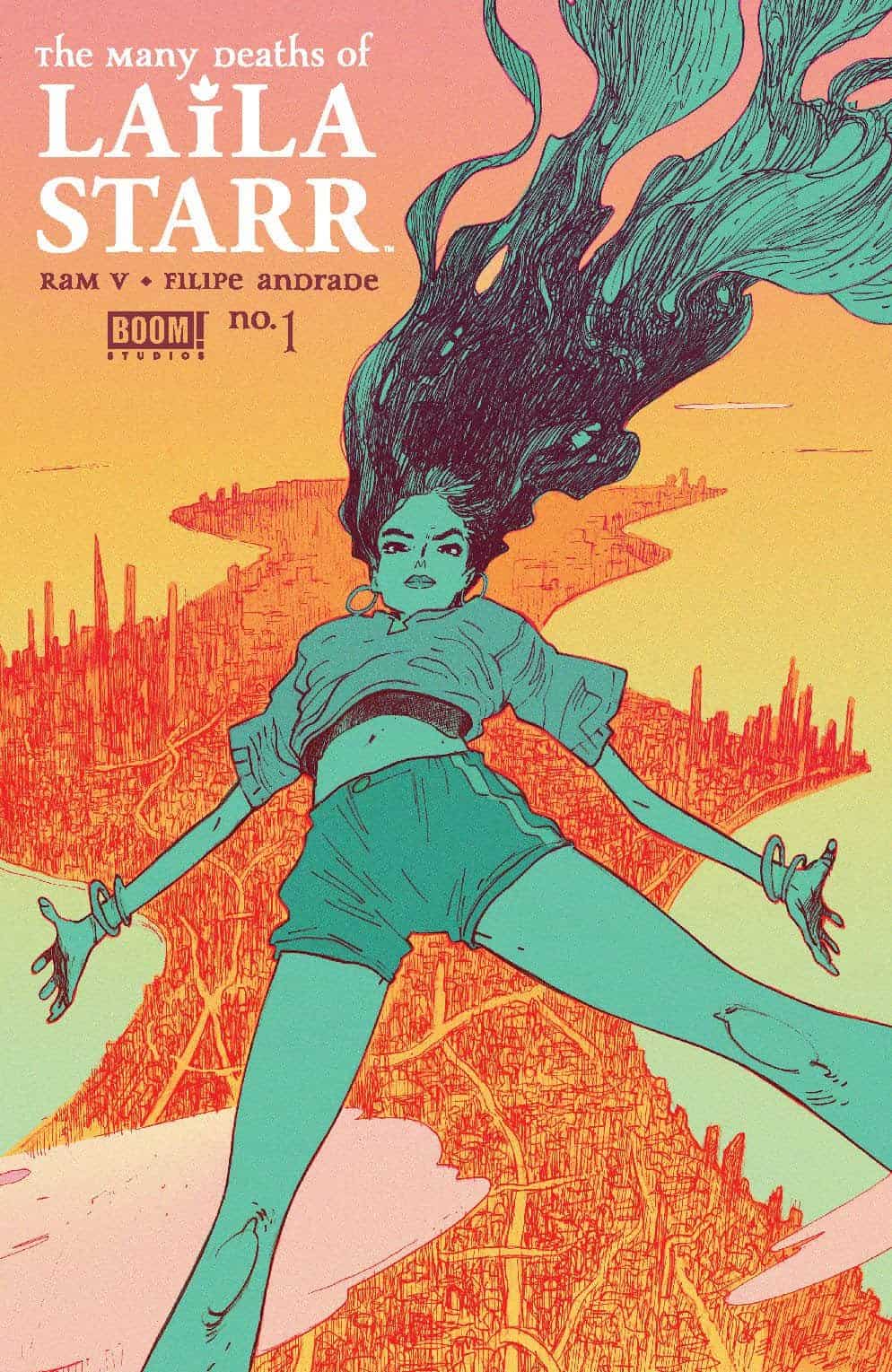 They say things come in threes, and maybe that’s true. Case in point: a newborn baby, a newly graduated university no-longer-a-student, and the newly unemployed goddess of death. These are three individual existences with their own individual paths. They are also currently careening toward a collision with one another, and with destiny, that seems set to change everything about life, death, and everything in between.

A car makes its way through the crowded roads. Inside, Mr. Shah drives, trying to avoid both a collision and his wife giving birth inside the vehicle. Their child will change the world.

Nearby, a young woman sits in an open window on the sixth floor of the building where her class has gathered for a last hurrah. She’s smoking a cigarette and ignoring the classmate trying to hit on her. A moment later, she’s plummeting mercilessly from the window to the ground.

Elsewhere, the goddess Death is fired from the position she has held for eternity. With her dismissal, she is sent to Earth to live out a mortal life. She awakens housed inside the no longer dead body of a woman who only recently fell from a window and landed on the pavement outside her class’s last hurrah party.

These are the pieces, people, and forces of nature populating the pages of The Many Deaths of Laila Starr, the new creator-owned project by Ram V (Catwoman, Blue in Green, Justice League Dark) and Filipe Andrade.

It’s odd to think about now, but just over a year ago I’d never heard of Ram V. Admittedly that year took place primarily during 2020, which was at least fifteen years packed into the space of one. Even so, it’s remarkable how quickly he climbed the ranks of not just my favorite writers but the industry’s favorite and busiest writers, once we all wised up and took notice.

Part of that is his absolute command of language.  V’s writing is beautifully fluid and poetic, elevating the stories and the characters and lending them an epic quality that nevertheless manages to avoid feeling labored or pretentious. This makes reading his work an absolute pleasure, but it also allows him to draw out the humanity in the mythic and the mythic in humanity.

This ability is on full display in Laila Starr – not only that, it’s part of the story. Becoming human changes our goddess, and her inability to maintain an absolute separation from humanity when she has become part of humanity affects the direction of the plot in ways that have yet to be fully revealed. On the opposite end of the spectrum we have Darius, the newborn baby whose life has triggered cosmic change even before said life has truly begun – a tiny human child with the power to alter the gods themselves and change what the world is, and how it works.

Life. Death. Rebirth. It’s some potent stuff, but it is carried easily enough on V’s back.  Of course, shouldering the story at his side is Filipe Andrade, whose unique style is perfectly suited for this unique title. Andrade’s work is exaggerated, stylized, and stunning. His ability to convey character through body language and design is impressive enough but even more than that, his storytelling is just exceptional – at times you can nearly follow the plot from his imagery alone.

Accompanied by color artist Ines Amaro’s palette of blues and violets, yellow and tangerine, Andrade brings a sense of elevated reality to the book that works in harmony with V’s wordsmithing. It’s the perfect formula for a story that lives in that difficult to capture magical realism realm and I’m loving every second.

It’s a rare book that I would consider essentially perfect. If you’ve read my reviews in the past you may know I tend to skew high on my ratings — that’s because rating isn’t something that comes naturally to me. It’s easy to say that something is bad, good or great, but it gets dicey when deciding whether a book is good or very good, very good or great. And is an 8 good or very good?

In this case I’m not really struggling. The Many Deaths of Laila Starr is something special – and so is each member of the team, both as a whole unit and as individual creators. Andrade and Amaro have landed on my creator watch list from this issue alone, which almost never happens.

Long story short, from the first panel to the last, this book is just stunning, and I wouldn’t change a line.

A remarkable beginning to what promises to be a remarkable series, The Many Deaths of Laila Starr tackles life, death and what it means to be human.

Wake up, don't sleep, you do not want to miss out on this one!

The Many Deaths of Laila Starr #1: Death takes a non-holiday