The Many Deaths of Laila Starr #2: The Knowledge of Crows

The Many Deaths of Laila Starr #2 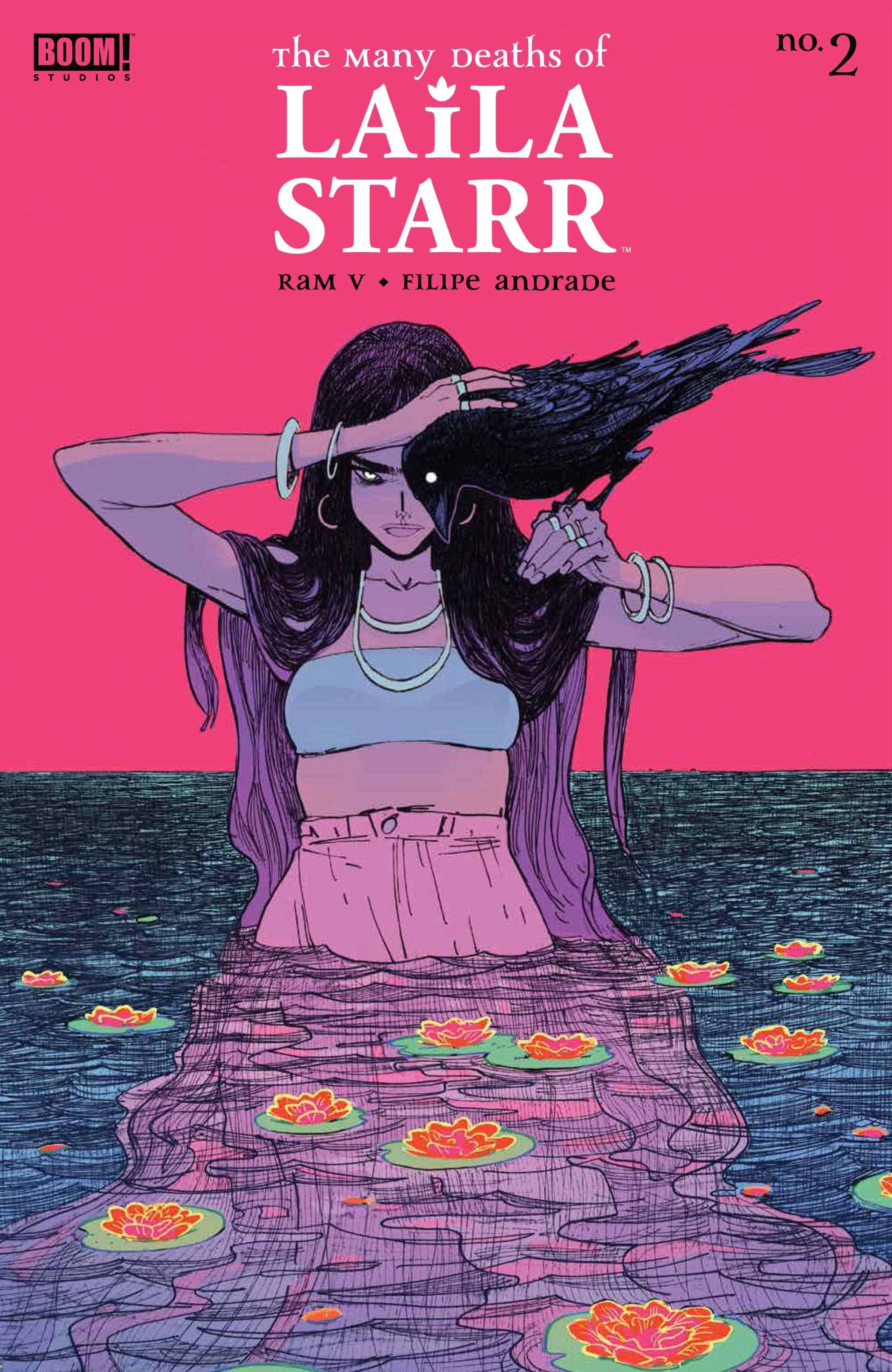 Eight years after her second death, Laila Starr (kind of) is back on her feet, thanks to the God of Life, Pranah.  In her absence, the newborn she wanted to kill but could not has grown into a healthy, sweet-natured eight year old and, well, the world has just kept turning. Now she must adjust to her new situation, thankfully with the assistance of a funeral crow. Meanwhile, Darius is too young to understand injustice, oppression, loss. But unfortunately, even a child who will one day put an end to Death, must confront it first.

Also if you’re wondering what a funeral crow is, well, read it and find out.

When last we visited with the weird and wonderful world of The Many Deaths of Laila Starr, the recently downsized goddess of death had been reincarnated into the body of a deceased woman named Laila Starr. Now mortal, “Laila” immediately sought out Darius, a newborn destined to one day invent immortality and, thus, the cause of her termination. Her intent was to simply kill him and get her job back, but… well, a goddess collecting a soul is nature, but a human killing a newborn is just murder. She couldn’t do it. Unfortunately, she was also rather bad at being human and died pretty much immediately, only to wake up 8 years later, having been resurrected by Pranah, the god of Life…

And so we rejoin her, sitting on a rooftop, talking to a funeral crow. Two grim reapers, facing the skyline of Mumbai. It’s perhaps inevitable that they form a small alliance, with the much more experienced and worldly crow, Kah, serving as Laila’s guide as she tries to adjust to her new reality.

Of course, in the time she’s been going, the world isn’t the only thing that’s changed or moved forward. Darius Shah has also aged. He’s a boy of eight years old now, learning about the world for the first time.  Most notably, the subject with which The Many Deaths of Laila Star has always danced: death. As I often say, I won’t give it away, though in this case I’m leaving out information less because it’s a twist (it isn’t) and more because it deserves to be experienced first hand. Darius’ story, the tale of who he is up until now, when he’s 8 years old and about to have quite a fateful encounter indeed, reads like modern mythology, with a feeling of haunting inevitability hanging over every word and every panel.

It’s ironic, in a way, that this feeling – that inevitability – is present in a series where even death is fallible, and perhaps conquerable. Then again, maybe it isn’t as ironic as it first appears – as much as Laila Starr calls attention to those old and seemingly unbreakable things, it calls them into question as well. Many of these questions are raised through Darius, who hasn’t yet become complacent and accepting of injustice or loss. Some, however, rest with Laila who, after all, is a child to the world in her own way, too.

Ram V’s writing is elevated, elegant, and just beautiful.  I have no idea how he’s able to make me love characters with so few words, such short appearances, but he does it every time. He is able to evoke their nature, their character, the weight of their history, quickly and precisely… and he’s able to do so in ways that feel effortless, natural. You feel with them, you journey with them and if you must, you grieve with them. This happens in every one of his books – it never fails. Laila Starr is no different. Laila is fascinating, and I have a feeling that Darius is about to become a truly remarkable person.

Of course, when it comes to comics even the best writer is helpless without an artist as a partner in weaving tales. I can’t say enough about Filipe Andrade’s artwork – it’s unique, fresh and perfectly suited to the book.  It’s obvious that Andrade’s work is stylized, of course, but what’s less immediately evident is the way the artwork reflects the perspective and perception of the point of view character at the time. If a point of view character perceives another as larger than life, then that person is drawn exactly that way – infinitely and impossibly large. The layouts are highly structured but ever changing, panel arrangements pulling the different threads together – Laila’s panels will tend to vary in size and width, though always maintaining a strong, structured foundation, while Darius’s POV is primarily in page width long but vertically short panels that lend his parts a storyboard feel – fluid and well-choreographed.

Finishing off the book we have the expert stylings of letterer group AndWorld Design and Ines Amaro’s phenomenal color artistry. As strong as the script and artwork are, it is Amaro that brings it all together. A city can sometimes be carelessly depicted as “any city,” but not here. In Amaro’s hands, Mumbai is bright and alive with a uniquely vibrant palette mixed with pastels and some jewel tones – slightly fantastical but still pointedly, and particularly Mumbai. Meanwhile, the lettering – front typeface to placement – merges into each panel, becoming one with the artwork, and the story’s flow.

I said last month that Laila Starr is a near perfect book, and I stand by that. My only complaint is that I have to wait another month before issue three.

The second issue of The Many Deaths of Laila Starr is just as good as the first, and the first was pretty close to perfect. Everyone involved with Laila Starr is operating in full command of their powers, and those powers are substantial. If you haven’t already gotten hooked on this book… what are you even doing with your life?

The Many Deaths of Laila Starr #2: The Knowledge of Crows