The Many Deaths of Laila Starr #3: The Stories of Smoke

The Many Deaths of Laila Star #3 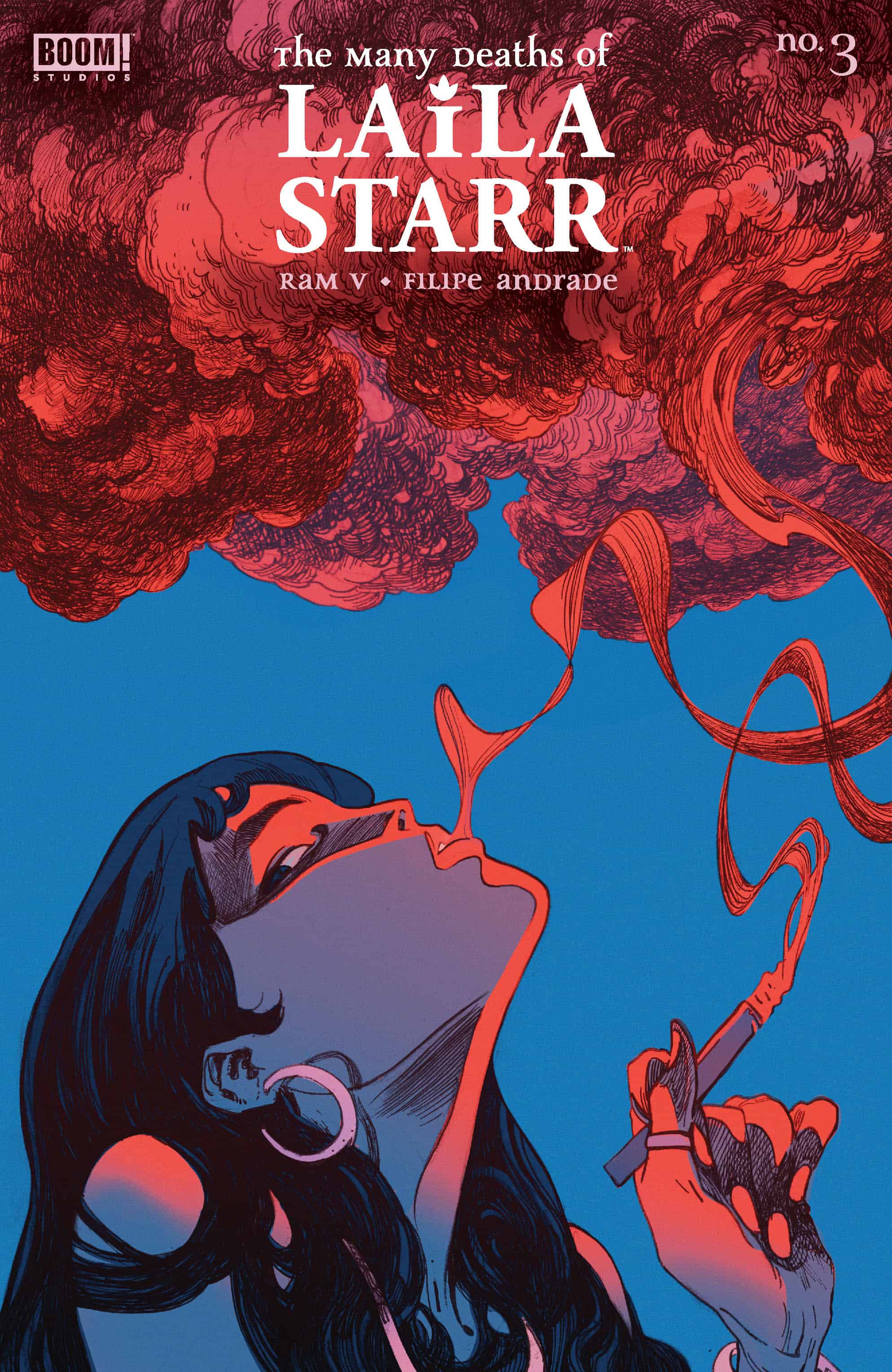 When last we left Laila, she had recently returned from drowning at the behest of Prana, the god of life, who just keeps resurrecting her. Now, deep into the living of life without purpose, she attends a party where the object of her occasional pursuit just happens to be as well. What will come of the second meeting between Death and the boy who will render her obsolete? And what has he seen in the years since his childhood that brings him ever closer to his destiny?

Having survived for some time without another death, Laila Starr (or the deity currently wearing Laila Starr) is living her life, experiencing mortality, and still struggling with aimlessness as one does when deprived of their reason for existence. We catch up with her stretched out on a sofa, smoking cigarettes… and unknowingly in close proximity to the one she has so often sought over the years, Darius Shah.

As for Darius himself, the former infant and former grieving child has grown into a young man who has known both love and loss. In the aftermath of a disaster, one that cost him even more, Darius and Laila have once again crossed paths. So… what now?

To answer the question, our story drifts through dreamy pages and hazy days to a time before, where we learn more of what has made Darius into the man he is – and perhaps more importantly into the man he will soon become. It’s beautiful and silly and profound in all the ways young people’s lives and relationships are, and it has the feeling of those years when life feels limitless and every dream seems possible.

I feel like I overuse the word “fragile” in my reviews, so my challenge for today is not to do that. Still, each issue of Starr is like a crystalline moment both in the life of Darius and in that of Laila herself. Of course, in her case it’s more literally a moment since it inevitably ends with her next rebirth, but as we move through the time we spend with them, we watch them grow and experience and change. The story structure is a bit difficult for me to get a hold on, but that’s not a bad thing in a story that is almost as much meditation on existence as it is plot.

The thing, Starr deals with life and death, the losses that are incurred and how those things change and motivate us… but it’s also about the very nature of being a human being with a body of flesh and a heart that beats. It’s about the way the simple and profoundly complicated change in Death – her transition from a spiritual to a physical body – has affected her behavior and personality in ways she couldn’t have expected and still doesn’t always understand. But it’s also about the way death shapes Darius – the loss of a great godlike figure he knew as a child marked issue 2, and today there is another.

I assume these are the things that drives Darius to become the man who eliminates death – the pain of these losses and the possibilities that disappear with them.

Ram V’s writing is, as always, just stunning – poignant and poetic even when told through the beautifully lettered graffiti on the walls. Felipe Andrade’s artwork and Ines Amaro’s colors are remarkable from the first page to the last.  A look at the opening page along is enough to demonstrate this: 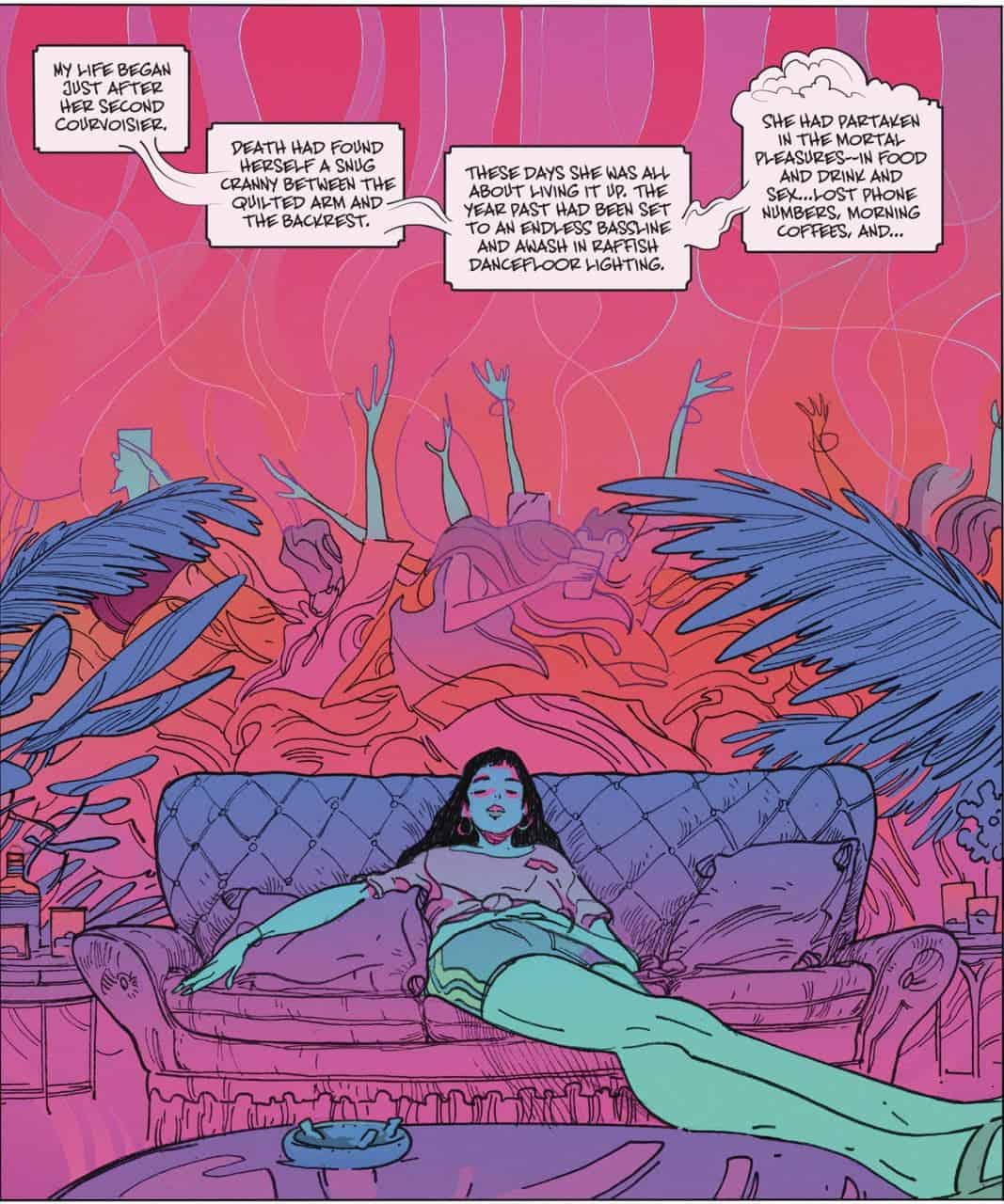 Laila reclines on a sofa. Behind her, a party full of people’s moving bodies are abstracted as they dance – they resemble fire, their hands reaching to the ceiling like tendrils of smoke, all their exuberance and movement melting into a visual blaze. Laila herself is blue in the light, resembling her original, godly form. Later, when she is more human, the colors shift and her skin is warm, hued in gold like the humans around her. She seems to be the same Laila at first, but when she moves the years gone by are reflected in the impossible length of her hair. It’s just. Magic.

Now, I have to say the more I think about it and ponder on the story and its themes, the more I think Darius may not really end death. I’m sure that will pay off somehow, and of course I could easily be wrong and I’m more than happy to say mea culpa. But it’s difficult to imagine that ending coming from the story I’m reading, because more than anything, it tells me that death and life define one another… and that there is value to be found even in loss.

I rarely come across a work so thought provoking, heartbreaking and unique. Poignant without being ponderous or heavy, drawn and colored like a dream, Laila Starr is a meditation on life, death, humanity and loss and how these things interact with and influence one another that sticks with you long after you turn the final page.

The Many Deaths of Laila Starr #3: The Stories of Smoke